I’m still playing this and recently clocked in over 1000 hours. I got cocky and thought I’d do a Last Azlanti (Ironman) playthrough, despite the million-and-one good reasons to never do that.

I made an Instinctual Warrior, basically a barbarian monk. Barbarians have the highest HPs, and the monk part will add WIS to AC. Except the AC is bugged and doesn’t include any racial WIS bonuses, so instead of getting +3 I was only getting +2. (I’m not sure what kind of spaghetti code you would need to ever consider base WIS for anything, but I digress.)

I dropped the water elemental like an old shoe and make it to the final boss, as I have a dozen times before. I built this char to be ranged, because ranged is safer. But I was using a glaive because it just does so much more damage at this stage of the game, and hey, it’s almost ranged right? I drop the boss fairly easily and then the second phase of the fight starts where she summons the quasits.

The cool thing about Wrath is newly spawned adds will randomly focus on the MC regardless of positioning. This makes Regill’s intro quest with the gargoyles particularly deadly. So Hosilla and the quasits all focus my MC. Seelah, Camellia and Lann can’t roll above a 5 on their attack rolls for two whole rounds. Eventually Hosilla hits me for 34 points, bringing me to the low single digits and then the quasits put me below zero. But the quasits also poison. I roll a 1 on my Fort save and take 1 DEX damage. Apparently when you’re negative HPs your DEX is 1 so this lowers my DEX to 0 and I die.

I thought the whole bullshit experience, including the bugged AC, was pretty much the most Owlcat thing ever.

Condolences. You are a brave soul to have attempted it. I mean, WotR is great but we all know how a random glitch can pop at any moment. At least you tried.

So, what have I missed?

I like Solasta, but having just had another completely inscrutable conversation among my party and an NPC in Solasta made me appreciate the writing in Wrath that much more. It’s one feature of WotR that is arguably the best in class, and one of the reasons why WotR is a 2021 stand-out.

Solasta relies too heavily on the mechanics of gameplay to make it shine and yes, many that play WotR focus on builds and combat, too (just see this thread). If that’s all the matters to a player, Solasta will be great. But the gulf between the two games in writing is so huge I would never recommend Solasta over WotR.

In order to decide whether I should believe your opinion, I need to know what you thought about the writing in Pillars of Eternity.

It was just a wisecrack, by the way. I probably won’t have time for either one!

Ha! Nope, not going to go down the PoE road (one of my all-time faves). Usually, I’d love a good compare & contrast but I probably said something in the PoE thread somewhere.

If time is an issue, Solasta would be a better choice. WotR is a huge game, especially if you play TB instead of RTwP.

especially if you play TB instead of RTwP.

For @timjames who may not know better, the near religious divide between TB and RTwP does not apply to the Pathfinder games, because you can switch between them on the fly. At any time. In the middle of a swing. It’s awesome. Why would you use TB near the end of an encounter when the challenge is over and you’re just mopping up adds? Switch to RTwP and take a sip of coffee.

First story DLC, Inevitable Excess coming February 15th, so if you’ve held off playing, there will soon be another reason to start. Also has a new free DLC and console release date pushed to Fall 2022.

I am waiting for the controller support - I really enjoy playing Kingmaker on bigscreen tv. But, it probably won’t arrive until fall now, with the console release.

I keep trying this and keep getting frustrated by the complexity of the builds, and the way my builds tend to either take hours and hours before they get to the good stuff or start out good but by mid-game turn into turds. I hate having to reference an online build guide every time I level up, but my attempts to do it myself have resulted in boxing myself into a corner where I can’t win any fights after a certain point.

On normal difficulty you can just level everyone up in the class they start with.

I didn’t do any special builds and didn’t have a problem with most encounters. Some encounters were total BS no matter what my builds were, but most of them were quite easy.

Here is a simple build that is very strong. Just give everyone wolf pets as much as possible. The paladin lady can get one early by taking a cavalier level that lets her pick a wolf pet, daeran can get a wolf pet through one of the additional secret choices (nature I think), make your main and Lann a demon hunter ranger who can get massive bonuses vs demons and both can get a wolf pet. I think in my party, only woljiff and nenio were the ones without a pets. The whole party was a wrecking crew.

Despite all that, there were some encounters that would still destroy my party and Id have to turn the difficulty level way down to beat them.

I guess I wasn’t very clear, which is on me. What I mean is, I don’t have problems creating builds that will actually work, I have problems creating the builds I want to play that will actually work. In both this and the first Pathfinder game, for instance, I tried a Sword Saint. I love the idea, and it’s something I’ve played in in-person role-playing games (not Pathfinder rules, but the same basic archetype). Cannot get it to work here. Ditto with a classic offensive mage; too weak early on, and boring as hell for a third of the game as everyone else gets to do all the cool stuff. What I’m describing is not a flaw in the game by any means–and I have quite a few hours in this thing so far, so I must like it well enough!–but more of my own inability to really grok the nuances of this system well enough.

I enjoyed my SS, but I wasn’t a fan of casting Touch of Fatigue at the start of every round – even if it did give me an extra attack. It was fine at the beginning of the game, but by the end it just slowed me down.

DEX builds by default just take longer to come online. Makes the prologue and most of Act 1 a bit of a drag. Meanwhile STR builds are over there just wrecking shit.

Blurred for boobies because I’m 12. 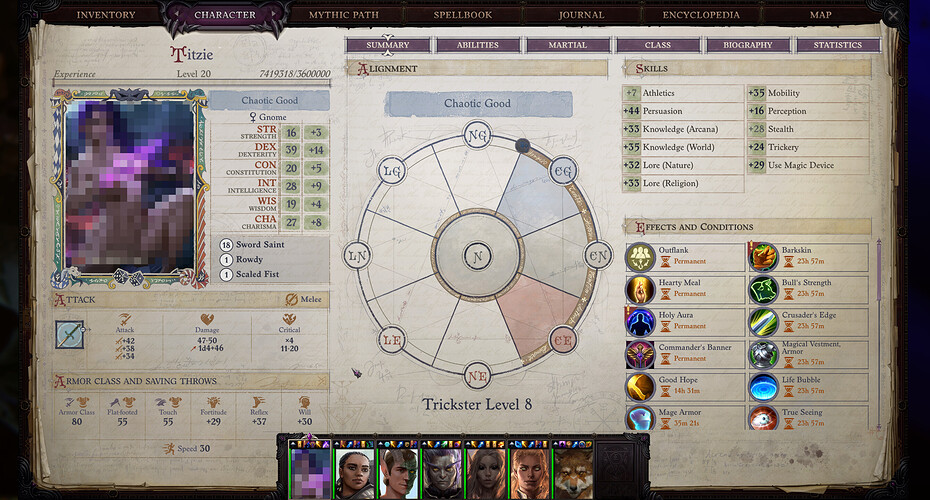 You can friend me on Steam if you want and I’ll be happy to provide assistance. :)

I haven’t tried the Sword Saint, but my understanding is that it’s very good when you have Turn Based Combat turned on.

Oh, I only play with turn based combat. My issue is that early on, I can’t seem to do any damage, and later, I tend to die way too fast and still not do any damage! I am sure I am not doing something right.

Well, the boost is the extra attack and the ability to channel a touch based spell. I think in PnP, the goal is Shocking Grasp, and later Vampiric Touch, and using meta magic versions to power them up through the levels.

And the other goal is to use a Rapier, because your touch spells gain the same threatening range as your weapon.

At least that was my take on the class. A vehicle to cast Shocking Grasp with expanded Critical Range.

And of course buff with as many defensive boosts.

That’s a prefectly good name for a gnome!

That sounds doable. It also sounds not at all what I want, sadly, I was thinking more along the lines of a samurai type dude, someone who uses the sword (a real sword, not some namby-pamby rapier!) as the primary damage dealer, doesn’t wear armor (or at least not heavy armor), and has spells to supplement combat. Sort of a battlemage sans the heavy armor and quasi-knight sort of vibe. I’ve found a monk type class works closest in some ways.