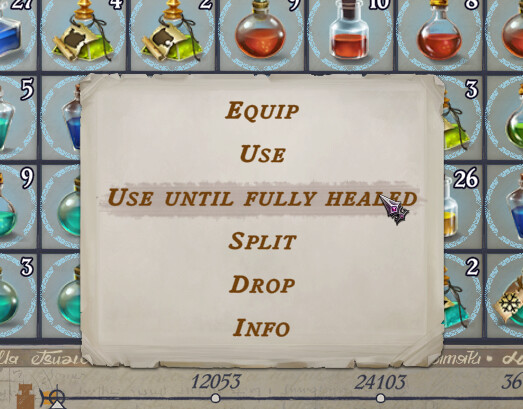 Seriously one of the best QoL things there is.

Our prayers have been heard!!

Abyssal Anchors are still bugged in my Midnight Isles run, but at least the save loaded.

Photomode is neat, but buggy. If you use it outdoors, it enables weather. And I don’t just mean effects, when you turn off photomode it will still be raining or whatever, even if you didn’t touch the weather effects in the photomode settings.

Items are disappearing from the ground. Cool.

Just finished Act 1 and the game is a mess. I strongly doubt Owlcat plays their own game. They continue to break shit that’s worked since the original beta. Like how do you lose the Pipe Fox? How the fuck does that happen? How do they break the pathing in the tavern defense? Why are they fucking with that at all? The game just keeps getting worse.

These guys may be the worst devs to ship a game on the last decade.

Pretty much what we all thought would happen. It’s almost good timing for me, I created so many new builds in the last month I’m a little burnt out on the game. 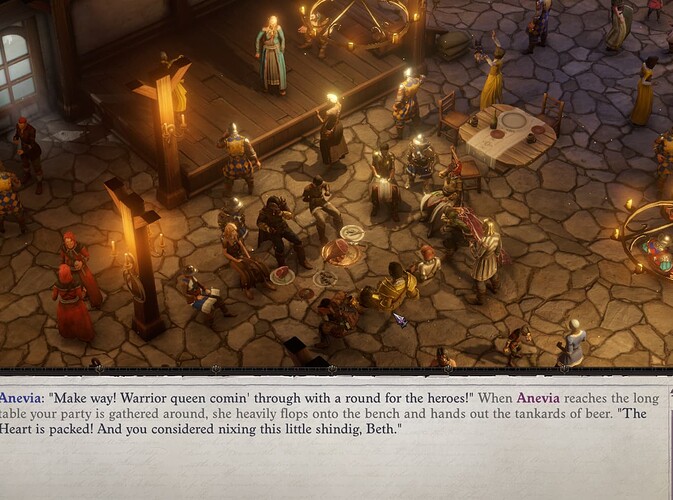 The “Destroy Uncollected Loot” option isn’t working either, or at least it isn’t working for me. If I re-enter an area all the destroyed loot is still there.

What? They just moved the table outside because the Heart is packed! Nothing wrong there.

But yeah, the amount of stuff that Owlcat breaks with each update makes me wonder if they are using players to alpha/beta their work and only doing minimal internal playtesting. Imagine how much better the game could have been with more polish that keeps its shine.

Having completed Through the Ashes, what does the ‘to be continued’ mean at the end? Are they talking about continuing by playing the main game or do they really mean there will be a second part to it at some point, perhaps in Season 2?

they really mean there will be a second part to it at some point, perhaps in Season 2?

This. It’s been pretty much confirmed. Which is a bit disappointing.

This is an amazingly bad patch. I guess it’s better than launch in that only one mythic path is broken - Azata. But then I don’t remember how many were broken at launch.

I guess the console launch was a hard deadline so they had to ship what they had.

How is Aeon right now? I need a different Mythic path for my Paladin Stonelord that I just started and don’t have to worry about Azata. I’ll likely I’ll go with the Aeon, since I already managed Angel, and those are probably the only two that align well enough with the Stonelord.

What would be some good multiclassing options to go with a Mad Dog barb? Not sure I want to do all 20 levels in barb, seems wasteful, and this is for my demon mythic path run too, but I’m not sure what a few good level dips into another class would be. Thinking something that added stealth attack dmg could work, or a mutatio warrior for the mutagens but I think that’s 4 levels to get the first mutagen. Probably going to use Grave Singer as my primary weapon too.

If you switch to a class without a pet, your pet will no longer level up. You could blow a feat on Boon Companion, which would allow you to take 4 levels in a non-pet class and your pet would keep up with you.

There are zero classes that have an animal companion and sneak attacks. You could switch to a Cavalier, but I don’t think that gains you anything. I’m pretty sure you have an alignment conflict with Sohei. Ranger might work, I think the game ignores that they get their pet at level 4, but you’d should probably test it.

Tireless Rage at level 17 is pretty damn good, and the additional +1 to raging at level 20 seems kinda nice.

Mutation Warriors get their mutagen at level 3. So maybe Mad Dog 17 / Mutagen Warrior 3 and pick up Boon Companion at level 19.

Thanks for the suggestions. I got my barb, my incense synthesizer and my mystic theurge build all into Drezen or slightly beyond. . .and then made a Crusader cleric who’s about rdy to defend the tavern at level 5. Gonna go animal, community, nobility, etc. domains for an Angel mythic path, get that sweet sweet spell merge that I’ve yet to experience so I can blast high-level spells by the end of Act 3.

I need an intervention on these builds.

Holy shit, you weren’t kidding about broken pathing in the tavern fight. Even my own party got stuck on stairs and couldn’t move. That is really weird they’d fiddle with the code for that event at this point. Even the event points had trouble triggering correctly, such as when the additional wave comes in and then the minotaur.

Finished Act 2 and holy shit casting level 6 spells at 8th level and with abundant/improved abundant casting for all those spell lots is the hot diggity damn. All that build theorizing over the last year and I think this vanilla Crusader cleric going Angel is the most OP toon I’ve yet to create.

Being 11th level in Act 3 with my Crusader and blasting lvl 8 spells is amazing. Mark of Justice is amazing. Where was this stuff during my previous 490 hours spent in the game. lol