Yeah, after my earlier comments and the replies, I decided not to do the Act IV & V Midnight Isles sections. The Act III portion wasn’t worth the time and definitely was unbalancing for the main campaign. As a stand-alone, it might be worth pursuing, but I have no interest in it now, continuing my main campaign without it.

I was trying it and then hit a bug that made it unable to be completed, but my initial impression was:

And then I started RDR2 again since I never finished it.

Which makes all of the 3 initial DLCs technically misses for me.
I never got to Inevitable Whatever on a playthrough.
I loathed the low level side thing.
Midnight Isles is too long and throws the main campaign off so badly that I kind of hate it.

The next batch looks… also bad?
A sequel to the low-level thing I hated and never finished.
A new companion and class. Actually I like this. This is what I wanted.
And… a side thing where you hang out or something? Weird and I feel like I already don’t like it.

Owlcat really missing me completely with the DLCs, which is odd because for Kingmaker I liked all of them.
Varnhold’s Lot was meh, but kind of enjoyable a couple of times.
The other two were great. New class and companion and a dungeon I could fart off to at some point in each act and get some neat stuff.

I broke my addiction with this game for about a month after beating it with my Crusader/Angel build, but created a Geralt of Rivia the other night, a kitsune with 20 Dex who’ll take master shapeshifter at mythic rank 1 so he’ll have 30 Dex by level 8 (assuming I find a +4 belt by then) who’s going Legendary, 20 levels of grenadier and 20 underground chemist (thus the high Dex rather than Str). So I’ll play Midnight Isles in Act 5 to ensure sufficient xp to hit level 40.

Sounds cool! You don’t need to do MI to get 40, though. You can skip Enigma and Seilkind’s Fallout adventure as well.

If you skip MI in Acts 3 and 4, when you there in Act 5 you will still have to start at the very beginning islands. Which you can plow through, but they will still be the low level Act 3 enemies. 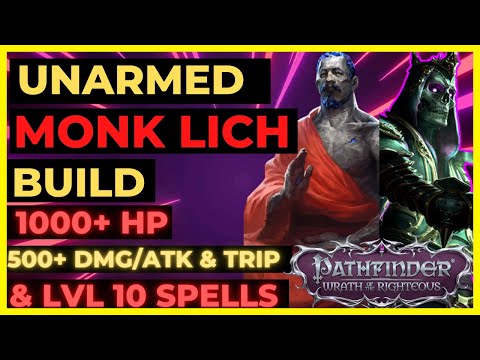 This unarmed monk build has been fun so far, though a bit squishy (might have to take Land Stand as my first mythic, though I was leaning Ever Ready), deals good damage when enlarged and with bull’s strength and hasted with Ki power adding an additional attack/round.

I had my Geralt of Rivia build in Act 2 and saw this video last night and immediately went all: SQUIRREL!! with it. But I’ve done a Legendary playthrough with the game, have yet to go evil or Lich so this should be more interesting anyways.

Seems today’s patch broke the Flying Time Undertow in the Midnight Isles DLC.
The aging counter and the staggering effect when the counter reaches 20 is no longer removed after leaving the island.
So my main character is now permanently staggered… I’ve reported a bug about it.

So I would avoid Midnight Isles or at least islands with Flying Time Undertow until this gets fixed.

Loaded up an Azata / Cavalier of the Paw build from a year ago, stalled out early in Act 4, and realized I had no idea what I was doing last year and wanted to respec the build. But I can’t. Talk to the Flesh Markets Pathfinder society guy and the only options are my companions, and even Toybox shows my main character can’t be respec’d and I have no idea why.

That’s odd. Even after you change the settings? I guess some significant patches have come through recently.

Trying saving the game, and reloading it, and seeing if that helps.

Nope, nothing works. This toon was from Oct/Nov last year, so it might be a bug from whatever version the game was at. I’m interested in finishing the game a few more times via the different Mythic paths, but didn’t want to start over. So I was combing through my dozen+ characters and saw this one in Act 4, but the Feat choices are terrible.

One good thing out of this is that while researching a possibly new Cavalier build I read about Mastery, a fauchard that isn’t available in the game but can be added to your inventory via Toybox. No idea if it actually works though, but it’s a great reach weapon for a charge/trip build https://pathfinderwrathoftherighteous.wiki.fextralife.com/Mastery

Edit: Nah, gonna go Gendarme, all those bonus feats with a horse (bully) still lets me trip and go crazy with the cleave feat line. Combined with combat reflexes and ever ready and the order of the cockatrice, I can start at level 1 with 19 STR, spirited charge and exotic weapon proficiency for dropping Mastery into my inventory at the very get-go for ultimate cheesiness. I could go trickster for the improved x3 crit feats but I’m really wanting to go with an Azata for some reason.

Have you considered a TTT playthrough? It’s a nice change of some mechanics for experienced players.

Going to probably pick this up during the holiday sales, even though I never finished Kingmaker.

With some initial research, I’m thinking about playing a ranger demonslayer angel. Would this be an enjoyable setup, or do you have any better recommendation?

Rangers don’t fit very thematically with angels, but it can certainly work.

For mods you want Toybox, Bubble Buffs, and Bubble Tweaks. Be sure to check the box in Toybox to allow achievements while using mods.

Depends on what “enjoyable setup” means to you. Are you looking for a build that’s thematic or more OP?

I’ll play on easy, so build doesn’t have to be too OP. Just want a fun character to experience the story with.

I’m just shy of 600 hours in the game, and I think my most fun build was a Cleric (crusader subclass) + Angel. He was tanky yet also a powerhouse on the battlefield with those Angel spells, and you can unlock high level spells pretty early in the game when you combine a casting class like cleric (or wizard) with the Angel of Lich mythic paths.

But I also enjoyed my Legend play through with the Aldori Swordlord duelist build. I’m currently doing a Geralt of Rivia Legend build, 20 levels of Alchemist (grenadier) with 20 of Rogue (underground chemist).

Thanks for the suggestion. I’ll take a closer look at the Cleric.

Toybox has hundreds of settings. These are the ones I recommend.

Teleport because you might get stuck somewhere. Take 10 out of Combat (Minimum) to avoid save scumming.

Finished my Aeon Dwarven Stonelord game yesterday. I really like how different it played out from the other runs, as that keeps the game feeling fresh.

The ending I chose was one where I killed Areelu Vorlesh before she even created the Worldwound, wiping myself from existence. I didn’t know that was something that was possible, but it made perfect sense with time travel consequences and all. Love how the ending slides reflected how nothing that I did in the game, nor the last hundred years or so, even happened. I left my companions with some memory of me, even though they had never met me, which made for some interesting takes.

And having changed the past a couple times, I liked how the changes had major impact on later events, like how Staunton took the place of Hulrun (who I killed early on when he attacked me) so I could save the banner in Iz. Meanwhile, I took care of the Queen and Library together since Terendelev was also alive and they weren’t fighting like in past games.

I’m hoping the remaining Mythic paths that I haven’t tried are as memorable: Lich, Azata, Dragon, Swarm, and Trickster (which I bowed out for Legend in my first game). Is Devil different enough from Aeon that it’d be a worthwhile direction to go? It seems they align until you make a divergent choice at some point.

Fortunately, time to break from the game while Season Pass 2 content rolls out so I can see what might be worthwhile adding.

You can tell when I took a break to play WoW. 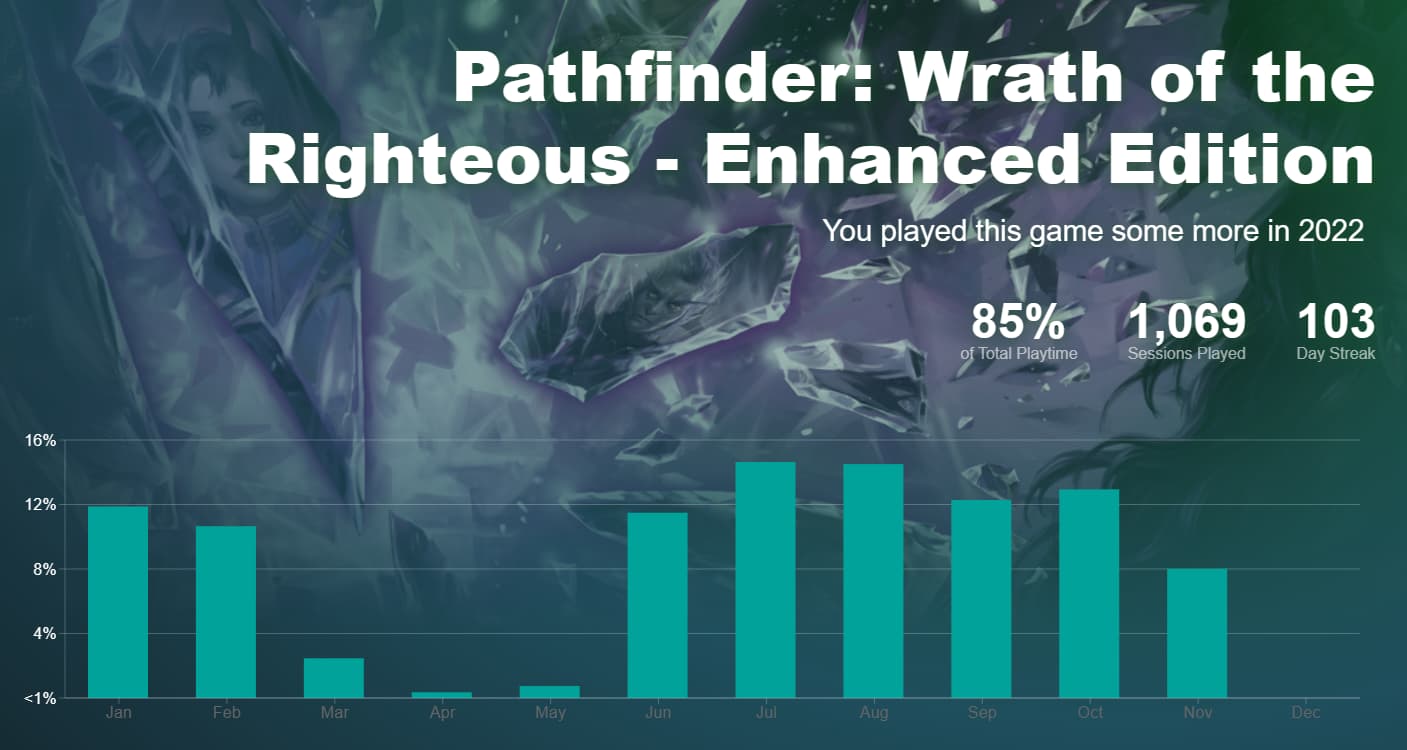