Were there hardcore D&D games out there running pure open rolls with level 1 characters? Those games must reset a lot.

Old school D&D most characters didn’t live past the first level. Heck the original D&D and AD&D sort of assumed you were playing that sort of game, but the game also wasn’t as combat focused really. It was gold focused, you got XP for gold, so the goal was get money and get out alive. As people moved towards more narrative games, that dropped off quite a lot. Add in max hp at start and set hp per level, etc, etc and you end up with a funner experience for most people.

I never understood the concept of having new characters killed randomly in a D&D game. For the most part I hid DM and monster die rolls behind the screen for the first few levels, ran with max hp (or multiple allowed rolls) per level for at least the first (few) player levels, and also ran with a death at -10 hp. Were there hardcore D&D games out there running pure open rolls with level 1 characters? Those games must reset a lot.

Indeed. But this understanding grew out of experience. When the game was new, especially for kids like us who had zero experience with anything like this, in the pre-Internet era, it was all uncharted territory.

It seems like we have the same experience. My interpretation of how the game was to be played as a DM (narratively, as ShivaX put it, rather than an accounting exercise) was very much shaped by how much time I spent just creating the character. I’m not sure why Gygax wrote it that way, but at level 1, if you played strictly by the rules it was more like pen and paper Dark Souls! Perhaps it would have been more fun to start characters off at what would be level 3 today, and throw more kobolds at them.

I’m not sure why Gygax wrote it that way, but at level 1, if you played strictly by the rules it was more like pen and paper Dark Souls! Perhaps it would have been more fun to start characters off at what would be level 3 today, and throw more kobolds at them.

Partly because the game grew out of Gygax’s work on Chainmail, a set of medieval wargame rules where he added among other things a fantasy element IIRC. The wargame roots of D&D are really apparent in the earlier editions, where combat was the focus.

Thanks - I can see why there was no thought behind survivability. It’s the difference between a piece on the board, versus an entire alter ego.

Even my first play through I was level 3 in less than two hours I think.

You were right, and here’s how you do it.

I actually clocked in at 2:05, but, I was a useless Sorcerer. I’m sure a Fighter class could do it faster.

@Scott_Lufkin Did you ever finish PFKM? How was the Wrath Alpha?

Did you ever finish PFKM? How was the Wrath Alpha?

I did, earlier this year, finally wrap up a full playthrough of PFKM and it was really, really glorious. Overall, probably the best D&D video game yet, surpassing my previous favorite (Temple of Elemental Evil). From start to finish it really felt like a very polished game with a massive amount of content, as well.

For the WotR Alpha - yep, I put a few hours in and it’s incredible so far. I stopped myself from playing it too much, I’m sure I’ll do it again when the beta drops, but I was honestly super impressed with how well it played - just about the level of polish I experienced in current Kingmaker really, only a few small graphical bugs that I noticed, no other issues or bugs that I encountered (or that I realized were bugs, at least). The UI and such was right from Kingmaker, and I believe that’s changing for the beta, along with a lot of other “placeholder” items from Kingmaker. But so far my impressions are that this will be even better than KM. For reference, I played the early alpha of KM and … had concerns. This is light years ahead of the KM alpha.

Great, thanks for the update.

An update on the Alpha from Owlcat just came across my email.

We’re all so excited for the release of Wrath of the Righteous, it’s no wonder that so many of you decided to participate in the alpha test, to be among the first crusaders to experience the new game. Thanks to your help, we’re getting a ton of invaluable feedback: we have already planned some changes for the game using the information we got from you, and we’ll be posting a separate update about that soon. But today we have another piece of great news that we want to share with you!

Our alpha testers have been asking us to make the testing period longer so they can play a little bit more. We also know that there are still some people who would like to participate in the alpha, even though the test is about to end. Well, we’ve heard you! So we’ve decided to extend the alpha test – the current version will be available on Steam for the next two months at least.

We will soon stop collecting feedback for the current alpha version, but all the alpha testers and those who decide to jump into the Alpha Early Access now can still play the available version and take part in the second stage of testing, which will take place by the end of the summer. The next alpha version will contain some new content and we will be happy to hear your thoughts on it through a new series of surveys.

The crusade goes on!

Like I said above, the Alpha that I played (about 3 to 4 hours) was incredibly cool, felt very polished (in most ways), and was a cool way to dive in (though I don’t think it’s the proper start of the game). So this can only be great news, as it will mean a smoother beta and ultimately launch experience, at least for the first few acts in the game.

Only $56k more to get my dinosaurs (and the hunter class).

I thought the last goal was met awhile ago? 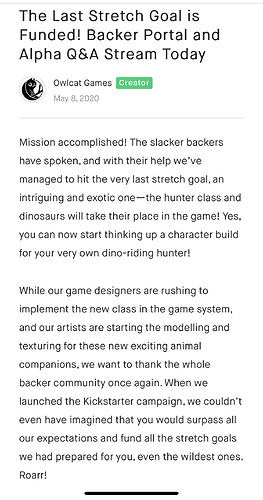 GAH! You’re right! I was reading the old message, lol.

This thread motivated me to reinstall Kingmaker and give it another try. I just reached the Temple of the Elk and I see a treant bear up the steps. Is this the encounter I heard so much about when the game launched? I’m only 2nd level so no idea if my party can take this critter, the boar in the same area dropped two of my fighters before going down.

Level two feels a little low for that area, but you can always make a save and give the fight a try!

Yeah, my Googling suggests this fight is nasty for 2nd level parties, but most of the hits were from the game’s early days, which is why I posted here. Wasn’t sure if the devs rebalanced that difficulty or not at some point in the long, long list of patches released for the game.

Another question: how tight is the time on the main quest’s 89 days for the Stolen Lands? I like to roam about and explore, especially in a new RPG, and generally really dislike quests of this nature that limit my freedom to approach the game how I want to.

Another question: how tight is the time on the main quest’s 89 days for the Stolen Lands?

Not really tight at all. Don’t worry about it.

E - the game always limits the boundaries of where you can explore so you don’t get in over your head.

Another question: is it possible to upgrade your backing $$$ to get early access to the sequel? If so, how?

You should have already been to this page to convert your pledge to a pre-order, but just in case you missed the backer email, here is where you need to be!

EDIT: I will suggest, if you are only just now going through the excellent Kingmaker, you hold off and just enjoy what you have, and let WotR cook for as long as possible before you dive in. Just my two cents.

As always, thanks much Scott.

I just reached the Temple of the Elk and I see a treant bear up the steps. Is this the encounter I heard so much about when the game launched? I’m only 2nd level so no idea if my party can take this critter, the boar in the same area dropped two of my fighters before going down.

You can do it!