I’ve been using that spell all along, or are we talking vendor scrolls?

I’ve been using that spell all along, or are we talking vendor scrolls?

On release there were like 4 dinosaur bones in the entire game.

They added more, but it was still like in the 20’s iirc and all world drops.

Ah, apparently I haven’t cast it that much then, since I’ve never run out of the material component for it.

OK, the Abyss in Act 4 is growing on me a bit. Made it to the Upper City with my kineticist, fought a few battles in the arena, freed some slaves, bought some really good gear (there’s a very noticeable upswing in the quality of gear via both drops and vendors in this act) and working through some fairly well-written quests. Playing a lawful neutral aeon in this act has been fun so far.

And back out of the Abyss having completed every quest I could find. Just shy of 17th level, and it appears Gadfrey has been incompetent in my absence.

The final abyssal fight was pretty epic, though I’m getting tired of cutscenes right after a fight putting my party right in the middle of my own Deadly Earth and then starting a new fight. Instant reload and redo of everything leading up to that cutscene. 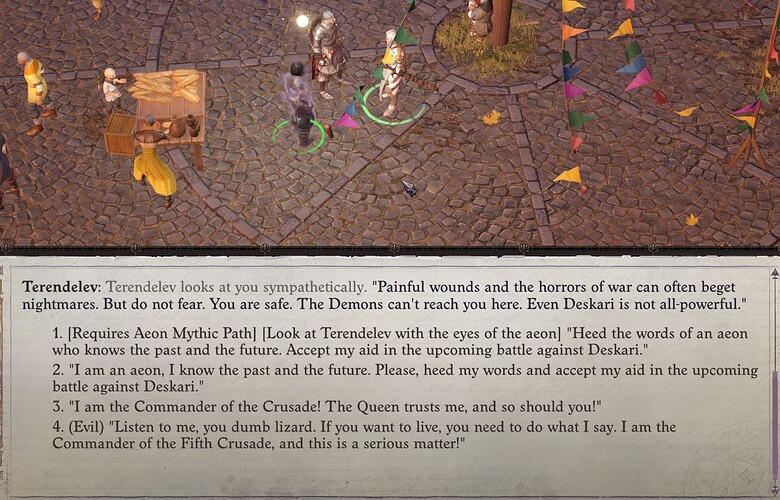 I was going to comment at some point about the Evil options in dialogue, so now’s as good a time as any: why are there so many [Evil] [Attack] combinations? Evil does not mean stupid but somehow going around slaughtering everyone that looks at you sideways is the only kind of evil. I avoid the majority of them (I don’t know if I chose one, so far) and try to go for a neutral or lawful-chaotic axis one in those situations.

It’s too bad, because I find the companions that are evil-aligned to be better written than much of the dialogue for the evil PC. But hey, I suppose it’d be fun to play the insane baby.

I definitely agree. Even when playing evil characters I hardly ever take that [Evil] Attack! dialogue option since it rarely comes off as intelligent or productive. I’ve been thinking about trying a spellcaster-lich build at some point, but the game doesn’t seem very well designed for a fun, evil play through.

I was going to comment at some point about the Evil options in dialogue, so now’s as good a time as any: why are there so many [Evil] [Attack] combinations?

Because they’re allowing the option. Which is also an Evil act.

Just cause it says [Evil] next to something doesn’t mean you have to or even want to click it. It’s just saying if you click it, well that’s an evil act. Probably don’t just murder people randomly. But we give you the option for random murder if you feel like it. Which is Evil btw.

I played Incredibly Evil on my Lich playthrough and I only murdered someone like once near the end. And only really so I could make them an undead minion. Also they pissed me off, so murdering them was on the table for that anyway.

Just because something has an alignment thing next to it, don’t view it as “Good players click this!” or “Evil players will want to do this!” its far more often a reminder of the alignment shift of said action. Not a suggestion. Unless you’re like the Swarm. In which case you’re just eating everything because that’s what you do.

Since they rarely have a non-attack [Evil] option next to an [Evil] [Attack] option, they are suggesting that the other options are non-evil in those situations (or, at least, do not make you ‘more evil’ from wherever you stand now). I know that you don’t have to choose the Evil options just because your chosen alignment is Evil (and I don’t), but if I’m trying to roleplay an Evil character, I have to understand what is considered Evil in the world I’m in. And in this world, attacking is frequently the only Evil choice. If I saw more [Attack] options linked to the other alignments, perhaps I wouldn’t have the same feeling. And part of the problem is that the Evil [Attack] is often just out-of-the-blue on some random person without any particular rhyme or reason (seems more Chaotic to me).

It’s probably because [Attack] is so drastic. Come to think of it, I wouldn’t complain if [Heal] or [Bless] was frequently associated with Good. I’d just do it without question because it feels right for a good character to do those things. That’s probably the crux of the problem. [Attack] just feels to be the stupid choice from a roleplaying perspective, as @John_Reynolds said. If you could [Curse] or [Torture] or otherwise get something out of it, maybe it’d feel better to me as an evil character.

I get what you are saying, though, even if I disagree on the optics of it for the player. I’ve never been the best at roleplaying evil; it’s a struggle.

I struggle with it too. The cruel responses to companions I hardly ever take. I want them in my party, I want them to work with me, so those options never feel natural to me. Unless of course you want to play a nihilistic murder machine, which in that case go for it. But that doesn’t appeal to me, not for a game as long as WotR.

I’ve taken a break from it since hitting Act 5 Sat morning. I was a bit put off that all of my hard work in Act 3 building up that army and securing Drezen seemed to be negated.

I was going to comment at some point about the Evil options in dialogue, so now’s as good a time as any: why are there so many [Evil] [Attack] combinations?

This is pretty easy, actually: there is a small but extremely vocal group of players who measure the “quality” of role-playing in CRPGs by whether or not you can kill every single NPC in the game. If you put out a CRPG that doesn’t allow you to kill all the NPCS, these folks complain loudly online about the “lack of meaningful choice” or “being railroaded.”

So you put in an attack option for every NPCs, which is perfectly doable if you plan for it in advance. … But then you get less bloodthirsty players who are then baffled by having the vast number of [Attack] options, even in dramatic situations where including one is clearly idiotic.

(See also: players who complain if they can’t pickpocket every dirt farmer they meet, even if the dirt farmer has nothing and there are a dozen higher-level guards within hailing distance. Though lots of games nowadays get around that by just not including pickpocketing as a feature.)

This is how I view most of their alignment choices:
[Good] - Just being a nice person or doing the right thing.
[Lawful] - Being a dick or asshole to everyone you meet.
[Chaotic] - The irreverent or be free choice
[Evil] - Being a psycho path.

Nah man, the dudes whining about not being able to kill the kids in Skyrim are totally balanced humans that we don’t need to worry about.

So this is on sale for 15% off. And there’s two new free DLC! They’re trivial, but, hey, more stuff!

This free DLC includes a side quest for Chapter 5 of the Wrath of the Righteous main story. You will visit the new area of Bear’s Maw Shrine. There you will see the consequences of the demonic invasion, which occurred right in the middle of one of the most significant events in the life of any person - a wedding.

E - the new zone for Love Beyond Death is south of Gravestone rock, on the southern edge of the map.

Raise your hand if you’ve also theory crafted a ton of builds, played them for at least a few hours (in my case, 5-10 hours easily), only to refine the build and even, and often, start over. Rather than continue my first and only build in Act 5, my kineticist, I spent the morning messing with a grenadier/underground chemist named Jubal Late only to decide, nah, not fun enough in the early levels to keep my interest.

I love that sort of theorycrafting but the game is a little too linear and narrative heavy for me to really get into starting new characters with this one. That’s not a criticism of the game, just it not aligning fully with my particular tastes.

I’d love a dungeon crawler game with this level of character/party customization. Where I could spend more time playing around with the party and seeing how they fare, less time on redoing the story beats and narrative stuff.

Yeah, same here. The story so far has been fairly solid for a RPG, but it’s the the sheer volume of customization and build options that’s the main draw for me. I’m now at ~220 hours in the game, my hobbit cavalier just landed in the abyss, my kineticist is very early Act 5, and a ton of other builds are scattered across Act 3.

It’s crazy that you can do that, @John_Reynolds, start over new character builds so often. I’d be so afraid of burnout, no matter how much I loved doing it, and that I’d end up never finishing the game. I love a good amount of character design customization, but story, setting, characters, and exploring trumps it for me.