I actually read that as the author of the article is assuming there will be some Kingdom management. We should find out tomorrow, one way or the other, I suspect.

The actual quoted parts in my, uh, quote are from an Owlcat guy FWIW.

Right, but that doesn’t need to mean Kingdom Management specifically, though.

EDIT: To clarify, I’m not saying there won’t be KM or anything, nor would I mind personally, I just don’t think we know for sure yet. I would assume, as other’s suggested, there will be since it seems like a unifying theme to their “series” of Pathfinder RPG’s - if 1 out of 1 is a series, I suppose.

The Mythic Rules introduced in this Adventure Path (and solidified into core rules by the Mythic Adventures hardcover) were so, so bad at launch, and never really corrected in the first edition of the game. Significant added complexity, and really brought the “rocket tag” aspect of high level D&D combat (he who goes first tends to explosively win via Giant Numbers) to any point in your campaign, since Mythic Tiers are completely uncoupled from the built in Experience system and instead accrue as you complete sufficiently mythic deeds, at GM discretion. They lay a separate but similar set of mechanics, defenses, abilities, etc. on top of the already rich character creation and leveling system, and a savvy player could either use them to shore up a base class’s weaknesses or amplify its strengths to unfathomable levels. Spellcasters could even unlock Mythic versions of many classic spells.

The Mythic Paths were interesting in that, although they generally matched up to classic RPG class tropes, you could really attach almost any Path to almost any class, since their abilities were also very pick and choose at each tier and thus each Path could be sculpted in unique directions.

It threw balance for an absurd loop far worse than the base LFQW (Linear Fighter, Quadratic Wizard) flaw in PF, but it also immediately amplified fun for those players who were really invested in the Numbers Go Up power maximization side of the game. As I talked about with PFKM back in the day, I think all of this actually benefits from a single player video game treatment, where it feels more appropriate to spend hours lovingly tweaking your stats and gear, with all the unpleasant math and tracking handled by the computer, and with no worries about making the game “less fun” for another player in your play uninterested in joining you in your munchkin madness (since playing very optimized and completely unoptimized characters in the same party is almost certainly going to be unpleasant for one side or the other).

I hope to see a more player driven, controlled version of the tabletop game’s crafting system this time around, as it really opens up the possibility space for characters to travel down whatever build path they desire. In PFKM, there were certain weapons or build options you knew you shouldn’t take, because available gear necessary to remaining competitive (or even functional!) wasn’t available in the predefined loot in game (e.g., think of the Weapon Focus / Specialization feats, and how obnoxious it was to take a bunch of them and then have your chosen murder tool cap out at a fancy but weak +2 variant midway through the game). The Mythic Rules make player driven crafting much better, allowing you to speed it up to an absurd degree and even eventually craft your own legendary, fully personalized, intelligent artifacts. A fully optimized mythic crafter could easily outfit a band of Adventurers with gloriously goofy gear.

The actual AP itself was fine, though like a lot of Paizo product from that era in the mid 2010s, the editing and balance are quite rough in places. The core conceit is a little Warhammer and a very different feel than KM, so I like that they’re taking full advantage of Golarion’s immersion breakingly massive setting expansiveness, hah. If they clean up the issues while rebalancing and adapting the content, I think it could really live up to its full gonzo potential, which is delightfully high.

Consider me interested! Mythic shit is cool as fuck so long as I’m not the poor bastard stuck GMing for it.

He is and that’s why we all love him so much.

We haven’t even gotten to how I plotted to use the Mythic ruleset for my campaign for ages before its actual release to represent the tiny chunk of a god-facet’s soul lodged in the heart of each PC in the campaign (eons before, the gods, already broken into “facets” by their myriad warring cults, died in a war to end all wars, shattering their divine souls, where they’d occasionally latch onto mortal beings), then fully customized new Mythic Flaws for each PC that went Mythic during the course of the campaign because the base ones in the book are lame as fuck.

Relationships to various very powerful “Icons” in the gameworld (stolen from *13th Age), plus alignment to each of the three core dead gods, and final facet represented in their going mythic based on player actions at the time: 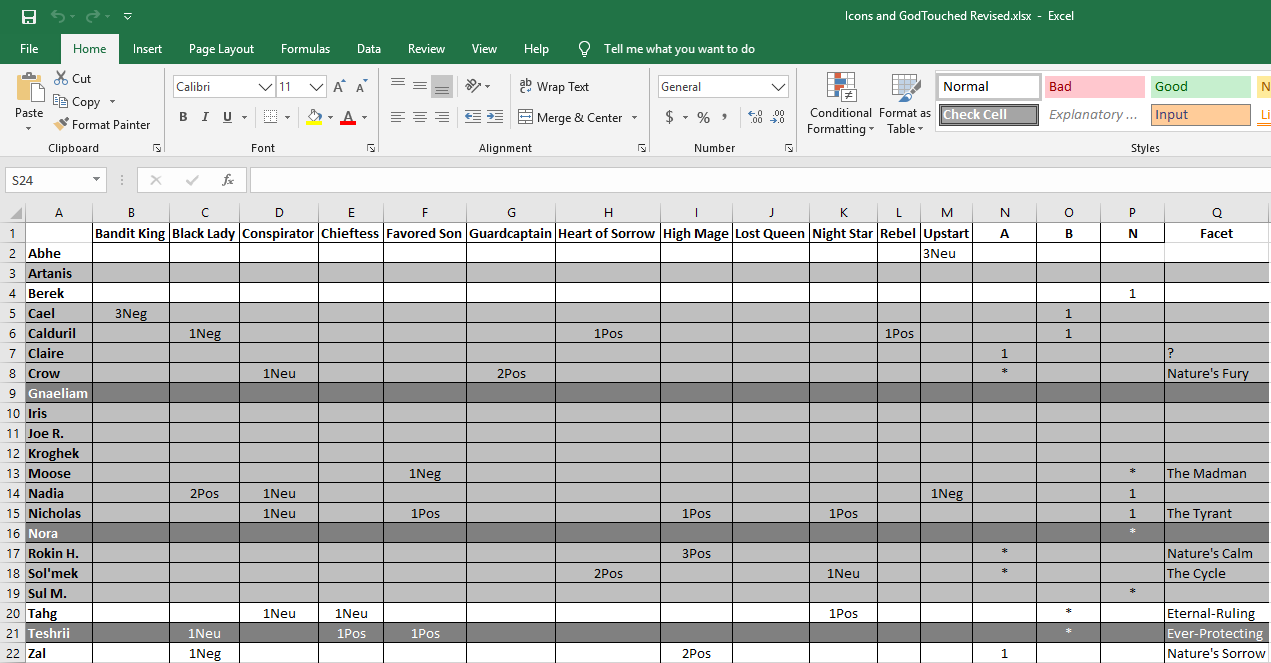 Narrative clues that the characters had broken through and unleashed their godsouls following the Mythic-earning adventure, based on the Paths and powers they chose OOC 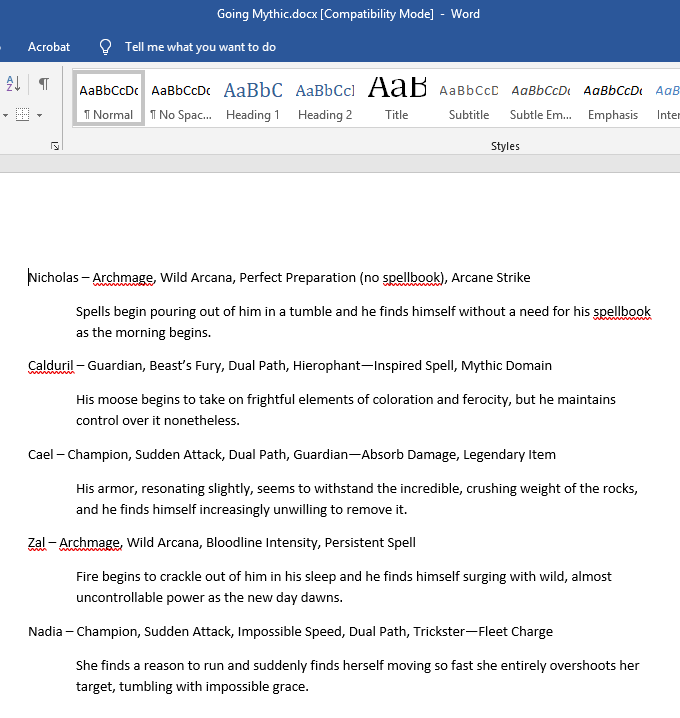 Sample mythic flaw write-up for one PC, designed in tandem with the player, to supplement all the already bullshit Mythics rules specific to his chosen Path and powers, with the flaw growing more mighty – but offering more tempting benefits, as well – as the character advanced in Mythic Tiers:

Tier 1 Temptation: Zal cannot resist the forces of chaos. He cannot willingly benefit from Protection from Chaos or similar effects/spells, and cannot deactivate Spell Resistance to allow these effects through. If the spell/effect in question does...

This sounds really cool. I just hope they drop the kingdom management part and just spend the extra time to add a lot more dungeons to explore.

FWIW I mainly know this Adventure Path because it’s the third one they ported to the Pathfinder Adventure Card Game.

This is a short story on the Worldwound area that I enjoyed quite a bit. Available for 99cents ePub version from Paizo or a 1-hour Audible version for a couple bucks from Amazon: 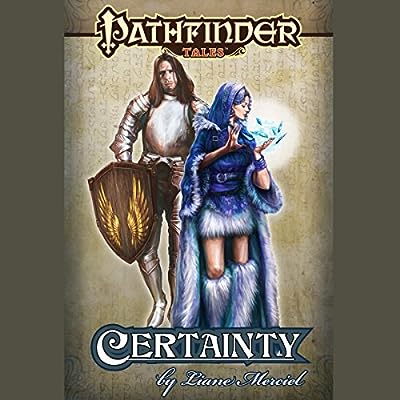 Faith is the greatest battle. To fallen paladin Ederras, right and wrong aren't as clear as they once were, and even the forces of good seem tainted by sin. Lost and broken, the formerly righteous war ...

I’m so there for all of this.

I’m going to be negative Nancy.

I learnt my lesson. Deep discount, eight months later and then a maybe.
If its got kingdom management that isn’t skippable the maybe turns into a never.

I’m going to be negative Nancy.

Sounds rather reasonable to me.
However, you gotta bear in mind that they are using the same toolset & engine they used for Kingmaker. So bugs that were bound to the engine itself/systemic are already solved.

Still, there will likely be new things and of course lots of new story scripting that can break. So waiting a few months is probably a good idea. I just doubt it will have to be almost a year.

The developers have been very up front about this and readily admit and apologized for this stuff, so a repeat performance seems unlikely. You aren’t wrong to want to wait to play it though, especially if you had a negative experience the last time. I choose to believe and support them though, myself.

The full announcement has been provided (I updated the OP):

With our new game, we are taking everything that made Kingmaker enjoyable and building on top of it. We laid a solid foundation and are going to push the boundaries of the CRPG genre with our next title.

We have also changed and adapted mythic paths mechanics for the computer game, to provide the best gaming experience we can. In the new game, you’ll find the mythic paths completely different compared to what you’ve seen in the tabletop game.

I’m starting to wonder if this “Mythic Path” isn’t a replacement for Kingdom Management.

Even more classes yet to be revealed, looks like.

Stop it, already!
Who will have time to play through the game that often?!

I dunno, I might be sad if I can’t cheese my way to 1000-damage power attack crits!

There was a dev stream today with some infos.

Vigilante class is unadaptable to PC.
Pros about Wrath: Epicness. Simplicity in basic ideas.
ALL Mythic Paths can summon allies.
Gain new abilities as you level up.
Similar abilities to a Gestalt (class). Allows you to advance along a somewhat changed class.
Angel: Angel summons other angels.
Lich: Summons Undead. Lich is a wizard. Can become a Lich as fighter. Allows you to cast no matter what class you go in. The spell list changes depending on your class. Fighters get vampiric swords. Wizards an advanced spell book, and gain spells earlier. Lich and Wizard Levels combine. Grants access to 10th level spells.
Trickster: Summons Fae. InanKy’s Favorite. Not really about tricking others. It’s about Tricking the world. Trickster upgrades skills. Mythic level up of skills. Knowledge World replaces 1s with nat 20s. Athletics allows you to remove other conditions like poison and Nausea.

NO Requirement to be Good. You can Be Evil!
Owlcat tries to allow you a lot of ways to derail the story…
New companion has Grandma Patron. She was her grandma, and her dad’s grandma, and her grampa’s grandma… Also, no straight answer as to whether this grandma’s house is related to a chicken.
Special new Witch archetype!
Whole Sandbox chapter
Interactivity to Deity choice… Wanted but may not be implemented
New Character (the elf from the key art, though that wasn’t mentioned and the Key art is an incorrect depiction of her) is based off a concept of Child Crusader. She is Mentally a child. And a Witch. With a whole new Cha casting Archetype.

Mythic system: Advance by Class. In Addition you have a Personal Mythic Journey. Any Mythic Path can be any class. On Top of Class Abilities, some powers become mythic, some new powers. Heavily affects story. A Lich’s Path is different from Angel’s.

We have something to announce! And it isn't announcement of announcement 😉 Pathfinder: Wrath of the Righteous Kickstarter Campaign launches February 4th! You can find a bit more information on our site: owlcatgames.com/news/38 https://t.co/JdqZK6e7ib 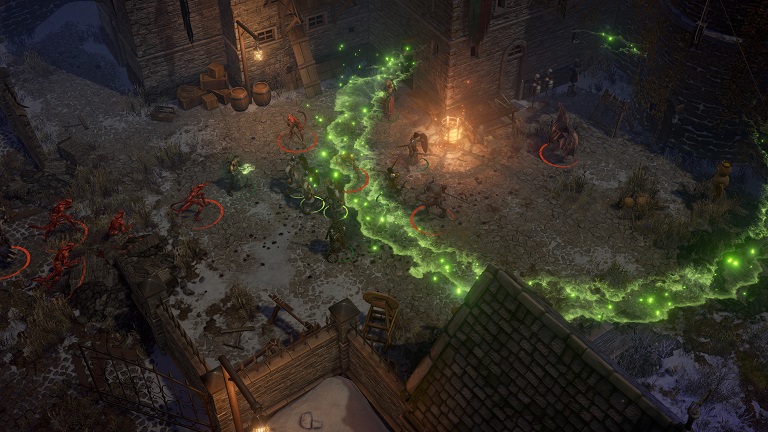 I have over 500 hours into PFKM and I really regret only getting the lowest tier. I’m going all-in on Wrath!