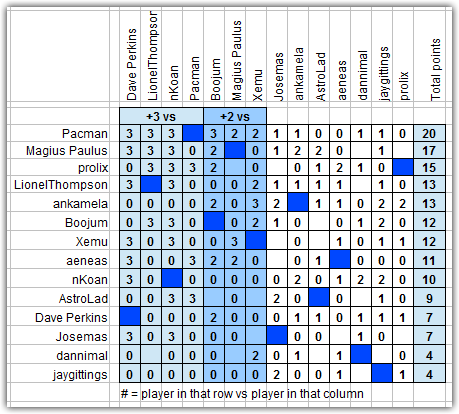 If you want to join, please post or PM me with your choice of hero (see the FAQ in post 2).

These folks are in:

These folks are not in until they say so:

Q: How does the league work?
A: We will each play each other once, and the winner earns whatever reward (in sparkle points) is posted for the loser. Further, if you win while using your chosen Hero, you earn an extra +1 sparkle point.

Q: Okay, okay! Good lord. I’m happy with sparkle points. What do I do now?
A: Challenge anyone in the original post’s list who you haven’t played yet. Winners should report the results in boldface.

Q: Why do the rewards differ for various opponents?
A: Anyone who has made the playoffs in the previous league has their reward inflated by +1 sparkle point. This is a good way to say both “Nice job” and “Up yours.”

Q: Ooo, playoffs? Are they sparkle playoffs?
A: Yes. The top six players as of February 14 (at quarter-to-three late that morning) will play each other round-robin style to determine a sparkle champion.

In, and lets change my hero to… Gabe

Welcome to AstroLad, ankamela, and Josemas! Each of you needs to pick a hero if you want to qualify for the bonus mentioned in the FAQ.

Pick me pick me. Im in. GC name is harry_horse

Going with Mr. Period as my hero.

One thing I wasn’t sure of – do we always use our chosen hero? (Can we?)

I’m in, and will stick with Rex.

Going with Mr. Period as my hero.

One thing I wasn’t sure of – do we always use our chosen hero? (Can we?)

You can’t always choose your hero, but you should whenever you are given the choice for the bonus point here.

Async rules, and turn the randomizer on. Game time of at least 7 days (I generally do 21, even though I’ve never had a game last that long).

You don’t have to use your chosen hero, AstroLad. But you get a bonus point if you win with him.

I would like to change my hero to the 5 different card guy, whatever his name is, if that’s possible.

Thanks! Totally forgot the draw-2-pick-1 setup for heroes.

I’m in and I choose Catsby. Carl wasn’t doing it for me last time;)

I am in, and will switch to Jim Darkmagic. (it’s not you Gabe, it’s me. Well, me and the fact that you never seem to show up as an option for me…)

I’m in, going with Annarchy.

Just seems like Anna’s gonna have to go with Annarchy for my first go at it!

That does make a lot of sense…

Okay, let’s start! Challenge at will!

Lionel, I got two invites from you that both showed up at the same time. So I accepted just one, which we can count for the league, and then when we finish that I would be happy to play the other one for fun.