Planetfall: we need to talk about the M-word

I dunno, the human ones were pretty boring but I kinda liked the Dvar and Amazon campaigns’ backstory and revelations. I think for the most part yeah, you’re only going to get so much story in a 4X scripted campaign, but I liked having mini-goals and puzzles with bits of character and flavor. Plus it helped me really cement where each faction was coming from philosophy-wise.

I dunno, the human ones were pretty boring but I kinda liked the Dvar and Amazon campaigns’ backstory and revelations. I think for the most part yeah, you’re only going to get so much story in a 4X scripted campaign, but I liked having mini-goals and puzzles with bits of character and flavor. Plus it helped me really cement where each faction was coming from philosophy-wise.

I don’t remember how many of the campaigns I started, but I agree that they helped appreciate the lore for the various races.

I honestly wasnt that a big a fan of random worlds, and actually preferred the campaigns.

Also, I had taken Planetfall of my gaming backlog, until this damn @tomchick fellow made a pretty great case for me to reinstall it.

Could somebody tell me more about this feature from the latest patch.

Galactic Empire: Customize your own empire by conquering worlds with progress that carries over between play sessions. Combine technology from various races and carry over heroes between planets as you lay the foundation of an eternal empire!

Does it make a big difference?

later in the game, There are lots of miles available, and it can be fun to think about what the optimal loadout would be against various animals. However, I never have enough cosmite it to reoptimize a stack or two for only a couple of battles So I end up going with mods that work “in general.”
empire mode does help with this a bit as the Environment can sometimes favor certain mods as in Toms example

Does it make a big difference?

I would say yes.

Think of it as a persistent skirmish mode, so your results from one skirmish carry over to the next, i.e. your leader gains, and keeps, that experience, and you maintain a coterie of heroes.

But the twist is you get 3 skirmishes to choose from (you can reroll as many items as you like) and each comes with different parameters, different start conditions, different victory conditions.

You also unlock different mods from races or secret techs, that you can then carry forward.

Could somebody tell me more about this feature from the latest patch.

If only there were a whole post by Tom and a thread discussing it. Then you could read those, and find the information you’re looking for!

Also worth noting that the campaigns use the RMG too ;)

Strollen, this thread you are posting in is #2 in a series Tom is doing for a playthrough of Galactic Empire mode. Here is the first thread which contains both a link to Tom’s article and some discussion.

But to explain what I’m getting at, I need to explain Galactic Empire mode. Normally, you play a 4X as a one-off. You win or lose your game, then try again. But Galactic Empire introduces a persistent progression scheme that weaves context around all your games. For starters, this adds some compelling decisions when you start a new game. Which leveled up hero will you take? Which unlockables will you pack for your trip?

But the most significant decision is which planet will you visit. In other words, which mission will you accept on behalf of your empire? One of the challenges 4X games face is encouraging players to experiment with different set-up options. I’m guessing players rarely do this, since 4X games are already richly varied. The faction you play, and the factions against whom you play, add a ton of variety. Not to mention the choices you make as you develop your cities, build your army, and research new technologies. So who needs different layouts for land masses, or different types of native threats, or different victory conditions, or different rules for founding new cities? Never mind that Planetfall has a ton of cool options for your starting planet, each themed according to its lore. “If there’s one thing Planetfall doesn’t need,” the average player might think as he clears brainspace to make room for all the unit mods he’s about to research, “it’s more variety! Leave the wacky parameters to the Goat Simulator of 4Xs!”

But Galactic Empire mode refuses to let you opt out. So it gives you a choice of planets, each with dramatically different layouts, and each with different rules and victory conditions. Each planet isn’t just some template for procedural generated terrain. Instead, each planet is also a mission.

Thanks Sharpe some how I missed the first post. That really helps.

Here’s an example: last night I did a Galactic Empire world where there were two immediate win conditions: either take over two Spacer cities, or ally with two Dvar factions. I rapidly ran into both Dvar but only located one Spacer city so I was going for the Dvar alliance.

However, that was against my better judgment as my experience is allying with the CPU is like allying with a certain titian-tressed former President. And of course, right after I allied with Shiny Hat Dvar he immediately declared war on Red Hat Dvar, killing my dual alliance plan. Even worse, a few turns later he declared war on another CPU. Then a bit later, another. And a few turns later, the last remaining CPU, so it was 2 vs 4.

And here’s the mental element: I should have cut my losses as soon as the Shiny Hat Dvar declared war on the Red Hat Dvar but somehow I didn’t want to betray the alliance so I didn’t. And then, as he dragged me into war after war, I couldn’t let go of the alliance. By the time I realized we were screwed, he was my only friend.

And then of course, Shiny Hat Dvar got his butt kicked and left me fighting 4 angry CPUs by myself.

The good news is, during the war I had stolen some maps and located the second Spacer City. I had also built some mobile stacks, in an effort to save Shiny Hat’s lost-cause-butt, but he died too fast so I decided to shift my entire strategy, make like Stalingrad in my cities and send my mobile stacks to take out the Spacers.

I was getting smacked around by the 4 CPUS, but I managed to buy enough time for my mobile stacks to take the 2 Spacer cities for the win before I lost more than half my cities. It was hard fought and very enjoyable and I ended up getting the Spacer victory plus also half the XP for the Dvar victory.

I ended up getting a very nice boost to my empire out of that mess, like so: 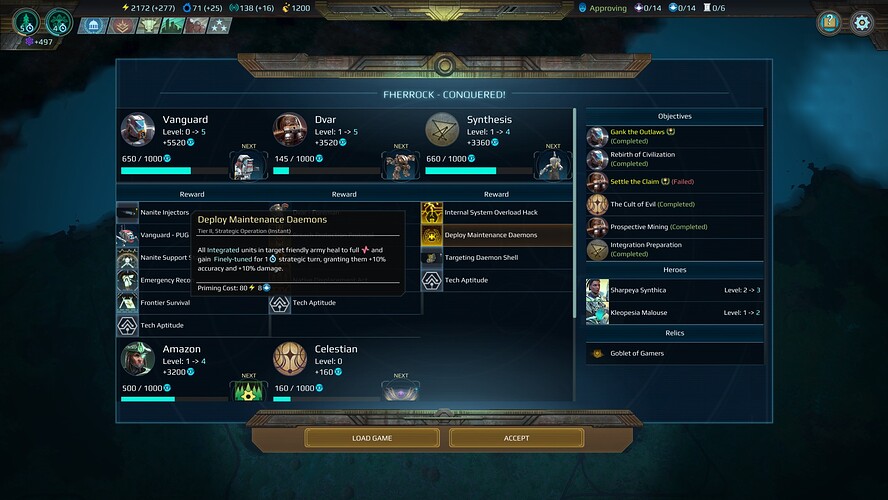 That’s awesome @Sharpe! What a cool example of why Empire mode is so fantastic.

2 questions: how is the auto resolve and how are the neutral wildlife options?

Auto resolve is invaluable for the guaranteed battles you don’t want to bother with, but so many games the dumb tactical AI makes you tediously fight out every battle for fear of auto resolve inflicting way more casualties than your direct control would have taken.

There’s few things in a 4X I have less patience for than spending more time fighting neutrals than other factions. Setting pirates/barbarians/wildlife to “Off” or minimum is the very first setting I change. How are those options in Planetfall and does it throw off the game with them gone?

(one of the few things Heroes of Might & Magic 6 did right was give you the option to accept an auto resolve result, or redo the battle manually)

one of the few things Heroes of Might & Magic did right was give you the option to accept an auto resolve result, or redo the battle manually)

Planet fall let’s you do this

Yes, I liberally autoresolve and re-fight it manually when the AI takes what I consider unacceptable attrition.

There’s few things in a 4X I have less patience for than spending more time fighting neutrals than other factions. Setting pirates/barbarians/wildlife to “Off” or minimum is the very first setting I change. How are those options in Planetfall and does it throw off the game with them gone?

IDK if Planetfall (or AOE3) is a great game for you if you dislike fighting neutrals to that degree. There’s a lot of it in Planetfall at default settings, and I can’t speak to whether it screws up the general flow of the game if you crank them down (I really enjoy this aspect, so I turn it up if anything).

It certainly does give you the knobs to turn in the settings, though, so it’s got that going for it.

Specifically, if you set the Game Flow to “relaxed” in the initial settings, there will be neutrals but they will be substantially less aggressive and more of a passive challenge (except for the occasional roaming Marauder stack).

Indeed, neutral density and aggressiveness can be tweaked.

I tend to the opposite, and really enjoy clearing neutrals :)

Yes, I liberally autoresolve and re-fight it manually when the AI takes what I consider unacceptable attrition.

I think that’s why I have a love-hate relationship with the game. It takes me so long to finish a game. There is always that tempted retry button on tactical battles. I don’t think I’ve ever played a game that is so inviting for save scum. I’m not by a nature a perfectionist, but damn if this game doesn’t bring it out. What’s the optimal mod for each troop type? How do I rearrange the sectors so that everyone gets sector 4, for food, energy, production, and research? I have 300 hours, probably 40 in the last couple weeks, and I haven’t completed a Empire game yet because of my OCD.

Yeah, that’s a thing in Planetfall for sure. To some extent you need to train yourself to let go, heh.

There is always that tempted retry button on tactical battles. I don’t think I’ve ever played a game that is so inviting for save scum.

I just don’t save-scum. There’s no official Iron Man mode in Planetfall, but that’s how I play all 4Xs. In the case of Planetfall’s “retry battle” option, I’ve house-ruled it that if I don’t like the results of an auto-resolve, I get one – and only one! – use of the retry button to fight the battle myself. If I don’t like those results…too bad.

But even then, a game of Planetfall takes me forever, too. I’m that way with most 4Xs, but especially one with Planetfall’s level of detail and tinkering.

Question about Galactic Empire mode: I conquered a planet and gained a Grail Relic and now it tells me I have a Grail benefit of some sort I can requisition with Empire Points - but I’m not sure how to do that. I didn’t see the Grail Doctrine as an option in the pre-planet setup screen when I went on to the next planet, and now that I’m on that next planet, I don’t see any Grail-related options. I figured it was probably an Operation you need to purchase on the mission setup screen but I didn’t see the option, unless perhaps I am blind or it’s weirdly named.

Ooh, that’s nice! I didn’t realize there were any relics that did that.

I was really peeved to discover that your heroes don’t keep their upgrades. They get some really nifty upgrades from the anomalies, but they’re gone for the next game. :(