Play ball! Out of the Park Baseball 23!

If I wasn’t moving and then traveling this summer the UMEBA would sound pretty appealing and would almost be enough to get me to update. Maybe next year.

How much time is it a week to do an online league? Also do different time zones matter as I assume most players are from the states and canada and I live in the eastern europe time zone.

No idea as to the time involved, but I think time zone only would matter in relation to the deadline for exporting before the next sim period, and hopefully they would have the deadline set late enough to
where west coast people would have plenty of time that evening to do whatever they need to do and get the export completed.

Sure, let me know!

How much time is it a week to do an online league? Also do different time zones matter

Time zones, as @vyshka said, do not matter, you just need to pay attention to the sim schedule and export your moves before. The league I’m in has a guy based now in Italy, and others on the west coast. It works fine.

In terms of how much time – it’s really up to you. Most leagues expect a certain level of participation. You should examine their requirements before signing up. But usually those requirements are minimal. My league has a minimal writing and exporting requirement that’s easy to reach, and incentives (participation points) for going beyond that. The points help you gain slight edges in various things (though nothing huge).

But at a bare minimum – I’d say a couple of hours a week. The thing is you grow very attached to your teams (including the farm system) so the issue can become spending too much time at the expense of your real life responsibilities. Not that that would ever happen to me lol.

I’ve been playing OOTPB since the first version and when I started I played maybe 50/50 online vs. my own generated league. Since OOTPB moved into double digits I 100% only play in online leagues. Mainly what has changed are the number of leagues I’m in. At my peak it was four, but now I am down to one and have been on one for maybe six years now.

I also like MMOs and RPGs so playing in an online strategy baseball league oddly fits in with my interests. Some leagues require that you get even more into the RPG aspect and write articles about your team every so often. I am pretty sure I’d be amazed by how much has changed within the baseball game graphics in OOTPB, but I haven’t looked at them in over a decade or so.

And no - don’t care at all about the card game they added a few years ago.

Edit: Just to give a taste this is the StatsPlus website for the league I’m in:

I’m Bryan in this league. We use Slack to communicate and Slack + StatsPlus to do all sorts of league-related actions.

That looks like a good league, Chris. Why team do you manage? I poked around for a bit but couldn’t tell.

Oh, you did mention Bryan, and I managed to miss your team. Well, you’re still having a good season, ten games over five hundred. In a tough division, it seems.

When I first read OTM, I thought of my favorite Red Sox blog, Over the Monster. :)

Has anyone been playing the current season? It’s a bit buggy for me, waiting hard on the first patch.

The new rule about limiting options to the minors was killing me, and I had to turn it off. I have this situation now where I have to option 2 relievers every day, and call up two others, because my pitching staff is permanently exhausted. I did turn down stamina for pitchers, because out of the box it was too high (starters throwing 130 pitches etc), and I also made the mistake of hiring a team doctor with a ‘Poor’ rating in stamina recovery, but I’m stuck in this totally unrealistic cycle now. I have a bunch of starters with poor control (looking at you Blake Snell) and it’s not uncommon for them to last only 4 innings.

Is anyone else seeing this?

Apart from that, I traded Yu Darvish to the Dodgers for Cody Bellinger on Opening Day :) His ratings were still high, though obviously his stats for the last few years are dreadful, so I was curious what the game thought of him. Turns out he can still mash right-handed pitching (.254/.365/.535 through July 14). Yay! But tough to play him against lefties (.190/.273/.418). For what it’s worth, nobody offers anything for him in the trade screen, maybe for in-season payroll budget reasons, so the game doesn’t seem to regard him that highly.

It seems that slumps are even more severe/prolonged than in previous years. Manny Machado didn’t hit .200 until the start of June, there were 3 other guys in my lineup hitting around .160 at that time. Very frustrating; my batting remains in the bottom 3 of the NL, but my pitching is top 3 (with signs that that won’t continue).

It’s been hard to take at times (consistently operating with a 1-run margin of error really takes it out of you), but I think it’s overall more realistic than in previous years where I was able to start steamrolling the lesser teams very quickly.

I keep reading that this release is very buggy. Thats what kept me from pulling the trigger on this one so far.

I don’t know about the regular game, but it sounds like Perfect Team was still having some issues when they launched today.

Well, for all my bitching and moaning upthread about having no offense, the Padres only went and won the WS in my first season. I don’t think that has ever happened before.

Boston really outclassed us on paper, but we took a 3-0 lead and things worked out ok (although I wasfearing the worst after a WS in OOTP21, where the Angels came back from 3-0 down and won Game 7 1-0, with the Padres making 3 errors :( ) 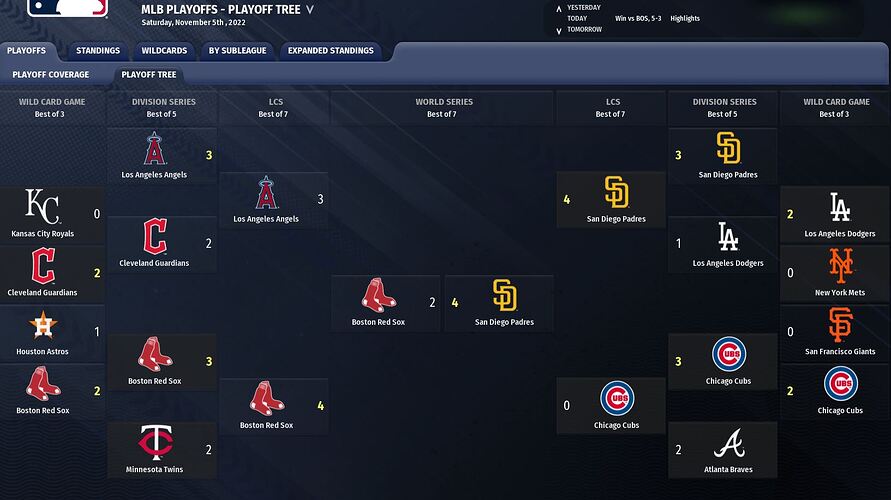 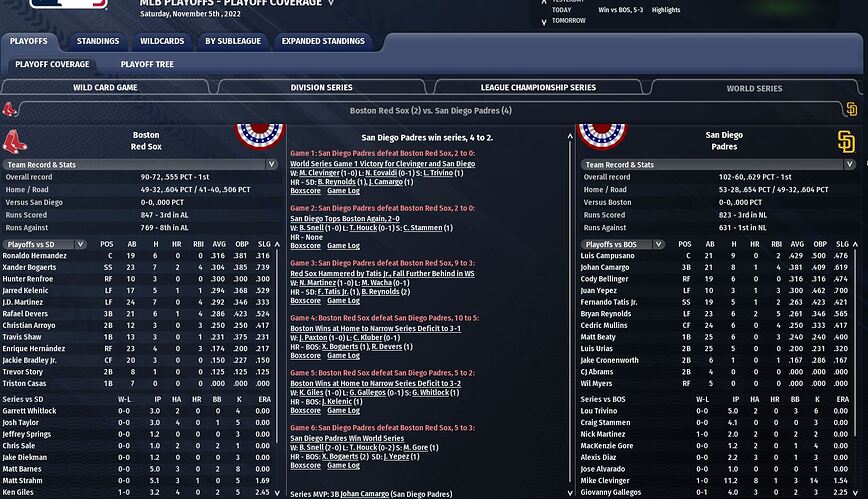 Tatis came back at the end of June and turbocharged the offense - put up 7.3 WAR in only 81 games :O 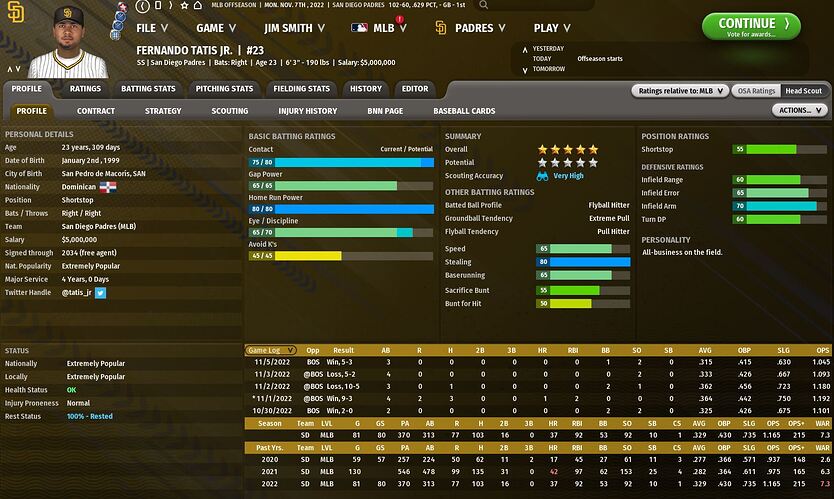 I guess that comes down to small sample size; he couldn’t really be worth a prorated 14 WAR and 70 HR…or could he? :P

Other major transactions were mostly as a result of my terrible hitting early on. I sent Trent Grisham and Sean Manea to the Pirates for Bryan Reynolds. Grisham put up 5.2 WAR over there afterwards, so it was weighted in Pittsburgh’s favour - it’s just he never hit for me in previous games, despite good ratings, so he was on a short leash this year.

Bellinger for Darvish to the Dodgers. Bellinger cooled off considerably during the year - the game sees him as merely an above average hitter, and his 2.4 WAR for the season bears that out, though he missed some time.

Cedric Mullins from Baltimore for a prospect and a long man was probably the most unbalanced trade I made. I have trade settings on ‘heavily favour prospects’ and the game loves the kid who made the All Star Futures Game, but Mullins was pretty good for me.

I sent Manny Machado to Milwaukee for Luis Urias; Manny has an opt-out next year and I needed to start planning early for that. Manny’s replacement, Johan Camargo of the Phillies, won World Series MVP (but is really utility-man level).

There were a few things I noticed at the start, like the links to some reports not working, returning errors etc, but I haven’t noticed them recently. One thing I thought was a bug, was just me not knowing players being optioned to the minors was limited this year. But the main thing I have is that there is what looks very like a memory leak when I play out my games. After a couple of games, the players on the field start stuttering - it seems to be prompted by a visit to the lineup screen around the middle innings, though I can’t replicate it consistently . That lasts until the end of the game. It doesn’t affect anything else, though I’m afraid to close down in the middle of a game. Patch 1 didn’t fix it, and I haven’t seen it mentioned in the bug reports so it may be just me. Restarting the game solves it, but it is very annoying. If you don’t play out your games, you should be ok.

I haven’t had any of the other bugs like all your team looking like Michael Jackson or whatever ;)

Edit: No crashes at all; very stable apart from the slowdown

Yeah, the Cubs made the playoffs.

Yeah, the Cubs made the playoffs.

My wife is hopelessly addicted, so when we are not watching baseball or the nba playoffs, we are siming the Detroit Tigers. She’s condifident she can turn them around. Lol

I had to change four fifths of my starting rotation in the offseason and through June 2023 my strategy of 100% groundballers appears to be paying off:

I’m not sure how I feel about this year’s game. It seems too easy to assemble a winning team, especially if you have a decent core with which to kickstart your trades. Maybe I have eased off a bit too much on the self-policing of trades, but it used to take me several years before I could compete with the Padres (obviously they have a little more talent in recent years too).

One of the problems, I think, is that the game is actually reflecting real baseball - low contact, high power hitting - so if you stack your lineup with contact hitters, you’re already ahead of the game. I feel that if you had 9 guys who could hit .270 and contribute 5 home runs each, you’d compete for your division in this version :P

The online league I’m in, the long running Monty Brewster Baseball Association, has just converted over to v23 and we are about to enter the off-season. We also lost several GMs. The feeder league UMEBA has been reconstituted as an eight team league with new locations, the Global Baseball Consortium.

We currently have vacancies for four of the eight teams in the GBC, and we have several new owners who have never been in online leagues before. So it is a great time to hop in and learn the best way to play OOTP.

Anyone interested can apply here, and please drop my name (I have the same forum name, tylertoo) because GMs get extra participation points for recruiting. Thanks.

This actually looks pretty good for a mobile game. I don’t think you can link it to the PC version (maybe the Perfect Team stuff), but seems pretty full featured.