If it’s okay with the group, I’d like to use a re-roll from our floating sky-city if I roll a critical fail on it. If I’m within range of a Critical Success with my ability, I’ll go ahead and use it, as well

I’m generally okay with rolling Single Rewards for maximum fair (but minimum efficiency), but note that if we choose to do so, RAW, all characters roll the target die, not just the subset of ones who want it most :).

I’m ok with this as well, and it’s probably best to do it’s this way. We’re a proudly communist group and value group cohesion over some bourgeoise notion of efficiency!

Okay. You managed to get every result except a HEX, so be proud of that? Updated everyone’s choices + secondary stats.

If we’re rolling Single Rewards, that means Akbar gets +3 energy (10), and Cheya gets the Ironscale Potion (9). Orion got a 3, Chimminy a 2.

As for the event, Chimminy tests Energy and Explore, and gets: HEX and HEX. As if to make up for striking out so often on rewards… that’s -8 to an Energy Drain of 6. Moreover, you spot the great eagle Arcalima, and everyone heals to full Vitals, giving Akbar his first full rank of Metabolic. You can now contact Malambrose the True and treat any Great Tree hex as a Caravansary for purposes of Journeying with him. 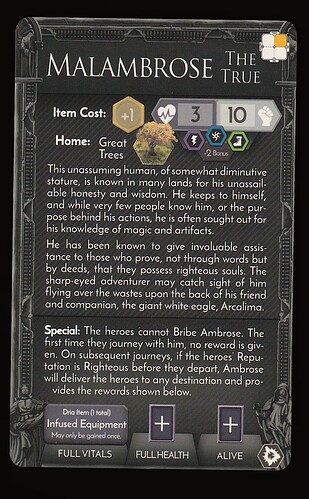 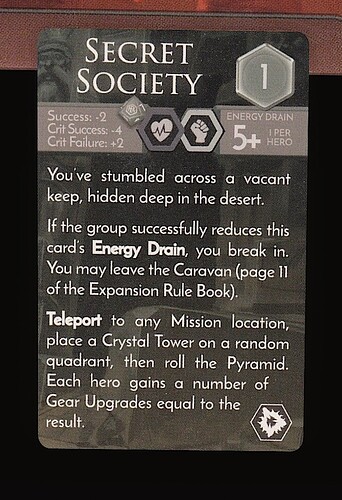 Okay. You managed to get every result except a HEX, so be proud of that? Updated everyone’s choices + secondary stats.

As for the event, Chimminy tests Energy and Explore, and gets: HEX and HEX. As if to make up for striking out so often on rewards… that’s -8 to an Energy Drain of 6. Moreover, you spot the great eagle Arcalima, and everyone heals to full Vitals, giving Akbar his first full rank of Metabolic. You can now contact Malambrose the True and treat any Great Tree hex as a Caravansary for purposes of Journeying with him.

Looks like Akbar’s most well-equipped for this challenge, @Ormus, with Orion as a second @Thraeg. Obviously, if they falter, Cheya and I can step in.

If we do succeed on the Secret Society Event, I’ll vote against the teleport option. As nice as it would be to take care of a Mission, Melhin’s rewards are substantial, and we can always get back out after a turn in-town. Melhin below as a reminder: 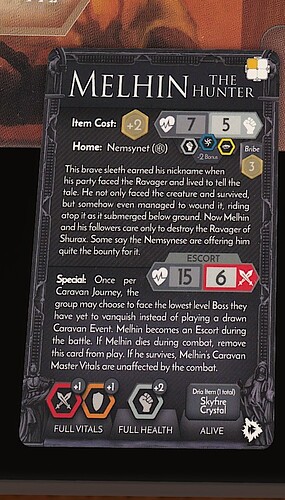 The alternative would probably be following up the second Phorora mission, which would involve Wandering off a Ruined Village hex to net a gold and 2 power-ups apiece, plus however many gear upgrades the sand die (d4) roll gets us, for the low low cost of 2 food apiece, letting a random location get Crystal Tower’ed, and dealing with whatever we Wander into, plus the opportunity cost of not completing the Caravan mission (losing out on about 4 power-ups’ worth of boons, a Skyfire Crystal – that could be big if one of the 0- or 1-food rating heroes gets irradiated, and the reputation bonuses/travel to a town that we have technically paid for). 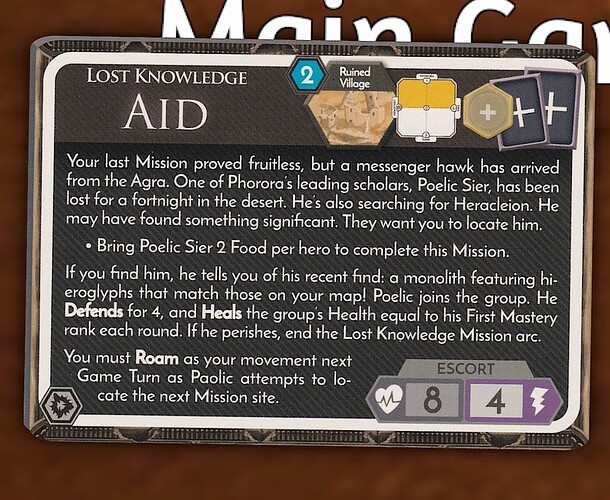 Now, maybe we roll a 4 on the sand die and walk away with 6 total power-ups + gear upgrades and that feels pretty good, but if we roll a 1 or even a 2, it’s a bad trade at best, IMO. I say we stick with Melhin :)

I think you have to roll for the single rewards under normal rules, right? You can’t just choose as I recall. Still, I can really use the energy, I am extremely energy dependent.

Happy and keen to take the Secret Society on.

We can’t abandon Melhin, we have been through so much together. Remember when we beat that Pangolin way back 17 posts ago?

Agreed and vote against teleporting. This is our final event isn’t it?

I think you have to roll for the single rewards under normal rules, right? You can’t just choose as I recall. 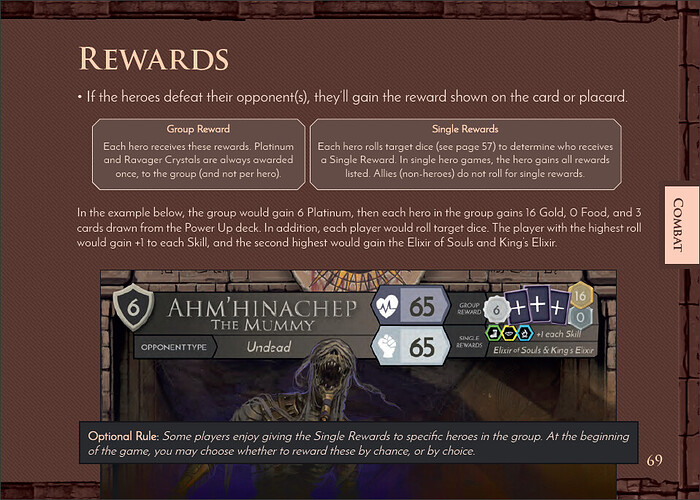 It’s one of 400 optional rules the HEXplore It series layers on top of the 900 definitive rules and 300 expansion rules and 4000 combine-multiple-games-into-one rules and 12xinfinity monthly changing event rules, so, easy to miss, to say the least, hah!

I’ll also say this in favor of rolled rewards: it will help speed the pacing of the forum game by removing at least one decision space from our to-do pile >.>

Roaming off the village - Wandering is one hex, Roaming is 1d6 hexes. And the gold with a + is 2 gold if you match Phorora’s reputation after the rep adjustment, zero if you don’t. (But you do.) I tend to agree that it’s a bad idea, in particular because Crystal Tower == Remnant (I wish they’d just use that term consistently, but I guess the idea may be to confirm that there is a harvestable Tower in the remnant even though it’s not placed by Ravager turn stuff.) and the Act II condition checks for Remnants anywhere on the board, not just the Wastes.

Incidentally, it totally didn’t matter but I forgot Melhin gave you a -2 bonus on both Energy and Explore tests, so those crits were even more critty.

I think you have to roll for the single rewards under normal rules, right? You can’t just choose as I recall.

It’s the default but it says right at the end of Rewards that you can optionally choose to award them to specific heroes - you make the choice one way or the other at the start. (But it hasn’t come up before now, so I didn’t worry about it.) We’re confirmed on random at this point though.

This is our final event isn’t it?

Caravan Journey finishes. Everyone takes +1 to Attack and Defend, +2 to Energy, and someone gets a Skyfire Crystal. You Teleport to Nemsynet and receive +2 to Rebellious. 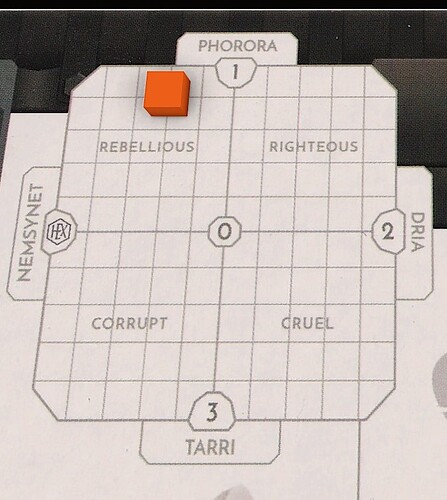 Ravager Phase
The Ravager returns below the sands, leaving an enormous Crystal Tower in its wake, pulsing radiation into the Wastes. 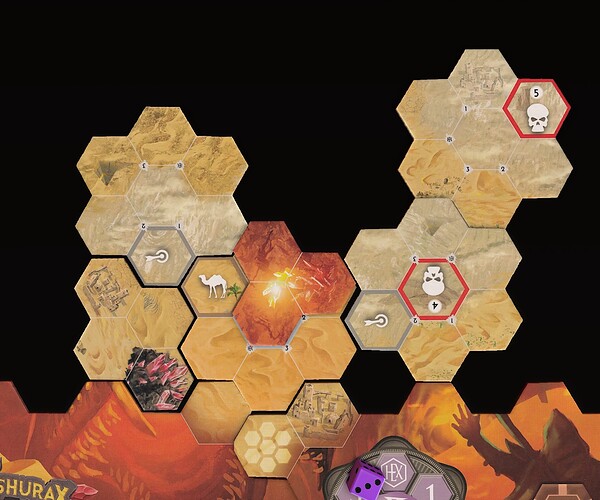 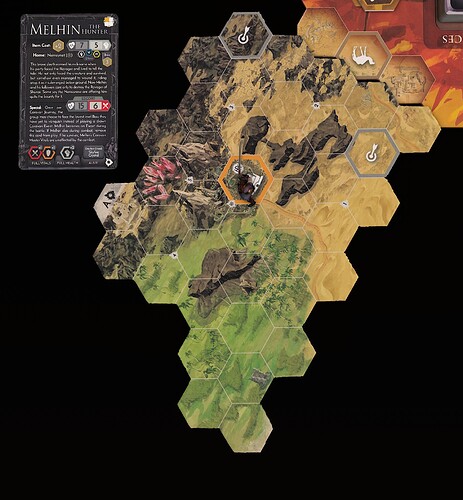 Turn 5
Movement Phase
I assume, having come here deliberately, you do not immediately turn around and leave Nemsynet, so:
Camping. 3 health and 3 energy healing. (Akbar as the only injured party heals 3 energy and gets 1 TP.)
No skill bonus in City-States. No Skills phase. No food consumed. No Circumstance Phase.

Event Phase
Each of you can select one of four City-State Actions to perform:
Schooling and Sparring: buy Gear Upgrades - in Nemsynet, that’s Energy, Attack, or Explore. As you are aligned with Nemsynet (Rebellious), you would receive a -1 gold discount.
Employ: work to earn gold. In Nemsynet, you entertain nobles. +3 gold, +2 for being aligned, +1 platinum and +6 gold if you are an Assist or Sapper. (Cheya or Orion.) If anyone does this you may optionally move your reputation one step horizontally towards Nemsynet. (Once regardless of how many people do this.)
Scarabs: gamble. (the sheet on how to do this is in the OP). Nemsynet is really into gambling so you get special bonuses.
Arena: another minigame, rules in the OP. Reputation from the Arena applies everywhere but Tarri, which has separate Arena reputation (but Tarri rep gains apply everywhere).

At any time while you’re here you may purchase any item from the Bazaar or Nemsynet city list (check the expansion rulebook also). But be warned that buying stuff in Nemsynet may get you mugged - see the Danger on the City sheet.

I’m going to entertain the masses with my whip tricks.

And after that, I’d like to purchase the Dust Skimmer, Survival Kit and Extraction Tools for the group: total cost is 52 gold I believe. And I think I’d also like to grab 3 Hypersense Tonics, 2 Hardy Rations, and 3 Poutlices for a total of 13 more.

EDIT: Wait on all that. Let me look at the mugging risk.

EDIT3: Oh sorry, I see the guard event now on the Bazaar placard.

From what I can tell, the brigands can be bribed to leave us alone, which would be cheaper than forking over 10% of our gold.

So, I’d like to go ahead with my shopping, and throw in a Weighted Dice and a Sphinx Blood Booster as well.

EDIT: And now I see that platinum is not fungible. So I can only spend the gold I have. Let me rethink.

I will save my platinum as it might be useful later. However I believe I still have 17g after entertaining. So I will purchase a Survival Kit, 2 Spell Components and 2 Poultices, leaving me with 5g.

I presume the pickpockets can’t get my Platinum and I can’t see anything about the bribe cost. If I am just missing it then I will adjust as needed rather than fight the Guards. Losing 10% of 5g to the pickpockets seems ok!

I’ll have 17 gold as well. Can I suggest pooling our gold to purchase either the Dust Skimmer or Extraction Tools?

The Platinum is group-wide, not individual. :)

Happy to give my last 5g towards the Dust Skimmer

Double-checking my math - you all spent effectively 3 gold a piece on food, bribing and potion and then got 3 gold each from the Pangolin, so I think before you start working etc you should be at 6/6/10/10 gold or 32 total party-wide, yes? Working from the two folks that have the Employ bonus will generate another 22. if you all do it, another 10. FWIW.

I just trusted the 6g that was on my character sheet was my initial amount. I will drop Spell components and Poultices in that order to make up any shortfall needed. Would like to keep the Survival Kit though, the energy healing per turn is useful for me.

Survival Kits are very good. They also knock food off the Caravan events. Speaking of which, forgot to do 2 off each person for that. Fixing.

Well, I wouldn’t mind getting some other stuff, but I think the Dust Skimmer will be useful, so I’ll chip in the remaining 15g for that (unless Orion and/or Chiminy also want to contribute.) I’ll spend my remaining 2g on a Hypersense Tonic; no sense in leaving any in my satchel for the guards to steal. If Orion or Chiminy want to chip in for the skimmer, I’ll re-evaluate.

Each of you can select one of four City-State Actions to perform:

I believe that will bring me to 15 gold total

I’m in to contribute to buying a Dust Skimmer (10 gold remaining). I’d like to buy a Survival Kit (4 gold remaining). I also think I want a Territory Map to help stave off the Ravager advancing another Phase (1 gold left).

If the group wants to start harvesting Ravager Crystals, I’ll spend the 6 gold on Extraction Tools rather than the Survival Kit, but that would be a huge investment for most folks (11 total between Skimmers and Tools!), so I would understand if we wanna wait till the next time we’re in town.