While you are in the Wastes you move more slowly and have to eat food equal to your Food rating even if you make your survival check.

I’m pretty sure you only have to eat 1 food if you make your survival check.

I’m pretty sure you only have to eat 1 food if you make your survival check.

Oops, you are correct. That’s better than I was thinking. (And I was playing that wrong in my other game of Sands, although I personally had a Food Rating of 1 anyway.)

Edited in name + gear to the character sheet.

My character’s name is Akbar. Because it sounds “deserty”. Definitely no other reason.

I will spend 4g on my Second Mastery going to 5 in All Tied Up and 3g in Survival going to 3. Saving 3g for food later.

I agree to go along the left edge to reveal tiles towards the Caravansary at normal speed.

I have not played this volume so happy to roll randomly for rep / go with the flow.

Do we get to place the HOT tiles from the Nemsynet mission? If so maybe on the right side of our starting tile?

Ah, yes, looking at that you do get to search for and place those. It’s “may”, so it’s up to the group. You are probably not strong enough to fight the level 1 boss, let alone the level 4 and 5 bosses, so you might not want to. Then again, if they’re placed you know where they are and the Ravager has more room to move when it shows up. (Which it only has a 25% chance of doing this turn.)

Also could you display the cards for the Caravansary and Oasis as they are relevant right now?

Maybe we should also consider moving cautiously around the left side? That dragon or a bad top-deck could wreck us. From my experience you can lose this game mighty quick.

Maybe we should also consider moving cautiously around the left side?

Yeah, I’m down with this, and if we place the Nemsynet tiles, we get the extra Ravager timer from that.

There isn’t a specific placard for either of those. The gist of how they work is on the Game Turn placard, there are more details about the Oasis on rulebook page 32 and the Caravan rules start on page 76. You’ll have to actually go to the Caravansary to reveal which Caravan Master is there and where they are going, but I guess you might as well have the Bazaar placard in case the other non-Food items are enough to prompt a visit. 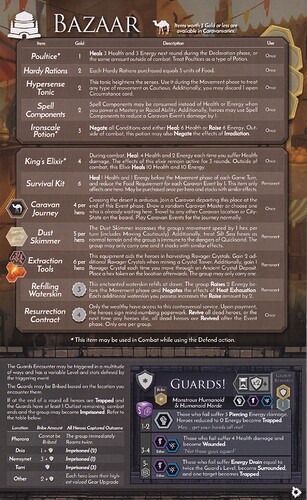 Bazaar1249×2031 973 KB
Only items above the first divider are available from Caravans. You do not have to Journey with the caravan to buy from them, but you can make those purchases before that Journey begins or before or after any Caravan Event if you do decide to. Note that the Caravan Master will impose a surcharge so you can’t fully plan any purchases until you have that info.

Edit: There are also 2 eligible items on page 14 of the expansion rulebook:
Shuraxian Spice (2 gold): This burnt orange dust is a new cooking spice that has appeared in the region
since the Ravager has surfaced. Consume this item during the Skill phase with
at least 1 unit of Food. For the rest of the Game Turn, your attacks deal 2 extra
damage. Additionally, if you possess a Mutation, roll a four-sided die. If the
result is a hex, treat one of your Mutations as having an extra copy this turn.
Territory Map (3 gold): Use the Territory Map at any time to draw a HOTtile or HEXtile of your choice,
and place it on the map.
Both single use.

I think if I understand it correctly that we can attempt the Shurri quest in a desert space. Needs two successful Explore rolls though (mine is only 2). Those power-up rewards look tasty though.

I just want to throw in that if @ArmandoPenblade wants to self publish his character’s background novel trilogy on Amazon I will purchase it.

A desert mission space. You haven’t found any of those yet. At least not in the Wastes. (Mission spaces can only be used for one mission in a game, btw. You cover them with a Hex token after you complete the mission.)

wants to self publish his character’s background novel trilogy on Amazon I will purchase it.

I considered not even writing up my minimum-level-of-effort background because it’s sure to be pathetic next to @ArmandoPenblade’s :)

“Greetin’s, chaps, Chimminy Plockett here, Fairy o’ Upper Midwest Lod’nonderry o’ the Great Empire o’. . . oh, oh dear. I seem to ‘ave stepped through the wrong Fairy Circle entirely; this isn’t the Phantasmal Amphitheater at all. Goodness me, though, don’t you all look positively swelterin’ an’ miserable. Can’t say I’m bothered by the heat much, meself, but I understand you bigger types ‘ave a mighty rough time of it. Especially you, my whip-wielding troll-friend. Goodness gracious, I’d hate to miss the first performances o’ the year, but it looks to me like you’re all desperately in need of the very particular kind o’ aid only the legendary Chimminy Plockett hisself can provide! Lucky for you, ‘ere I am, ready an’ more’n willin’ to help!”

Before you flutters a diminutive man, approximately 9 inches tall, wearing an incredibly elaborate, violently purple three-piece suit, with a lurid orange-and-white checked necktie, a slightly lopsided black bowler hat, and the very tiniest set of high-heeled black boots you’ve ever seen. He is curiously leaning back on both arms in mid-air, giving the impression that he’s supporting himself on the two lavender umbrellas held in his tiny, pale hands. His small, black eyes flick back and forth between you as his pointed face splits into an unpleasantly wide grin, revealing rows of tiny, razor-sharp teeth.

I’m eager to find some Silt Sands and go digging for that Phororan tomb and hang out and Excavate for a bit. And generally just rank up a smidge ahead of trying to fight anything particularly nasty, so I’d personally recommend Cautious movement, though it’ll drain the food reserves of those who need it.]

I just want to throw in that if @ArmandoPenblade wants to self publish his character’s background novel trilogy on Amazon I will purchase it.

The Positively Absurd Adventures and Activities of One Chimminy Plockett, vol. 1: Finding the Favor of the Fairy Queen, available now at a bookseller near you.

The first thing you notice about Cheya Crimsonhide (her family’s farm produces prized red-furred riding bulls, in addition to its primary trade in peacock steaks and hat feathers) is her height. Fully 2.5 meters, she towers over any crowd. She’s lithe, but sturdy, with skin the color and apparent texture of wet granite: sharp, flat and pitted, but with a pleasant face that supports a wide, easy grin. Her hair is a course, sun-bleached red mass tied back in a careless ponytail beneath a well-worn, wide-brimmed straw hat. A pair of functional denim coveralls and broken-down leather boots fill out her attire, but it’s her cloak that finally draws the eye; it’s a shimmering, constantly moving kaleidoscope of peacock feathers that dazzles and obscures, hiding her nimble movements so that it appears she almost teleports from place to place. Her bullwhip is wrapped around her waist and the electrified tip drips sparks on the ground as she twirls. Her voice is quick, a musical contralto as she drily intones with a thick Bringtown accent “Gosh, this heat, ye’up. Well maybe y’don’ mind lendin’ me one’a those tiny 'brellas fah some shade there little un.”

“Oi now, might you be proposin’ a trade there, miss? Any good fairy worth ‘is wings is always keen to make a deal, ay. I must say, I’m quite taken with that there cloak o’ yours, an’ particularly the way it shines n shimmers. Though, I would understand if’n you’re not keen to lose ‘old of it, much the same as I’m rather fond o’ me umbrellas, y’see. They’re quite important to the 'ole ensemble, innitay?” Chimminy flourishes an umbrella in front of his person, a faint trickle of fairy dust tracing the elaborate swirling motion of its pointed, gleaming tip. At the end of the maneuver, he stabs the umbrella downward into mid-air and rests his right forearm atop its hooked handle, leaning against it and peering directly at Cheya’s rightmost nostril. With a huff, he flicks his wings to bring himself up to eye-level and winks.

[OOC: lol @malkav11 thought he was going to get to run a game of Sands of Shurax, the poor bastard.]

What have I done? :P

A man of average height, with bright red hair and a neatly groomed mustache saunters toward the group. He’s wearing colorful silks that appear to be well-made, but are rather faded and worn, as well as a large pack with several oddly shaped stones, bottles of unidentified liquid, and assorted other gewgaws prominently displayed on the outside. He bounds up onto a nearby rock, squinting in the harsh sun as his trinkets clatter against one another, and launches into speech.

“The name’s Orion O’brien the drian psion, and I’m here plyin’ my wares, buyin’ high ‘n’ sellin’ higher. Other merchants just be cryin’ when they spy my flyin’ lion,” here he points to a symbol on a faded pennant above his backpack that could perhaps charitably be read as a winged cat. “I’ve got crystals made of ions, I’ve got dandelion wi-ne, and a bit of psilocybin if you really feel enlightened. I tell ya I ain’t lyin’, so what’ll you be buyin’?!”

He finishes his patter with an obviously rehearsed flourishing bow, then ruins the effect a bit by nervously glancing around to take in everyone’s reactions and see if anyone is rushing to look at his goods. Seeing a lack of immediate response, he sighs and visibly deflates a bit, “well, anyway, I heard you lot might be going into the wastes in search of treasure. And I could sure use some new inventory – would you believe that picking trade goods based on how well they rhyme may not be the soundest business strategy?”

Also, the likes of trolls and fairies are familiar enough, but there doesn’t seem to be much info on what the hell a drian is or what they look like. Even the Hexplore it website doesn’t seem to have a race guide or anything, so I’m just rolling with the snippet on the race card and the first thing that came up when I tried to research the matter: 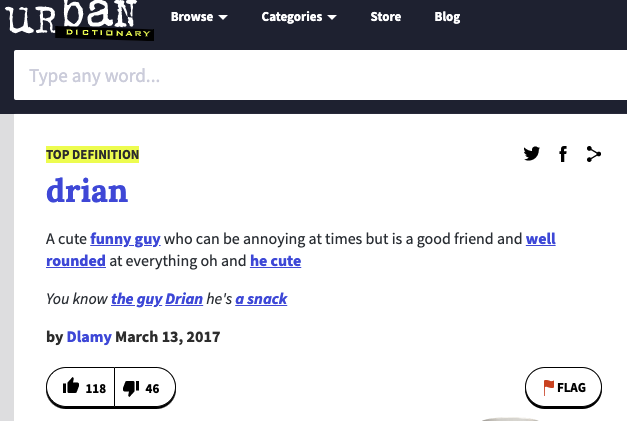 Drians are humans from the city of Dria. There’s also Nemsynese, Phororan, and whatever the Tarri city folk are called in the Sands race spread.

Also, the likes of trolls and fairies are familiar enough, but there doesn’t seem to be much info on what the hell a drian is or what they look like.

[OOC: Some art here! Mariucchi and co didn’t make it easy to find, though! IC, later, cuz this warriors game is way too close.]

The name’s Orion O’brien the drian psion, and I’m here plyin’ my wares, buyin’ high ‘n’ sellin’ higher. Other merchants just be cryin’ when they spy my flyin’ lion,” here he points to a symbol on a faded pennant above his backpack that could perhaps charitably be read as a winged cat. “I’ve got crystals made of ions, I’ve got dandelion wi-ne, and a bit of psilocybin if you really feel enlightened. I tell ya I ain’t lyin’, so what’ll you be buyin’?!”

This is awesome. Major hat tip