Either way, your new friends in Circumstance slot 2: 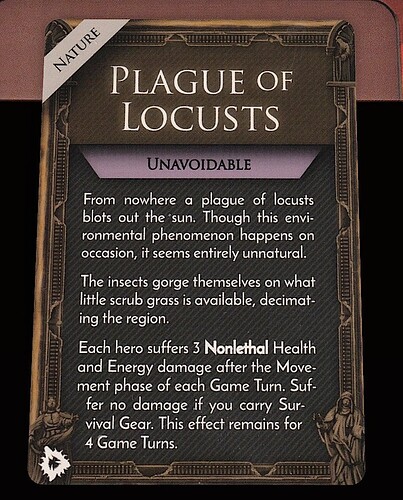 I will eat the food to avoid the heat exhaustion.

The reward for the scarabs seems weak for the pain we would have to endure, especially with our low skills, but happy to have a crack at them if the group wants.

Are we allowed to rotate the tiles as we wish when placing or is it fixed? Might be nice to flip the sand sea mission adjacent to our tile, then move normally adjacent to it so we can’t wander into the Boss, followed by a cautious move onto its space. Nice rewards for just one Navigate roll. Just a thought.

You can rotate as you wish when placing.

Are we allowed to rotate the tiles as we wish when placing or is it fixed? Might be nice to flip the sand sea mission adjacent to our tile, then move normally adjacent to it so we can’t wander into the Boss, followed by a cautious move onto its space. Nice rewards for just one Navigate roll. Just a thought.

I’m ok with this rotation.

Yeah, it would only take two rounds to take them out, but we’d definitely sustain some damage. That piercing effect and the 5 energy effect are hard to defend against at this point. I say we discard the scarabs (though the locusts are worse :(

There are a few tricks you could pull - e.g. Fairy ability lowering skill rolls, masteries forcing a particular action by the swarm - but I agree you’re probably not coming away unhurt. That said, 4 food is not nothing, and 4 gold might well buy a 5 food ration at the Caravansary.

Re: plans to head over to the Silt Sea mission tile: not to dissuade you - it’s not necessarily a bad idea to rotate it at least - but be aware the Ravager will spawn sometime in the next four Ravager phases, and when it does it will be on that initial HOTtile somewhere. if it emerges on you, guess who’s fighting the Ravager? If not, it might very conceivably block your way. It’s not super likely to pop up this turn but the odds go up considerably every subsequent turn.

I’m ok with this rotation.

Wait, what do the rules say, though? Do not violate the Sands of Shoe Racks!!!

Edit: Ah, I read the other post that says rules say you can rotate as you wish! So players should be discussing that upon each tile placement!

Rereading what Heat Exhaustion does, I noticed you can only clear it by eating food as though you were clearing a level of starving. So there is absolutely no reason to choose it over eating food if you have the food to eat. I’ll just assume everyone does so from now on.

@ArmandoPenblade , your racial ability permits you to spend 3 energy a pop to lower any of the above results by 2. Modifying a result to 1 does result in a Critical Success. Do you want to? If so, which roll(s)?

[OOC: I think I might like to change @Thraeg’s Explore result to a 1, giving him two Criticals and letting us choose a Circumstance. I propose that we pick The Soaring City pictured in Slot 1 in @malkav11’s post above about the board state.

I’m also onboard with the proposed rotation to let us make our way over to the silt sea location. Gotta take some risks to get some phat lewts!]

Ah yeah, that would be pretty good, wouldn’t it?

Nice! I was under the impression the ones had to be natural for a crit. Also if you don’t mind I would rather do it using my Shifter ability. The reason being I want my energy to be lowered so that when I restore some later I can improve my metabolic trait. For you it is not a once per turn ability so will not trigger Resonant.

The Soaring City would be awesome as the rerolls could safeguard against any instant annihilations!

[Sounds good to me, @Ormus – copycat away, you shifty shifter, you!]

I’m enjoying this so far! Please keep the posts coming!

I’ve debated buying one of these Hexplore It games and haven’t yet pulled the trigger. Which one would you guys start with? This one, or Forests, or the original game?

I was under the impression the ones had to be natural for a crit.

Nope. There are times when the game will explicitly say “a HEX result”. Only rolling a HEX will count for that. but critical success is achieved on a result of 1 (or higher, if your skill gets high enough), and modified results count. The Fairy racial ability is really good.

Does that mean we could use both our abilities to convert a 5 to a 1? Me not greedy no sir!

Domains of Mirza Noctis, currently on Gamefound. It’s pitched as being between Valley and Forests’ level of complication and looks super cool. But if you want one right now, probably Forests unless you want the easiest possible inroad, in which case Valley of the Dead King. (Forests is more interesting overall, IMO, but Valley is the most straightforward.) Sands is so many subsystems that I don’t recommend it as an onboarding.

I believe so, yes. I’m fairly sure you can only use the racial ability once per roll, but two people who can both use it…

The only thing with Valley of the Dead King is you get a lot of characters whereas Forests (which I got first) I found was lacking a little in that department. However despite that I would also recommend Forests first.

I’ve debated buying one of these Hexplore It games and haven’t yet pulled the trigger. Which one would you guys start with? This one, or Forests, or the original game?

[While the original is a very clear and fairly straightforward introduction to the game systems, it’s also a bit plain/simplistic. For instance, the Roles’ abilities are substantially simpler and have less interactions with each other and between Roles, IMO. The main way of taking down foes is pretty much just “punch head repeatedly.” Forests of Adrimon and Sands of Shurax both add a LOT of interesting content, but FoA is quite a lot to keep track of in your first game, and SoS is substantially more complicated than that. I personally think that FoA is a good middle ground, so long as you’re pretty boardgames savvy.

A major advantage the first game, Valley of the Dead King, has is that you get a lot MORE Roles and Races than some of the later editions, IIRC, so you have more variety between playthroughs, if you have a large group. I think it’s worth grabbing eventually just to add some longevity to your HEXplore It experience, even if you start with a different volume.

All this said, if you wanna wait a bit, the ongoing not-a-Kickstarter over on Gamefound for Domain of Mizra Noctis, a very blatant Curse of Strahd/Castle Ravenloft knockoff and fourth game in the HI line, dials the complexity back down to be much closer to VotDK, while still having lots of interesting new things to interact with, including a fullscale dungeon crawl!

edit: lol, or what the others said faster and shorter]

[@malkav11 this might be super obnoxious, so please feel free to disregard it, but is there any way that you could edit some extra game info into the first post in the thread so stuff we keep referring back to is easier to see?

I’m thinking the link to the characters Google Sheet, links to the manual PDFs, and maybe pictures of the major rules placards, at minimum, would be amazing. If you felt like being CRAZY awesome, I might even go so far as to ask that you maybe include links to the most recent “current boardstate/circumstances/etc.” post you make when that gets a full update (e.g., between turns, or after exploring, or whatever’s most convenient)?

“well, anyway, I heard you lot might be going into the wastes in search of treasure. And I could sure use some new inventory – would you believe that picking trade goods based on how well they rhyme may not be the soundest business strategy?”

“‘Ave ya considered sellin’ some lovely iron pans for fryin’, or a magical tincture fer to prevent ya dyin’? Mayhap a ‘ard steel lock, immune to pryin’? Travel with us; I’ve got more ideas fer tryin’, though if I said we ‘ad sense, I too’d be lyin’.” Chimminy looks thoroughly pleased with himself as the group sets off into the Wastes; he flutters high above the rest to catch a glimpse of what lies beyond the horizon, his eyes chancing upon a shining gleam there in the oppressive sun: the gleam of crystal.