It’s 16 gold for the Caravan journey - 4 per player. And shopping isn’t an action.

I agree that you’re not likely to make a lot of cash starting out in the Arena, but you might make some, it’s even possible you’d get more than you’d make just working for the non-role payout. And that will get better as you earn fame. But it’s just an option. (also, do recall you can mess with the roll by spending vitals.)

Woops, I had a dumb and forgot how to multiply :D

Well, in that case, leaves 6 gold over for non-caravan-related things, if just the two big earners, uh, earn. That’s maybe a Gear Upgrade apiece for the non-earners, or a couple of cheap items for the group.

I like Armando’s plan. Probably a decent idea to head back to the waste asap. If we entertain this turn and use Melhin to get back to the waste, we’ll have exalted rep with Nemsynet, and we can face boss 2 if we want to.

Yeah, we’ll be right beside a big crystal deposit, the (optional) harvesting of which will absolutely mutate Chimminy and probably most of us. Which, honestly, can be cool (and the crystals themselves are super handy), but there’s a part of me that wants to hold off on harvesting them till we can afford Harvesting Tools to maximize extractions-per-Irradiation/Mutation-hit.

We’re also pretty close to a Ruined Village. If we spend some of our excess gold on rations vs. other stuff (or if we feel up to facing Boss #2 and they grant a Food bonus upon defeat), we could knock out the next Phorora quest pretty easily – takes 8 food total. Involves some risky Roaming, but big payout in Power-Ups, and I like getting us closer to Phororoa, TBH. 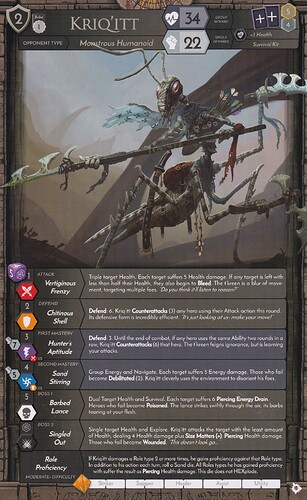 is boss 2. Note the Bribe option. Because we are using the expansion, Bribing Kriq’itt would gain him as a Legendary Ally. 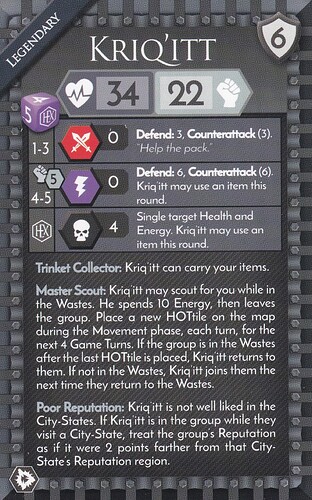 Also, uh…I totally forgot Reputation alignment gets you cheaper City-State items too, by one gold. So that Sphinx Blood Booster was actually 3g, and the Weighted Dice were 7g. Not Bazaar Items, though, so everything else was the same price.

Re: Remnants and the harvesting thereof: you’d definitely be Irradiated, which mainly is Energy Drain damage, reduced by food rating. You can just straight opt to gain a Mutation whenever Irradiated, it’s only a test (modified by food rating) if you don’t want one. (And they permanently reduce your max energy and you can no longer get Purity bonuses, so you might not. Quite a few are great, though, and they all give an extra point of a given stat when you get a Power Up for that stat, though.)

If you were to angle for the 100 platinum victory condition, Ravager Crystals will be crucial as they can buy you Gambling Dens, which earn the group 3 platinum per turn for each one, plus they’re stops where you can shop and gamble, plus they are the only place in the game you can exchange Crystals for platinum. (1:1) They are also important for Tarri’s victory condition of blowing up the other three cities, but I get the feeling y’all won’t be doing that one.

Apparently 1 Platinum/hero to Bribe, so not feasible currently, sadly; I’d love to have that dude flying around planing map tiles on our behalf. But I’d also really like his combat rewards :D

We can afford it if both Orion and I entertain. We can afford both that and the Waterskin. We’ll have 4 platinum at that point. And that would indeed be super awesome.

Chimminy hasn’t led us wrong yet! I’m on board with his excellent plan.

We can still kick its ass?

We can still kick its ass?

We can still thoroughly kick its ass! 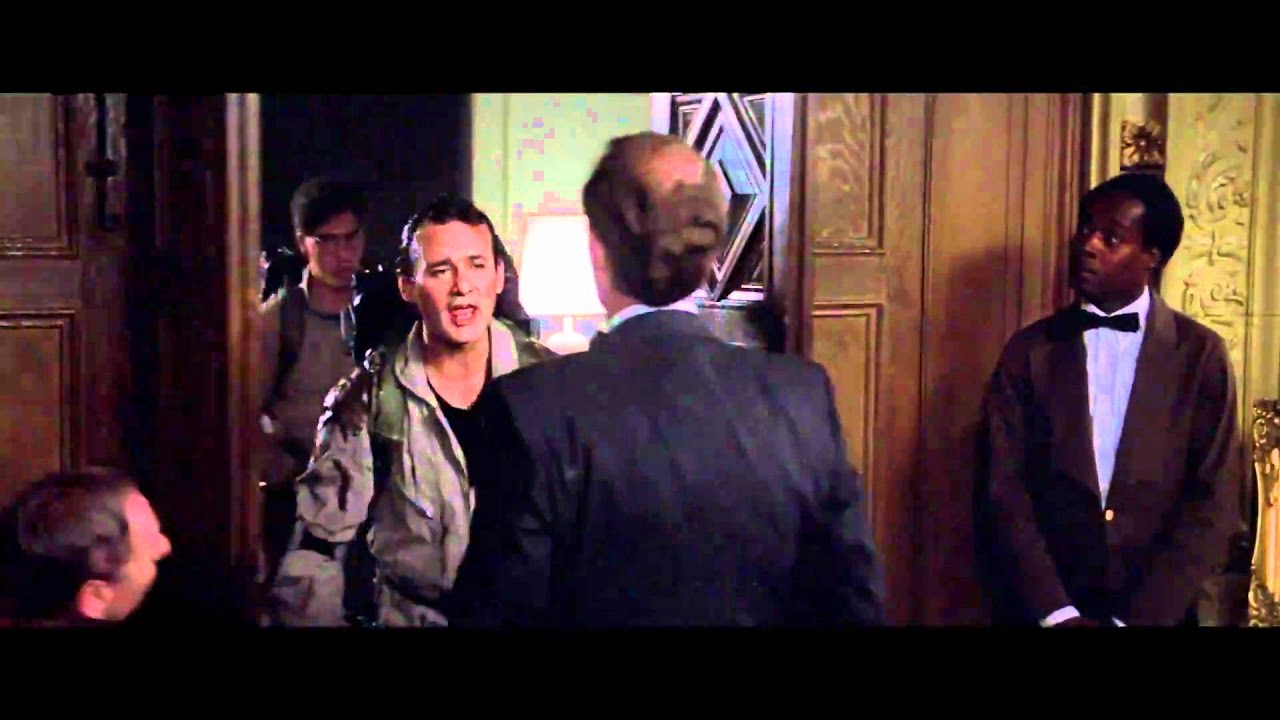 Happy to go to the Arena.

Okay, sounds like we have a consensus for Camping in Nemsynet again. So 3/3 healing (4/4 for those with Survival Kits, and Akbar ranks up Metabolic) and we skip to

Event Phase.
Sounds like the plan is for Cheya and Orion to Employ again, Akbar is up for the Arena, and Chimminy was possibly Schooling/Sparring?

Chimminy will School/Spar, if others who are earning don’t mind sending gold his way. Attack is pretty effective since his offensive Mastery effectively doubles any bonuses there, but Explore is handy in many ways and cheaper. Energy, I’m less concerned about atm. Doubt I can afford more than one and leave cash for a Caravan trip without some serious Arena luck for Akbar.

Having discovered my error on the reputation bonus re: shopping leaves 2 gold collectively for the party before the next round of income, so with the rep bonus on schooling I think you’d conceivably be able to afford 2 ranks of Explore. Worth waiting til the Arena results though.

First things first, here’s the HOTtile from that Territory Map: 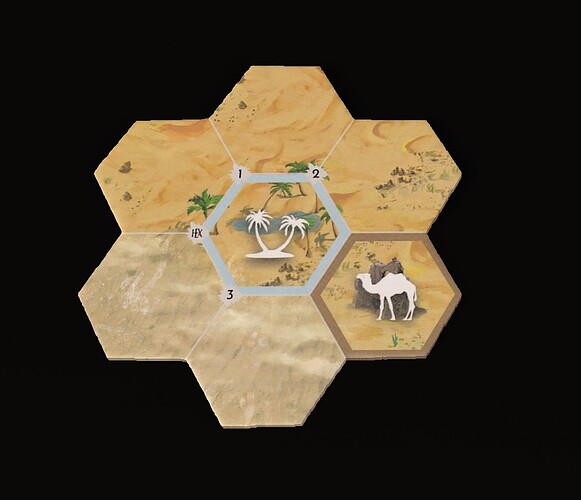 As far as event phase actions:
Cheya and Orion work as entertainers, garnering 11 gold and 1 platinum each. (again, platinum is a group resource). Reputation move towards Nemsynet?
Akbar competes in the Arena!

Arena Round 1:
d10 to determine Event: 5. Harrowing Trial! 4 feats required. Stat tests possible are Health, Explore, Survival. +2 to all tests due to Size Matters. Reward currently 5 gold.
I’m going to select tests with most likely to succeed first, but @ormus let me know if you want to take damage to try for a success on any failed rolls.
Akbar tests Health: needs 8 or less. Rolls 9 + 2 = 11. Critical Failure. Will go ahead and drop you 3 energy to make that a success instead because you’d lose that 3 energy either way. So, 1 feat gained
Rolling an occurrence: 3d10 added together is: 6 + 2 + 9 = 17. Misstep. 1 energy drain and -3 to the reward, putting it at 2 gold. Additionally, you are at another +2 to the next roll.

What a shitshow! Sorry I posed that possibility, guys. Good news is, unless you are competing in Tarri’s Arena, or something modifies it, if you die in the Arena you are revived with 1 health and no energy. So Akbar doesn’t actually permanently die. Also, I played all that out in the interests of saving thread time and because I think the decision space is fairly confined, but if folks want to use Orion’s Weighted Die or a Floating City reroll on any of the individual dice in that I can regame it from that point. Similarly, Chimminy could intervene or Akbar could spend more vitals to claw success out or both, in theory. Unfortunately I think the failing rolls were nearly all very high. :/

If we are keeping these results, Chimminy can still go Schooling/Sparring or could switch to Employ and just rethink the shopping list a bit.

It can go next to any of the existing tiles in whichever orientation. Let me know what you’d like.

Man, when we’ve got like 10 more Power-Ups apiece, we are gonna fuckin ROCK the Arena :D

If we are keeping these results, Chimminy can still go Schooling/Sparring or could switch to Employ and just rethink the shopping list a bit.

I’m glad to go to work and earn more money to buy more healing items with if that’ll help Akbar out; the proposed Explore improvement was almost exclusively gonna be made to make tests slightly easier, but I’d hate for a low-health Akbar to get one-shot on a Caravan Event en route to the Mission space :-/

Man, when we’ve got like 10 more Power-Ups apiece, we are gonna fuckin ROCK the Arena :D

So, assuming we wanna continue the Phorora questline (I think we should, based on how easy the next step is to complete), I think we should aim for a Ruined Village. Since I think the Ravager disappears underground again this turn, I feel safer targeting the one in the southwestern portion of the revealed Wastes area than the one up in the Northeast (since we could theoretically Roam into the Boss#5 encounter there, although it’s unlikely). Mind, even this way, there’s still good odds we wander straight into a crystal deposit and Kickstart mutations :)

As far as positioning, if the others are okay targeting that area, I’d like to twist the HOTtile such that the caravan hex is facing up-right, and nestle it in right up under-beside the ruined village. I, uh, think the spacing works out for that. It would make the majority of the new HOTtile down as the new far southwest of the revealed area. My main goal is to make it such that when we go Roaming, there’s good odds we’ll uncover more HOTtiles (and buy ourselves more time) by having as many of the possible directions be into unexplored territory.

Since I think the Ravager disappears underground again this turn