Playdate, a handheld console with a crank controller

I confess I was sort of hoping the crank was how it was powered.

That would be very hard to pull off physics wise in this small of a form factor.

A lot of people here seem to be surprised that people would spend $200 on a niche gaming console when you could instead get an emulation machine or “real” handheld.

To a certain class of person, this makes no sense.

This product is a celebration. It’s all custom hardware, every single part, and they wrote their own operating system. Why would you do that? Why is this not running Linux or a Raspberry Pi or something sensible? Because the company is ridiculous, the people are insane, and this is an amazing thing that should not exist but does.

Call it hipster or whatever, but Panic just seems like a good company which has been low-key successful for decades by just creating good things without over-extending themselves. Then they lucked into mega success with Firewatch and Untitled Goose Game, and decided to use that success to fund something goofy they’re passionate about for fun.

They all seem hyper competent along the way - despite the Playdate’s inherent limitations, everything else they built around it: the SDK, side loading capabilities, Pulp (the web-based game dev tool), their partnerships with well known indie devs, and more just seem like they’ve taken a super thoughtful approach to make this weird passion project as successful as it could possibly be. And so far, they seem to be getting rewarded for that hard work.

Bit surprised it isn’t backlit. The only other hardware miss is no click resistance or anything on the crank, it just spins freely.

Hope some awesome weird games come out for it. Boutique is fine.

Wait… this is the group that made Firewatch the game?!

Wait… this is the group that made Firewatch the game?!

I got thrown for a loop too when folks were mentioning that. It looks like Panic has gotten involved in game publishing, not necessarily game development

Yeah, they published Untitled Goose Game and Firewatch, after creating Mac productivity software for over a decade previously. 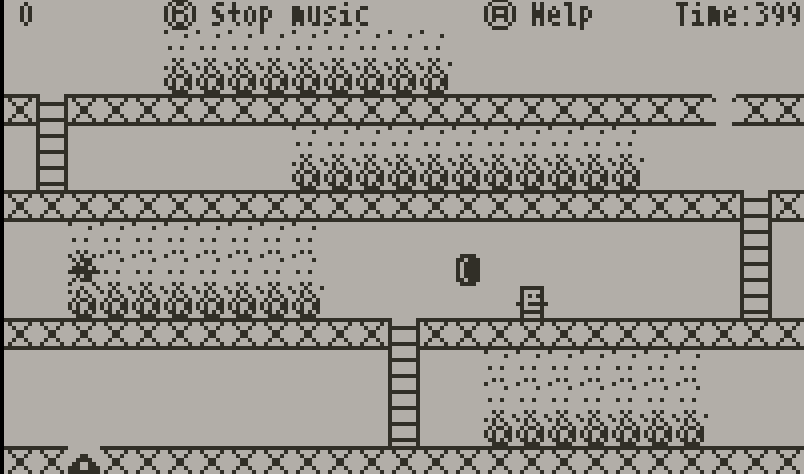 A quick look at the Playdate games on Itch.io

Part of what's so exciting about Playdate - and weeks in, I am still excited about it - is the fact that it's been conc…

Honestly, this continues to be the first handheld that makes sense to me as a desirable device. Just because it goes for a different experience you can’t have anywhere else.

Kind of envious. Like I said, I’ve never seen the appeal of a handheld, including now that I own a couple. But this one? I see the appeal. It’s a weird quirky thing. I wish I had one.

So how are you liking it?

It’s such an odd little thing. I like it, but it’s odd.

I think I like the gimmick of a “season” of games, but it makes first impressions a little weird when I’ve only just gotten access to the third and fourth games.

The first was a very simple arcade-y game, the second was a very simple photography adventure game. The third and fourth that just unlocked this week are a silly, puzzle-y side scroller, and a simple audio sequencer.

They’re all very lightweight games. They wouldn’t literally all work as Warioware mini games, but they have that kind of whimsical feel. Nothing I want to play for more than 10 minutes at a time, but also I do keep coming back to them for more little chunks of gaming.

The hardware looks and feels great, though ergonomically it’s only suited for these quick sessions.

Two biggest problems: everyone mentions it, but you really need good lighting to play it. And the second problem is the screen is awfully small for some of the text. This has only been an issue in one of the three games so far, but I still have better than 20/20 vision (in one eye) and it’s right up at the limits of what I can read comfortably.

I would describe it overall as “thoughtfully quirky”.

The playdate twitter account has a thread going where they highlight interesting games (mostly) available to side load.

@playdate
⭐️ Hey, how about a thread of third-party games being made for Playdate?

@playdate
Side-loading a third-party game onto your Playdate is very simple. ① Login to your Playdate account at play.date, ② Go to the "Sideload" tab, ③ Drag and drop a .pdx or .zip. It should download within an hour, or you can go to Settings > Games to download now. https://t.co/wnz9MKShR1 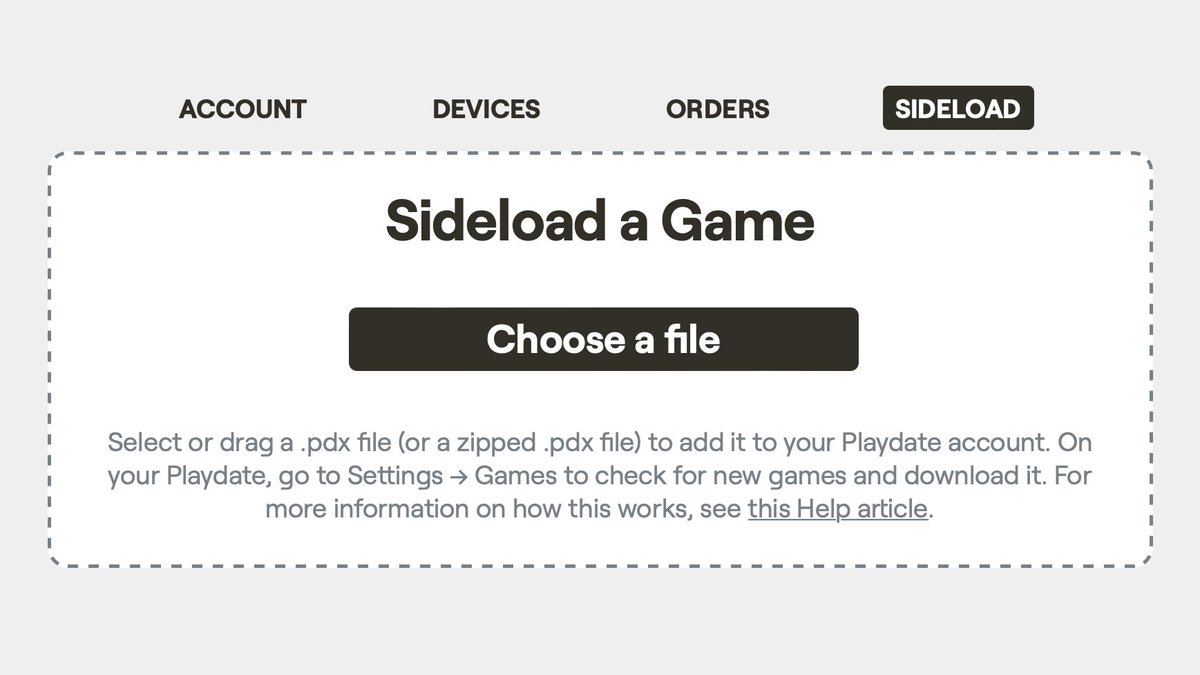 @playdate
First up is Bloom, the first "commercial" Playdate third-party game! Bloom is a narrative-driven social sim about starting up a flower shop, with gorgeous art and fantastic music. It's very special and deserves great success. $9.99, from@RNGParty. rngpartygames.itch.io/bloom

@playdate
Sketch, Share, Solve is something we've always wanted — a nonogram puzzle game for Playdate. We really love these. You can even draw and export your own puzzles for your friends. Name your own price (but be generous!) from@veubeke. r-d-k.itch.io/sketch-share-s…

@playdate
Bomber Panda is a bomb-based action-puzzler with different power-ups and 31 levels. We don't question why the panda is in those boxes $2.00 from Rob Seto-Patchett. rob-seto-patchett.itch.io/bomber-panda

@playdate
We are very excited about the idea of Playdate productivity apps, so Pocket Planner is a dream come true. Make to-do lists. View a calendar. Record voice memos!! Bust this out in a meeting for ultimate success. $1.00 from@kamilpowalowski • hydra-softworks.itch.io/pocket-planner

@playdate
And then there's the incredible "Playnote Studio", a modern and super-polished way to view wonderful Flipnote animations created on the DSi. Use the crank to scroll through frames! Free from@rakujira • playnote.studio https://t.co/F4KT7N4l8w

@playdate
And then… then, my friends… there’s “A Joke That’s Worth $0.99”. There’s nothing we can add to this very important video. Which you absolutely must watch now with sound on. Coming soon from@kamibox_ph • https://t.co/SvUWYs1olX

@playdate
Tapeworm Disco Puzzle is, well, exactly what the title promises—a groovy puzzler where you crawl-dance through 100 challenging levels. The night is yours! (some worms are nocturnal) 🪱🕺🧩 $9 from@Wallmasterr • lowtekgames.itch.io/tapeworm-disco…

@playdate
Down the Oubliette is a dungeon crawler with a tower-defense mechanic. Are you brave enough to take on spooky ghosts? We've always believed in you. 👻 $5 from veubeke • r-d-k.itch.io/down-the-oubli…

@playdate
BRAAAINS! It's the name of a brand-new trivia game for Playdate, with pass-and-play multiplayer and daily challenges. Enjoy your meal 🧠 $5 from@funfunfunstudio • braaains.game https://t.co/NXK7E6Paye

@playdate
@funfunfunstudio Playtime is an incredible collection of more than 40(!!) clocks for Playdate—from readable and useful ones, to funny and experimental creations. Essential and wonderful! The time to get it is now ⏲ $1.94 from@adamsimmersive • adamsimmersive.itch.io/playtime-weird… https://t.co/EXisACXCvc

@playdate
Eyeland: what a gorgeous little adventure! Every frame of it a painting. Take a peek 👁 $2 from Ron Lent • ronlent.itch.io/eyeland https://t.co/ePccYWOojf

I don’t have a Playdate but I noticed itch.io has a tag for it:

That’s a lot of stuff to check out! Almost makes me want one…

Edit: my girlfriend loved the original Game Boy and prefers mobile gaming with quirky oddities… hmm, this could be a cool present.

The “A Joke Worth $0.99” video did the best job possible convincing me i’m not the target audience for Playdate.

Got the email this morning that my Playdate is on the way!

Found out today that indie devs were being invited to make games for the Playdate in 2014. They spent a long time working on this thing before they announced it.

Mine arrived today! It is such a neat device. I expect most of the games to be trifles. Curious to see if there is any kind of “killer app” and, if there is, what it might be like.

I’m curious it hear how your hands deal with it. Do they cramp after very long or do you get hand fatigue?

That’s why you have a manservant wind the crank.

It’s not exactly ergonomic, but at the same time, it’s not heavy at all and it can easily be grasped in one hand (like for games that are all driven by the crank), so I feel like that makes a difference. Ultimately, though, I don’t think it’s going to be a platform I spend six hours straight on, so I doubt it matters.