Rumors about Lockhart seem to be around a lower GPU performance (as well as memory). I wonder if this is an attempt at a cost competitive advantage against the PS5 to take advantage of binning.

I dunno about the cost estimates. I’ve seen claims that Sony initially lost over $100 on each PS3 at launch. That seems insane, but apparently the costs related to the Cell architecture dropped quickly over the following months.

They were losing nearly $300 per unit when the PS3 launched. The Cell cost wasn’t that big of a problem, it was very early in the production of Bluray drives, and the design included the full PS2 chipset.

So exclusives are not the driving factor here.

It may be close, but I would say price is the #1 factor in purchase decision.

The Xbox One S has been cheaper than a base PS4 for the vast majority of the generation. PS4 still massively outsold it.

That’s the point actually. A completely custom chip means they either have to over-spec the chip so they can bin lower to get higher yields, or they have to be more expensive because any chip that’s not close to perfect has to be thrown away.

Lockhart makes it so that any GPU chip that doesn’t totally meet the quality of the top tier can be binned down for the lower tier, thus making the overall economics less expensive and get higher yields.

No, I mean reportedly Series X and Lockhart use different chip designs completely. There is no binning happening to recover Series X chips for use in Lockhart. Both have redundancy built in, though. There are 56 physical CUs in the XSX GPU, for example, but only 52 are active to allow for defects.

Lockhart also uses a different memory bus and motherboard so there is actually a cost and complication in managing two distinct production lines and trying to anticipate relative demand.

Oh, well there goes that theory then nevermind!

IMO Series X and Lockhart being entirely different parts leans me to believe MS thinks Series X is going to be expensive, and that they’ll need a compatible, but much cheaper, alternative.

Meaning that the 360 essentially did better than the PS3 everywhere except Japan, which will not buy non-Japanese consoles.

I think PS3 did better in Europe too, 360 was just way ahead in the US.

this is VGChartz so who knows how accurate 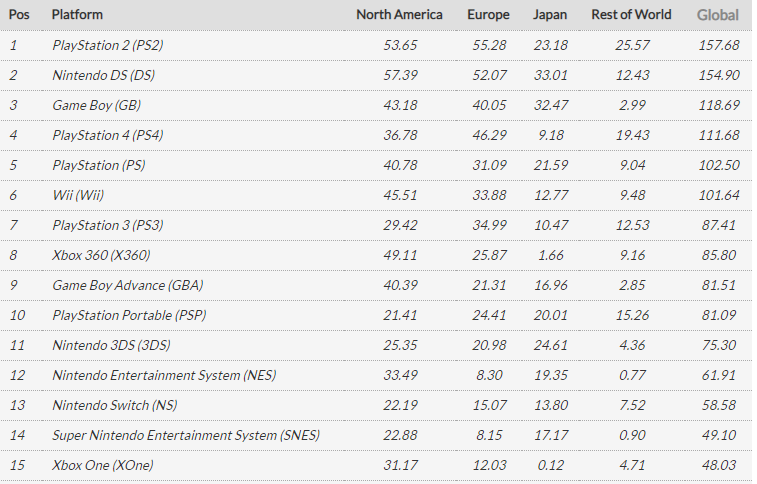 Interesting. Surprisingly low PS4 numbers for Japan. Have they lost their taste for big-console TV gaming?

Those PS4 numbers for Japan are accurate, at the very least, per the weekly Media Create and Famitsu sales charts.

It’s a combination of console gaming having fallen off a cliff over there years ago and the utter dominance of the Switch.

2K has announced that NBA 2K21 will cost $60 on current-gen consoles as usual, while the next-gen versions will cost $70

I think PS3 did better in Europe too, 360 was just way ahead in the US.

Yep. With the exception of the UK, PlayStation has always been way ahead of the respective competitors across all generations in Europe.

It’s the move from 30Hz to 60Hz. All those extra Hertz cost them 17% more in development costs.

Saw the usual vitriol on game prices constantly going up.

I have sympathy for those that must be frugal.

But still, no one takes inflation into account, ever. They were reminiscing about the Xbox, PS2, Gamecube Era when new games were only $50. In 2002. And adjusted for inflation, $71 today.

@Deadline I had an old Roberta Williams game on Apple ][ from 1982 that cost 100 bucks back then. It came on six double-sided floppies!

It’s true that game prices adjusted for inflation have dropped over time while production costs greatly increased, but the market has grown tremendously and distribution costs are dramatically lower with many downloading games and any physical copies in DVD cases rather than giant boxes with multiple floppy disks. In many cases when the studios have their own digital distribution platforms, costs can be rounded down to zero.

All of that is besides the point, though-- they’re raising prices, flat-out, and people don’t like that. No amount of explaining about inflation-adjusted costs and whatnot will change their minds.

Actually inflation has been very low. We’ve been in a (nearly) deflationary economy ever since the 2008 financial crisis, which is why interest rates were kept so low, to try to force inflation, and yet over the past decade it’s hovered between 0% and 3%, with most years under 2%.

Contrast that with wage growth, which has been pretty steady around 3-4% for the decade in the US. So I think it would be fair to say real wages adjusted for inflation were stagnant, or nearly so.

Obviously that all went out the window as of March of this year, wages are way down now. It remains to be seen how we recover from this incredible disaster. It certainly is a bad time to raise prices from an optical perspective.

It certainly is a bad time to raise prices from an optical perspective.

Honestly I think they’re only doing it because they’re the only NBA game in town. There’s zero competition, so why not milk what you can from people who really want their NBA fix?

I haven’t seen any indication that other publishers are following suit with a price increase.

In many cases when the studios have their own digital distribution platforms, costs can be rounded down to zero.

That won’t be the case on consoles though?

There’s zero competition, so why not milk what you can from people who really want their NBA fix?

Did EA cancel theirs again?