There are definitely minor differences. PS Now includes streaming at the base level, while that’s a Game Pass Ultimate upgrade. PS Now also allows multiplayer without PS Plus for titles in the library, while Game Pass still requires paying extra for Gold/Ultimate.

Yes, I agree. I didn’t rehash it because it is all discussed a few posts upthread.

Does PSNow include multiplayer support? Because Gamepass ultimate essentially includes XBox Gold as part of its feature set. I thought you still needed to buy PS+ if you wanted to do online gaming on the PS4/5, regardless of whether or not you had PSNow. If that’s the case, that’s a big caveat folks need to know about. Like, if you do a bunch of online gaming, and can only afford one of the Sony plans, you probably need to go with PS+, if that’s still how it works.

Gamepass Ultimate is probably one of the best deals in gaming right now, given that you can get 3 years of it for only $5 a month.

It’s kind of a hybrid. I believe you don’t need PS+ for the games that are on PSNow. So for example, if you get Bloodborne through PSNow, you don’t need to get PS+ to see the messages left behind by other players. However, if you buy Bloodborne, you DO need PS+ to see the messages on the ground. So you sort of get the multiplayer online portion of the games that are on PSNow without getting PS+. But I don’t think you get multiplayer services for games that are NOT on PSNow, so it’s not a one to one equivalence with Game Pass Ultimate.

Ya, and PSNow is mainly Sony’s old back catalogue of old games, rather than new stuff (unless they’ve changed this), and generally online play is going to be more important in new games because the online community of games tends to peter out over time.

So if you do much online gaming, sounds like you still want to get PS+.

Sony may end up merging their stuff though at the future to match parity with MS… has there been any word of that? Seems like a natural progression.

Gamepass Ultimate is probably one of the best deals in gaming right now, given that you can get 3 years of it for only $5 a month.

Ehhhh. Not really. I tried to do this for my kid last week and there’s a “conversion rate”. I don’t know how many months of gamepass she actually got when I converted 3 years of Gold.

Sounds like you did it in the wrong order.

I just saw this and thought of this thread, but IGN has a promo code to get one a year sub for PSN Plus @$35 (instead of the usual $60).

Save on all things PlayStation, including PS4 and PS5 games and accessories.

Some other great deals there, including The Last of Us 2 for $30.

I saw my first PS5 on a shelf today. At the prescription drug store of all places.

Sounds like you did it in the wrong order.

Ya, it’s what makes it unquestionably the best deal in gaming right now.

If you do not currently have a gamepass account, (or if you have one, but let it expire), then when you start it up, XBox Gold time will convert at a 1:1 ratio… which means that you can buy 3 years for $180 (or potentially even less, if you get the XBox gold cards on sale), which ends up being $5 a month.

Even at the normal price, it’s still only $15 a month, which is still a good deal given the library of games, ability to play on PC or consoles, and cloud streaming to Android/iOS/Chromebooks, plus all the stuff from XBox Gold.

I feel like it’s only a matter of time before Sony moves in a similar direction though.

For sale? Or did someone trade it in for their insulin?

I remember seeing a PS3 for the first time in a store in drug stores as well. I think it’s just a matter of less people looking there for one.

When PS4 had that 199 sale all over the place… seemed like every retailer had it. I mean it was everywhere which made it easy for me.

What? You have drugstores that sell things besides drugs, food, and cards?

Most drugstores have some little section off to the side where they sell electronics, and yeah, usually they have game consoles there… And like, 5 random games. It’s weird.

Don’t forget the random seasonal stuff. It’s like where you go if you don’t selection but just need some random holiday plastic.

7 Elven used to carry games, consoles and Magic Cards too. (okay probably other card games too but I remember the clearance on Magic).

Yeah, Walgreens, CVS, RiteAid type places all have these sections with random stuff, including electronics. It’s usually behind the counter somewhere and you have to ask for it. Especially in small towns, this is the only electronics section unless you want to drive to a suburb or a big city.

I’m still trying to get a PS5 all these months later :-( Following Wario64 hasn’t helped since every link I follow within 30 seconds is always out of stock

My son has had about a day with his PS5 and I finally asked him for impressions, this is what he sent: 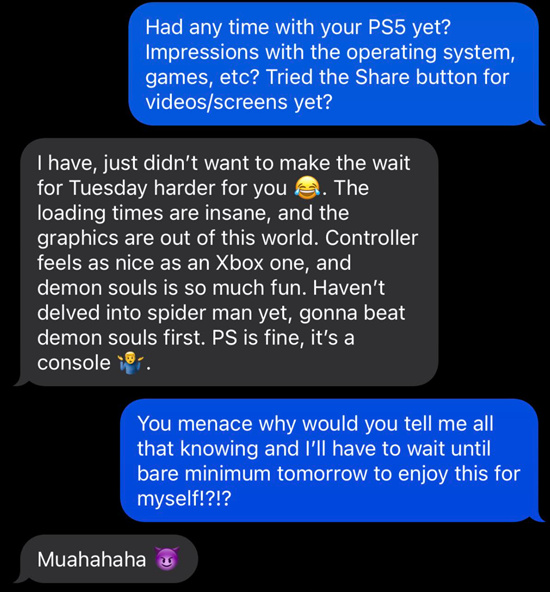 I am heartened to hear his comments on the controller - he and I both dislike the “feeling” of the PS4 controller and prefer the Xbox One in that area.

Hasbro’s popular Marvel Legends line of action figures—6" action figures pulling from everything to obscure comics to movie versions of characters—often have retailer exclusive figures. It always blew my mind that they would offer exclusives to Best Buy, Target, Walmart, GameStop, Toys R Us (RIP), and Walgreens of all places.