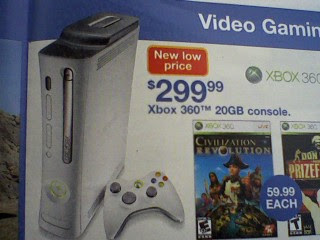 This appears to be a $50 price drop on the Premium, bringing it from $349.99 to $299.99, and the screenshot above allegedly comes from an upcoming Kmart circular.

These circular-related announcements have tended to be pretty credible in the past, especially when they have screenshots.

(Remember, the $100 price drop on the PS3 was first discovered in a Circuit City ad, leading to legal pressure from CC and Sony against Cheap Ass Gamer and Speedy1961. That leaked news, in turn, forced Sony to institute the price drop a week or two earlier than they’d planned.)

They need to put out a new model at that price with a 80GB hdd. Rock Band needs room!

Or, the price drop should be to $249. Based on recent NPD numbers, the 360 is really losing momentum, and a larger drop would make the numbers shoot back up.

Tempting, maybe if they drop the premium’s price too… though I think I’d almost rather get a wii (if I can find one).

Tempting, maybe if they drop the premium’s price too… though I think I’d almost rather get a wii (if I can find one).

That is the premium, or did you mean the Elite?

Microsoft confirms that the new pricing scheme will be:

Although, it should be noted that Amazon started selling the Elite this week at $400, which would be a much better price for it across the board. Of course, at these prices, I have no idea why anyone would buy the Arcade anymore. Which is a shame, since I really need one. The arcade would be perfect for me, since I bought a 120 GB drive and a VGA cable and have my 20 GB and a component cable sitting around, both things not included in the Arcade.

Oooo, you got them! They’re a company that makes money! If I ever make a lot of money, you can feel free to spell my last name River$. Trust me, I’ll enjoy the insult.

Pretty solid rumor has it that the price drop on the 20GB Pro is actually a liquidation price, much like when Sony dropped the price on the 40GB PS3 a year ago. From what I’ve heard, the 20GB is being phased out and officially replaced by this new 60GB model.

Edit: It’s not a roomah.

Wow, dropping the 20GB SKU after these price cuts is a really stupid idea. I get that they want to boost available hdd space so people can buy more XBLA games, movies, tv shows and such but they need a real price cut in the very near future and this isn’t it. As much as people complain about the 20GB hdd being a bit small considering all the downloadable content that exists, even 20gb is pretty much infinitely better than no hdd at all and having a sub-$300 unit with a hdd is critical if they don’t want to continue the slide that is going to end up with them in 3rd place at the end of this generation (and if they don’t get the price down I think this will happen despite the 360 having the best software library, sadly).

That $1 billion write-off might well have been the mark of doom for MS in this generation, if it made it politically impossible for them to sell a bigger faster price cut inside the company. Because yeah, the 60GB model should damn well be $249 by this point, and the Arcade model should be $199. THEN you’d see some momentum.

But they obviously think they have to stay slightly more in the black on a per-unit basis, and that’s going to screw them. Sigh.