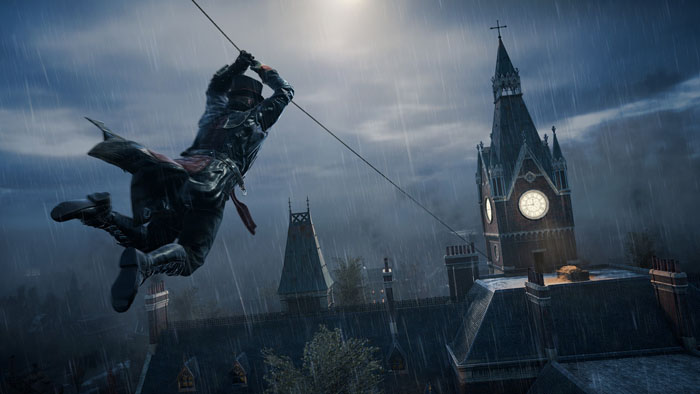 Tom Chick and Jason McMaster get Victorian on your ass. Join us for a discussion of Assassin's Creed: Syndicate, with a chaser of Starcraft II: Legacy of the Void..

Now whenever Tom makes the argument that Dwayne Johnson is a better actor than Harrison Ford, I'll always picture him acting out Star Wars scenes with his Millennium Falcon toy and The Rock action figure while making pew pew noises.

This is a rare occasion where I have actually completed the game you guys are talking about! I'm usually so behind the times, but AC games usually get me to find my wallet on release day. I think I mentioned this in the AC thread, that I have this kind of weirdly inverse appreciation than most folks who play the games - I really enjoyed AC3 and Unity, and have been less interested in Black Flag and Syndicate. Not because they're bad - I mean they're AC, you know what you're getting - but that they don't have much new and interesting going on besides the setting. Fortunately I don't have my own website where I post reviews, all the "FUCK YOU POGUE" comments would probably make me cry.

That's how I visually demonstrate who would win a fight between The Rock in his wrestling briefs and Harrison Ford in the Millennium Falcon!

You liked Unity better than Black Flag and Syndicate? FUCK YOU POGUE.

I'm always glad to see a fellow AC3 fan. That one really clicked for me.

As an AC3 fan, you already have access to the best thing Black Flag brought to the table: ship-to-ship combat. Unless you just really always wanted to be a pirate which, ok yeah. Syndicate isn't bad, I liked it enough to play through (including Jack the Ripper), but it also seems kind of "me too", with the Batman grappling hook and car combat, I mean buggy combat. Though I really did enjoy the villain in Syndicate, I kept expecting him to drink my milk shake.

Yeah, I think my main problem with Syndicate -- and I wish we'd gotten into this more on the podcast by way of context -- is that it doesn't do anything I can't get better in Arkham Knight, Mad Max, or Xenoblade Chronicles X. Those are all three fantastic open world games for how they each excel in a unique niche of open-world gaming. Why would I bother with Syndicate while I still have stuff to do in those three games?

My MP3 player glitched out when Tom was talking about being against children's liberation. His voice got all low, staticky, and creepy. I thought it was an intentional effect.

Did I miss the Christmas thing teased at the end of the Xenoblade Chronicles podcast?

If you mean McMasterpiece Theatre, it will be in two weeks. The actors require extensive rehearsal time.