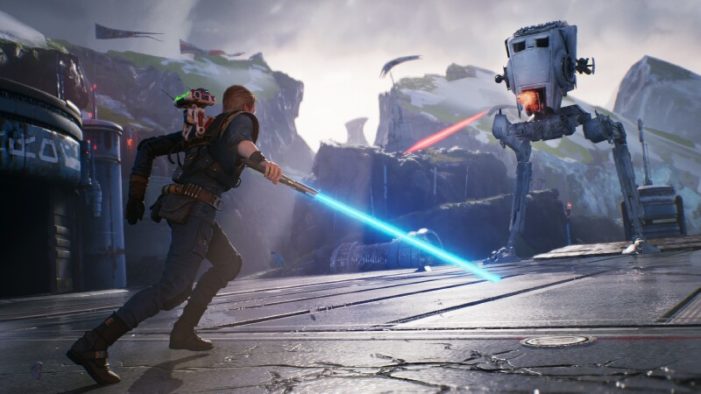 In ten years, will you remember Norman Reedus, an awkwardly fuzzy antelope, or Cal whats-his-name?

He should be thankful the lightsaber in game causes no damage to the player. ;)

I have been listening to @Jason_McMaster for years on this podcast and not one time has he ever disclosed whear Mankrik’s wife is.

Ha! I couldn’t watch him play on Wednesday because he was slightly ahead of me.

Also, he never explains why the beach things are called “beach things” when it sounds like they should be called “tar babies.”

Nick is back to playing crappy animal prison tycoons, yay!

I don’t understand how Tom got a “thumbs down” or where he pulled it from, from Jason describing Spintires on foot (with a lame last 10 hours that can be skipped, as he pretty much said). That walking and stumbling simulation was sweet, even to simply watch.

Oh, I can explain that – a “beach” is what the game calls the inbetwen life and the afterlife, so like whales thrown up on a shore, beached things are ghosts stranded in our world. It kinda makes sense, if you squint at it.

I haven’t hit the bits Jason found frustrating yet - and given that the toy I just got access to turned the game into Zipline Tycoon 2019, I don’t expect I will anytime soon - so I’m all in on Death Stranding. I love playing in a open world where geography is actually the crux of the game, instead of something you hoover up icons in.

Also: @Jason_McMaster I just want you to know, I saw what you did there, and I appreciate it, even if your churlish co-hosts are too slow on the uptake to notice.

It always amuses me to discover all the little ways we all differ in what we take away from the games we play, in this case listening to the three guys talking about how they were so over all the puzzles in Fallen Order, and they could get back to the combat. I love the puzzles! I like the combat too, but I think I really like the sort of peaks and troughs in tension and gameplay that they achieve together. Put another way, I am sure I like them together more than I would like either without the other.

I don’t understand how Tom got a “thumbs down” or where he pulled it from, from Jason describing Spintires on foot…

To me, it sounded like he was describing an interesting game that just got randomly weird. I guess I have a lower tolerance for weirdness, so that sounded to me like a complaint. But to be fair, he didn’t claim it was a thumbs up. Which is like getting a 7.8 on the 7-9 scale.

Also, he made me less interesting in play Death Stranding, so that kind of game across as thumbs down-ish for me.

I’ve fought AT-STs twice now. One I killed on the second try. The other I killed on the first try, and that was even after a few waves of other baddies. They have three types of attack, two of which are easily countered to damage the AT-ST, and one which is easily avoided. I suck at boss fights, but these boss fights have been pretty obvious and, ultimately, easy.

Not that I’m complaining. But there’s just not a lot of pushback in the game. Thanks, Electronic Arts!

I love the puzzles! I like the combat too, but I think I really like the sort of peaks and troughs in tension and gameplay that they achieve together.

It can’t be an easy balancing act for the developer, and I certainly hear what you’re saying about peaks and troughs. That’s a hallmark of good storytelling, isn’t it? But for me, I think I’ve just played too many Tomb Raider games, so I feel like I’ve seen all these puzzles in some form or another. And in this game in particular, there’s just too much cognitive dissonance in being a bad-ass jedi one moment, and then a dumb-ass videogame player who can’t figure out how to get a candle under a waterfall the next. Put another way, one man’s peaks and troughs is another man’s herky-jerky starts and stops. :)

Put another way, one man’s peaks and troughs is another man’s herky-jerky starts and stops. :)

Oh I’m in the minority here, I know that. Probably a pretty darn small one. And I’m ok with that. I think mainly what I really appreciate is variety in the experience, if games tend to hit just one or only a few notes then I’m less likely to stick around. In this case, I’m enjoying the ride, probably be a little bummed when it’s done.

I guess I have a lower tolerance for weirdness, so that sounded to me like a complaint.

Also you’re not only piloting a truck with a pilot, but also the driver himself most of the time in Death Stranding, and I remember Spintires/Mudrunner lost of quite a bit of its attraction to you when the human factor came in.

But as the last third of the podcast showed, you are still under Control’s spell, and aren’t qualified to play anything till the end of the year!

That puzzle with the candles and waterfall you mentioned. I got stuck on that for several hours. I thought you were supposed to throw the candle holders at the glass sphere and that I just wasn’t throwing them at the magical spot where they were supposed to go.. It definitely slowed momentum way down — I did get a lot more practice in combat against the big beastie on the ground floor and the two automatons though, and managed to go up quite a few levels while racing around that whole area trying to figure out what I was supposed to do.

I just wasn’t sure if my approach was wrong or if I just wasn’t executing it correctly. As a related example of right approach, wrong execution of approach, I discovered when swinging from one rope to another if you hit the drop bottom when letting go of the first rope you can then grab the second rope whereas if you hit the jump button to let go of the first rope you do a double flip and just miss the second rope. I spent a long time thinking I just wasn’t releasing at the right time, when it was actually I was supposed to hit the “O” button instead of the “X” button — they both released me heading in the same direction, but one of them resulted in me just being far enough away to miss the next rope.

I would have liked it better if there was more combat and less jumping and puzzles.

I feel that in general the jumping and puzzles slow down the game so much that the story just feels disjointed. Long hours of platforming followed by a 2-minute cut scene doesn’t lead to a very gripping story.

That puzzle with the candles and waterfall you mentioned.

That one will stick out in my memory, because it’s one I eventually had to look up. The one that beat me. I feel a weird combination of dumb and angry when I end up having to look up a solution on the internet. Dumb that I couldn’t figure it out, and angry that the developers expected me to figure that out.

Overall, I just don’t like puzzles because, invariably, I’ll run into one that turns into a torturous bout of trying to read the puzzle designer’s mind. Even with the BD-1 hints for the waterfall and candles, I couldn’t figure it out because I hadn’t realized how the blue suspension forcefields work. I’ll accept partial responsibility for that, but I also partially blame the game for not teaching me that particular “verb” in its arbitrary puzzle vocabulary.

I also partially blame the game for not teaching me that particular “verb” in its arbitrary puzzle vocabulary.

If only they put an impassible wall of thorns in front of you at one point and forced you to press a button that activated the magnets, showing that the magnet moves the balls, which in turn burn thorns. And also had a journal entry entitled “Magnets” pop up on the screen. Followed by a voice over from the old Jedi guy explaining how do they work. Followed by me rexplaining it in chat because I could tell you weren’t paying attention.

…a journal entry entitled “Magnets” pop up on the screen.

The problem for me wasn’ t knowing that thorns get burned. That’s pretty obvious, and you can’t even get to the waterfall candles without knowing that. I even knew exactly what chain (i.e. rope) I needed to burn to drop the ball. The problem was I didn’t connect the blue rays that push the block (i.e. crate) you can climb onto with the blue rays that spit out the fire acorns. That was the final bit of the puzzle that didn’t click for me. I’d moved the crate into place and figured I was done with that bit. BD-1, as usual, was no help.

Two clips to further support the discussion, thanks to Jason:

and a moment of that Starwars game that, I thought, looked amazing.

Twitch is the world's leading video platform and community for gamers.

And here is the ending, stripped of the four hours and thirty useless minutes, down to the essential part: