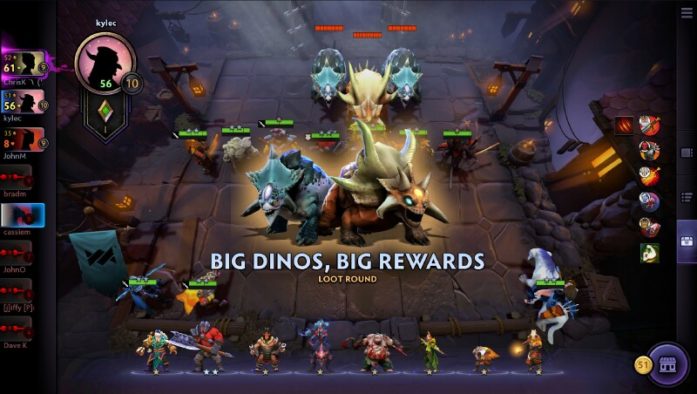 It’s all I play, what do you expect of me?

Auto Chess has joined Battle Royale in the category of “hot new genres I just don’t get and make me feel like an old man”.

It feels like a twitch game where you have to familiarize yourself with every single hero and combo (that the game does a terrible job of conveying easily) to the point that you can recognize and configure them within the 20 seconds between rounds. But then the battles are automated. So it’s a twitch game where you’re not doing anything for 2/3rds of the game…I don’t get it, and pass the Metamucil.

Reminds me of the electric football table games where you set up your team pieces then just pray that your formation vibrates its way to the endzone before the other guy. Same feeling I got from Gratuitous Space Battles, but at least there you got plenty of time to set up your stuff.

I suspect the lack of interaction is a feature not a bug. It gives off a feeling of some betting games where you just watch your side winning (or losing), and the players having a thrill with maybe an unexpected twist on the battle or whatever.

That could be talking about Auto Chess OR Electric Football!

And the proper elevator pitch for Thea is “Heroes of Might & Magic meets X-COM base building: the card game”.

You move around a HoMM map, with armies made up of individual people instead of unit stacks. You pick up resources around the map, hit encounters, order your dudes to hunt, mine, or craft around the map. You found a city and develop it using the resources you get. Develop it for special stuff, crafting better equipment for your dudes, buildings that give special bonuses or unlocking new character classes. You’ll periodically get new dudes in the settlement.

Combat is driven by a strange card game. Each character plays a card every round. You get more and better cards depending on your stats. Sometimes instead of combat, you’ll get a challenge encounter. Those will be something like “stealth” with a similar card game played out where winning the “battle” means you snuck around the obstacle. The cards you get for that will be different than combat and will draw on a specific set of attributes (hunting, pathfinding, “stealthy” stuff). The problem with that is while the game is very clear on how it gets the numbers for combat, you’re almost completely at a loss on what determines the special encounters and you won’t know how good your cards will be before going into one (it gives you options every encounter on what type it will be, but not exactly what they mean).

Ultimately, the game is about averting the apocalypse. It starts off hundreds of years after an apocalypse devastated the land and cut off all gods, leaving humans near extinct. Humans have just started getting organized again with ancient magical forces finally waking up again. You find that some disaster is pending and you have to avert it before a certain number of turns. You don’t know exactly what it is and you find out by exploring the map and doing quests. There are multiple victory conditions like “follow the quests to a final boss”, or “perform rituals to reawaken your god”. At the beginning, you pick a god and tribe that give certain bonuses with different approaches, unlocking more starting choices as you progress.

It’s all I play

It’s practically the only “new” kind of game that gets put out on PC these days.

Well your last comeback point made me very interested in those mods… but argh, so little time.

I am still confused with all those names, what is the iOS one?

Auto Chess: Origin ? That’s being made by the people who made the original mod.

Sadly, the time commitment to actually learn these games is just too much for me. And a single game lasting 30-45 minutes doesn’t help either.

Auto Chess: Origin ? That’s being made by the people who made the original mod.

Sadly, the time commitment to actually learn these games is just too much for me. And a single game lasting 30-45 minutes doesn’t help either.

That, combined with very VERY dodgy feedback as to why you’re winning or losing.

And this is coming from someone who’s logged 1300 hours into DotA 2 and 2000 into League of Legends. God help anyone going into this blind.

from what i gather on Thea 2, you are NOT penalized or motivated/forced to get out of town…you can click end turn button 500 times to make that great weapon/armor and ‘the game’ doesn’t care

tell me if I have bad info

I’ve only played the first one, but there generally is a time limit. Tougher monsters start spawning, monster lairs get established nearby, and I think you just outright lose with the world ending by a certain turn.

Unless you’re insanely lucky, you won’t have all the resources you need to make stuff nearby the town. You have to set up mining/gathering camps at the spots the resources are, which means clearing out monsters.

Although the original had the unfortunate balance issue of ancient wood being by far the best crafting tech branch to the point you didn’t bother with anything else. It was the easiest top tier to research, easiest top resource to find, and provided by far the best equipment. Mythril took a TON more research, was harder to find, and then for all that trouble the equipment ended up being worse than ancient wood.

Autochess is a deck building game, like Dominion or Ascension, but every card is complex and it’s really difficult to say if something is an improvement or not.

What kind of game is “Lords of McMaster?”

A very different game than “Loads of McMaster”

I’m curious Tom, how far along did you get into DUSK? The first episode does a good job of capturing that 90:s shooter feel, particularly Blood’s b-movie horror aesthetics, but the second episode is where the level design really hits its stride, and when you hit the Escher Labs level, reality starts breaking in really entertaining ways.

I’m curious Tom, how far along did you get into DUSK?

Just the first episode. I’m glad to hear the level design gets better, although I didn’t really mind the level design in the first episode. It was kind of cool exploring around and under that church and barn and whatever maze that was supposed to be. But I think my main obstacle to play Dusk is that I’m spoiled by the overall look and feel of Amid Evil. Still, I’ll reinstall Dusk and have a look a bit further, even if just to compare it better to Amid Evil and Strafe.