Man, I used to make models–mostly tanks–and would love to do so again. No time, no space, no money for it though, and really, I was never in the class you guys are in. My best stuff was merely “good” I think, but I enjoyed doing it.

I will post some of the Hordes I have finished. First up, my Tharn Ravagers

Okay, try this again, will post some of my Hordes figures. Let’s start with the Tharn: 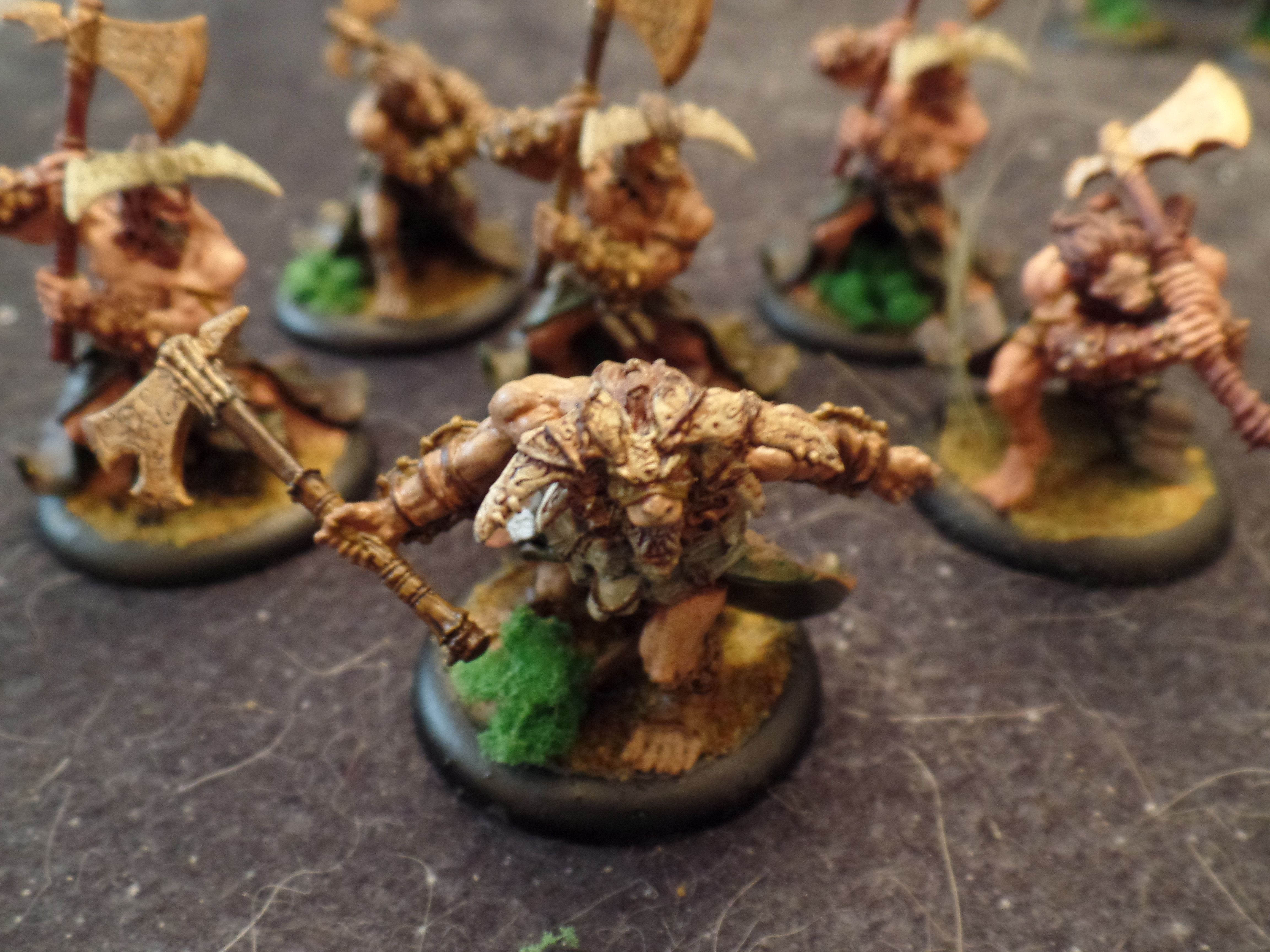 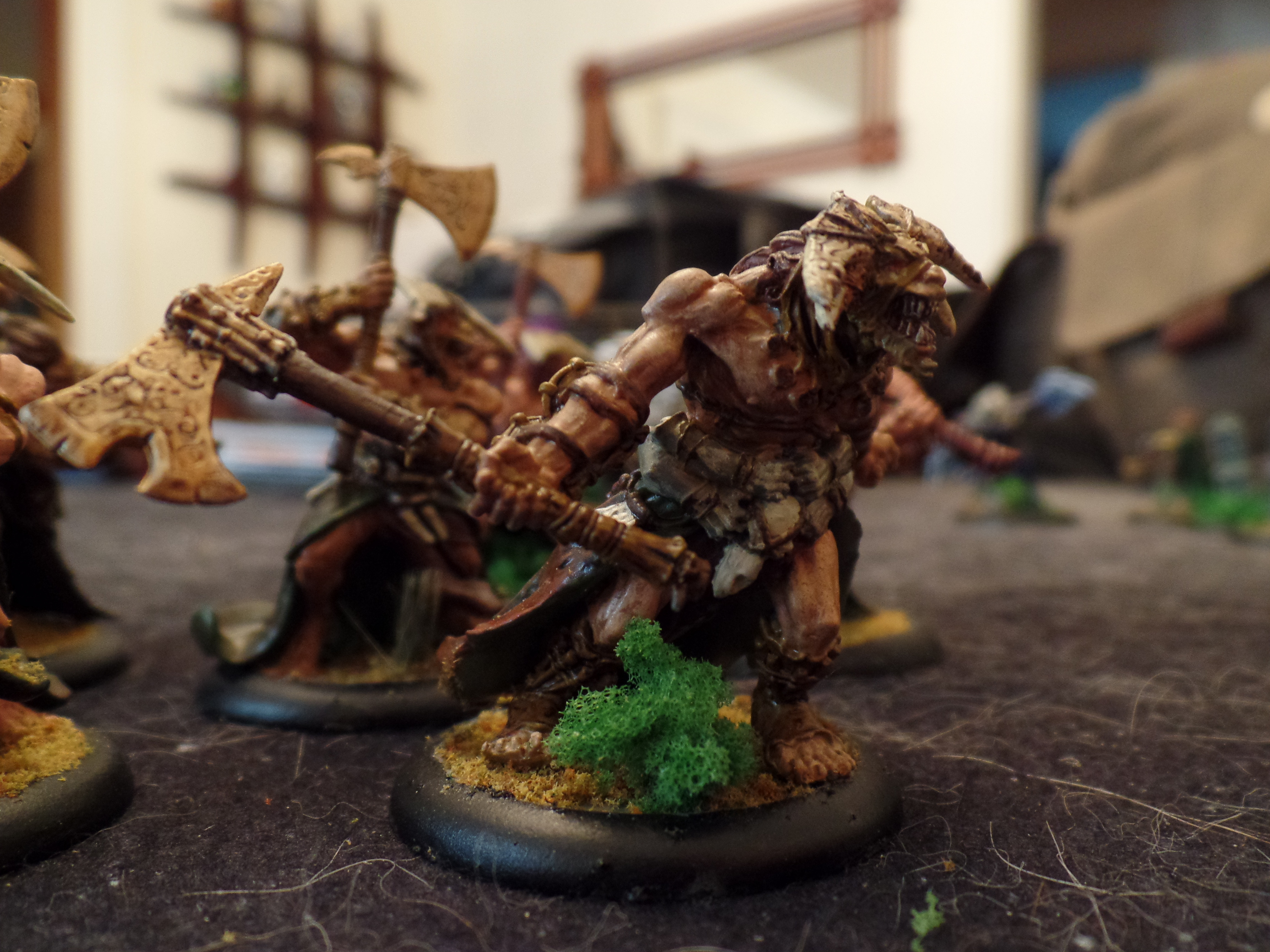 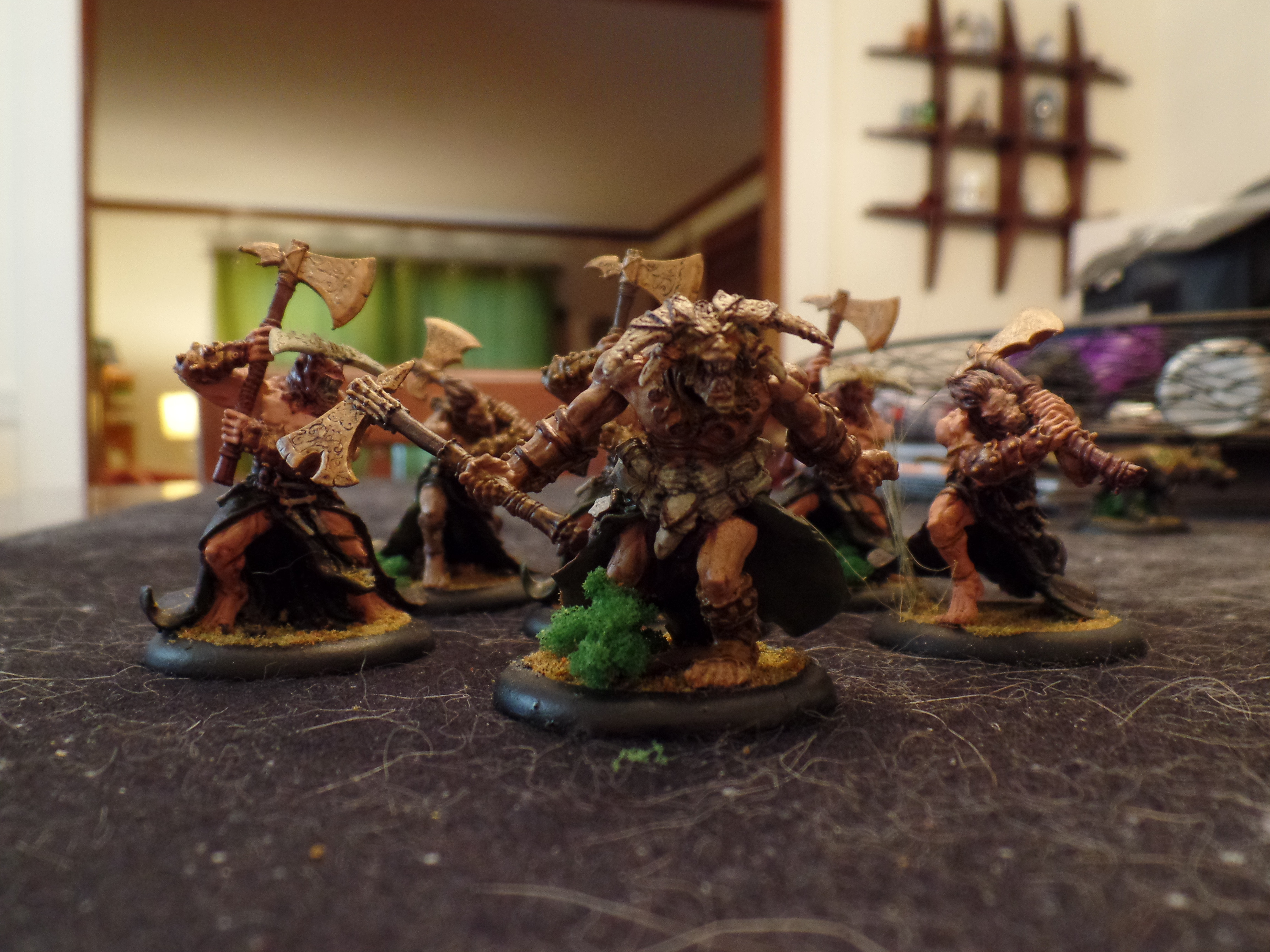 What are your tips for weathering?

I just use pastel chalk sticks, grind them up on sandpaper, and brush the powder on…sparingly. For mud, just mix up some baking soda in a little bit of paint, it’s pretty slick.

I’m about 90% done with my first painted miniature, a Cygnar Defender warjack. Still have a bit of highlights to do, along with basing the model. Still haven’t decided how to base it. Any suggestions? Also, any general painting tips would be helpful.

P.S. The blue splotches in the first pictures are wet paint that hasn’t dried.

Geez. You guys do all of that white-edge-highlighting stuff that makes the units look so good in the official photos GW uses. I tried that when I was into collecting + painting Airfix and Warhammer and I sucked at it. Granted, I was 13, and so I sucked at paining minis in general, but I really messed up the highlighting/darklighting stuff :P

If it wasn’t for the backdrop I’d say this image came from the GW website.

I have mad envy for people that can do this type of work. Miniature figures, model work, all of it. When I go to the gaming shop nearby, I gaze in awe at the display shelves filled with painted minis.

Like Telefrog, I’m always draw to the window displays, but then I force myself to hurry along once I’ve seen a price tag.

So if I wanted to getting into painting minis now, and didn’t want to pay a billion pounds for a small lump of factory produced plastic, which “line” or manufacturer should I look into? Is such a thing even possible? Shellfishguy/Juan are talking about snap together models. Are they cheaper than GW ones? (Though, frankly, I’m not that interested in painting a Japanese robot.)

So if I wanted to getting into painting minis now, and didn’t want to pay a billion pounds for a small lump of factory produced plastic, which “line” or manufacturer should I look into? Is such a thing even possible? Shellfishguy/Juan are talking about snap together models. Are they cheaper than GW ones? (Though, frankly, I’m not that interested in painting a Japanese robot.)

Snap together gundam models are indeed cheaper than equal size GW minis (specially forge world minis, fuck those prices), but they are much larger than normal minis. So you will spend much more for a msall robot than for a small mini. The images I showed where of a 18cm tall robot. There are 1/144 scale models (around 12cm high) that are very cheap (around $20).

However:
-The snap together models are indeed dominated by anime and videogame robots. This is due to the extreme expense of the engineering, so few companies can compete and all of them are Japanese. Non-snap together models have more thematic variety, but they don’t have the cool articulation and amazing engineering the snap together, mass produced models have. I particulary like the Maschinen Krieger line (japanese manufacturing, but western aesthetics). Thisis a cool model, for example. Bandai’s new Star Wars ships are also very nice.
-These models, because of their size, are not as easy to paint as regular minis. Basically, unless the model is crazy detailes, when you start to go above surfaces of about 1cm, painting by hand and keeping a great finish becomes very difficult (at least it is for me). I paint with airbrush, but I had an airbrush and compressor from my BFA days stored, and thus I didn’t have to go through the expense. Otherwise, you are looking for $100 for an entry level kit that might fail in a year or so.
-It takes shiloads of time to paint a snap together model. for the 1/100 scale I showed, you are looking at about 200-400 pieces in the simpler models. Since I can paint about 40 pieces at a time with an airbrush, and it takes me around 4 sessions to finish a piece (and that’s rushing), I spend at least 40 painting session to paint one of these guys, and that’s not counting decaling and assembling. On average, I’m takin 3-4 months per model, which is great for me since I spend less per model and thus can afford cooler stuff (keeping my $/month ratio the same). But it requires a certain sort of patience, and a certain sort of wife.

I’m actually looking at character resin kits or GW style models (if only Forgeworld stuff was less expensive…) for shorter term projects to do in between robots.

If you are just starting I would certainly recommend minis.

Here are some shots of my Warpwolf 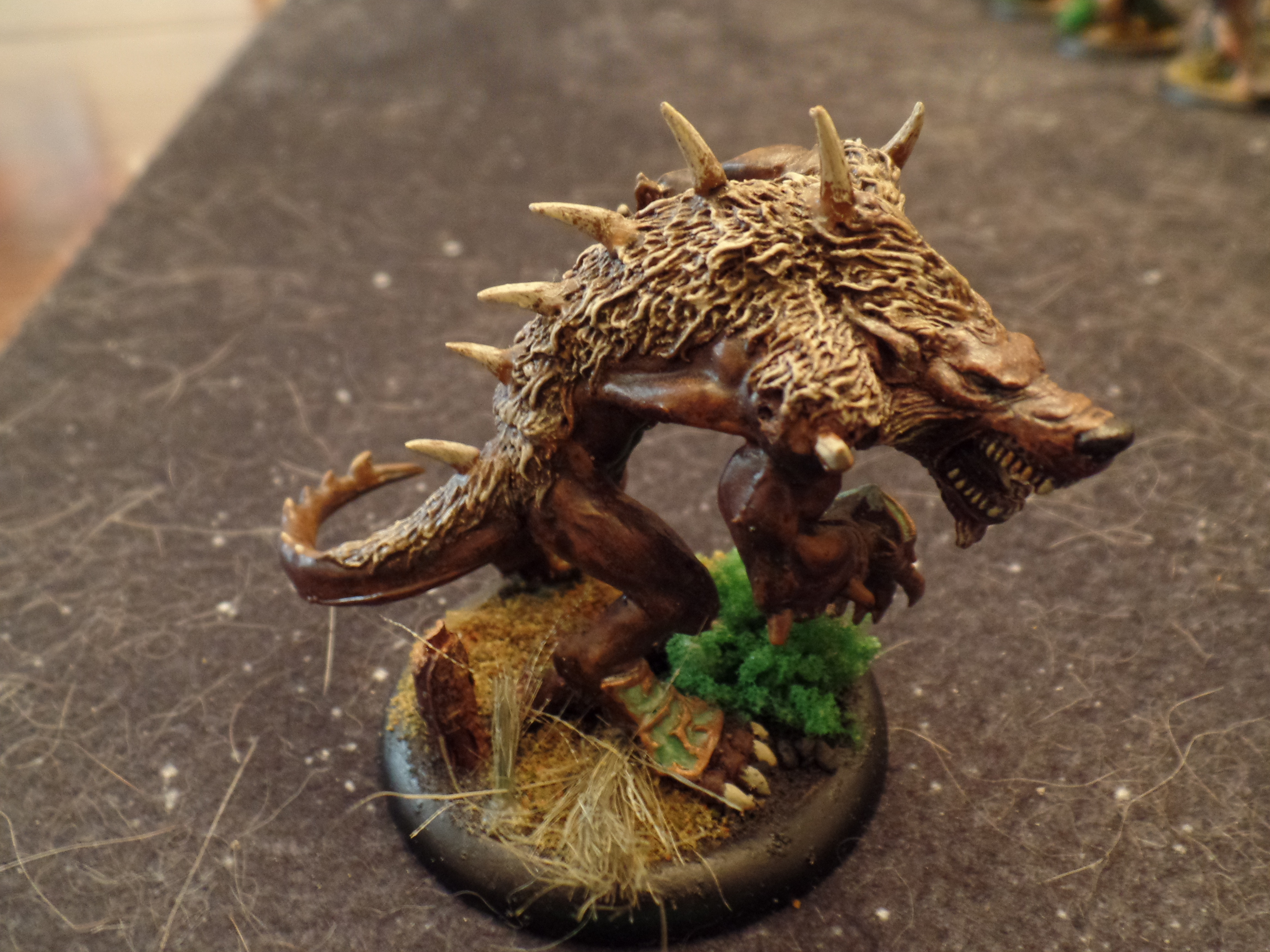 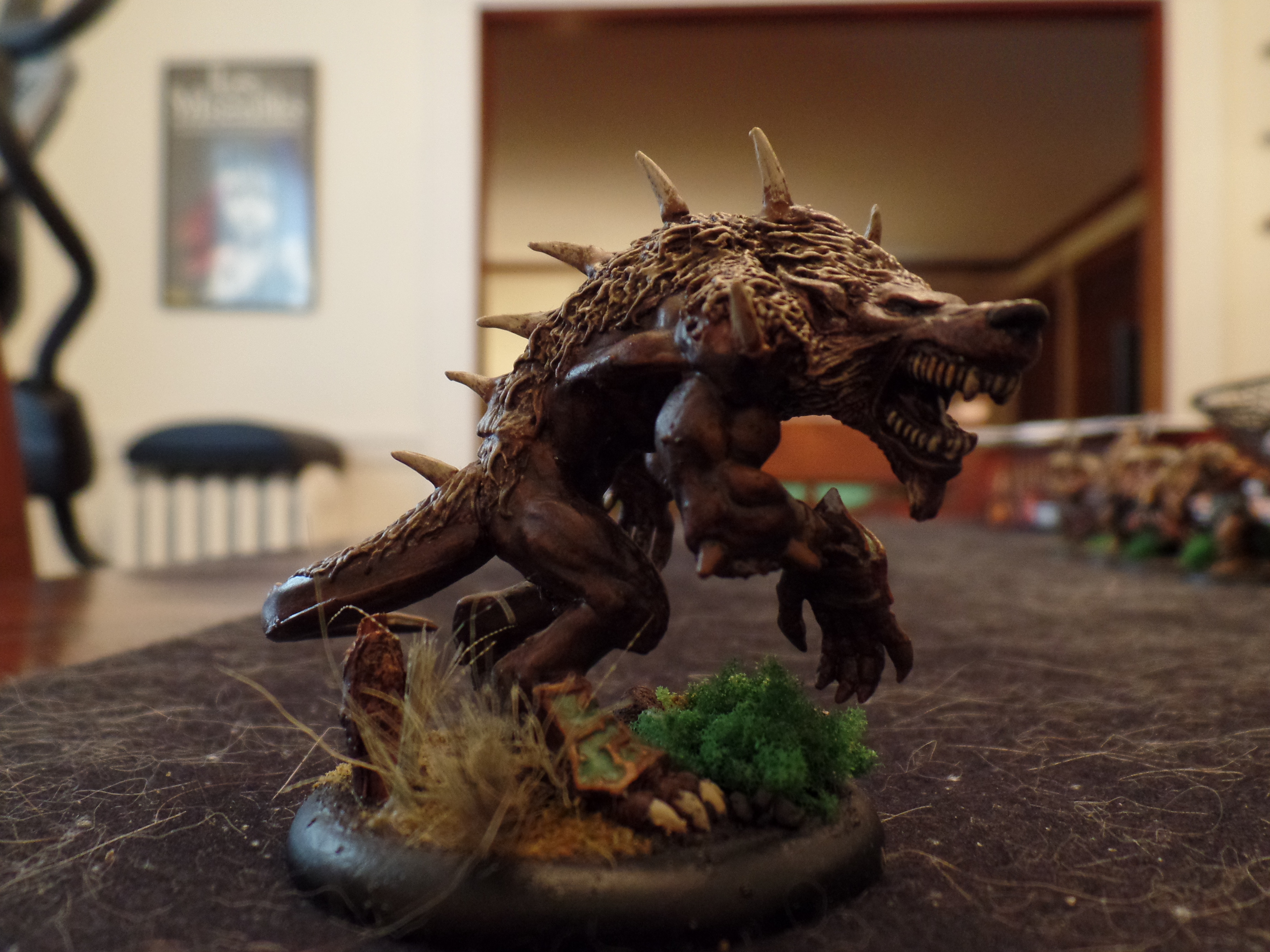 More than anything else, I’d love to know what camera(s) you guys are using. I’ve had very little luck shooting my painted minis – even the macro lens on my DSLR doesn’t appear to help.

I put paint on a model.

Nice work, Meeper! Are those from 40k or Infinity?

Wow, great work in here - now that we’ve moved, my wife & I need to paint about 500 different miniatures from all the Kickstarters & board games I was sucked into the past few years. Will post a couple of Lords of Waterdeep avatars that we painted when I find them.

Nice work, Meeper! Are those from 40k or Infinity?

The first is a Phalanx from Robotech RPG Tactics (the plastic is ABS and is a complete bitch to remove/patch seam lines from). The second is a soldier dude from WH 40k (I don’t play it, so I don’t track names and such).

I’m still looking for a fine enough brush (that keeps its tip) to be able to do really fine detail like the nails on this ghoul from Ravenloft.

Galadin, I love those Circle models. And the bases are outstanding, I love them. I think you told me a while ago that your warmachine models were packed away, so I’m glad to see they have emerged unscathed.

So I finished my first Warmachine model today. I also made my first major painting mistake. After I had finished with the highlights, I decided to spray on a coat of glaze. I chose matte glaze, since I didnt my model too shiny. However, after the glaze, I discovered that a lot of my more subtle highlights had practically disappeared, and the matte finish made my model look dusty :-(

Oh well, I guess I’m going to have either switch to a glossy glaze and make my highlights more pronounced, or just not use a glaze at all.

What did you use? In my (limited) experience matte coats can look dusty if sprayed from too far away (it dries before hitting the model)

I use Testors Dullcote for my glaze coats, and it gives the models a soft flat look that I like. You do loose a bit of contrast though so it’s good to account for that. Generally higher contrast models pop a lot more on the table anyway.

What did you use? In my (limited) experience matte coats can look dusty if sprayed from too far away (it dries before hitting the model)

Yeah, I wouldn’t be surprised if this is what happened. I used a Japanese brand, forget its name. I may end up stripping the paint at some point and re-painting it, but I probably wait until most of the rest of my army is already painted. I may experiment with glazes more in the future, especially since I love how it can blend layers, but I think I’ll pass on them for now.

Galadin, I love those Circle models. And the bases are outstanding, I love them. I think you told me a while ago that your warmachine models were packed away, so I’m glad to see they have emerged unscathed.

Yeah, haven’t pulled out the protectorate yet, and don’t have as many of those done. Have a lot of primed models as well to go, but now that we have an AC up in the attic (which is our cat free room) I should be able to get back into painting. Then maybe pick up the new books and actually play a game might come next?

The lightbox finally arrived. It’s cool to be able to take nice photos of the models, but I think I might need a better camera further down the line…

Anyways, this is the second model I did. 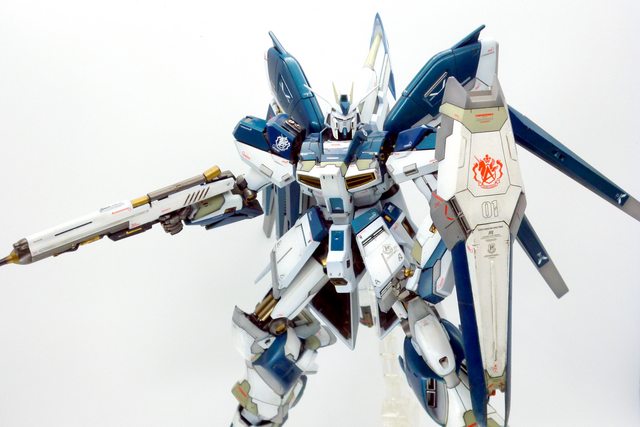 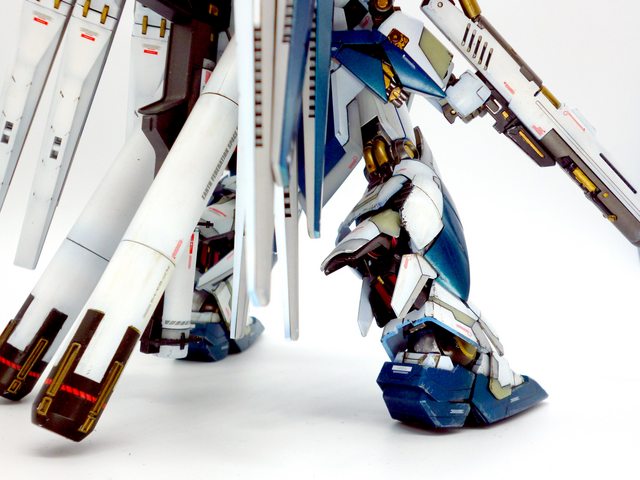 I’m currently working on the third, still at least a month away from completion…