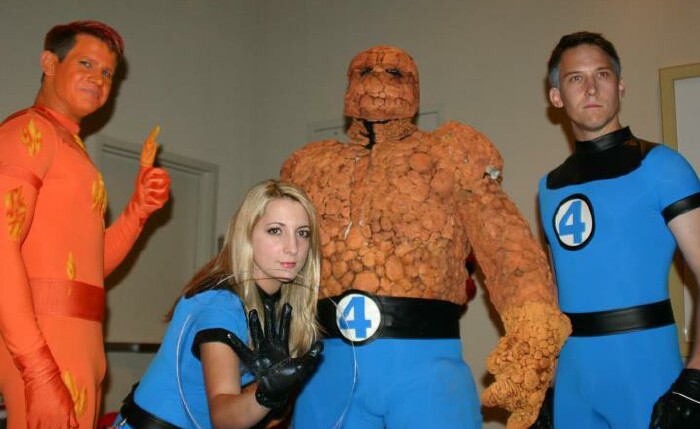 Is Fantastic Four worthy of its bad press, bad box office, and bad reviews? At the 1:15 mark, we type into a browser the URLs of our favorite fake websites in movies. Next week: Man from U.N.C.L.E..

Tom I think your under is titled Afflicted. Which you just said on the podcast. Dammit.

I always multiply the aggregate by 10 and then divide by 9. If the final number is 10, your movie sucks.

I use exponents and divide by Kelly. If the final number is pi, your movie rocks.

The first act had promise but none of the potential story hooks get paid off.

Other than one or two comments and a couple of quick montage scenes there is barely a relationship between Victor and Reed. I would have liked to have seen this developed more if for no other reason that to help flesh out Victor's character.

Victor likes Sue, Reed likes Sue, Sue doesn't seem to care. Other than the one scene of Victor telling Reed he's being unprofessional when he sees him celebrating with Sue, nothing happens with this.

Johnny and Sue are siblings but there is doesn't appear to be any love or hate between the two of them. I realize that in real life siblings can be indifferent to one another but in a movie that is not interesting.

Dingus, you mention the whole lack of containment with the monkey and I couldn't agree with you more. Nobody seems to realize or maybe nobody cares about the potential contamination that might be brought back from the other dimension. Even when Reed, Johnny and Ben return radically altered along with Sue who was only exposed while still on Earth, the extent of the containment is a locked room and hazmat suits. For gods sake, they aren't even using separate air systems to filter out any potential diseases or what have you.

Does planet zero have an oxygen atmosphere? I seemed to recall that they needed to have suits on to survive. This gets forgotten in the third act unless in addition to changing the landscape Victor also created oxygen on the planet although why he would need to is beyond me.

In the forums Justin D Herd wrote " I was really surprised when Doom came in and they went for, what I would consider, a Hard R in his slaughtering the facility." I was surprised as well and I actually liked the scene. The only problem with that is that it's another case of a villain wiping out people using his powers which he/she suddenly forgets about once he/she faces off against the good guys/gals.

Where did Doom find the material for a hood on planet zero?

Was it me or was everyone seemingly underwhelmed with the creation of a working teleporter?

My favorite line in this post is, "Sue doesn't seem to care." That is so great. There is just no passion in any of these roles. I don't really get a sense that Victor wants her, just that he thinks he is supposed to. Same with Reed. And she couldn't care less about either one of them. It's like, "You boys dither about with your crushes on me. I have science to do. Text me when it's over."

Also. Yes on the wonder of the teleporter! HELLO! HE MADE A TELEPORTER!

Are we looking at the same picture? I see a group of Fantastic Four fans in some pretty good costumes (although the Human Torch could use a bit of work).

I haven't finished the podcast yet, but Christien still wins the three-by-three for his Ex Machina pick. Bluebook is the reason I locked down my Google history and privacy settings.

The Human Torch is freaking me out, Mercanis. And I don't understand why Sue Storm looks like she's in the middle of a diamond heist and forgot to drop the part of the window she cut out. Also, I'm disappointed that Generic 4 Man didn't find a way to make his arms look plastic.The others all are taking a chance and looking silly. Why does he get to stand there looking dashing with a little grey on the sides?

You're right, though. They are in some pretty good costumes.

But still, the Human Torch is freaking me out, Mercanis!

Until I took that contemporary history course, I never knew there were so many Buddhist monks in the 60s who were also Human Torch cosplayers.

This week I re-watched M:I (i.e. the first one) in prep for Mission Impossible: Rebecca Ferguson Edition. The interaction the Cruiser has with his laptop to access the internet was enough to make me snort coffee through my nose. On the search web page he is prompted for a "searching string" and, upon entering "Job" (for the Book of Job), he is presented with "0 results found". Sheer lunacy.

Workplace quotas were way smaller back in Biblical times.

Curse the internet and die.

*chortle* Good reference to the best line in the entire Bible.

“During takes, [Trask] would be telling [cast members] when to blink and when to breathe,” one person says. “He kept pushing them to make the performance as flat as possible.”

so, I guess that was the idea?

"Cut! Heartbeat was in the shot again. Morons!"

I, and the rest of my Skiffy and Fanty podcast crew, did a podcast on the Roger Corman Fantastic Four back in February:

FYI, guys, Tom is right: Interstate 60 is NOT a good movie. But I would laugh myself to death if Kelly ever did an opsis on it.