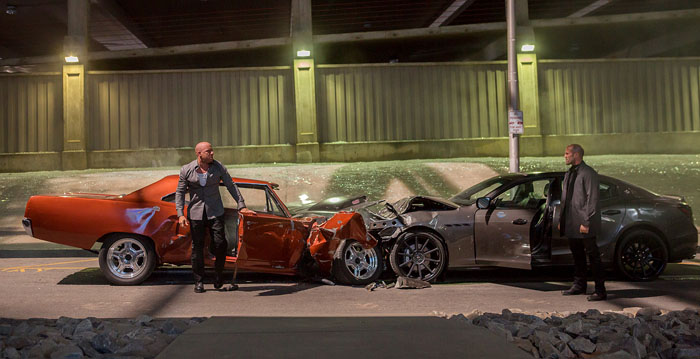 We were among the audience members in the ninth biggest opening weekend of all time and we're here to tell you about it. At 1:23, we're drawn into a discussion of magnets in movies for this week's 3x3..

For anyone interested in the Paul Walker 3x3, check out The Hobbit: The Desolation of Smaug podcast.

Who and who made a short movie many years ago? Who was the love interest?

It was called iBomb. TRUE STORY!

Did the bomb get disarmed?

It depends upon how you feel about the difference between subtlety and ambiguity.

I think I enjoyed the love can bring someone back from the dead scene in The Matrix over the one in Furious 7.

My favorite is from The Abyss. Because what Ed Harris is doing contains love and mayhem, with language throughout.

I'm a little ashamed to admit that I've never seen The Abyss. Is it worth a viewing? Just borrowed the first 6 F&F from a friend so I've got a lot of movie watching to do.

Oh I definitely think it's worth viewing. I love the sense of place, especially, to say nothing of seeing the origin of some groundbreaking special effects that James Cameron pioneered through this movie.

It falls apart, but there is plenty in The Abyss to recommend it. Plus...Chris Elliot.

How can a documentary "fall apart?" Do you mean from a physics standpoint?

According to the International Documentary Association, any documentary not directed by Errol Morris is predestined to fall apart. Union rules. What are ya gonna do?

This movie was a great time. The action set pieces in these films are an endless game of ridiculous One-upmanship. The characters have to struggle mightily to act as if any old crazy thing they do might possibly be dangerous. None of it makes any sense nor has any stakes. All this is why I love it. It's sheer gratuitous action spectacle, but with heart. The opening Statham scene set the makes-no-sense-so-fuck-off-and-enjoy-it tone and the rest of the flick maintained.

I loved that Paul Walker's arc unraveled the way it did. The entire movie had me waiting for his quick demise, and they just refused to let that happen.

As per our morning housework routine I ask my five year old son Constantine what talking (podcast in our parlance) we should listen to? He answers that he wants to listen to Kelly Wand. Just wanted to let you know that your magic bridges generations Kelly.

Probably helps that I peaked at five.

For God's sakes Kelly, even The Rock speaks of a latency period.

There is also the fact that the iron all gets pulled forward out of his body. If all Magneto is using is magnetism to hold the guard in the air, wouldn't that just have pulled the guard forward? (Still, I do love that scene....)