Jessica Rothe gets her own horror/comedy franchise. It couldn’t have happened to a nicer La La Land roommate!

Is this one to go into spoiler free? I enjoyed the first one, though it wasn’t anything special. So if it’s no better than that I wouldn’t mind spoilers too much.But if it takes it in unexpected directions, I might hold off on the podcast.

(Posted in the wrong thread initially)
Tom was right on me being a Richard Kelly completionist: 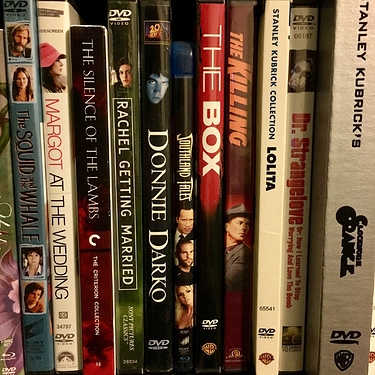 What can I say? Give the man some more movie making bucks!

Dingus is really good as the husband in The Box.

I definitely didn’t expect where it went. And yes, that’s an endorsement.

Dingus is really good as the husband in The Box.

I watched The Box for a little while after it arrived. Then I opened it. It turned out to be a board game gift from @Chappers for our place! It’s called Azul. We’re going to roll it out tonight.

There was no husband in it. So who knows what Kellywand is talking about.

“What dimension am I in?”

One day. One day I’ll get that Universal Sopsis: Day of Reckopsis.

One day. One day I’ll get that Universal Sopsis: Day of Reckopsis.

I was pulling for you, Soren. It’s not only a movie I haven’t seen, but I was looking forward to the opsis of a movie I’ve never seen because of you.

Let’s just say the opsis has potential, because like Why Did I get Married Too, it makes some…unconventional narrative choices.

Unlike WDIGM2 though, I’d be willing to defend it as good. Good-ish. Good adjacent. And definitely way more interesting than the sixth entry in a Roland Emmerich-spawned franchise could be expected to be.

(I suspect it’s a Not for Dingus movie though, particularly because of the way it opens.)

I read these comments before I listened to the podcast and got real hyped for a The Boxpsis. Then I took my crestfallen self to the archive, 'cause an '09 release meant there was a chance it already exists. Never thought The Men Who Stare At Goats would ruin my day a second time.

I quasi-double-featured these as well, and I agree that the second one is inferior. Too much schmaltz, silly technobabble/multiverse stuff without payoff, forced morality “issues” (which are thrown in the garbage at the end where they decide to trap Danielle in a time loop just cause?).

Buuuut I think the (boring and wrong) killer reveal was a bit self-aware in its Scooby-Doo-ness. And while the poofed-up hair joke breaks the rules a bit, we also get the nice character moment that is “I hate that you two are making out so much, I will splatter my corpse in front of you to ruin it”. Relatable!

I…still would watch the third one, if/when it comes out, if only to see Jessica Rothe have fun with it. Hopefully.

Somewhere about 45 minutes you, guys, discussed how Christopher Landon - the director of both movies - couldn’t write a script to save his life, so he should keep shooting someone else’s material. Kelly Wand even asked why they didn’t hire the writer of the first movie.

According to interviews with Landon he basically wrote the first movie. There were two initial drafts by Scott Lobdell and then Landon did 10 drafts more for another director and then for himself. But he couldn’t prove that his input was essential enough, because It’s way harder to do when you’re taking the director’s chair.
You should write ~50% of material to get credited as opposed to ~30% for a writer. The rule is stricter, because a director could change a lot during rewriting, shooting and editing processes, therefore Writers Guild does everything to protect writers, especially authors of the first draft or initial concept.

So there was WGA arbitration, Landon couldn’t prove it, that’s why Scott Lobdell get the sole credit, despite Landon rewrote almost every line of dialogue, every death scene, added birthday, love interest, etc. My point is the first movie was great and well written because of him, not in spite of him like you came to believe. And unfortunately sometimes it’s not enough to glance at a movie credits to get the idea who wrote what.

By the way, I loved the second movie, although it’s a huge mess compared to the first one. Jessica Rothe’s commitment was indeed admirable in both movies. Would love to see the sequel.

Thanks for the update, Mr. Wou! It’s always fascinating to read what’s going on behind the scenes when it’s so different from what you’d infer based on what you see onscreen. However, it’s also important to keep in mind who’s telling the story. Of course a Christopher Landon interview is going to present the case that he’s primarily responsible for the good stuff! I suspect Scott Lobdell would have a different version of events.

You should check out Jessica Rothe in a little movie called La La Land.

However, it’s also important to keep in mind who’s telling the story.

Sure, but I’ve heard enough similar stories, so I kinda believe him. Besides, any movie is written three times: during script writing, during shooting and during editing. So IMO Landon’s input was important, just not in the eyes of WGA rules, which is understandable.

Also, finished the podcast, liked your discussion a lot, btw, opsis was fantastic, I just think that you should be a little bit more forgiving to Blumhouse productions, cause they’re incredibly cheap in terms of budgets.