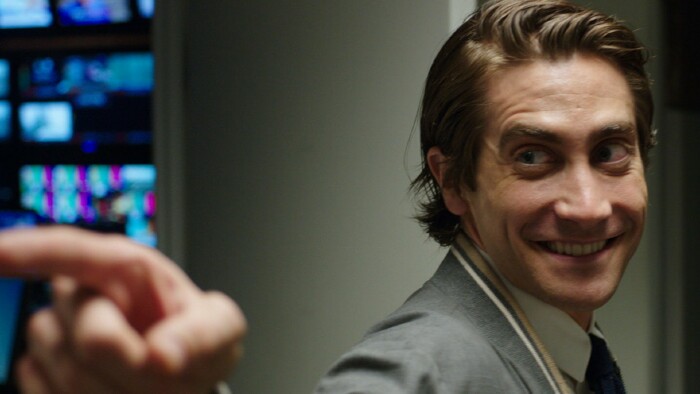 This week we don't see a movie about an X-Man or the Prince of Persia. We instead see a handful of Gilroy brothers making great use of Jake Gyllenhaal..

Hey guys! I downloaded the podcast manually via the link, but that's because it doesn't seem to be showing up in the podcast feed. You'll notice, even the movie podcast page on this site still lists John Wick as the most recent podcast. Perhaps it was posted to the wrong place?

I'll check on that ASAP, Josh. I appreciate you letting us know.

I have to work, but a quick knee-jerk response to the early moments of the podcast... Christien, I loved your remarks about the movie creating another world where local news actually matters. I was grappling with the same thoughts as I left the theater. I also don't recognize the world where people tune in to local news. I get everything online. Even my local, small town police precinct has a twitter feed. But the movie just ran with it, and I was completely pulled in.

I totally understand the circumstances and good health must come first.

But Kelly, your Desolation of Smaupsis was awesome! Toms reaction to finding out that everyone will be speaking in Mayan accent was extremely cute.

The Smaupsis had Flim Flamabore the King & Queen of the barrow elves. You spoke in giant arachnidese, Flim Flamabore's reaction to Evangeline Lilly's affections for Legolas and the non-cg smashed head Keanu one are excellent.

And finally, a simple quote "Kili rest your injured head on this bed of walnuts." How can you get better than that?

Oops, that was my bad. I think it should be fixed now.

Dingus has never seen the original Halloween? Where can we pay to remedy this? It barely has any blood and gore at all.

I was just about to post a WHERE MOVIE PODCAST.

That last one might've just been me talking to myself.

This weeks Mini Pini Movie Clubapalooza discussion starts at the 1:23:30 mark. Listen to Kelly Wand gush about his choice.

Thanks again, Chris. Should we start a separate thread about this on the forums?

Yeah, I think so.

Thank you sir. I appreciate you doing that.

I've been stupid and I should have been putting that the movies were a movie club selection in the thread title. I'll do that from now on.

Cool. Or we can make a catch-all thread. Although that's probably not necessary. We used to have a Qt3 Movie Club we did monthly. I really miss that.

Well I like that idea, which is probably what you meant in the first place. I'll create that tonight with an explanation of what it is all about, the list of picks so far and times in the podcast that you can find the discussions at.

I've been meaning to do it myself. I just keep not getting around to it. If you have the time, that would be really cool. If not, I'll jump on it later.

I have to admit I'm kind of overwhelmed (by which I mean grateful) with all the stuff you've done on the forums for the podcast. I think you know that. So I feel like a heel for even making the suggestion. I just think it's cooler that your name is on the thread rather than mine.

Nevertheless, I'll be happy to do it if you've got other work/family stuff.

Although I too can't picture any world where the local news is still relevant (but then, I can't picture a world in which reality television is relevant, and yet people keep watching those shows), I don't think Nightcrawler portrays it as a particularly thriving industry. Most of the sales we hear discussed are for a few hundred dollars - a figure which presumably climbs to some degree during the montage sequence given Gyllenhaal's car, but it's notable that that's the only luxury he appears to afford himself and he's still paying Rick a pittance. The station Gyllenhaal is selling to has painfully low ratings, hence his leverage over Russo's job. Even when he brings the big ticket item, the price they eventually settle on cleans out their budget for...a month, I think?