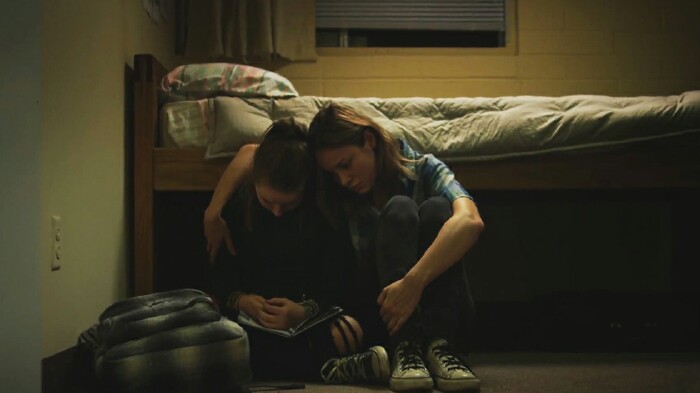 We finally get around to seeing Short Term 12, which we unfortunately missed last year. If you haven't seen it, you can skip to our 3x3 of movies referenced in other movies that we didn't like. The references, not necessarily the movies..

I totally forgot some of these awful references (like the Maverick one).

I actually didn't mind Lawrence of Arabia, so I thought about and rejected it in a list of references I hated.

And I loved The Freshman. I wonder if the movie works anywhere near as well without seeing The Godfather, first, though. I don't think you can see the movie "blind".

I think you're right, Paul. I think Clark's prior knowledge of The Godfather is what makes the con work at all. As far as the audience is concerned, though, many of the jokes don't work if you haven't seen it. Jokes in the lines, in the lighting, in the music. All of those depend upon some sort of working knowledge of The Godfather. However, just as Psycho's shower scene freaked me out as a kid when I would shower alone at home, even though I'd never seen the movie, a lot of those Godfather references are in the general moviegoer consciousness. So I may have just talked myself out of agreeing with you. Hmph.

At any rate, I love The Freshman.

Hey, we watched a ton of movies last year! Give us a break!

Oh I know.
All the breaks you want.
I was just teasing.

Listening to the 3x3 I realise I misunderstood what the rules were. Oh well.

Also I do enjoy LAST ACTION HERO (and *love* DEMOLITION MAN) but that HAMLET version will not be denied!

God, this movie was so good. I don't think anyone is still paying attention to these comments, but in case someone is, I just want to say that I don't think that the movie expresses any particular sentiment that the line staff are better equipped to diagnose stuff that's going on with the kids than therapists or counselors or the like. We do see Grace feeling that she knows better than those other folks on certain issues, but that's her perspective based on her limited context. It's a feeling I've certainly had at work in my job about things that aren't actually my purview, but I have to remind myself, as Grace's supervisor does her, that I do not have all the facts or training that those people do.

She is right about Jayden's situation, but I think the point there is not that she has special insight into things because she is working with Jayden as line staff, but because she identifies with Jayden, and has a significant amount of life experience in common with her, including, as we discover, similar issues with her dad. I think it's pretty explicit that Grace is seeing her own past trauma projected onto the signs that Jayden presents and making an accurate diagnosis on that basis. It also would appear that neither Mason nor Grace's supervisor are aware of that past trauma, or at least its details, and Grace isn't about to bring it up to lend credence to her argument. (I think that that second "whatever" is pretty significant also - Jayden's just begun to smile and be appreciative about Grace's gifts and then the subject of her father comes up and she just shuts down.) She may or may not be correct in her assessment of Sammy's readiness to lose the dolls, I don't think the movie gives us enough information to say. And certainly she doesn't have any special insight into what's going on with Marcus, or certain events there would probably not have happened.

Oh, and you would know Nate from The Master. Haven't seen it, but according to the Filmspotting review, which I listened to after this podcast, he was in that.

I love it when folks see a movie we've done in the past and then come here and comment, even so much later.

So, yes...someone is paying attention, Barac.

God, this movie was so good.

Indeed. I just watched it last night. When Grace is at the doctor’s at the beginning, scheduling an abortion, and she says she’s had one already, you don’t know her yet, so you make all kinds of assumptions about her that turn out not to be true.

Also, a lot of movies try to show rather than tell, but it’s rare to see a movie which realizes that some stories are best when told, not shown. This movie does that a LOT. It shows people and their emotions, but most of the stories are told to us, not shown, and the way they are told is enhanced because of that.

I saw the movie pretty late last night, so I haven’t tracked down this podcast yet. I’ll definitely catch it this weekend. Since Christien’s death, I’ve been catching up on podcasts for movies that I’ve seen, and it’s been a lot of fun.