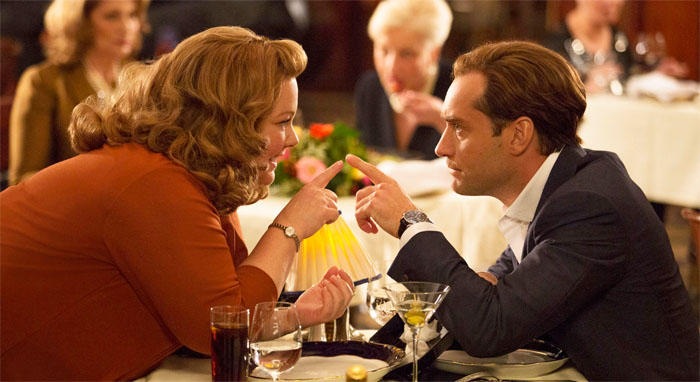 It's a two-to-one split on the Melissa McCarthy spy send-up, Spy. At the 48-minute mark, we carve out some time to talk about our favorite statues in movies for this week's 3x3..

Looking forward to hearing what you guys think of this. This was a long movie and I felt every minute of it... The whole time all I could think was how I wanted to be watching Kingsman again instead. The whole thing seemed to be a fever dream with too many characters, a female lead who the movie is mostly about laughing AT, rather than with (I don't remember one joke she made that was funny other than a self-deprecating remark, all the good humor was making fun of her), and Jude Law needed to be replaced (as much as I like Jude Law). I don't think Melissa McCarthy ever rises above the dumping on she receives. Every time she pulls off something bad ass she gets undercut again. The movie never lets her have her moment, which makes me wonder why all the reviews say it exalts her and puts her above her image.

There might have been something in this movie, but it is way too tangled and messy with characters flying in and out of the movie. For me Jason Statham was the only good part... and that is a very sad statement.

The two statues at the Gates of Argonath are Anarion and Isildur which guard the northernmost border of Gondor.

You are right about how long the movie felt, knellear. I felt that during it and I think I forgot to bring it up in the podcast. This is strange for me, as over-long comedies are a real pet peeve of mine, and we're seeing that more and more for some reason (well...it usually has to do with a big name director not wanting his stuff to be edited and nobody saying nay, and as this was writer/director, I think it was exacerbated...see Ex Machina for a first time director who goes against this trend). A comedy should be, or at least feel, fast. And I think there was plenty that could have been trimmed from this movie, as much as I liked it. I got impatient a few times during the movie, and that shouldn't happen in a comedy.

I do disagree that the movie never lets her have her moment, though.

I did wind up liking it, since I thought her going from "Blend in, let someone else win" to believing in herself and her abilities basically worked, the performances were pretty uniformly excellent, and that kitchen fight put the choreography of most studio action movies to shame.

A more disciplined filmmaker - preferrably one with more visual flair - could have taken that cast and material from good to great though.

The kitchen fight was uncharacteristically good, wasn't it? Unfortunately, it was yet another example of a fight scene that relied 90% on editing. But at least it had some choreography to it. I particularly liked the "knife to the top of the skull blocked by a skillet hat" maneuver.

Sorry Chris. I'm sure he'll get nice again once he's had second breakfast.

Speaking of second breakfasts, I know it's a silly little thing, but I felt extraordinarily happy for Tom when Kelly and Christien called him out for snacking during the podcast.

FOOD IS SO GOOD!

I for one will be sorely disappointed if we do not get an update on Remo Williams next week.

I agree, Jaime. Actually we should make that a new feature. The Remo Williams Update. I kind of love that idea.

Yes, but will Tom watch 20 minutes per week or will he dodge the responsibility like Remo dodging bullets?

I don't know what that means, since I've never seen it.

I actually hope Tom will watch a couple minutes a week and do an update based on that. Every week! Like that Star Wars podcast where they break down each minute of Star Wars. But with a good movie.

Then he should probably be watching something other than Remo Williams...

Re: Clash of the Titans and your question

Traditionally in the myth, Perseus did NOT use Pegasus to fly around to petrify the Kraken--he just did it from the shore. Bellerophon is the Greek Hero who was known for Pegasus antics. So the movie DID invent that, yeah.