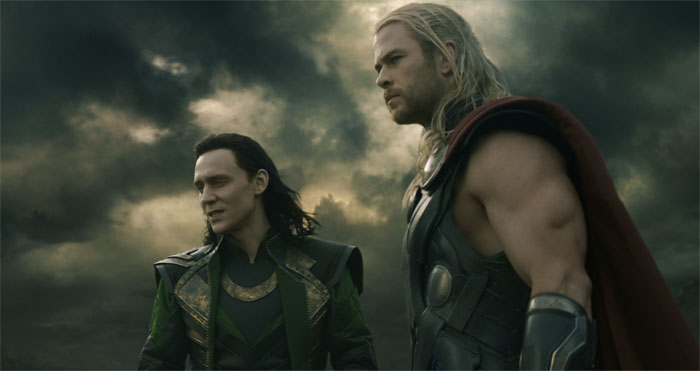 It's a dark world indeed when this podcast can't agree whether the second Thor movie is awful or wonderful. So we purge the sickness for this week's 3x3 by considering our favorite scenes of vomiting in movies..

I'm mostly on Team Murawski for this movie. I enjoyed much of the humor and goofiness of these Norse titans clashing across the universe. But... (Spoilers ahead.)

Did anyone find it weird that the events of Act I include:
- Leaving the token Asian sidekick back on his planet and out of the movie
- Corrupting the token black sidekick into a masked hulk, effectively removing him from the movie
- Ordering a wife to leave the room while the men are talking, the plot later killing her purely to motivate those same men
One of these events on its own is bad enough, but all three in such close proximity is a bit much.

I also feel like this movie breaks the rules of Loki's illusions. They establish in this movie and in previous films that such illusions appear entirely believable until you touch them. In this film, Loki gets picked up, stabbed through the heart, and thrown on the ground. He dies before Thor's eyes. Are we to believe that was all an illusion too? Maybe the Loki-as-Odin reveal wouldn't feel like such a cheat if Loki was contending with a grievous injury, but he looks completely unharmed. With these new rules, Loki might as well be anyone doing anything and nothing matters. What a trickster!

Lastly, here's a question I posted an IMDb but I'll try here too:
When Malekith attacks Asgard, he suffers an injury to half his face. I could have sworn that in a following scene on his ship, his face is whole. But then later his face is shown again as injured. Am I mis-remembering the movie, or was the uninjured scene a vision or flashback? Help me remember!

I didn't see his face uninjured, following his injury. I was watching to see if it ever "healed". It never seemed to and I didn't see any continuity errors

I wasn't happy with how some of the minor characters got treated (changing Fandal's actor, dropping off the Asian sidekick for most of the film) and Foster felt more like an object for a lot of this film--deprotagonizing her for a good part of the movie. It redeems it somewhat but its there, and it bothers me.

My acronym sounds like a Norse God or a realm, huh? ;)

Truly, the original Fandral had the superior mustache.

What's the timestamp of the 3x3?

Oh, to answer Kelly's outgoing question---well, She-Ra is clearly another Master of the Universe.

I'm not complaining because I'm a father of four and I know how it changes your viewpoint, but no matter how much he wants to attribute it to The Avengers, I think it's pretty clear that seeing a movie with his son alters Dingus' critical sense.

I would have to agree with you on that, Nightgaunt.

Props to Mr. Wand for bringing up Beta Ray Bill. I sincerely hope that he makes an appearance in a future Thor movie. In fact, the Crazy Space Adventures of Beta Ray and Sif would be fantastic.
I'd be interested to hear your take on Anthony Hopkins' performance as Odin. I thought it was one of the movie's weakest points -- rushed line readings, no sense of grandeur.

I don't know if you're asking Mr. Wand exclusively, but I will chime in anyway and say that I would have to agree with you here. In fact, more than once I almost barked a laugh--no, NOT a giggle--at his line readings when he would just choose to yell a line as if it were a random hyphenate. It's a trick he has that he used to great effect in Titus, but which here just plays like an actor-on-autopilot trick. On that count Tom's note about actors phoning it in certainly applies.

But as for your point about Loki's illlusions, I have to say Thor 2 was shot through with that sort of stuff. It was a combination of inconsistency and just plan not caring. This was about as far from being rules-based action as you'll ever see. Which I can be okay with if I'm into a movie for other reasons, but it bugged me quite a bit here.

If you're going to alter your critical sensibilities, there's no better reason.

My favorite Odin line reading was Anthony Hopkins responding to some soldier's query about how many soldiers they were going to use to defend Asgard.

"As many as are needed!" he hollers dramatically. It could substitute neatly for Gary Oldman's "Everyyyyyyonnnnneeeee" in The Professional. Here's how it would play out:

Odin: Get me everyone.

Flunky: What do you mean everyone?

Odin: AS MANY AS ARE NEEDED!

The whole Loki-pseudo-Odin thing was telegraphed from the moment he got stabbed. Did y'all not notice the illusion greenishing away when the Loki-pseudo-genero-soldier was checking on the "body?" I thought the movie was really hamfisted with that and the "soldier" reporting back to Odin, so that would be the intentional point where he subs himself in, at least for me. It was instantly clear that Odin was facing Loki disguised as a soldier, so the last bit with Loki and Odin was incredibly unsurprising.

I guess I was wondering what he did with Hopkins, though.

Tom, perhaps just me, but did you guys notice that Thor's entourage was made up of the characters in your party from Baldur's Gate II. The asian/assassin dude, the angry dwarf, the female (pick any class), and the duelist type. Found it pretty hilarious....