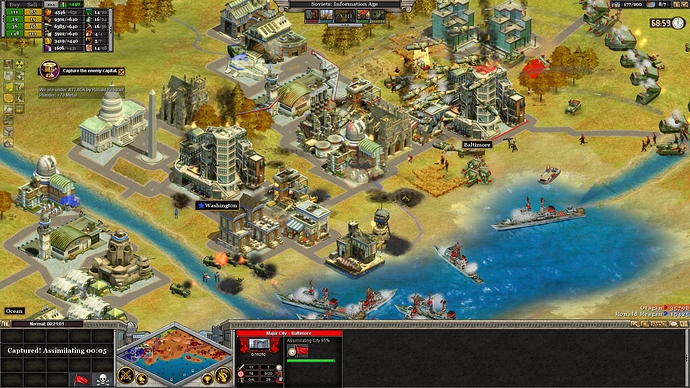 Welcome to the Qt3 Multiplayer Gaming Rise of Nations Extended Edition tournament! This is meant to be a low-impact, low-stress “tournament” to give those interested in participating a single match of the game each week for the next four weeks. Ownership of Rise of Nations: Extended Edition, currently on sale, is required to participate, and participants are encouraged to join the MG Discord server to coordinate matches with their opponents.

EDIT: The tournament has since been completed. Anyone interested in the replays can obtain them in the following four packs:

The tournament will be administered by Challonge (http://challonge.com/Qt3MG1).

There are no prizes. Participation is meant to be its own reward.

Signups were available through Sunday, December 31 at 12:00AM GMT. The tournament bracket will be Swiss, meaning there are no eliminations and the bracket will dynamically attempt to match players to other participants with similar W/L records to attempt to provide reasonably balanced matches. Thus, the later matches should be more balanced than the first.

Games will be played once per week, with each week ending at 12:00AM GMT on Sunday of each week (i.e. the first round will end at 12:00AM GMT on Sunday, January 7). Players are responsible for scheduling their own games with their matched opponent on an honor system, completing their games prior to the deadline and properly recording their results. If a player will not be available for a given week, they can notify their opponent and forfeit the round up-front.

The exact length of the tournament will be influenced by the number of participants. The expected maximum length if signups exceed my expectations by a considerable margin would be 5 rounds (i.e. 5 weeks).

The winner is to email a copy of the recorded game (found in My Documents\My Games\Rise of Nations\Recorded Games) and the game results (winner’s name) to [email protected] after completion. I will manually update the bracket as time allows to ensure a weekly progression of rounds. The recorded games will be compiled into a pack for distribution and posterity after the tournament is completed, in the event anyone would like to cast them.

Alternatively, you can report the results to me directly and I will happily update the bracket myself.

Check Tournament Play and Lock Game Speed. Save to Profile is optional. Allow Observer Chat is to be unchecked.

All nations allowed.
In case of Armageddon, the player who drops the final nuke incurs a loss.

Barring “Tournament Play”, these are effectively the default options for the game. Tournament Play blocks each player’s nation picks from one another in the lobby and on the loading screen, avoiding any theoretical pick-counterpick scenarios.

Friend each other on Steam. Agree amongst yourselves who will host, and if for some reason you cannot, then the player listed on the player listed first in the match window on Challenge should host. Create a private game in the Game Browser for 2 players, set up the options as outlined in the first post, then invite the other player to the lobby.

If a player needs to leave a game-in-progress early for any reason (be it intentional or unintentional, i.e. disconnect) and more than five minutes have elapsed, the opposing player may (at his/her discretion) allow a rematch at a later time. Otherwise, the player leaving early will technically be considered to have forfeit the round for the purposes of tournament continuation.

In the event of two such issues with the same player in the same round (for example, Player C miraculously loses power twice in the first five minutes of two separate match attempts), said player will also be considered to have forfeit.

The opposing player is strongly encouraged to allow multiple rematch attempts insofar as time allows and to only invoke the above entries if absolutely necessary.

The tournament organizer reserves the right to resolve any conflicts, disputes or issues not encompassed by the rules. Be cool to one another.

This is meant as a test run of this idea to see if it is successful. If so, then these may continue on a monthly basis for anyone so interested. There may be issues, but this is meant to be a chance to play a few rounds with your fellow forumites when you might not otherwise be able to.

I am in, but I think that isn’t a surprise.

Thank you for organizing this. If all this goes well, I think more Tournaments will be in the cards.

Since someone has my username already, I’m going as Psychcaptin

I can change your name for this tournament. Updated.

It has also occurred to me that I may not be able to specify round length manually and that the rounds will simply end whenever all matches have results reported. We can either have someone hold back results until a week has elapsed or can simply proceed as-is knowing that a round will be manually ended after a week passes. More options show up as more people sign up, so it’s entirely possible this can be tweaked later.

Thank you. So, 1 game a week. That seems doable. How long do games usually take?

I ran a test skirmish on those settings last night and was done in under an hour. The map is a little big for two players, but I’d rather have it be a little large rather than a little small.

The rules above say “all nations allowed” - does that mean we can pick our nation at game start?

Yep. You will be able to pick whatever nation you want from the start, but since Tournament Play will be enabled, you will not know your opponent’s pick until you encounter them in game.

I intend to play Random every match, but you are by no means required to do so.

So, which nation is best?

Well I signed up. Despite buying this game twice, I’ve really not played it. So here’s an opportunity to get some value out of those purchases!

Has anyone got 1v1 multiplayer advice?

How about a few practice games before the tournament. I have only played the tutorial so far.

I hear @Jason_McMaster is really good at this game.

Thankfully, I’m only trying to earn that glorious participation trophy that @Otagan promised us. I hear it super big!

The best nation is totally the Mayans. Totally.

Okay, always pick Mayans. Got it.

They got a touch overnerfed after being really good in the base game. They can be situationally good but are probably best avoided.

The only faction to specifically avoid when you’re new would be the Lakota. They have a totally unique system for their food income that is an additional barrier to learning the game.

Everyone else is viable.