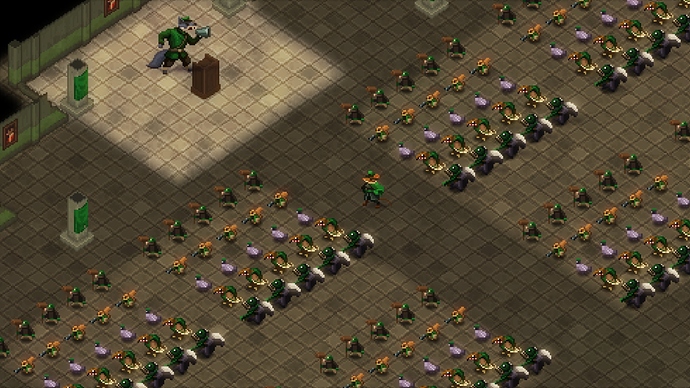 Welcome to the Qt3 Multiplayer Gaming Tooth and Tail tournament! This is meant to be a low-impact, low-stress “tournament” to give those interested in participating a best-of-three series of the game each week for the four week tournament duration. Ownership of Tooth and Tail on Steam (http://store.steampowered.com/app/286000/Tooth_and_Tail/) or GOG (https://www.gog.com/game/tooth_and_tail) is required, though Steam is encouraged due to the potential for crossplay issues. Participants are encouraged to join the MG Discord server (https://discord.gg/VPuc9Bf) to coordinate matches with their opponents.

There are no prizes at this time, so you’re signing up for a chance to play a cool game with cool people. Except that Otagan guy. Keep an eye on him.

Signups will be open through 12:00AM GMT on Sunday, April 15. The tournament bracket is Swiss, meaning there are no eliminations and the bracket will dynamically attempt to match players to other participants with similar W/L records to attempt to provide reasonably balanced matches. Thus, the later matches should be more balanced than the first ones.

Games will be played in one best-of-three per week, with a week ending at 12:00AM GMT on Sunday (i.e. the first round will end at 12:00AM GMT on Sunday, April 22). The best-of-three format is particularly essential in this game as the random maps can vary wildly and can occasionally be highly unfair, but this is generally accepted by the community as part of the game and recent map generation adjustments have greatly reduced the likelihood of hugely imbalanced Howling Veil maps.

Players are responsible for scheduling their own games with their matched opponent on an honor system, completing their games prior to the deadline and properly recording their results. If a player will not be available for a given week, they can notify their opponent and forfeit the round up-front. Players may draw a given round by mutual agreement, as well, but the expectation is that anyone signing up will make good faith efforts to play their games.

The winner is to email copies of the recorded games (found in Users*YourName*\AppData\Roaming\ToothAndTail\replays) and the game results (who won overall and what the final tally was) to [email protected] after completion. I will manually update the bracket as time allows to ensure a weekly progression of rounds. The recorded games will be compiled into a pack for distribution and posterity after the tournament is completed, in the event anyone would like to cast them or use them for research.

Friend each other on Steam or exchange information to join each other if using crossplay or GOG exclusively.

If a player needs to leave a game-in-progress early for any reason (be it intentional or unintentional, i.e. disconnect) and more than five minutes have elapsed, the opposing player may (at his/her discretion) allow a rematch at a later time. Otherwise, the player leaving early will technically be considered to have forfeit the game for the purposes of continuing the tournament.

In the event of two such issues with the same player in the same round (for example, Player C miraculously loses power twice in the first five minutes of two separate match attempts), said player will also be considered to have forfeit. This, again, may be overridden at the opposing player’s discretion.

The opposing player is strongly encouraged to allow multiple rematch attempts insofar as time allows and to only invoke the above entries if absolutely necessary.

The tournament organizer reserves the right to resolve any conflicts, disputes or issues not encompassed by the rules. Be cool to one another.

For the Humble-averse, T&T was 40% off at the time I made this post, but is no longer.

There’s one week left for sign-ups. Entries have been a bit infrequent so far, so I may pare back the number of rounds a bit if we don’t get more participants.

I am very distraught to not find the likes of @Chappers or @geggis in there >:-(

Oh! I’d not spotted this! Thanks for the tag. I know what I’ll be checking out next…

I’ve only ever played two games and they were against you, not even done the tutorial so no idea what I’m doing. No time to practice either.

You will be able to dispute the last place to @Jason_McMaster then!

I’m actually good at Tooth and Tail. That being said, I’m not signing up. You’ll have to lose without me.

I’ll join. I’m going to be at home for a big portion of the next few weeks, with unreliable availability, but we can see how it goes!

With each round having only three matches in it, the time commitment probably won’t be more than 30 minutes per week unless both players really, really, really like to turtle.

Besides, with artillery being like it is right now, it’s impossible to turtle even if you wanted to. That should be nerfed either this week or early next. Or the very day I posted this originally.

Thanks to humble bundle, I guess I have to sign up for this tournament. Damn it!

I don’t know why my sense of timing is so good with these tournaments but so bad with everything else. Bizarre.

Well, anyone who wants to learn to play, this’ll be a great chance!

There are about 36 hours left to get signed up if you want to participate. The artillery balance change was reversed earlier this week, so the current build is actually in pretty decent shape.

I will sign up, but only at the very last minute!

Well, courtesy of me having forgotten to remind myself (and being distracted by an absurd snowstorm in the middle of April), we’re off to an hour-late start. As soon as I post this, I’m shuffling the seeds and initiating the bracket.

Please remember to make sure you save replays from each match you play, either by setting the game to do so automatically (Options > Other > Autosave all replays) or manually from the post-match results screen.

Cue the usual reminder that week one is nearly at an end, with just over 24 hours left. I know @legowarrior has been busy defending his thesis (congrats, by the way), but I do only have one set of results to-date.

@Enidigm, let me know if you’ve got availability for our matches before the round ends. As long as I’m not unconscious, I should be available if you are.

My fault @Left_Empty and I haven’t played yet. I will try to get it knocked out today if he is available.

That was humilating. I may have lost 0-2, but I claim a joined victory over the unintuitive match setup interface!