Hmm , we had an even older list before the one linked above.

Once we migrate to the new forums we will be able to have a wiki-like editable thread, so we can host the same information in some form here if we want to, but I guess the same questions will apply there. I see a couple of folks have added YT or Twitch links to the database already.

Hey all, added my friend codes and usernames to that list (I’m mostly kerzain everywhere, except Nintendo’s friend code which I also added). Feel free to add me even if you don’t play multiplayer, co-op, or online. I’d like to have more names on my friends lists even if just to compare leaderboard scores, achievements, and other stuff like that with. Especially for games (or mini-competitions) under active discussion on Qt3.

I had a lot of fun about ten years ago when a bunch of us here participated in a Pac-Man CE challenge on the 360. You can see the challenge thread here:

I posted about this previously here and no one cared, so instead I’m just going to pick something and we’ll see if people feel like participating. Then we’ll see if we can take it from there. :) The first challenge is Pac-Man Championship Edition DX. Championship Mode II, 5 Minute Score Attack, Expert difficulty. Get your highest score and post it here before 11/29. Post in the other thread if you have a suggestion for a future challenge.

I would like to do more stuff like this for modern games, but the only person on my friend’s list besides my wife hasn’t posted here since 2014.

But even if you don’t want to participate in these types of things, I still wouldn’t mind having more names on my friend’s lists to make my gaming time seem less isolated to a certain extent.

I also just noticed I have a couple followers from here on Xbox One (I haven’t used the social functions in four or five years or so, not since friending people either here or Broken Forum so I could give away Diablo 3 loot caches, so I never saw them). I just followed back, so now we’re “friends.”

Anyway, this is me trying to be social.

Hey all, added my friend codes and usernames to that list

For the Steam field, I’d recommend using your Steam Friend Code found under [your Steam name] > FRIENDS > ‘Add a Friend’ in the Steam client.

Sent you a Steam friend invite. :)

They didn’t exist when the spreadsheet was created.

Added you. Now to take an overly investigative look at your Xbox achievements…

I added myself to that list. I’m either Rock8mnky or Rock8man everywhere, I tried looking up which I was where, and I think I got it right. Sent invites to Kerzain in Steam and Xbox Live.

Well that explains why I have kerzain* as a follower now. Yeeeessss, gather, my minions! When we strike they won’t know what hit them!

it is slightly interesting that autocorrect tries to turn “kerzain” into “jet sim”.

Man, I was this close to becoming Jet Li.

I’ve added you as well (not Je Li, sorry)

Cool thread! I think the only games I’ve played multiplayer (in the last 10 years) are the multiplayer mod for Euro Track Simulator 2 (which I no longer have enough DLC to continue playing), Homeworld Remastered (which I am burned out on) and LOTRO (ditto).

Is there a quick way to list multiplayer-capable games in the Steam library?

Sometimes my 2.6 year old son tries to wrestle controller from my hands when he feels I’m not giving him enough attention. And some random stuff happens while he’s pushing buttons.

I like how you found the result of one of those random actions and commented on it in my Xbox feed. Kudos! :)

I was just blown away at how effortless you made the game look. It deserved appreciation.

Hmm - another thread brought me here. My PS4/5 username is slow__hand fwiw.

Nope. It looks like it is, and then I just get a white screen. Tried two different browsers.

Work for me in Firefox. 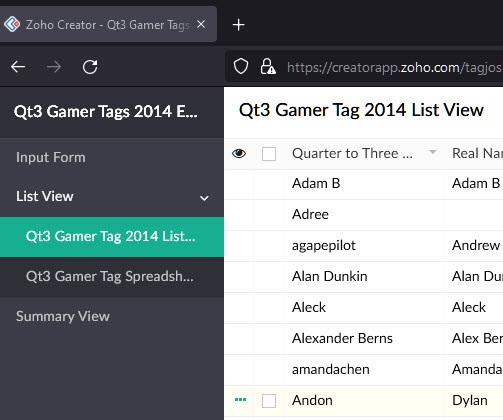 The page breaks here, on the append

Doesn’t work for me in Firefox or Edge.

Add me on Xbox! I want to see your names while driving through cactus in Forza 5. :smacktus! 1000pts: