It is my least favorite of all their efforts.

Yours isn’t an unpopular opinion I realize:) (My least favorite of theirs is Raising Arizona, though I think Intolerable Cruelty is also a bit of a trifle.) But that’s what the movie club is for at least in part: promoting our favorite films, or films we admire, against popular opinion.

But that’s what the movie club is for at least in part: promoting our favorite films, or films we admire, against popular opinion.

Absolutely. One of the factors for my nominations/votes is also, “have I not seen it recently?”

That was a factor for Get Carter. I’ve seen it about twice, each time 15 years apart. And I haven’t seen it in 10 years or so.

So not a bunch of re-views, and not a recent re-view.

And that’s probably one of my favorite. It was just, fun. Of course when I say favorite, that implies there’s a list… there really isn’t a list. I like maybe 2 or 3 of their offerings.

And that’s probably one of my favorite. It was just, fun.

This could inspire a “rank 'em” thread…

And now for something completely different

Directed by Terry Gilliam. With Jonathan Pryce, Kim Greist, Robert De Niro, Katherine Helmond. A bureaucrat, in a retro-future world, tries to correct an administrative error and becomes an enemy of the state.

This would certainly be an interesting one to discuss, lots of layers there.

It is my least favorite of all their efforts.

Really? But…The Ladykillers. The only Coen movie I’ve never watched to the end because I didn’t even make it ten minutes in. The only one of theirs I’d actively call bad (and to be fair, it’s not precisely theirs, being a remake.)

For my nomination, I was really hoping to imply to people I was going to pick a Fast and Furious movie but in fact I am nominating Better Luck Tomorrow

It’s a fucking incredible movie and it’s kinda too bad that Justin Lin went on to massive financial and commercial success instead of making more like it.

I have no idea if/where it’s streaming but I own it on DVD because it’s that good. So nyah.

Bound to happen I guess, but that’s the first nomination that I haven’t seen yet.

I vote for Europa Report.

You all should realize we have some real scientists and maybe some lurker scientists here.

And now for something completely different

This would certainly be an interesting one to discuss, lots of layers there.

Well, I know what I’m going to vote for if my choice doesn’t pass first voting. The ending of this movie remains utterly fantastic to this day. some sections have aged poorly, but along 12 Monkeys it is my favorite Gilliam (I like it much better than 12 Monkeys -I had seen La Jettee before 12 Monkeys, so some of the impact was lost on me- but it has aged worse).

We need some kung-fu.
I nominate Dao, aka The Blade.

Directed by Hark Tsui. With Wenzhuo Zhao, Xin Xin Xiong, Sonny Su, Valerie Chow. After the master of the Sharp Manufacturer saber factory abdicates and appoints On, his least popular worker, as his successor, On, unwilling to lead his surly...

okay, I may be lying about the kung-fu bit.

This forum need some enema’s and cornflakes! I nominate The Road to Wellville.

Directed by Alan Parker. With Anthony Hopkins, Bridget Fonda, Matthew Broderick, John Cusack. A story about the ins and outs of one unusual health facility in the early twentieth century, run by the eccentric Dr. Kellogg.

Such a weird and interesting movie.

Ok, so here comes my nomination.

I’m nominating this with some trepidation. There are two somewhat recent (last 20 years) European films that I find utterly fantastic, engaging and fun, and that are somewhat not that well known (I mean, they are well known for people who like European films, but I do not think they have entered the mainstream).

So I really want to talk with you guys about these films, because I think they are some of the best film can offer regarding some aspects of the media (writing and acting, specifically).

I’m going to start with the most recent one (and thus probably easier to watch). The epic love story Life of Adele (also known in English as Blue is the Warmest Color -which I think is the better title). Blue Is the Warmest Colour

Blue Is the Warmest Colour (French: La Vie d'Adèle – Chapitres 1 & 2; French pronunciation: ​[la vi da'dɛːl]) is a 2013 French romance film co-written, co-produced, and directed by Abdellatif Kechiche, and starring Léa Seydoux and Adèle Exarchopoulos. The film follows Adèle (Exarchopoulos), a French teenager who discovers desire and freedom when an aspiring painter (Seydoux) enters her life. The film charts their relationship from Adele's high school years to her early adult life and career a...

I watched this films three times in the theater when it came out. I almost never do this, but the movie was so powerful I just wanted to see if it changed on repeated viewings. Since I desperately want to see it again, the answer is no.

Since I really want this to get chosen, I will explain why I think it’s a great choice for everybody here :P:

1. A different kind of author film

Last month we watched an old, director-centric film that proved a little too distant in style or setting for many members of the club. I think that left a sour taste regarding “art films” (a term I don’t like but seems to describe basically non-genre, non-American dramas). I think this is a tremendous pity, because there’s a lot non-mainstream stuff that is easy and really enjoyable to watch, but you need to look at more recent films.

2. A different kind of author

The movie won the Palm D’Or, perhaps the most prestigious award a film can get. the film has won so many awards, it has its own wikipedia pages of accolades.

But going back to the Palm D’Or. The jury was headed by the obscure film director Steven Spielberg, and it decided to award the price not only to the director, as it’s customary, but also to the two actresses. This is extremely unusual (the first time ever) and speaks to a special kind of authorship that went on in this film. The Jury considered the actresses as much authors as the director. 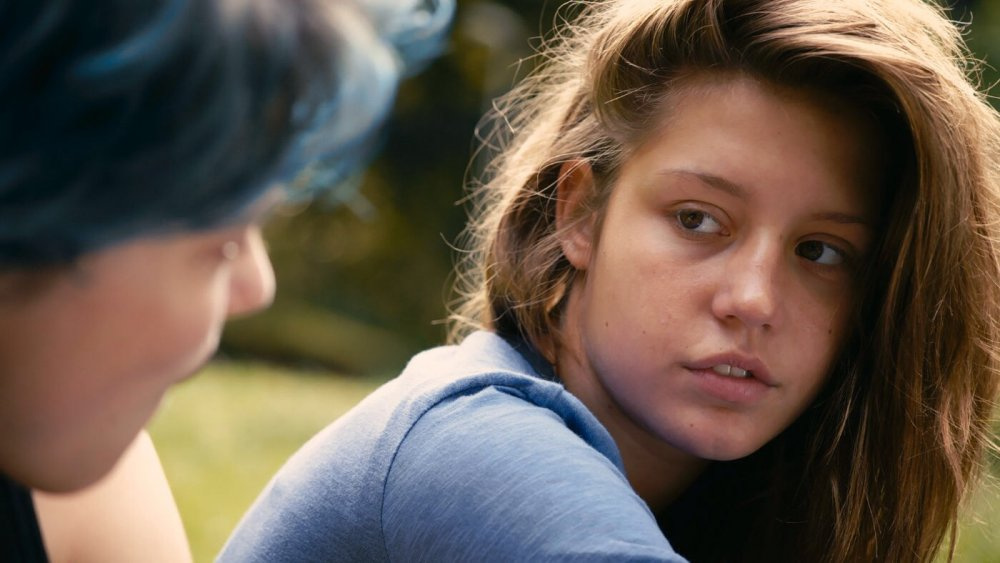 And there’s a very good reason for that. this is not regular acting. These are actresses in a state of grace. they are not reading lines (literally, since they movie has a lot of improv) they are channeling raw emotion, and the camera is capturing it. Yes, this is what I consider the best acting I’ve seen in ages. It’s so good that it changed somewhat the way I see films. This is, I believe a cornerstone film, and it si so mainly because of the actresses.

That is not to say the director had no role. He certainly did, and focused on allowing and capturing such amazing performances, but more of this later.

So, there’s some eye-candy (more on that also later) but there’s also a really good discussion to be had on whether it goes too far or whether it is really necessary.

The movie is French, and it is multilayered. Saying this is a love story is like saying War and Peace is about the Napoleonic invasion of Russia. It’s not wrong, but it is so, so much more. The movie’s brush is broad and it touches on many issues of genre, class, modernity vs. tradition, adulthood… And it does so in ways that you would not initially expect to (there’s a lot of grays to everything we see).

The movie also will allow for discussions on matters surrounding its making. I see, at the very least, three themes here.

First, the harsh working conditions for the crew and specially, given the #MeToo movement, for the two actresses. My feeling here (regarding the actresses, not the crew) mirror those I had when watching Whiplash, but I think it’s hard to discuss without reading all interviews with the actresses (or at least those after release) and watching the movie.

Second, the sexual nature of some scenes. I’m pretty sure few here are prudes, but we are talking about a wildly different Europe/USA standard that I think will allow for some interesting discussion and talking points. It is explicit (although not pornographic at all).

Third, and related, the problem of the male gaze of the director versus the definitely genre concerned themes of the movie. I think there’s no denying there’s plenty of male gazing here (but I’m willing to hear your opinions). The question is whether it diminishes the movie at all, or the strength and coauthorship of the actresses allows for mitigation. Of course, being as infatuated as I am with the movie, I’m fine with it (and every woman I know who has seen the movie loves it), but I do acknowledge it as a potential problem and I am really interested in reading other’s opinions (specially of our female members).

Anyway, I think it would be a great choice off the beaten path for most, a tremendous, cornerstone movie, entertaining and emotional and apt for lengthy discussion.

At least, if it doesn’t get picked, I hope I got somebody to watch it.

It came up on the podcast a while back. Not full episode treatment, though.

Also, ironically enough, this is actually one of the few recent French films I’ve seen. I forgot it was French though. For some reason I thought it was German.

It came up on the podcast a while back. Not full episode treatment, though.

Ah, I don’t listen to all the podcasts for fear of spoilers, and since I can’t watch as much as I used to…

I’m not sure I understand the distinction between 1 and 2 in practice. Are you proposing to shorten the deadlines for nominating, voting, and or watching?

’m not sure I understand the distinction between 1 and 2 in practice. Are you proposing to shorten the deadlines for nominating, voting, and or watching?

December is the first Month for a “Dealer’s Choice” where a “Stooge” selects the film, so it gives a lot of options for shortening the selection process.

For example, If it was my choice I could have a "Banana Republic " election from a slate of “approved” films that only took a few days. But there are a lot of options to play with because of the “dealer’s Choice”. Gives us flexibility.

Well, in that case, anything but 3.