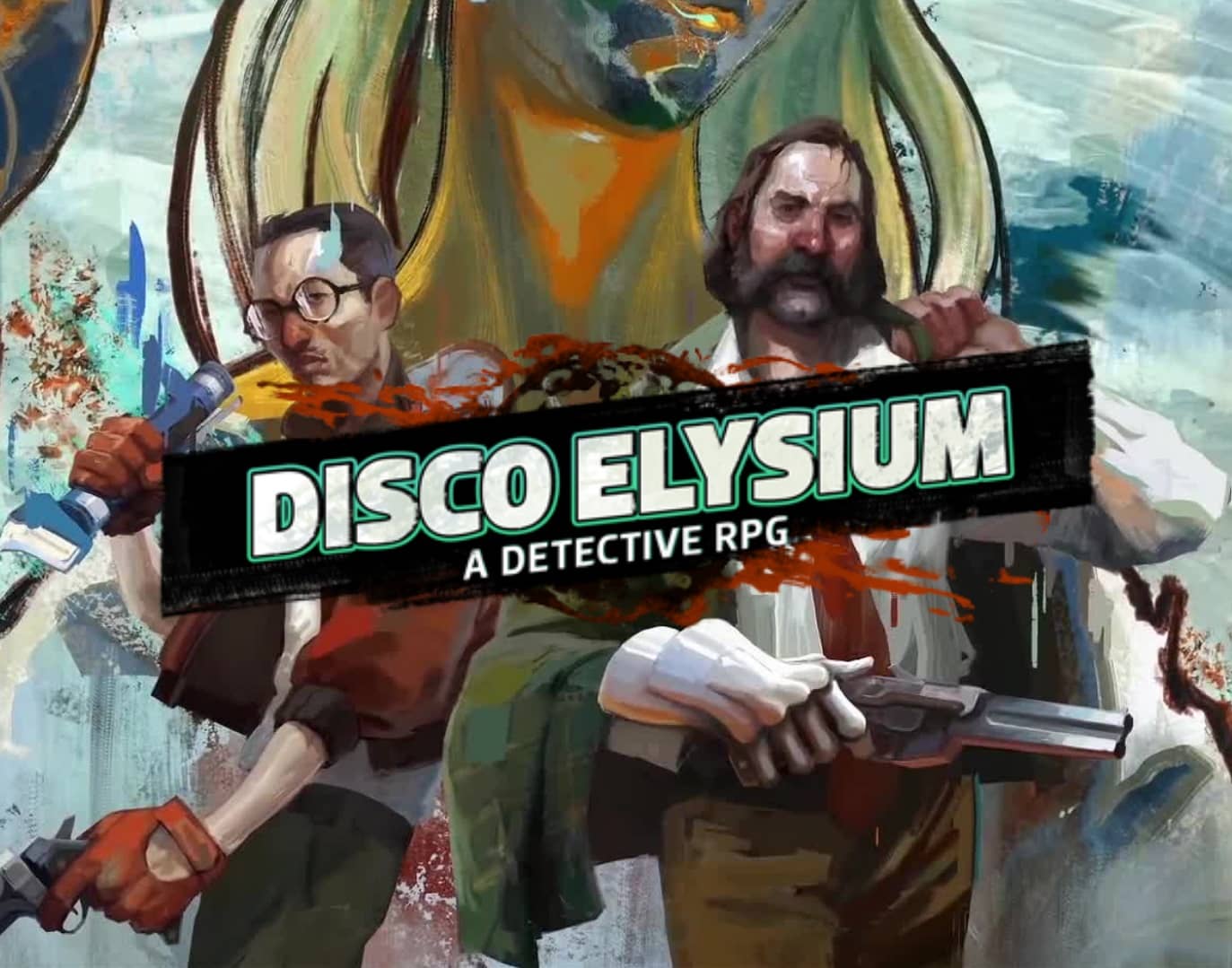 DE1373×1079 131 KB
If you thought gaming wasn’t art, 2019 sank your battleship hard, as the best game of the year was designed by a guy who has likely heard of Velimir Khlebnikov. And his team.

Just like Russian Futurism, Disco Elysium is hard to describe. As happened last year, the people who voted it #1 didn’t have a whole lot to say, with one exception. I’d say they loved it for being its own indescribable self. You could almost use their descriptions for the movie poster.

Enjoyed this more than any other game that has come out in years.

One of my all-time favorites. Just a phenomenal experience.

I love this game even though I haven’t finished it. A couple of bugs made me repeat a fairly significant chunk of content which opened the door for …

Then there was @MrTibbs:

I loved the world of Revachol the developers created. Encountering the stories of how the trauma of the past has shaped the resilience of the people trying to make it through life was easily the most engaging game experience I had in 2019. Definitely a hall of fame debut game. It’s the closet thing to the city block game Warren Spector used to say was his dream project.

Whoa, slow down! Warren Spector has never heard of Russian Futurism! But there were more comments, even from people who didn’t vote it #1. @Charlatan only voted it #2, but had this to say:

An RPG unlike anything else. Crazy, imaginative, unique. Most of the action takes place as internal monologue, but it’s fascinating seeing the world through those facets. Plus, what other game gives you the chance to kill yourself within 5 minutes of starting the game?

I’m pretty sure Andrei Bely could have come up with that, too? Right?

No game I could think of deserved to be compared to Planescape: Torment… until Disco Elysium arrived. It’s not quite the same thing, though - Disco Elysium is its own thing, boldly modelling the inner workings of the human mind in an innovative and eerily accurate way, leading to insightful and often hilarious results.

You might even say that Disco Elysium is eerily hilarious? A game about recovering your past in essentially a single building and its environs sounds like the ultimate “thinking man’s game”

Here is how the top ten fared:

Unlike last year, which was a real nail-biter, things shook out pretty quickly this year. Disco Elysium and Slay the Spire established the #1 and #2 spots early on, leaving Control as the most highly favored Joy Division simulator of 2019. If voting had been a college basketball game, the scoring would have gone like this: 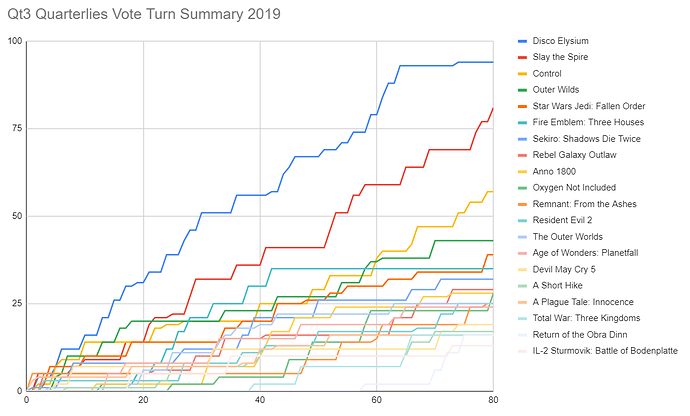 Even with the deadline being extended by two days, there were only 81 votes this year, which was way down from last year’s 132, and was actually the lowest in the last five years, below 2016’s 84 voters. Maybe this has something to do with the closeness (or lack thereof) of the vote. I am sure data mavens will let us know! As for our yearly hardcore flight sim watch, IL-2 Sturmovik: The Battle of Bodenplatte managed to come in at #20 even though there were no IL-2 Sturmoviks, or Russian aircraft of any kind, at this battle! This seems to be Achilles heel of the hardcore flight sim genre these days, shedding any kind of historical accuracy for cheap action exposure.

You can find the final tally of votes here:

Thanks again go to @arrendek, who had harnessed technology to such a point that my job is essentially effortless (except for this post part) without laying anyone off. If we can take heart from anything in this post-autonamotic age, it’s this.

There has been discussion of a “best games of the Twenty Tens” vote, which I heartily endorse. I’m not gonna run it, but we have the power. The choice is yours!

who had harnessed technology to such a point that my job is essentially effortless (except for this post part) without laying anyone off . If we can take heart from anything in this post-autonamotic age, it’s this.

I gotta say, I’m a big fan of these jokes every time. :D

So I’ve been ruminating and putting together some interesting metrics and whatnot for the Quarterlies. Here are some random things!

First off, here are some unique voters! These people voted for a game that no one else voted for. Maybe they voted for a board game instead of a video game. Maybe they bent the rules a little in their pick. Maybe they have unique taste. In any case, you go peeps!

These are broken down by which place the user voted for the game. I only go through 3rd place because naturally 4th and 5th place votes are going to be more unique.

Here is a list of people’s favorite games! Each of these games had at least one vote in the #1 spot!

Now let’s talk about scoring! The method we use is pretty straightforward, and most people fill out all of their 5 positions. But what if we changed scoring around, would that change the end result? What if everyone just picked their favorite game of the year and we just counted up the votes?

What if everyone just picked their top 3 games and we counted all votes equally?

Finally, what if we only voted a top three games and we scored them somewhat like the 5 vote scoring, but with 3, 2, and 1 points for each place respectively.

Why am I interested in these 1 and 3 vote ideas? Because it makes things easier? No, it’s because I have a running theory about this yearly vote. It seems like each year there are a few games which are widely played and somewhat good, so they get lots of 4th and 5th place votes, but hardly anyone really loves it. I’m wondering if it’s an anomaly or something to consider in the future.

I’d like to thank everyone who helped me find issues with the script and also found some data issues with people’s vote formatting and spelling and whatnot. I appreciate it!

This is an outrage! Why, I demand a recount.

Thanks to Bruce and Arrendek for doing all the hard work. Guess I really need to play Disco Elysium.

I was just going to post my shock at Total War getting so low as well! Just 4 people had it on their list?? Inconceivable!

Having watched a friend play through the first couple of hours of Disco Elysium, I’m very, very intrigued by it, but got wholly consumed by StS at years end and have done nothing else ever since.

Very interesting! Where did Slay the Spire place last year?

Thanks @arrendek and @Brooski for running this! Always insightful to see what the Qt3 hivemind favour.

I can say that I didn’t vote because I played only ONE 2019 release, which is RE2 Remake, which itself isn’t exactly new already. I feel like the annual best award of is getting less and less relevant for me, because prior year releases took up so much of my time. I would have voted RDR2 as GOTY, but it isn’t 2019 release. Or I would have voted for Subnautica, of course it isn’t 2019.

It is like Booker Awards or whatever. I haven’t even touched The Luminaries from 2013 (it is a nice doorstop though), and they want me to read this year’s award winner? Get real! (Actually I know they just want me to BUY the book. Reading is optional.)

An alternate idea might be to open up the voting to a 2 year window? (ie we vote for the last two years)

This might even create an interesting metric over time where we could see if some GOTY games manage to hold on to their successes 2 years in a row (some new games fade faster than others).

Damn, I can never participate in these votes because it seems I’m always a year behind. Control must be that freaky office one everyone was talking about.

Even with the deadline being extended by two days, there were only 81 votes this year, which was way down from last year’s 132, and was actually the lowest in the last five years, below 2016’s 84 voters

I’m curious if the “released this year” restriction impacts this, as the console generations get longer in the tooth, and people have bigger backlogs, and maybe there weren’t as many must-play AAA titles released this year? And also, maybe everybody is getting old and can’t be bothered keeping up with new games.

I didn’t vote since I never play much the year it’s released. I’m also bad at ranking things.

This was probably the first year I didn’t play a game released this year so I didn’t get a vote!

In the Gamers with Jobs game of the year poll, you can vote for any game that was new to you that year. It works pretty well.

I am surprised Slay The Spire ranked so high this year, as I feel there was more discussion in 2018 when it was in early access , than in 2019.

Slightly surprised and genuinely happy about Disco Elysium - I really loved it but I could easily see people bouncing off it just as strongly: the vividly introspective writing is slightly unusual for videogames, and the game is nearly all about the writing. (It looked fantastic as well, even down to the beautiful title screen.)

Control should hit Steam and Gamepass this year.

Wild. I played all but two games on that top 10 list. Of the 8 games I did play, the ranking here is almost identical to what I’d have put them at, with a few minor exceptions.

What this data is really telling me is that I should play Control and Outer Wilds, I guess.

Of those that I tried on the top list of 2019 here, I only enjoyed Fire Emblem: Three houses. I do own Disco, Slay, Star WArs and Rebel Galaxy but found them all to be not to my liking.

Slay the Spire is fascinating - I didn’t vote for it this year because I put it #1 on my list last year, and didn’t think it appropriate to double-dip.

It would have been #1 on my list this year if I had voted for it.

I don’t agree with that method. It’s fine if all you want to do is highlight what people played. That’s not at all a forum readers’ choice award for the best game of 2019.

If less people are participating, that means there were less people buying games, which correlates with NPD sales data tbh. This console generation has dragged on way too long and there was no Red Dead Redemption 2 level of release in 2019.

The gaming industry saw contraction in all of its main spending categories. Hardware took the biggest hit. Fans have begun holding off in anticipation of the next generation. But software and accessories also declined.

It’s worth noting that 2019 was about even with 2018 until October. That’s when the comparison to Red Dead Redemption 2 comes into play.