That was a fun watch!

In other news, coming today for ACC is the GT4 Pack. 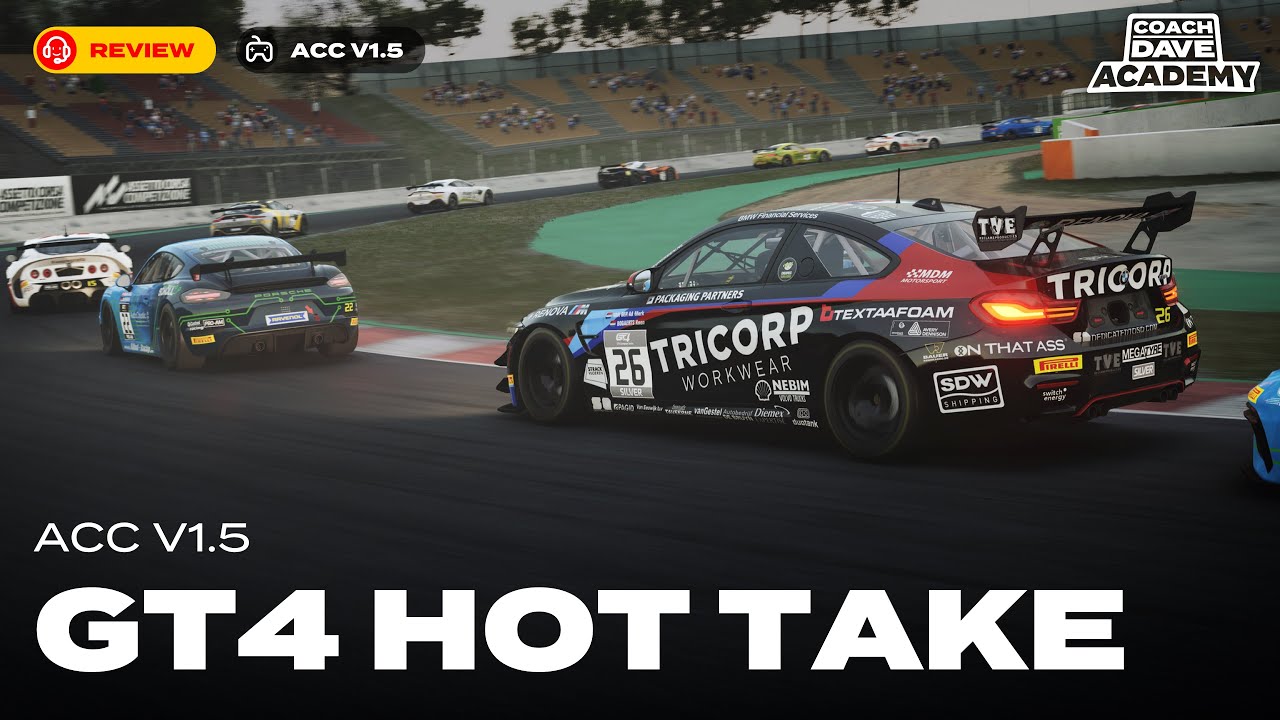 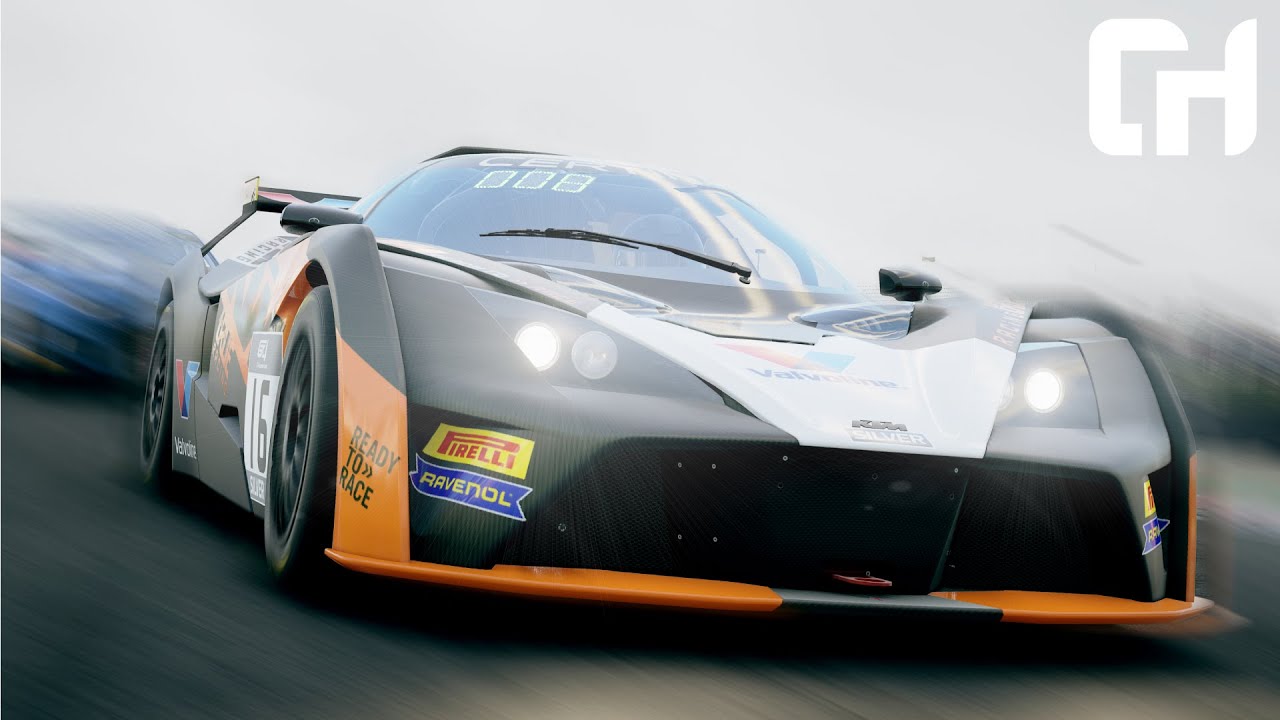 11 different GT4 cars, along with the GT4 ruleset and competitions for single player. Also now multiclass racing in multiplayer.

I am so here for the GT4 content. Hopefully I get on well with the modern Alpine, because it is one of my favourite historic cars in the DiRT Rally series.

That Alpine is a sexy looking little thing. I’m so tempted by the Camaro though, just to experience driving a six litre V8 wardrobe.

Why does every motorsport/sim-racing Youtuber have the same voice and delivery?

If you think Chris Haye sounds like Dave Perel sounds like Jimmy Broadbent then… I am confused.

I have never watched racing YouTube, but when I’ve been unlucky enough to hear any gaming YouTuber’s voice while trying to find some “no commentary” walkthrough video, they’ve always been almost exactly the same as each other. “wwwwWHAT’S UP everybodyyyy”.

Gaming youtube is filled with smashthatlikebutton stuff for sure, but I presume Fishbreath means something else, because Chris Haye sounds like a Smooth FM DJ whose show is on at two in the morning.

To my ear, at least, Chris Haye sounds exactly like Chain Bear, and several other F1-content Youtube creators to boot.

Oh aye, that’s fair enough. I can pick up the differences, but they’re quite subtle. You can probably throw in people like Joylon Palmer and Jack Nicholls for professional commentators who also sound similar.

Motor racing has a heavy presence in England and almost all of it is where the money is, so you’re going to end up with lots of people with a southern/home counties accent. Either that or we all sound alike.

I’ll be sure to watch David Perel’s impressions of the beet-a later tonight.

Ok, I just looked both of these guys up and I definitely see where you’re coming from. Knowing they are different people I don’t have a problem differentiating them, but…I wonder if I did not know that if I’d be able to. They both sound to me like what, correct me if I’m wrong, people in what I call “the Uk” know as “television presenters”.

I took the GT4 Porsche out and had a lovely time, felt really nice and I could instantly tell how to approach corners.

Swapped over to the Chevrolet Freedom Barge. Couldn’t even get a valid lap for six laps. It didn’t really brake at all and for turning it felt like it was waiting in place for the Earth to rotate beneath it. Then I sort of accidentally got a clean lap in and looked at the clock - a second and a half faster than the Porsche.

Switched over to the Mercedes AMG…

Laps 5/6/7 I make small mistakes pushing for faster times and I begin to get the impression the car is disappointed in me.

Considering the nose of the car feels like it’s in another timezone, the traction control might be actual witchcraft. I’m not so sure it cancels out my mistakes, but rather that it travels backwards in time and slightly electrocutes me to make sure they don’t happen.

So I focus extra hard on one last push and squeeze out another personal best. Then I say to myself “ok, one more lap and then I’ll change cars” and immediately go seven tenths faster.

I love that something like Coach Dave Academy exists. I’m sure there are other coaches out there and maybe even paid setups, but this seems so… professional.

I’m kind of kicking myself that I didn’t buy ACC on one of the many sales lately. I have like 7 racing games now though so maybe I should just focus on one or two of them for a bit. :)

Random thing that may help someone else. For the last 3 years I’ve always had issues with the sound in F1 games. It would crackle and just sound off. Every single year. I just learned to deal with it until I stumbled on the solution. This also fixed Saints Row 3 Remaster where I had similar issues.

The answer? Disable fast startup in the windows 10 settings. Reboot and the problem that has been bothering me for years is gone 100%. Highly recommend turning that crappy setting off. If you have a SSD drive there’s no need for it anyway.

I’m kind of kicking myself that I didn’t buy ACC on one of the many sales lately.

It’s a very good game and the GT4s are excellent because they’re all so different and make their laptime so differently, meaning they concertina all over the track.

I started a GT4 season and race one is at Monza. It has been raining lightly all the way through Practice 1 and 2 and in Qualifying 1, but the rain is nowhere near heavy enough for wet tyres, which is making it all a bit spicy.

If you put the wets on the temps have gone red before you even make it out of the pitlane and there isn’t enough standing water to cool them down again even if you drive completely off line.

So you have to go out on the slick tyres and do your best to follow the semi-dry line the cars are pushing through the water and it makes the final chicane - Ascari - in particular really exciting because there is a fast line through it, but you have to be prepared to go a bit sideways on entry as the car hits the edge of the dry/wet line. 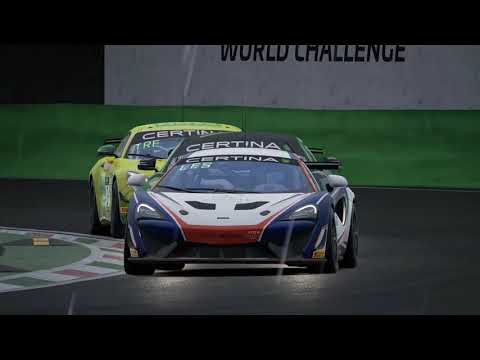 Next time it goes on sale I’ll grab it. Seems to go on sale quite often. I’m having a fun time with F1 2020. I gave up and decided to run medium traction control for now. It’s just so damn easy to spin without the traction control in those cars. Once I get better at the tracks I’ll remove it.

It’s the only assist I have turned on as I don’t find the braking that hard to manage and I found having racing lines turned on screws me up. I sometimes use it for a few laps to learn the lines, but it’s so much better to just practice paying attention to markers on the track to brake.

Right now I’m on the second race of the season and quite enjoying it. It’s really a great career mode. Maybe one of the best in any sports games. My goal is to learn all the tracks which should take a LONG time. I spent ages on Australia and still have issues with a couple of corners which drives me nuts. F1 is so hard for me as it’s all about quick precise turns. I’m just way too careful on my steering inputs. I am getting better at my trail braking though. That’s my biggest weakness for sure.

Fastest,Fast,Normal,Slowest… :) I don’t know much about the history myself. I just know that the GT3 and GT4 class cars are way easier to drive than F1. I spent an epic amount of time tonight driving raceroom and I just love that game. For whatever reason I really get the feel of the car way better than any other sim I’ve played so far. I’m planning on trying out the league next month so I’m driving Seca over and over and over and over and over. I’m now in the 1:30’s and I know there’s spots I’m screwing up. Focusing on one car and one track is really helping me get the feel for the car. Super fun…

If you can run 1:30s in the hotlap car then you’re going to be in the front pack in race condition and then provided you survive turn two lap one, you’ll wave goodbye to half the field.

One thing to practice is pit-entry. It’s important to know where the speed limit line is and where you need to start braking to be at/under the limit at the line.

Also, make sure you have buttons mapped to trigger the car’s pit limiter and, importantly, to call for a pitstop in the first place. You don’t need to give the team too much notice, but if you come in for a stop without telling the team you’re on your way the stop takes two-to-three seconds longer.

The game will announce a pit window opening and closing during the race - it’s over ten minutes long so you don’t have to instantly respond, but you must make one stop and change at least two tyres during that window to satisfy the compulsory pitstop requirement.

In these cars you only need to change two and those two should be the fronts because the rear tyres are only there to make sure the back of the car doesn’t scrape the ground.

You can stop outside of the pit window, for damage or a splash of fuel if necessary, but you have to stop inside the window to count for compulsory stop purposes.