I think it makes connecting up cities and hauling cargo very satisfying. How am I going to build my tracks that my trains run efficiently enough? How do I make it so stations don’t get too much traffic? I think that’s the high point.

The research part feels tacked on and points are accumulated too quickly (unless that changed). The AI opponent chatter is annoying. The campaigns are quite good. It’s also a pretty attractive game.

Don’t get it if you aren’t going to play it in the near future. Do you have any other games of it’s kind that you want to play, or would this move into the #1 slot for it’s type?

You can turn off the opponent chatter. The economics metagame is pretty modest - you’re mainly planning routes and signalling and figuring out what to ship where.

AI opponents do gobble up the map to a certain extent, but not as aggressively as in some other train games.

I enjoy the game quite a bit. There is a bit of interaction between the economics and the developing rail network. There is also a factor of trying to guide the location of different factory types to be more rational and fit in better with yours plans for your network. Basically if you leave the factories to be built by the private interests, they will often put up factories very far from their supply sources and markets. Building them yourself can be more efficient, but maybe you don’t have the money to do that at the time.

I agree it is mostly about thinking about how to build and develop an efficient network over time. 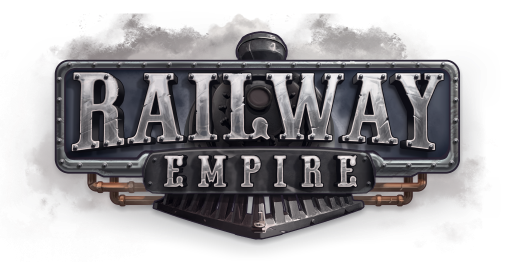 Tycoons! Today we will release the free Community Update #1 (version 1.8) on all platforms. The new update adds many community-requested features, including new buildings and functionalities to the game. More details: New Railway Buildings: Terminal...

Tracks may be deleted, even if a train is currently using it. Affected trains are set back to their origin city.

This game!! I have put 20 hours in it: loving, hating it. I didn’t know I’d like trains that much but I do. I puzzled out nice railway networks with signals, switches and so on. I can do it for hours. And I did. But as soon as I unpause the game… and watching my little empire moving… the game’s interface’s driving me insane. I just can’t manage 40+ trains with this interface. There is this stupidly scaled list of trains that needs to be scrolled, there are no useful overlays which e.g. show all routes or traffic at once, there is just never a way to get information easily like I need to check cities’ demands for goods one by one. It’s always too many clicks for everything.
And every time I do some major changes within the railway system which lead to connection problems which need to be spotted and fixed… I feel overwhelmed and …literally lose track.

How did those of you who really liked the game get anlong with the UI? Did you setup (good) routes and leave them be? I can’t put my finger on it… but I feel like I’m working against the interface all the time…

Besides the UI… my only real complaint is that it’s possible to just spam tracks and trains and be profitable nevertheless. The game’s not really rewarding/demaning a good network. There should be maintenance costs for the tracks.

I agree with everything you said. Maybe if someone created a mod?

Whoa! New update on beta branch that could address some of the issues @gingerturtle and I have with the game!

Wow, that’s great news! Thanks for the info. Hadn’t seen this one coming. I gave up on the idea that they would be still working on QoL/fundamental UI stuff like this. I’ll try it out soon.

Hey I don’t mind going back there!

That’s what she said?

I’m trying the Mexico scenario for the first time (from the DLC). It starts out easy but ramps up pretty quickly. Not sure if I will be able to expand the requested cities and deliver the weapons quickly enough.

Anyone else play the Mexico scenario yet?

I’m trying the Mexico scenario for the first time (from the DLC). It starts out easy but ramps up pretty quickly. Not sure if I will be able to expand the requested cities and deliver the weapons quickly enough.

Anyone else play the Mexico scenario yet?

Not yet. I’m kinda torn with the game. It is such a challenge to build a decent network due to the limitations of the 8 cars plus the warehouse’s holding so few individual goods, that I had kinda taken a very long break from it. How are you handling those two issues? Is making a clean network not as horrible now?

The map does feel a bit cramped as far as laying down track, that’s probably the biggest troublesome part. Warehouses can help.

The Mexico scenario is difficult because of the time constraint. It that was more lenient meeting the criteria wouldn’t be such an issue.

I am a dlc or two behind, but I’ll get them over the winter for sure. Looks like this is the remainder of their 2019/2020 roadmap. Seems next year we will get to visit @krayzkrok 's homeland , full of friendly wildlife no doubt. 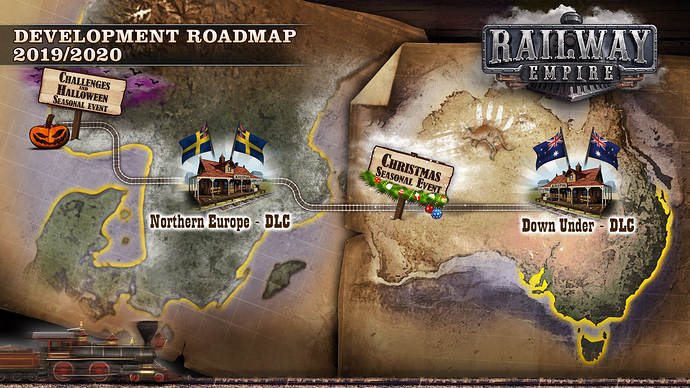 Did you play any of the dlc yet? I found the time constraints on the Mexico dlc tough.

I know this is a different railroad game, but for you aficionados of such things, have you checked out Railroad Corporation yet? Saw news it was coming out of EA soon.

Mashinky is still in EA and between the three I was just wondering which one had managed to come closest to being a railroad tycoon update?

Didn’t really want three of these, really just one, so was interested in hearing impression of the comparison.

If you care about building tracks, signaling etc. and enjoy a ‘realisticly’ working railway network go for Railway Empire. RC doesn’t offer much in that deparment: It’s single track and trains going through each other.

Mashinky is still in EA

but it’s really EA done right. The guy has added so much since it came out. He just put in road shipping. There are what he calls ‘stamps’ which is chunks of track saved as a unit. If you can’t figure out how to do a cloverleaf just download one from the workshop. It has all the signal stuff in it if you like that.

The only thing is, you don’t make money in Mashinky. You make about 7 or 8 different things, and the more advanced things are needed to buy the better stuff. This drives you forward.