RAM and the case for more

Before christmas a friend of mine was upgrading and gave me his RAM and GTX660TI, which gave me the excuse to buy an SSD and win10 for my aging Inter Core2Duo machine and give it a breath of new life. However, his DDR2 Ram doesn’t fit my board, and so currently I ‘only’ have 4GB. My gaming habits are mostly FSX, Dirt3, Arma2, RoF, but I was really hoping, even with my Core2Duo e8400 pushing the min req’s, to play Arma3 and Dirt Rally (when I buy them) at med settings, or close to.

So, would it be worth the money for 2015 games out now, or so marginal to not be worth the dough? I’m not hard up for money but my wife has a nutcracker to the expenses right now, and I need to know if it’s worth a battle.

Unless you are running a 64-bit OS there is hardly any point to upgrading your RAM.
If you do, I’d say 6 or 8 is the minimum you should be running.

If you get a lot more, you can have fun with RAMDISKs, (or if you only get a little more, you can move temporary data to a ramdrive that will automatically be cleared each time you boot.)

That said, between the upgrade to SSD or upgrading from 4-8 you’d see the biggest improvement from the SSD due to the lower latency and higher throughput when accessing data from it.

The extra RAM would just mean that data read from the SSD (or your other drives) can be pre-cached/standby in memory so it will be available quicker one you run a process that require the data. 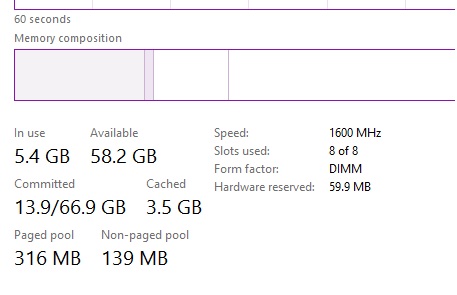 The image shows that Windows has ‘cached’ 3.5GB of data - as in not currently in use, but ready much quicker than if I had to re-read it from disk.
It also shows that current processes (applications) on my system are using 5.4GB of RAM.

If I had only 4GB RAM, it would basically have meant that the other 4GB of data would’ve been read from disk into memory, and the data in memory that wasn’t in use at that time might have been written back to disk into the swap file. (Tho, numbers might be a bit lower as I’d think Windows would pre-cache less data and probably be more agressive with cleaning up…)

Right, well, I’ve already puchased and installed the SSD and 64bit Win10 (some of my graphics apps are 64 bit), so it’s not an either/or. It’s a question of whether games I will buy, that are already probably riding the theshold of my CPU, will benefit from another 4gb. Your first line suggests it might be a good idea. (I already experience the benefits of high ram at the office, I have 32gb and it’s still swap city when I open too many heavy files… I just don’t know about games at home).

In general I’d think that the games would benefit from more memory because your OS gets more ‘breathing room’, not because the game itself will use more memory.

Once we get more 64-bit games, they could obviously benefit from being able to have more assets in memory and thus reduce loading times from disk, but it would depend on how the gameengine works. 32-bit games would max out on 2GB used.

If you’re running 64-bit graphic applications they are probably much better suited to spending more memory than most games, so if you’re gonna use both games + productivity software I’d say go for 8GB :)

If I remember correctly, doubling my RAM size has helped me get rid of stuttering in games (once every 2 seconds or so the display froze for a tenth of a second). Psychonauts really liked 2GB over one, and FEAR felt smoother after going to 4GB. So there is an immediate benefit to upgrading.

I would start with trying out the games, before deciding on the RAM. If you experience universally low FPS independent of screen resolution, your CPU isn’t up to the task anymore; if you experience stuttering, the memory may be the culprit; and if your FPS is low and scales inversely with screen resolution, that 660Ti isn’t up to the task. Obviously, in two of these scenarios upgrading memory makes little difference.

And it may sound a bit marginal, but getting rid of stuttering in games is a very nice QoL improvement.

spiffy, what kind of motherboard/RAM do you currently have? You mentioned that your friend’s DDR2 wouldn’t fit your motherboard, so I’m guessing that means either that you have a DDR motherboard or you’re out of slots?

More RAM is definitely nice to have, but if you’re running a C2D, it may be time to think about upgrading and getting a (now cheap) Haswell system.

It’s a Gigabyte socket 775 ATX board, don’t have the exact model number with me, but mine is definately DDR2, Ocz ddr2 pc 2 8500 Gold. The ram my buddy gave me, and I’m confused too, has a notch that is about a couple of mm next to mine, so doesn’t slot. I’ll check tonight, maybe it’s something else, but it came from a Xeon system, so older than mine.

But yeah, it’s a rabbit hole. A Haswell board, chip and ram would run me what, three-four hundred or so? sigh. Problem is, other than for newer games, this system still performs like butter, especially now with the SD and new gfx card.

It’s a Gigabyte socket 775 ATX board, don’t have the exact model number with me, but it’s definately DDR2, the ram is currently Ocz ddr2 pc 2 8500 Gold. The ram my buddy gave me, and I’m confused too, has a notch that is about a couple of mm next to mine, so doesn’t slot. I’ll check tonight, maybe it’s something else, but it came from a Xeon system, so older than mine.

But yeah, it’s a rabbit hole. A Haswell board, chip and ram would run me what, three-four hundred or so? sigh. Problem is, other than for newer games, this system still performs like butter, especially now with the SD and new gfx card.

Sounds like your buddy’s RAM may have been DDR or DDR3, rather than DDR2.

DDR2 is no longer manufactured. Or if it is, it’s absolutely nowhere near the scale of its heyday. Hence the high price.

Yeah, I would say you should determine that if your buddies RAM is DDR3, you should just buy a new mobo and CPU, and use his RAM in the new machine. CPUs aren’t the limiting factor they once were… but Core2Duo, on top of being slow is also old… which will negatively impact your maximum performance to a greater degree.

Ok, so uh. When I said buddy, what I really meant to say was the guy I know in the Systems department, helping me to the last gen tech lying around the office. Looks like he gave me Hynix 2GB 2Rx4 PC2-5300F-555-11… Server Memory ? He was a little red faced from the mulled wine that last day before the holidays.

I wanted to yell “8 GB just to open Chrome?!?”, but I just recently installed Oracle Database 12c, and it sucked up 8GB just after installation, running and doing nothing.