I really want to see TK succeed here, but I have a feeling he’ll need a stronger crowdfunding setup that at least promises a copy of the updated game to do so.

Yeah that would help. I think he’s not as good at marketing as he is at coding…

Just saw this over at Facebook (I have TW subscribed there).

Oh, and, holy cats, talk about your fucking blast from the past

…Aaand now for something completely different.

I took delivery of my PointCTRL set yesterday. PointCTRL is a way of interacting with clicky cockpits in VR that is pretty much like Track IR for your index fingers. You wear two little boxes on your fingers with three buttons, an IR led and a battery on your hands. There’s a little camera you stick on the HMD. The camera sees the IR leds and provides mouse input to the PC. The buttons act like mouse buttons.

This works like a charm. You raise your arm and point at the buttons in the pit, click with your thumb in a motion very close to grabbing a knob. Short of a fully featured simpit with each and every button and knob featured, this is the perfect way of interacting with the sim. It’s even better because it’s so small and unobtrusive. Unlike the complete simpit this does not take up twelve square feet of roomspace when not in use.

The downsides are its arcane procedures to get it calibrated and set up just so. Out of the box it works, but it does need tweakage to the individual setup. Another downside is the price, I paid about 200 bucks for it, and the long wait time. The man is making them at home, a small bunch at a time. It is very much a hobby project.

Anyway, for all of you VR fliers out there, I heartily endorse PointCTRL.

You wear two little boxes on your fingers with three buttons, an IR led and a battery on your hands. There’s a little camera you stick on the HMD.

What a neat idea, I am glad to hear it’s working well for you. In thirty years time I can only imagine how archaic all this first-gen VR stuff is going to appear.

archaic all this first-gen VR stuff is going to appear.

Oh yes it is. These are pretty darn raw, including an arcane setup process that really separates the men from the sheep when it comes to PC masterrace shit. But when they work they most certainly do point the way forward. point the way forward, see what I did there? yeah I found that funny too :nerd:

Remember the 50% improvement in VR performance that ED talked about for DCS? Well…

Hey guys, I know most have been waiting for some info on VR Improvements, this is what I have.

While our initial tests showed up to 50% increase in test conditions, it could not be duplicated by most customers. Some customers saw improvements, but it appears that this is dependent on machine specs. After analyzing the VR performance data, it was determined that in order to make large VR performance gains, it would need to be part of a more encompassing engine improvement that includes Vulkan. We will continue to improve performance where we can, but right now the move towards a larger engine improvement is required and being worked on.

Thanks all, I know its not the best answer, but we want to be honest and show that we are not giving up on it, but realize that bigger changes will be needed for moving forward.

eh, c’est la vie. sad if you were let down. I wasn’t. guess I’m in the lucky group that has a configuration close to the tested ones. with same settings my raw fps went from 45 to 60. so I tweaked ‘up’ to 45 again and ended up with a prettier game.

It’s good to see that they are still investing man-hours into building up, improving and extending their base engine. It is a crufty beast, and they are few so shit might take time.

I know, so they overpromised. Whaa whaa.

Is there another outfit letting me scream down a valley in a perfectly rendered virtual fighter jet? No. Ok. C’est la vie. 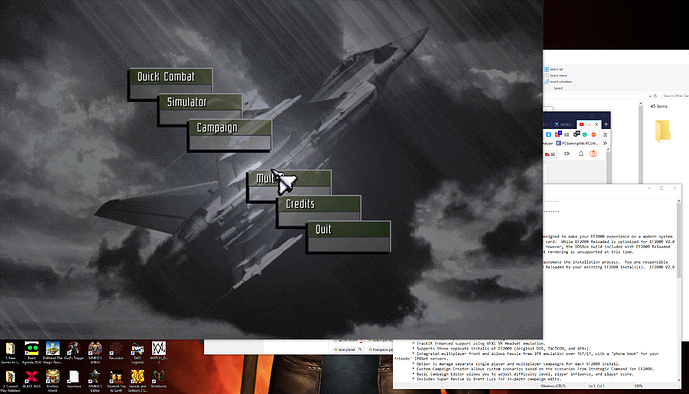 These directions tell you how to do it. Basically copy the files from the CD to your HD, then copy the setup32.exe you’ll download from the post below.

hi, you dont need virtual box or any 32bit os to install ef2000 dos and windows versions, ef2000 uses InstallShield 3 (16bit), just copy the directory of the version (3dfx/win95) you want from the CD to your hard disk and copy inside the 32bit...

And put it in your Game\GFXPLUS\3DFX directory. Run setup32.exe, let it sit a bit, and then poof, the old win95-style install screen will just pop up. I then installed EF2000, and it works wonderfully! YAY! 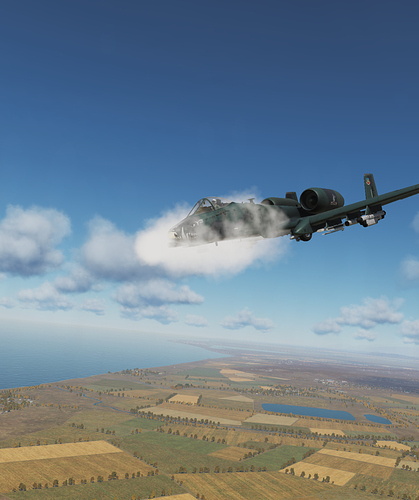 Braaaaaarp! Death from above, bitches!

Meanwhile, I have gone full retro for this weekend…

Oh my. What a doozy of a patch!

Then there’s the shiny american metal, with the P-38 standing out for its size and sheer dieselpunk glory. Amazing. I found both the -38 and the -51 better in a dogfight than I remember them from old 'n busted il2 1946. The mustang does not dip its wing when you ask it to turn.

There’s the Rheinland map. It has my home town. And certain features of it are recognizable! F yea! It’s also lacking of a couple features that they could easily have plonked down, just a cookie-cutter church or two would have gone a long way. 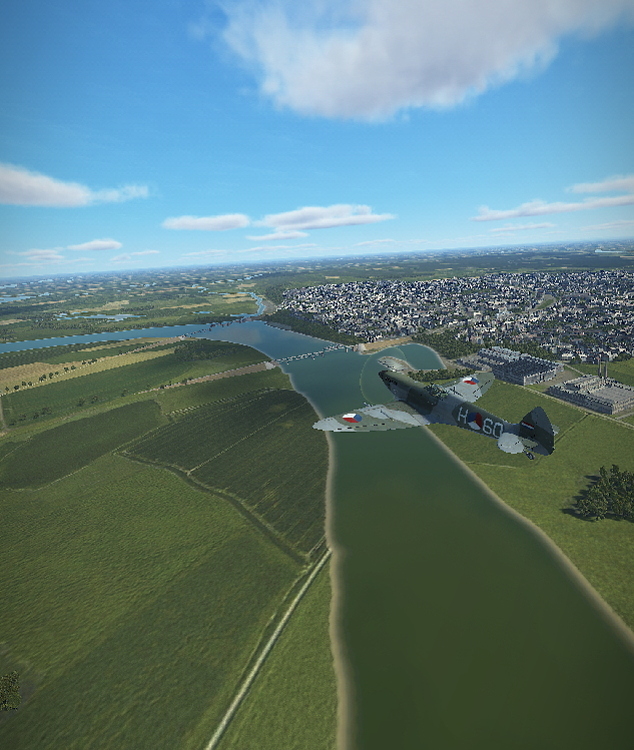 Arras is very pretty as well. I like their implementation of no man’s land. It looks like hell down there. I tried putting my camel down on the market square in Arras, but that failed. Well I landed, but my pilot broke his neck when I hit the church at speed.

But for me the true star of the show is the new pilot physics. I love how it looks and sounds. Not a simple fade-in but layered effects that compound and better be heeded. GLOC is a killer! I find I have to unlearn some stuff and be ever more conscious of my energy state. Speed is life, but too much speed will kill you lol.

Didn’t they say labels would be occluded by the canopy frame and such? guess I overlooked a setting, as that is not happening on my machine.

Gorram what a patch. This used to be the sort of stuff they’d re-release the entire thing for. It’s a 2.0!

It looks like a great patch. I would be interested to know how much improvement there’s been in the AI dogfighting, and whether this optimisation of static objects has a noticeable impact on general performance.

yes it has and yes it performs about as well as it used to even with the improved render distances.

AI flies better. I haven’t flown enough to say more than just that. 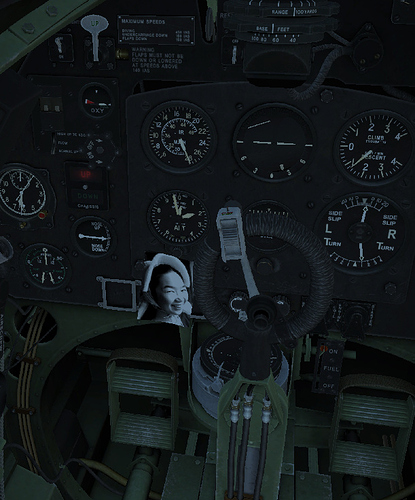 Isn’t that neat? You can import your own picture to put in the cockpit :D That’s my wife in a traditional Dutch farm woman’s headdress.