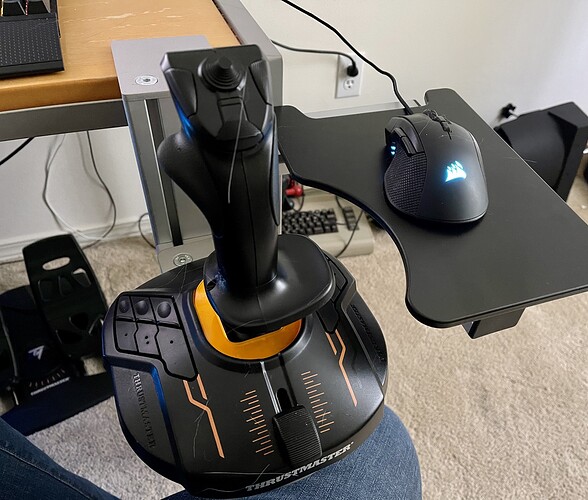 Yeah, this is my setup. Note that with the mouse positioning, I’m able to use the mouse blind with the headset on with no issues. So I wonder if some kind of mouse tree might be a better solution for you than the track ball?

I know my place is an assault on the eyes, but only so much I can do. 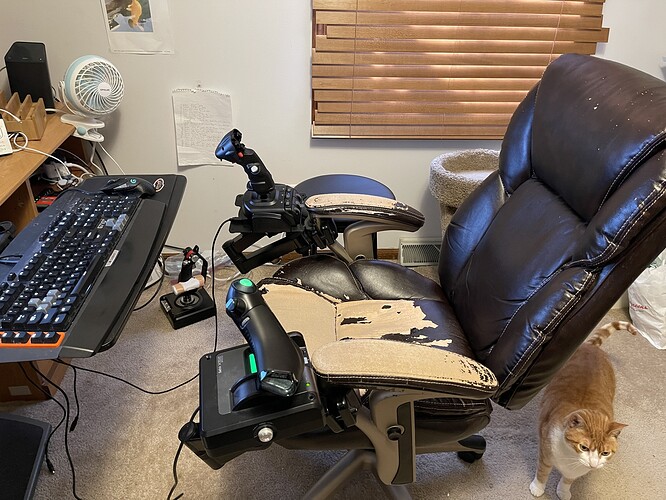 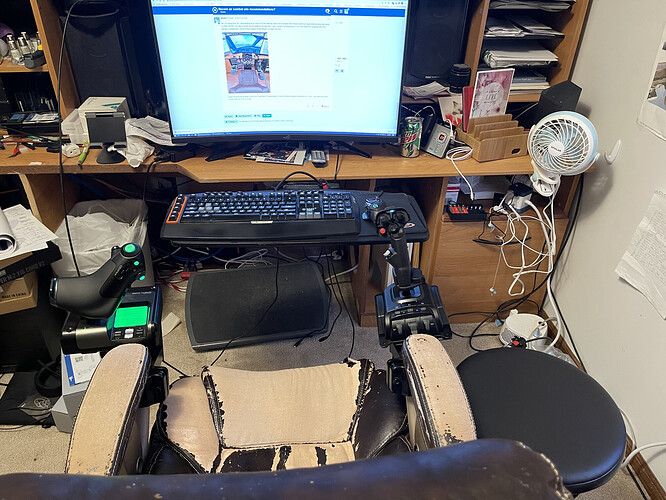 Trackball will go on round thing 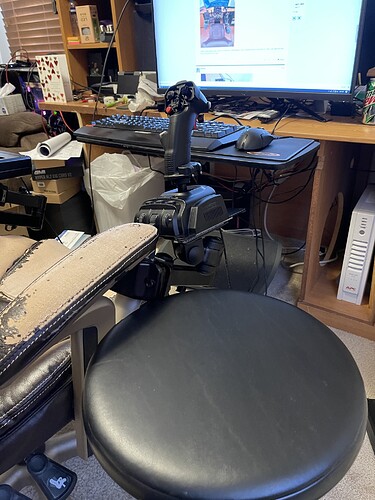 That’s really nice. I don’t see how I can attach anything to my desk since I have a keyboard tray, and I’d have to rip off the rest of the trim off the front of my desk to make it work.

Yeah, I had to remove my keyboard tray. But it was too narrow on this desk anyway.

Nice, that is the monstertech mount right? And a c64 in the background :)

Yeah, I had to remove my keyboard tray. But it was too narrow on this desk anyway.

Hmmm. I really like my keyboard low which is why I got this tray and installed it. Wonder if I could deal with the keyboard up high on the desk (high for me).

And that’s actually a “TheC64,” the modern recreation with HDMI, USB, etc. :)

Yeah, you know, just in case you gotta squeeze in a game of Mail Order Monsters between flights

Come on. The real star of the show is that Commodore 64 you have sitting so coyly in the background…

The Pentagon Is Using the SR-71's Legendary Engine for ... Something

The Pratt & Whitney J58 made the Blackbird the fastest air-breathing plane ever. Which hypersonic aircraft needs the engine now?

A lot of hypersonic test vehicles so far have been throwaway, I think—a rocket boost stage to get a ramjet/scramjet up to operating speed, and then the whole thing falls into the ocean when it’s done.

I suppose the engines are hypothetically reusable, though, it’s just the vehicle treated as disposable.

I haven’t been able to do hardly any VR gaming as my spine and neck have been giving me a lot of trouble. We’re a bit concerned with what’s going on in there again. But I’m happy today because the Virpil CM3 Mongoose throttle just shipped from Lithuania, and is in Poland already on it’s way here. The Gladiator NXT came a while ago and it’s ready to go as well.

HOTAS like the Saitek X52 Pro are woefully inadequate for VR flight simming if you want to actually keep the headgear on your face. I can’t wait for the throttle to get here. After all this time - finally having proper number of buttons, having a truly functional throttle designator switch/hat… it’s going to feel like I’m in the lap of luxury and plenty :)

Even if I’m not in VR all the time in my flight sims, at least I’ll know I’m ready because I’ll have muscle memorizes everything to the new HOTAS, and it won’t the blind flying the blind hehe.

@schurem Have you tried this?

Yes I have, and I was running it at half when my G2 broke. Still haven’t heard back from them.

<.edit> no not like that. Huh, 20% boost eh. Sweet. Gotta give that a shot when I get my wings back. Currently playing euro truck sim with an xbox controller. Fun and chill, but not DCS :/

Guess what came today? You didn’t tell me I’d have to build a desk just for this throttle. It takes up my whole lap right now! I’ve got some configuring to do. I seriously think this thing is going to to kill my chair LOL. 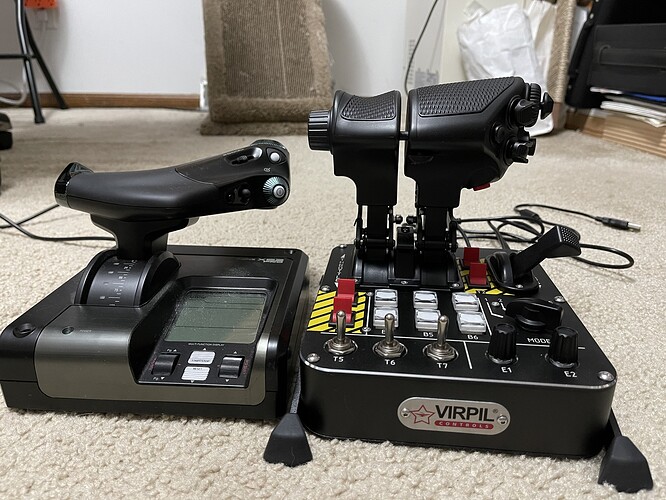 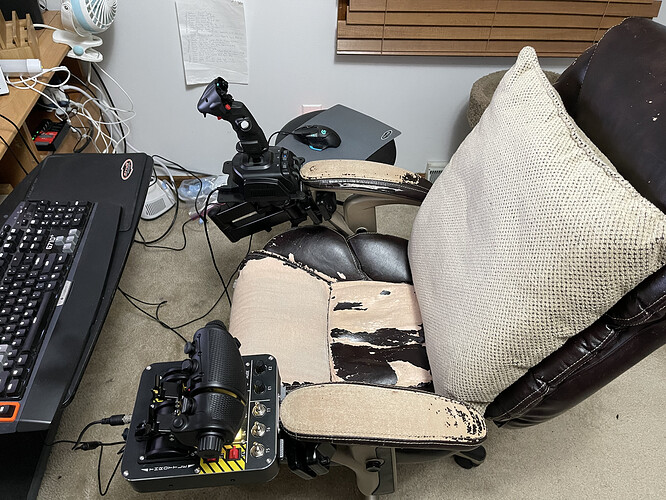 Wow, that is some hard-core gear dude!

I mean, it’s a cool setup, Jeff, but only because they don’t make these anymore… 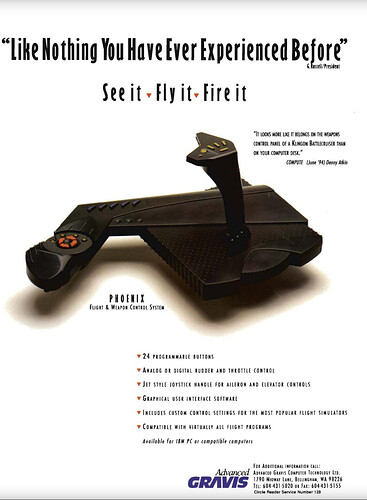 I’m kind of at a loss. How do you comfortably hold that thing?! Did you like it? Outside of saying it belonged on a Klingon battle ship, that could go paths ways LOL.

That quote was taken from a feature article where I mentioned it was coming soon and was worth looking at when it actually shipped. :)

I honestly can’t remember if I ever reviewed it… But I do remember using at as my joystick at work for a while. The throttle was bizarre – you turned the handle at the far left. It had more buttons than most sticks of the day, but it was kinda huge on your desk and didn’t have a view hat.

These old magazines are treasure troves of gaming history, that’s for sure. Here’s my giddy reaction after playing 1942: Pacific Air War, which was SO detailed you could see the individual landing gear struts on a Wildcat, and which allowed you to pan around a virtual cockpit – using a second joystick.

(Also a first impression of Star Reach from Interplay, attn @BrianRubin. I’d decided 4X games were old hat by 1994, so this real time 4X was innovative. I remember you could play split-screen against a human opponent, each sharing half the keyboard…) 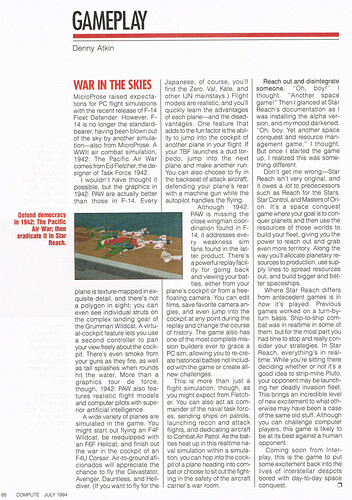 PS: I blame “Masters” of Orion on the copy editor. I know I new better.