I unfortunately had this encounter right before entering the barber shop. That bounty is the result of Arthur shooting his way out of town after his attempt to surrender to the authorities went askew. I did start with a measly $50 bounty before I went into town.

I’ve been playing Arthur as fairly law-abiding except for story related criminality (which is significant) but I didn’t have much practice dealing with the police in a non-violent way. I had my gun holstered but I guess I took too many steps and they opened fire.

There are a lot of police in Saint Denis and unfortunately I got trapped a couple times and separated from my horse. It was just about the most violent and unsophisticated escape possible basically.

I’m finally getting a new computer!!! (yay), so this is going to be one of the first games I go back to. My current rig can “play” the game on really low resolution, but it’s a miserable experience lol. I actively dislike the gameplay in this, and all rockstar games, they are just so horribly clunky to me, but the world building, and tooling around exploring is certainly something I can do for many hours.

The other day, I came across a fella suffering from a snakebite. I gave him a tonic and went on my way. Today, I was in town and he was on the porch of the general store singing my praises. Told me to go inside and pick out anything I wanted on the house. Got me a sweet new outfit! I was more excited than necessary afterwards. But Arthur looks good!

What’s funny in this version of RD is when Arthur runs across someone like the snakebite guy more than once in the wild, he acknowledges it with some smartass comments.

Fired this up on the PC for the first time and have been playing online. (Had played quite a bit on the PS4 some time back.) Managed to level up to 38 without too many issues, but for the past few days I’ve encountered cheating in every play session. Most of it has been minor/harmless, but on two occasions I was magically teleported (with the wagon) from my Trader delivery destination (just before reaching it) to the North Pole, and yesterday I was imprisoned in a wooden cage by a group of players, one of whom had somehow transformed into a cougar. The former was mostly just irritating as I would have to start over on the mission, but the latter was downright creepy, with dirty, scruffy players lurking around the outside my cage, presumably waiting for me to do any number of futile things for their entertainment (e.g. try to attack them, try to destroy the cage). I decided to do the last thing they wanted me to do, and just sat there quietly smoking and drinking (in the game) for 20 minutes while I read a book and they waited for nothing.

And that’s how the West was won. Well played, @barstein!

My preferred course of action in those Red Dead Online situations was to just do whatever it took to log out, even if it meant alt-F4ing the game. But that’s usually because I was pinwheeling through the air from being exploded. I don’t think it would have been nearly as disarming to my antagonists to just ignore them and read a book in that case. :)

I appreciate that, Tom! Boring griefers to death brings me some degree of pleasure, I have to admit. I have no idea how these guys managed to stick around for so long without passing out or leaving, but somehow I don’t think it was due to being super patient; I found myself imagining them roleplaying a cruel bossman-henchman dialog that I couldn’t hear, or something, and I was grateful that they probably left their mics on Posse mode.

Some of the hacks I’ve seem were very surprising and interesting, such as this one.This fellow was the last thing I expected to see strolling down a road. 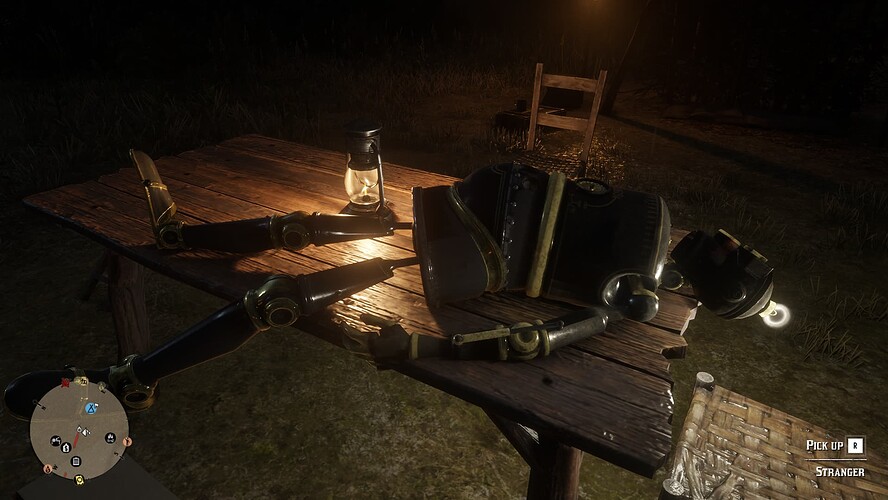 Holy crow, this campaign is long! Of course I got distracted with other games during the holidays but jumped back in last weekend. At the end of chapter 3, I looked up info online and was like, “Shit! Three more chapters?! Plus epilogues?!” I hit chapter 6 today and I really wish there was a “Go fuck yourself, Dutch” option for Arthur. Damn…

The downward spiral of everything is so interesting, yet depressing, to watch. And Saint Denis is one of the most impressive settings I’ve ever seen in a videogame. Absolutely gorgeous, especially at night.

Finished the main story today. I was particularly broken up over the loss of Jezebel, the horse I’d had since Chapter 1. It made Arthur’s “Thank you” to her all the more poignant.

That was such a devastating experience. It absolutely gutted me.

Agreed. I’m taking a break before hitting the Epilogue. Probably. And then will I load up part 1 on the XSX? Probably.

I did the PIA trek up to get the White Arabian as early in the game as I could. I was tempted reading all the debates about what the best horse is in the game to “upgrade” but Destiny - my horse”s name - was with me from beginning to end. My loyal partner through the entire journey. I would have never changed horses. (Destiny was also wicked fast - on some bounty missions where you get jumped taking the bounty in, instead of fighting my way past I simply (and easily out ran them. )

I had to go to Blackwater as part of the Epilogue, but I just kept going instead. Jumped on the RR tracks and made it to MacFarlane Ranch. From there, I remembered the way to Armadillo, so I just kept riding until I hit there and got killed by a posse in front of the sheriff’s office. All of the landscapes are pretty much the same. It’s fucking cool. I don’t know if there’s really any post-game stuff set there or not, but it’s cool all the same to be in that world in a new engine.

I don’t know if there’s really any post-game stuff set there or not, but it’s cool all the same to be in that world in a new engine.

Not sure if this is a spoiler or not, but I believe the intent of the epilogue is to lead you into Red Dead Online, where this more traditional American Southwest desert area you knew from RDR1 will be in heavy rotation.

Interesting. Well, I don’t do online and I’m taking a break after finishing the epilogues, but I’m glad to know I’ve got a big, beautiful world to ride around in with bounties to collect, animals to hunt, and fish to catch. Well done, R*.

My only Epilogue question: What was the point of having Dutch return in my standoff with Micah? I thought it was unnecessary.

At some point in my game back when I tried getting the Arabian but never could get the “horse whispering” down well enough. Also, in general something about breaking the horse must have changed between RDR1 and RDR2 because it was easy peasy for me in the first game but in the second, not at all. I’d always get thrown.

It sucks that there’s no way to capture/tame a Turkoman horse* in the wild in the game, because those mofos are expensive-- no way to be “high honor” and get the serious coin required. There used to be a bug in the console version that would let you steal one, essentially, but they “fixed” it.

*It’s nearly as fast as the Arabian, a lot less skittish and Arthur looks appropriately sized instead of comically large on its back.

When I played it years ago the secret to breaking a horse was to push the controller stick all the way forward and leave it there until the horse gave up. No moving left or right. Maybe they changed it, but I can confirm it worked for the white Arabian.

Good tip, thanks. If I ever play through the game again I’ll remember that.