I’ve used resurrect once after couple of my characters died during the fight in the Iron Throne headquarters. As in I went to temple, ressurected them naked and came back. That was like 10 minutes to remember what were they wearing and stuff. So yeah, I won’t let anyone die in the future.

It’s very strange. Early game was yout typical early D&D hell: everything can kill you in a hit or two, and you probably can kill everyone in a hit too. In the mid game I have a variety of tools to deal with anything I find. But now everywhere I go I see that mass confusion. My MC is a bard and so is Imoen, and I have Edwin so I should be able to alpha strike casters but it’s still irritating.

Sarevok down. I’m skipping the DLC and Dragonspear and diving right into BG2.

Just picked up the drow sorcerer and watching all of his spells roll out is super neat. Seems OP as well.

The drow sorcerer is OP. He is a whole level ahead of your party on encounter, by design. Which is huge because the BG1 level range is like 1-8.

I’m about done myself and the inventory bullshit is really wearing on me. So many damn scrolls to explain someone’s evil plan. IIRC they get rid of most of that in BG2.

I didn’t know this the first time I played, but there are scroll cases to hold all the scrolls. They only take up one inventory slot.

There is a potion bag too. My team is level 3/4 and the drowsorcerer is level 6. 👹

Seems like all the really fun characters are all evil. I may have to rethink this current party! ;)

There is a potion bag too.

The first time I played, I had no space left over in my inventory, since I didn’t know what could be useful later. Now I barely take up any inventory space, and any gems I find quickly get sold. The lack of initial knowledge about how the system works makes the experience tortuous, which is a shame.

Man I sympathize with that. I am playing Atom RPG and its the same problem.

Scroll case, potion case, and gem bag. Thinking back on it now I am not sure where to get any one of them.

Scroll case, potion case, and gem bag. Thinking back on it now I am not sure where to get any one of them.

I found out that the scroll case can be obtained using a very easy quest in Beregost. Simply go to one of the houses marked on the map (I don’t know if it was marked in the original game) and perform that quest, and you get the scroll case as a reward. This case can hold 100 scrolls in the enhanced edition, so you’re set. Also, stacks of arrows being raised to 80 is very helpful.

If you also avoid taking stuff you don’t need, like weapons from monsters and unnecessary armor, there really isn’t an inventory problem anymore.

I think I was level 5 when I encountered him. According to the Wiki there is a player character XP requirement. I tend to go side quest / explore everything crazy after I finish the mines before proceeding to the first bandit camp.

Yea - I went looking for him specifically in order to round out my team. Didn’t like leveling with just 5 even tho they were leveling quite quickly. Didn’t realize he came at level 6 automatically. Usually I don’t like my casters having free reign to cast spells when they want, but he has so many he’s having a ball nuking hobgoblins.

What is the easiest way to install mod packages now?

Gibberlings3 has a new home.

He shows up again in Siege of Dragonspear. I had three mages in my party then. My wild mage main, Edwin, and him. It was 24-7 magic Armageddon. The other 3…Dorn, Viconia, and Safana (BG1 only Thief).

When I transferred to BG2 I replaced Safana with Jan and Baeloth with the evil dwarf axe and board beserker. Back down to 2 mages. This was my party for the rest of it, which worked very well.

Example 42 for why BG2 is the greatest RPG ever. 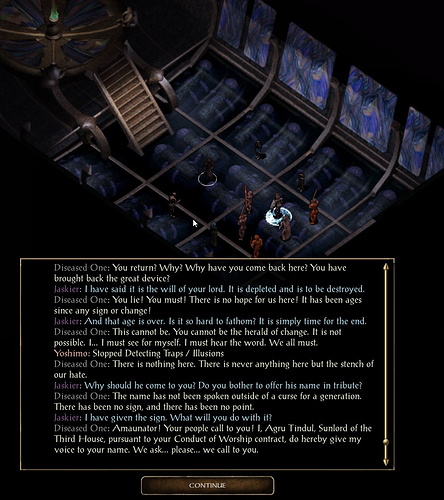 That is definitely a good moment. Bal… no shields? all two handers on your melee? Gutsy.

That is just those diseased idiots in the sewers area offshoot opposite the all-see-eye cult. What am I missing?

It’s a cool bit of revealed world building that ties neatly back into the Umar Hills. What’s not to love?

I’ve been replaying BG2 with the great EE version and remember now why I’ve never finished. I suck at combat.

Last night I tried one battle in the basement or sewers of the Copper Coronet multiple times and the best outcome was only one party member dead. And then I realized I don’t have enough cash to revive her at a Temple. I’d spent most of my cash on a spell that I thought would help me win the battle.

I love the game. I wish I was better at the tactics of battles.

Isn’t there a story mode that helps with that?