You do realize that the meter positions are just the wording in graphical format, right?

And fuck that noise. It is unwelcomed clutter, and a real eye sore.

That leaves us lacking spell-wise though.

What kind of party is everyone running with? And any tips in that regard?

Two mages is my recommendation. Everything goes super smooth. If you can get Baeloth the evil drow + Edwin. You really only need one tank character in BG1. (And Minsc is no tank)

Honestly all the best characters are evil.

For now, the party is my own elven Archer, Imoen, Khaleed and Jahiera, and now Minsc and some sun monk. I guess I will swap the monk out with Dynaher when we rescue her. That leaves us lacking spell-wise though.

No, this is the canon group. It’s fine. Dynaheir is a wizard (invoker).

Also, Jaheira was anxious to get going at some point - does one risk losing her and Khaleed?

Thanks guys! I don´t do evil characters though, so this will be my party

I’ve gotten to the ending battle of BG, and honestly… I’m not sure it’s worth the slog to finish the final showdown. Sticking a cheap maze at the end of the game was… quite underwhelming. Then you have the final 2 battles. Part of the problem is that these battles are so much harder than anything I’ve seen in the game so far – I really haven’t been trained to find the most efficient spells to take out such powerful foes – foes much more powerful than any member I have in my party, even at level 7. Looking up some quick solutions online, I find that you basically need to cheese the battle using some overly powerful spells. My intuition is that I’ve seen everything BG has to offer, and I’m ready for BG2. In general, while the game was pretty good, it wasn’t exceptional, particularly in the quest and NPC department, and I’d say it’s inferior to the Dark Sun games, not to mention the brilliant Planescape. Anyone have any additional insight here?

Buff the shit out of yourself, including using potions. Then focus fire on Sarevok. The game will end the second he drops.

In general, while the game was pretty good, it wasn’t exceptional, particularly in the quest and NPC department, and I’d say it’s inferior to the Dark Sun games, not to mention the brilliant Planescape. Anyone have any additional insight here?

It primarily was enjoyable at the time for successfully adapting so many of AD&D’s rules, including alignment impacting relationships, weapon speeds, spells that weren’t in the gold box games, the Forgotten Realms pantheon in a more meaningful way - and using real-time/pause and RTS commands for accessibility, good miniature graphics for the times, companion dynamics/scripting which were new at the time (even though simplistic compared to what came afterwards).

Sarevok can be beaten with one easy thing. But you know think it really is a tough battle. Traps, and he just crushes people. And his boys.

When and if I run in there now its with a few things. But I don’t recall now every doing it straight – hmm maybe with a coupla archers (op in that game). But that was probably 15 years ago.

I should say that I kind of plan for that battle. And the penultimate battle before it because that one isn’t easy either.

And the penultimate battle before it because that one isn’t easy either.

I had to play that battle probably 15 times. Managed to cheese it by spamming AOE wands. The problem in that battle is that you’re attacked by 2 fireballs right away. But this last battle is crazy. I defused all the random traps that web you, and you still have Sarevok, another huge fighter, and 2 super wizards with a whole bunch of defense spells.

Sarevok can be beaten with one easy thing.

You guys really need to hear about this one weird trick

Just fired up my save. Here’s Khalid, everyone else is buffed about the same. 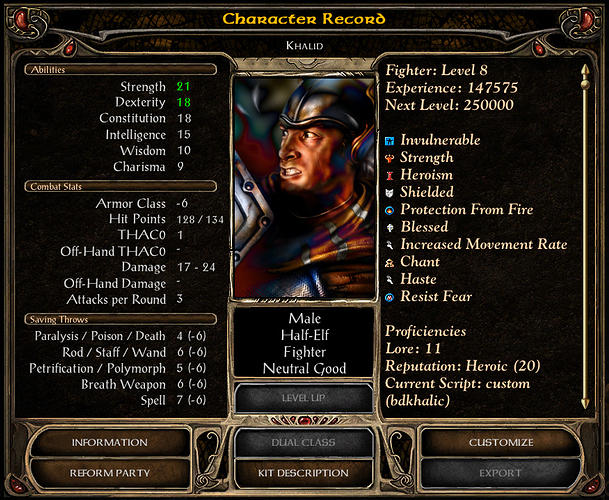 And about 5s into the combat. 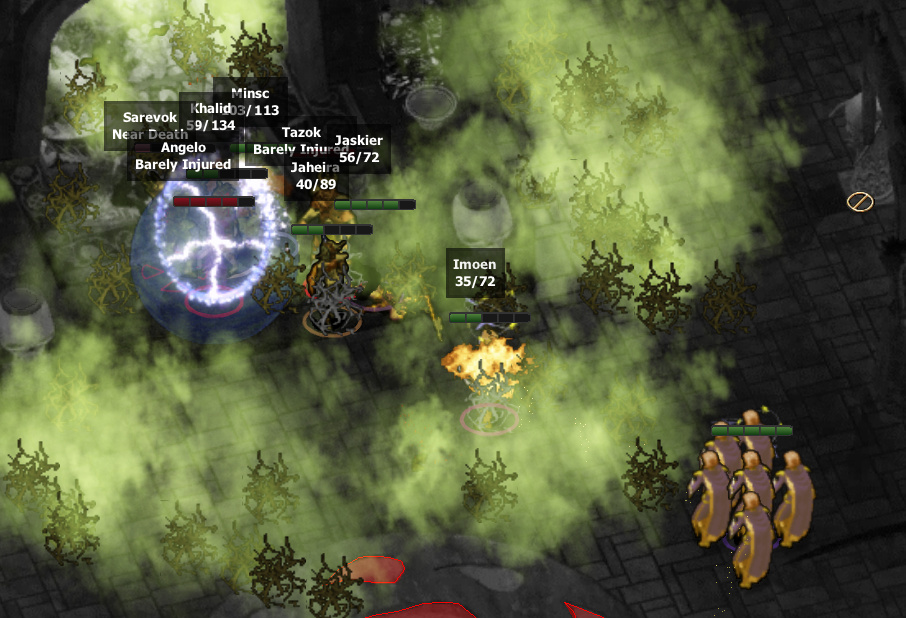 The fight is tough but doable, but it is not the hardest fight in the game. That honor goes to that demon summoning fight at the end of the Tales of the Sword Coast quest line.

If you have 2 mages like you should, I would have them spam fireball under haste into Sarevok and his troupe. Use wands too. They’re are a ton in the game. Web spell is good. Don’t be afraid to sacrifice some of your party to lock down some of the melee so your mages can really light up the room. Target the enemy mages first as Sarevok and that Hobgoblin can be given the run-around.

I always avoid walking over the Baldur’s Gate skull icon on the floor because I never bother to disarm the traps.

I cheesed the Sarevok fight by pulling him outside of the building. I think I was able to take care of his group one person at a time this way. Hey, I tried playing it fair several times before resorting to this tactic!

If you have 2 mages like you should, I would have them spam fireball under haste into Sarevok and his troupe. Use wands too. They’re are a ton in the game. Web spell is good.

One of my issues is that my dominant strategy so far, which has been web/grease/fireball wand, doesn’t really work here. Sarevok and his gang seems to have high fire resistance and freedom – all 3 spells have minimal effect on them. One of his wizards also has explosive arrows that are essentially endless fireballs, so even if you mess up his spells, he can dish out serious damage.

Target the enemy mages first as Sarevok and that Hobgoblin can be given the run-around.

So far the only strategy that worked for me given what I have is to wand-of-holding Sarevok until it sticks (takes many attempts), then placing a bruiser on each of the mages. I got mutual destruction as the mages died, but so did my guys. Eventually only Sarevok was left, still being held. After dispatching all the other goons, the spell expired though, and Sarevok proceeded to destroy Khalid and then me (Minsc was busy confusedly cleaning the cobwebs on a distant wall). Sarevok himself is brutal – both permanently hasted and with the strongest attack in the game so far. Oh yeah – his THAC0 must be pretty good too, since he can hit my -6 AC fighters without a problem.

I think I might try going back to town before the fight and stocking up on monster wands/potions/protection spells. There hasn’t been a fight in the game that’s nearly this hard before, so I didn’t really feel a need to sort through my consumables, and I have 60,000 gold sitting in my inventory.

Well now you guys are making me want to go back and take that fight on again. I just replayed it fairly recently (though by BG2 playthrough has stalled, I should get back to that) and I got frustrated after multiple failures against Sarevok and just moved on. I played the game back in the day, so I didn’t really need the ending cinematics.

I don’t know if I played through the Tales of the Sword Coast stuff, though. Hmmm.

Ok I reloaded an old save and beat him after a few tries. Super sloppy since I haven’t been playing the game. My wild mage had two bad surges at the end. 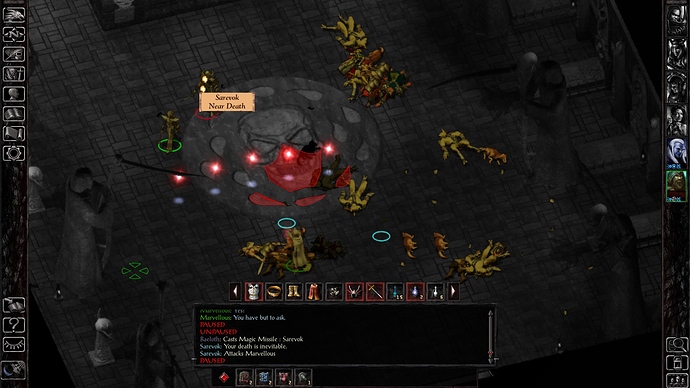 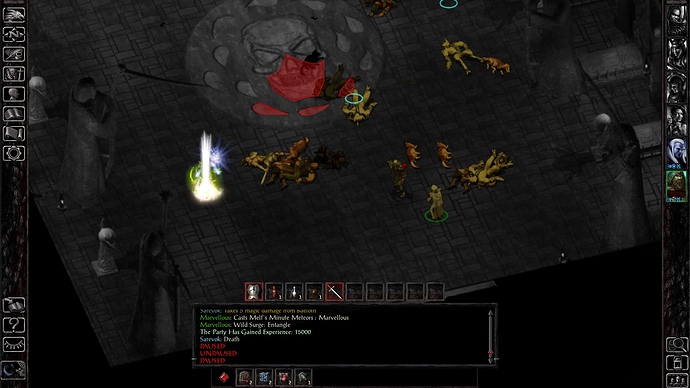 Turn off AI so they don’t run into traps. Start by casting cloudkill and/or fireballs blind into the shroud to force aggro and kickoff some damage.

Kill the archer that uses fireball arrows and the mage first. If you have an archer with magic arrows (+2 ideal, or poison). Target them.

I used my melee party (basically worthless) + wand of summoning repeatedly to keep everyone busy while my mages nuked everything dead including the rest of my party. The spells I mainly used were cloudkill, skull trap, fireball, minute meteors, and magic missiles to take down everyone.

Between wands and mage spells you should be able to do the job. And while I don’t remember the exact fight (I should having finished the game at least three times) you may need to recast dispelling spells. Also it is always best if possible to concentrate fire on just 1-2 enemies, and in this case the enemy mages.

There should be (unless I have confused BG2 wands with BG1 wands) wands that anyone can use to cast fireballs, monster summoning, resurrection, even dispelling I think. Wands by the way can be sold and repurchased to recharge them, IIRC.

There should be (unless I have confused BG2 wands with BG1 wands) wands that anyone can use to cast fireballs, monster summoning, resurrection, even dispelling I think.

Most wands can only be used by wizards.

Wands by the way can be sold and repurchased to recharge them, IIRC.

Did not know that!