This worked really well for Quake 2 for me (about a year ago): http://www.quake2evolved.com/news.htm

For Unreal, you can get a patch at this site that will let you run/install it under XP and Vista: http://www.oldunreal.com/

Ah, Evolved looks vaguely familiar. I’ll check it out, thanks.

The sourcecode to Unreal has never been released, so no, not in the same sense as the quake engines have been updated.

Yeah, not having the source code is a pretty big hindrance. Oh well, I guess just getting Unreal running decently under Vista will have to do.

These nostalgia sessions always make me appreciate how far PC gaming has come (even if it is d0med). By default, Quake runs in a resolution low enough that the pixels are like bricks now (all the better for HRose to admire them!), you cannot change the resolution from within the game when using a 3D renderer and mouselook has to be entered via the console or a config file. And we liked it!

I picked up Quake when it was new but avoided playing it until GLQuake was released. I have to admit by the time I went through the fourth episode the traps/gotcha! style of design began to wear on me, but I was always dazzled by the sheer 3D-ness of it. The nigh-endless user mods and maps kept things hopping for a good long time, too. Man, that seems like a lifetime ago.

I know HRose has already said he prefers this renderer, but I do recommend checking out nQuake if you’ve not kept up with the client development. It’s seriously impressive!

I use the nQuake package (and specifically the ezQuake engine in there) for multiplayer and for playing “vanilla” singleplayer Quake, and I’ll vouch for it too, excellent stuff. ezQuake has all sorts of nice options, and nQuake includes improved textures and models. Not “improved”, mind you, but for the most part truly improved, in the spirit of the originals.

And you can get widescreen support in ezQuake by fiddling with quake/ezquake/configs/config.cfg as per http://wiki.qwdrama.com/Widescreen_Guide

However, I’m dubious about how useful it is in general with singleplayer Quake mods, since it is QuakeWorld-based. And in particular for these maps that need high entity limits etc., it’s not going to work. So I use other engines for non-vanilla singleplayer.

Currently I’ve actually moved all the nQuake files to my Steam installation of Quake, and replaced Steam’s original glqwcl.exe with a renamed ezQuake-gl.exe. Similarly replaced their Glquake.exe and Winquake.exe with the glquakebjp versions. Happy times!

For single player, I’ve always been more of a Q2 kinda guy (played it through 8-10 times at the very least) - but as much as I love The Edge from a level design perspective, The Abandoned Base is just simply where. it’s. at. A mate of mine made a ripped down version of winquake that had only dm3 and nothing else - but it fit on a single damn floppy. Used to play the shit out of that… good times, good times.

For single player, I’ve always been more of a Q2 kinda guy (played it through 8-10 times at the very least) - but as much as I love The Edge from a level design perspective, The Abandoned Base is just simply where. it’s. at. A mate of mine made a ripped down version of winquake that had only dm3 and nothing else - but it fit on a single damn floppy. Used to play the shit out of that… good times, good times.

You know who designed that level, don’t you?

I know HRose has already said he prefers this renderer, but I do recommend checking out nQuake if you’ve not kept up with the client development. It’s seriously impressive!

Yeah, it’s impressive how nQuake is everything but ergonomic (the menus, oh my me). Plus, we tried to set up a basic LAN on it, it did not work while every other game did.

I use the FitzQuake client for my Quaking needs (I’m on a Mac at home so my options are limited - FitzQuake saved my ass there). It can be configured to look exactly like the software renderer (chunky pixels, etc) but it supports newer maps with higher limits.

I’ve been really getting (back) into the original Quake over the last year or so. Such a fun engine to play around with.

Okay, this is fucked up.

You know who designed that level, don’t you?

No, I had to look it up. Can’t say I’m surprised, though.

I’ve been fiddling with Quake renders and options because Dusk dev posted an analysis of the first game level on twitter, and I noticed those screenshots looked better than any version of Quake I’ve seen (need to maximize the original picture to appreciate).

The first doors we come across are these guys, which wonder of wonders OPEN SIDEWAYS. Not just that, but they also have these odd not-rectangle shapes that--once again--would not have been possible in vanilla Doom. https://t.co/CqB4N0PVg6 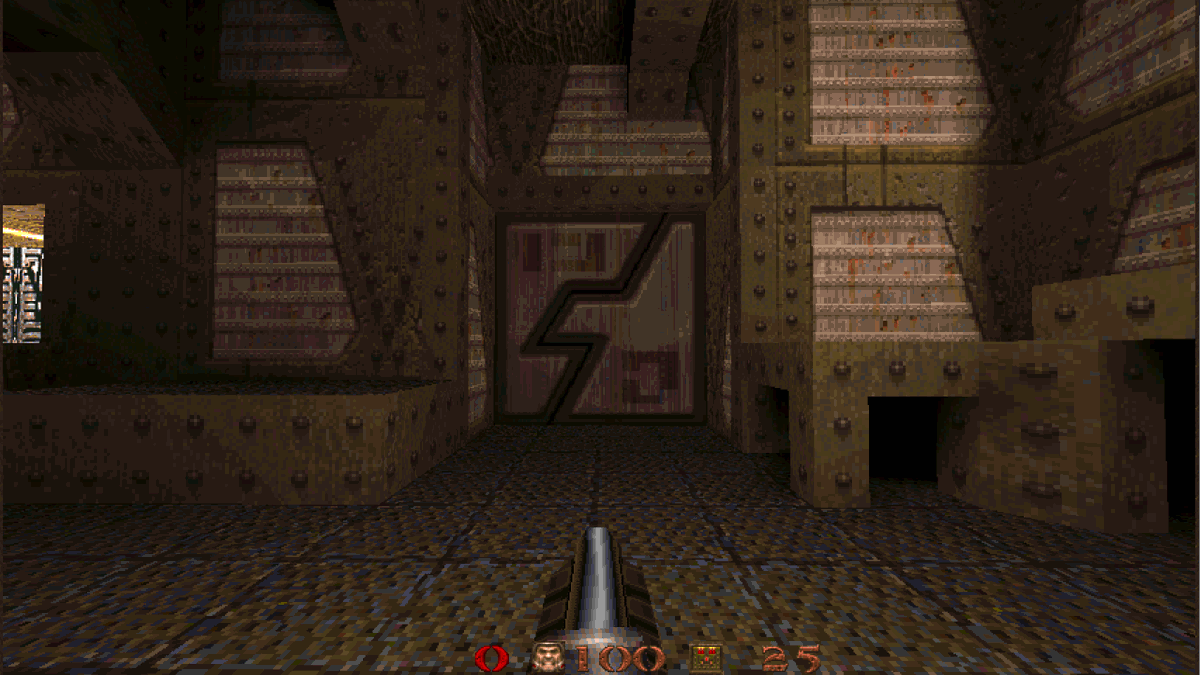 I’ve booted my own Quakespasm and instead I got a greenish-tinted ugly picture. 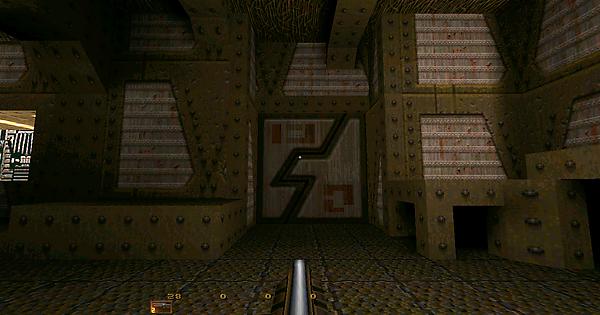 The Dusk picture has a much warmer tint, and the lighting is rendered in a different way (see the door).

Turns out the warm and super rough pixelated version is from the software render, that none of the modern engines manage to quite match. I got pretty close to something that looks great using Quakespasm and then setting it up to 16bit (only works in full screen, as it switches the whole desktop).

And then I loaded up a bunch more SweetFX effects.

But that’s not the point. Because I ended up going in a different direction, and so I dug out this old thread, as I wanted to share these fancy screens. I absolutely love the way this looks. It’s amazing. 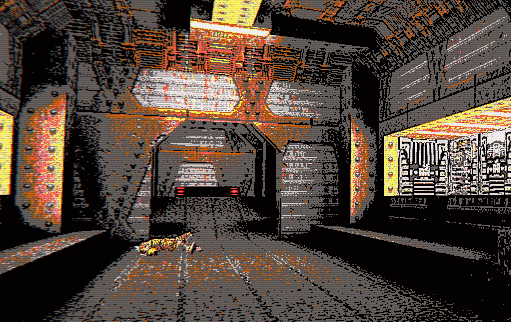 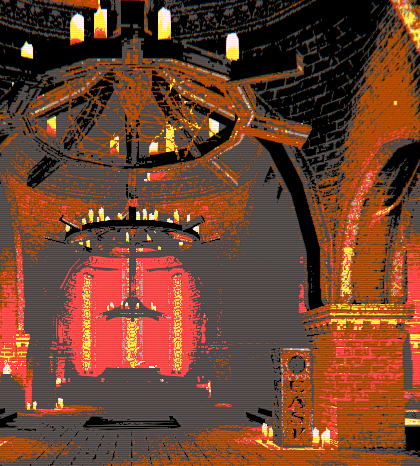 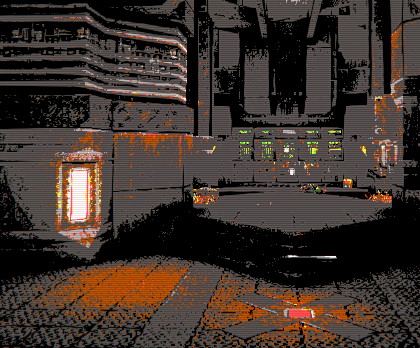 Original versions (they only look great uncompressed at original size, though): 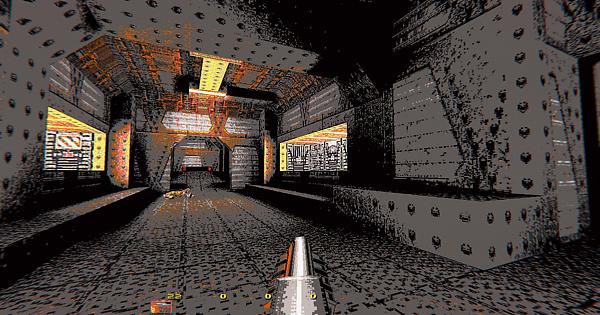 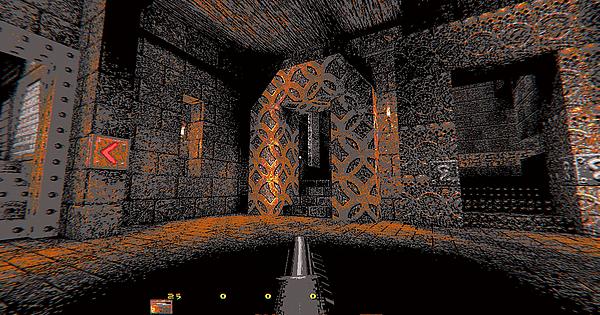 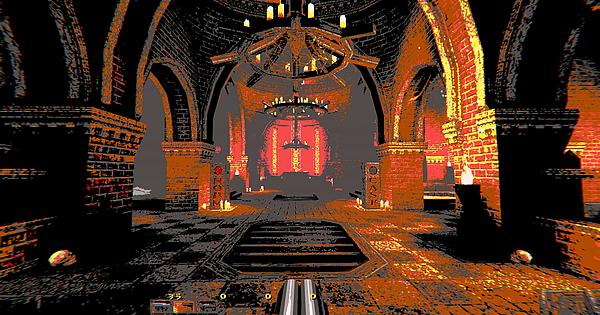 I guess it reminds me of one of those cga games of 4 colors palette?

I was going to necro an old thread but the search function on this forum is broken.

Just like I explained on my blog last march, please use the google sitesearch under the main search dropdown, added today. It should return results instantly.

This exchange is golden.

I’ve been a dick for well over a decade.

Yeah those screens look terrible vs if they were native.

I suppose you probably won’t like the other game a Dusk dev is making:

I absolutely adore low palette / dithering stuff. Or even the look of Return of the Obra Dinn. I guess in that case it’s less jarring because of 1bit palette.

For me that sort of chiaroscuro effect with flashes of colors looks amazing. I keep going through classic Quake levels I’ve seen a thousand of times in awe.

Does not work for me, but to each their own!

A few more (scaled down they don’t look the same): 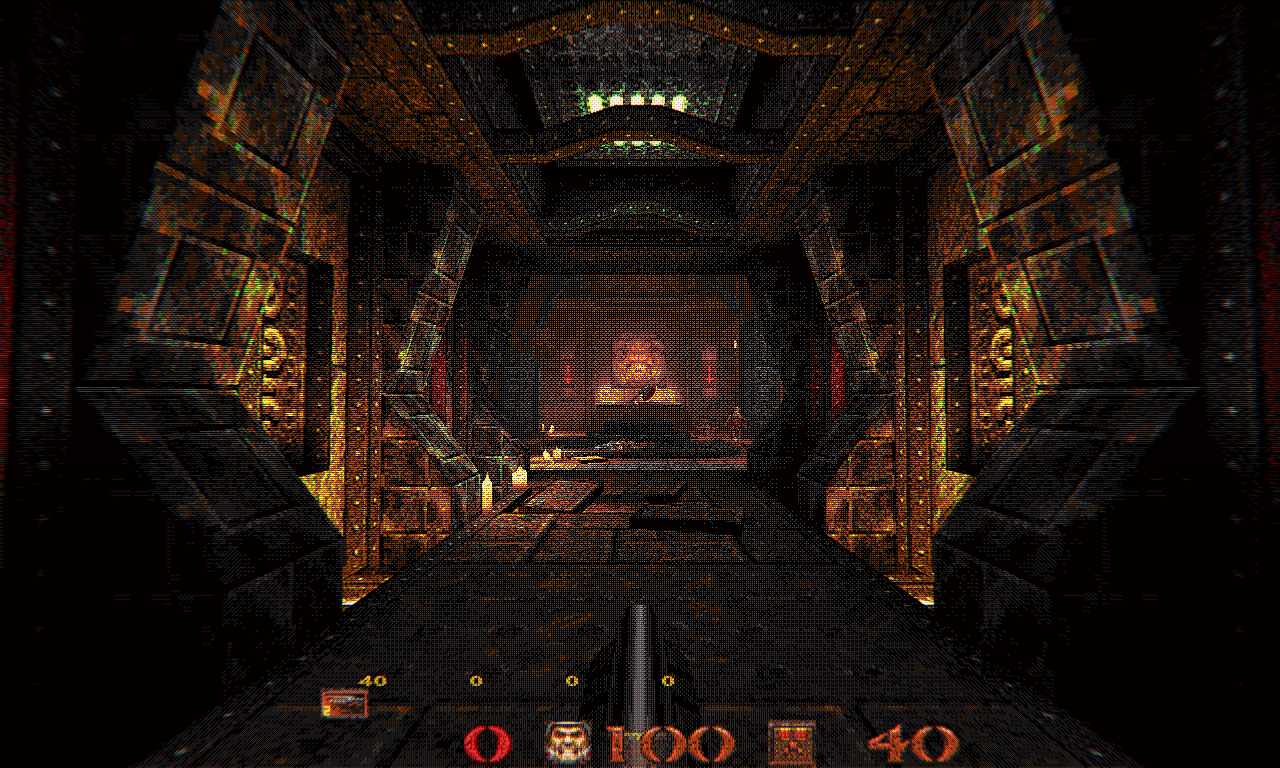 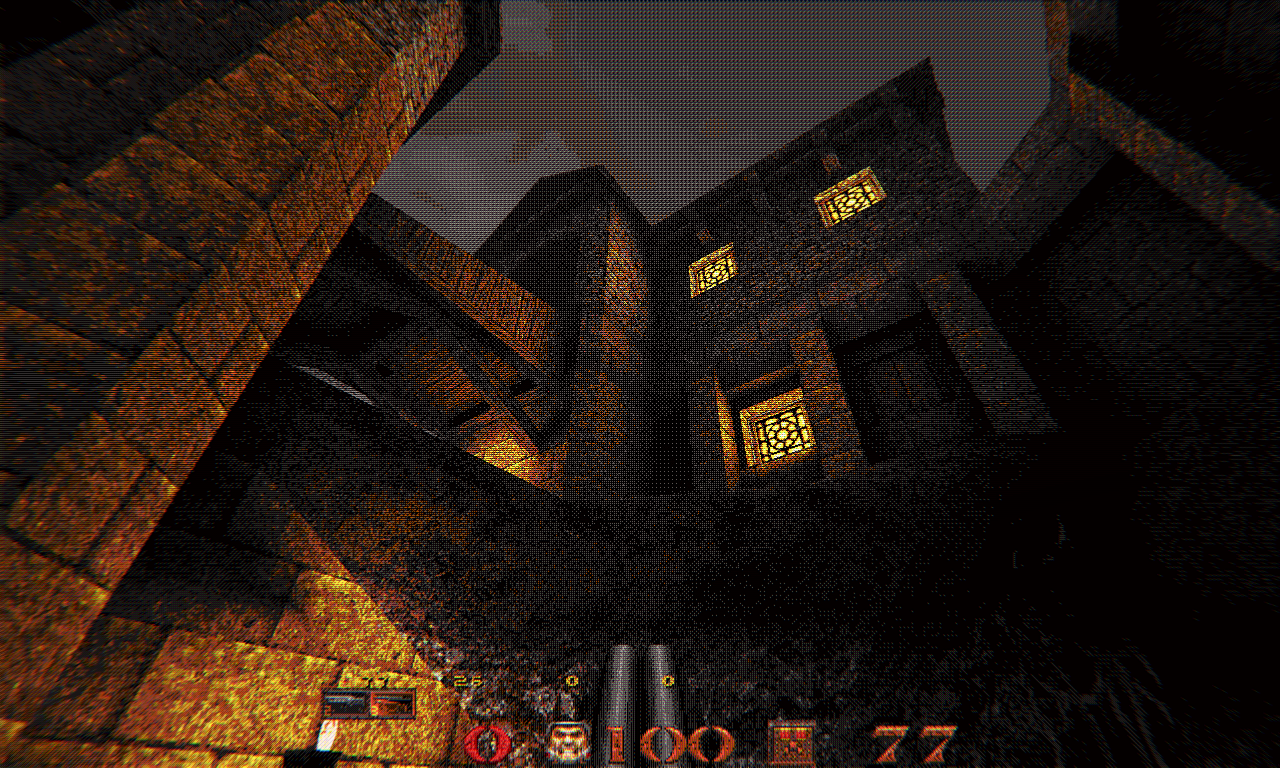 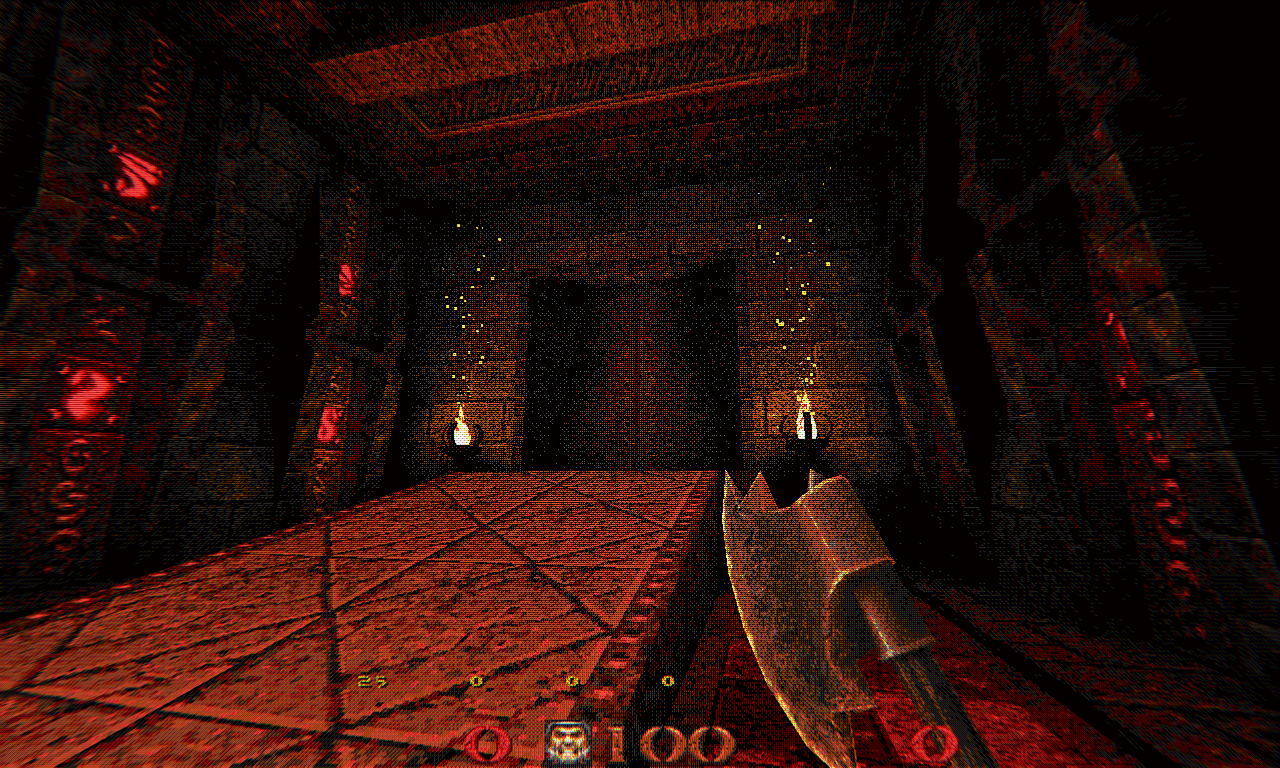 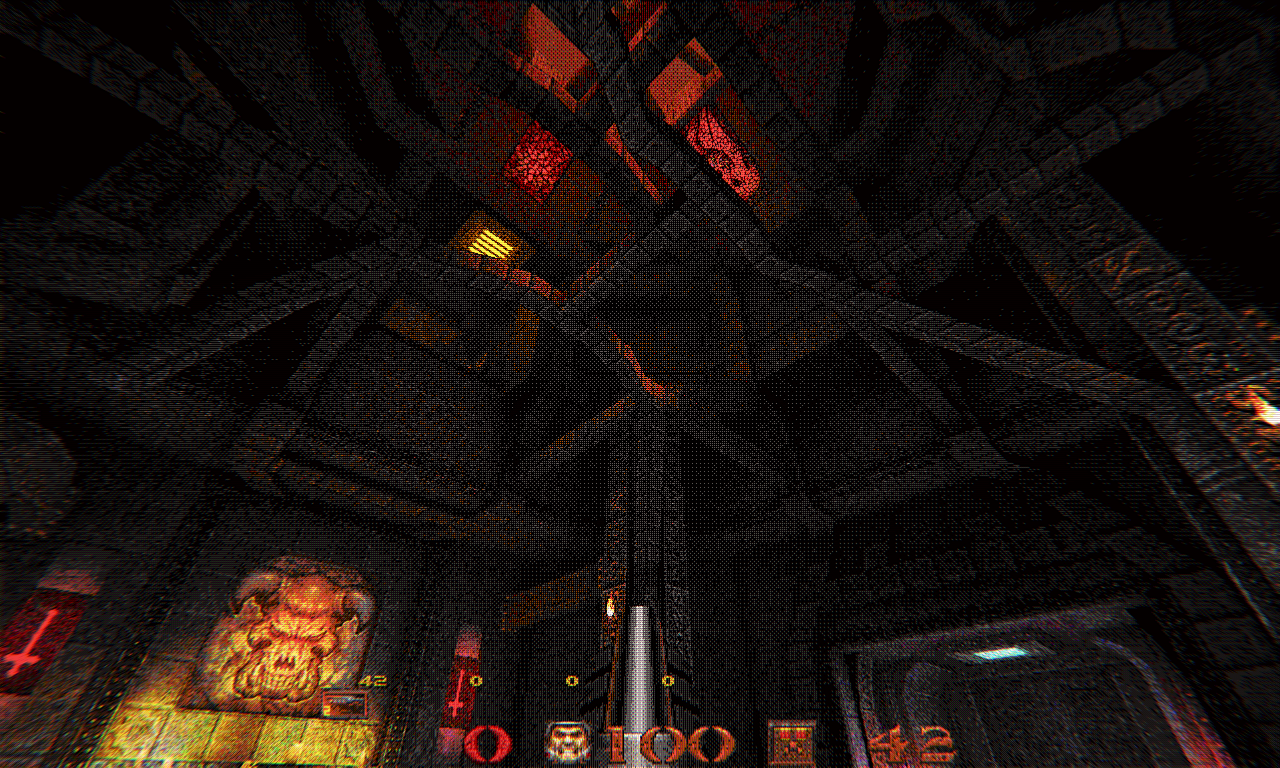 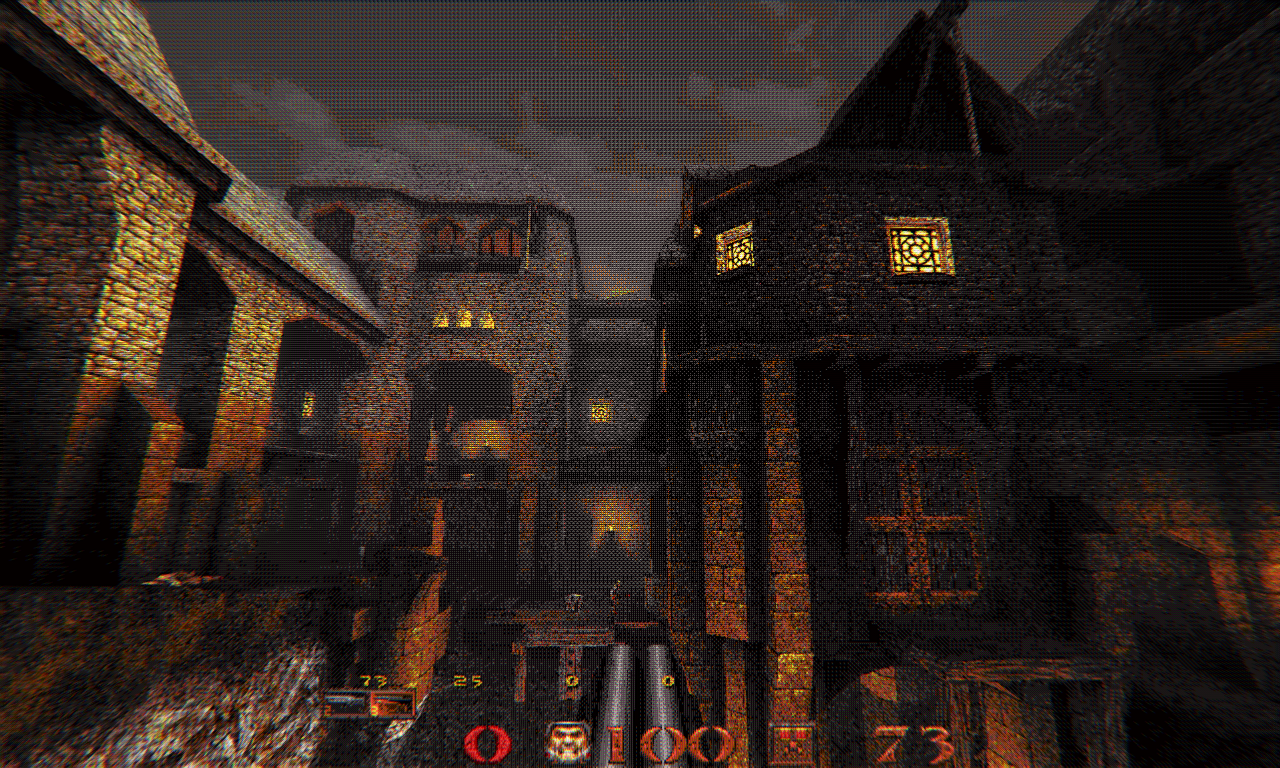 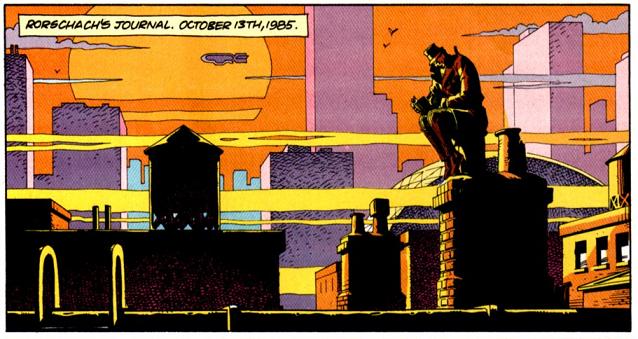 In miniature images it looks kinda cool, but when I click on them the dithering assault my eyes :(

Since the thread started in 2008 with that map, here’s a couple new ones! 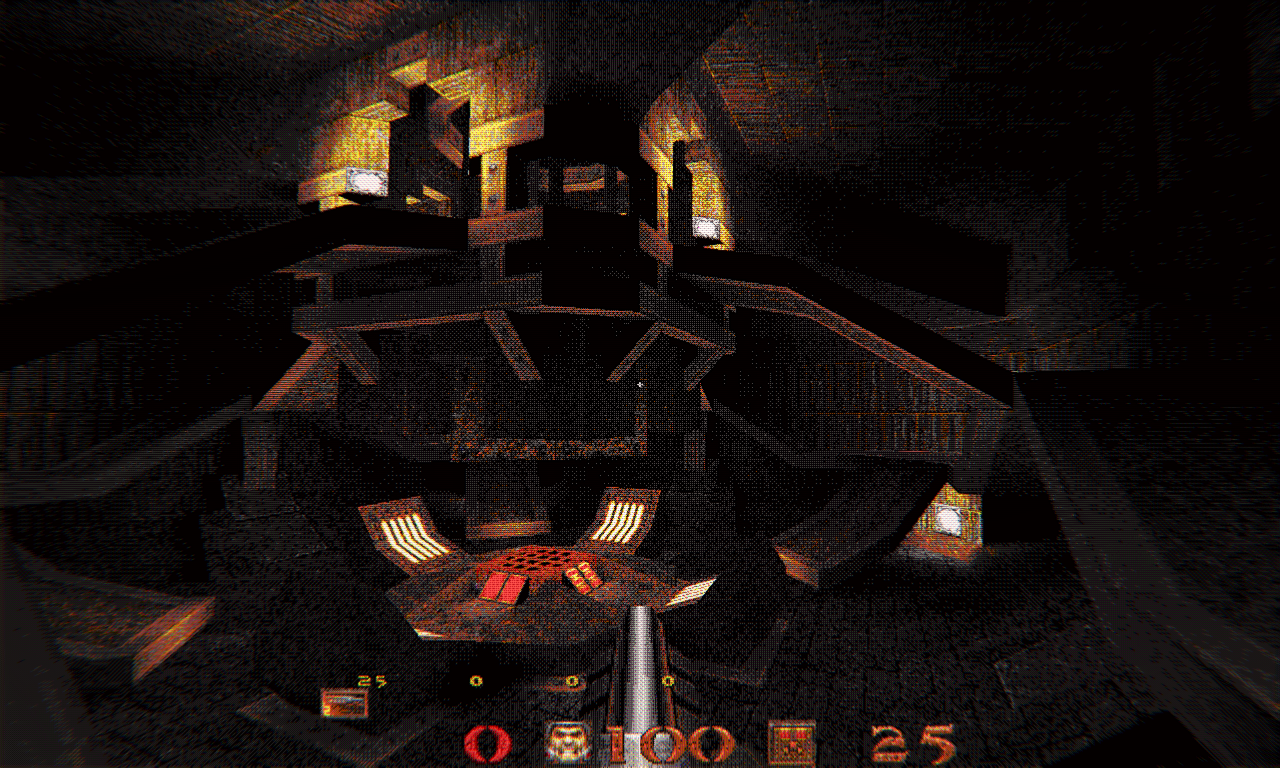 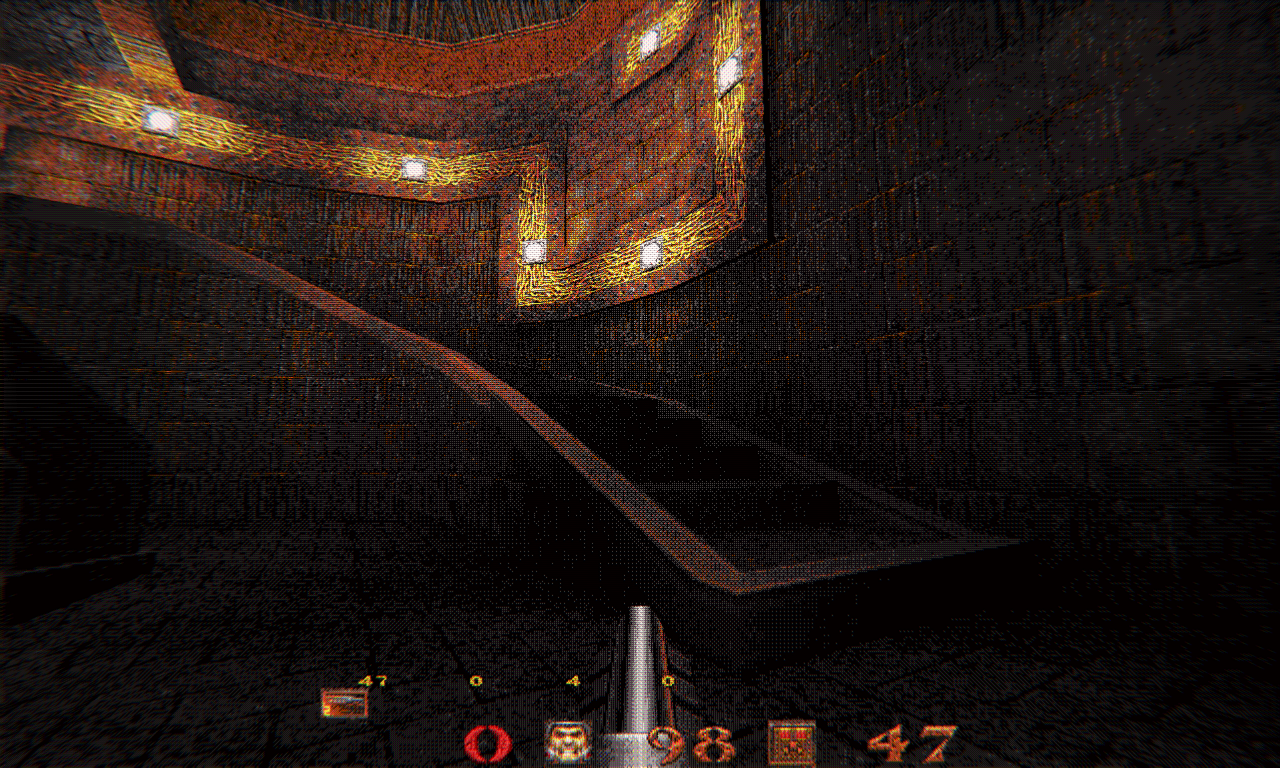 These are actually great rescaled:

My Eset AV wouldnt let me in to that triptohell site. Potentially dangerous content.