@Jason_McMaster are you back from CA to show us how the new expansion works tonight?

One Big Problem. Rim Fridge Does not work with 1.1 yet and I seriously don’t think I can play the game without it. Call me spoiled. I hope it gets updated quickly. There seem to be some posts asking for it on the workshop page but the author hasn’t responded. I don’t think I can go back to storing all my food on the ground :)

I see what you did there.

I just got a mission to help a defector, and in return he will reveal the location of an outpost to steal psi tech and research it outside the Empire. Obviusly it makes them hostile.

It also added a bunch of fun quests, i like it so far.

DO you get missions early on? I’ve never gotten so far in Rimworld that I was ever able to take on a mission… maybe I just like the early-mid game too much but I always seem to start new games before reaching a point where my colony is strong enough to do missions

You get missions all the time now even in the first few days, some are easy some are tough.

I just got a mission that i had to babysit 2 people for 5 days and keep their happiness above 20%, you control them during that time (easy right?) so the game decided to throw a plague at me that ended up killing the 2 visitors and infecting 5 out of 7 of my colonists (2 died).

I also got raided in the meantime. Fun fun!

Tynan with an update on his blog

Later updates
We will be updating the game further after the content add-on. While the content add-on will stay on version 1.1 and generally not break mods, there will a version 1.2 some day, nd it will have more breaking changes. We’re going to try hard to avoid unnecessary code breakages and keep documents about changes for all future updates, and without such a big Unity update I hope mods in general will be easier or trivially easy to update than the 1.0 -> 1.1 shift. However, things will still inevitably need updating.

Sharing that point specifically. For a long time, Tynan made it sound like he had lsot interest in Rimworld and was going to focus his efforts on new projects… but the surprise drop of Royalty seems to indicate a newfound focus for the game. Hopefully that means more expansions and DLC!

As far as Royalty goes - I’ve been playing it heavily the past week or so. It is a nice addition, and adds some structure to the quest and faction system. The new quests are generally pretty fun, although the reward balancing is a little off. Sometimes you get something that is as simple as killing a small pack of mad squirrels and you get 2k silver and equipment. Other times you are offered the chance to protect a character for 7 days, with mechanoid drops occurring every 18 hours in the span… and your reward is like 200 silver and some royal favor.

Still, it is a really fun update! Excited that the game is going to be getting attention for the near future.

Awesome game, having lots of fun with it.

Hopefully more mods will be updated, tons have already so I am able to build toilets 👍

I’ve got a new colony going myself after picking up the DLC. So far I’ve got a bit of a love/hate with it, but the base game I’m still madly in love with.

Just fired up Rimworld for another go, using the rich explorer start. Named the pawn Ivan and gave him a pet warg. Managed to get a cozy little cabin up before winter while dodging most of the early game crises. Then, while the warg and Ivan were asleep in the bedroom, I got a message about the pet warg going feral due to a lack of training. I had never seen that message before. The warg immediately killed Ivan, then chilled in the cabin feeding on his corpse for the rest of the winter. Eventually, a raider knocked down the door and the warg escaped.

It’s a good spot for a base and most of the basic infrastructure is still repairable. I might let the game run and see if a random event gives me new pawns. Anyone else seen that happen?

I’ve let it run after launching my colonists … looks like about 10 days to get first replacement, playing on Cassandra Classic/Medium. 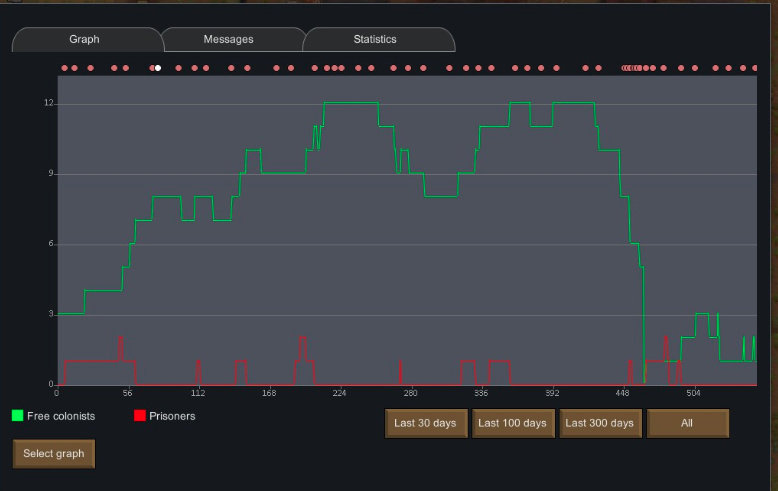 image778×491 65.1 KB
On the wealth graph, the second drop was a fire that destroyed a lot of stuff… I haven’t played in a while, but I remember this playthrough as becoming really difficult because the base was large and with only a few colonists (or esp just one) I couldn’t keep all the things going or my walls intact. 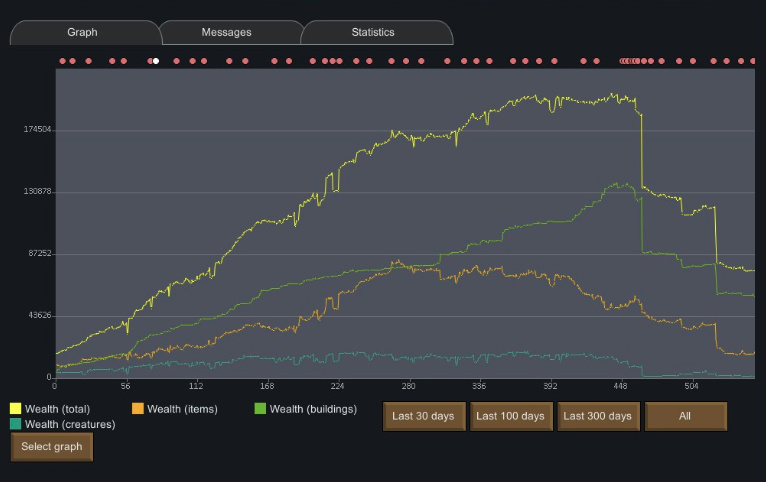 I’ve had a “man in black” show up after a disastrous base defense. I think I lost 4 of 6 colonists, 1 of the 2 survivors was severely wounded, and both were having nervous breakdowns. He showed up about 3 days after the battle and basically saved the colony. It was pretty cool.

I keep getting interested in starting a new game, but have been waiting for the mods to update. Last time I ran it, some mod-related conflict issue stopped me from actually starting the game :-\

Yeah, the Man in Black is awesome. One of the few videogame moments from the last five-ten years that I really remember going, “Fucking awesome,” when it happened.

Unfortunately, the man in black didn’t show up to save Ivan from his warg.

I don’t really want to restart and go through the early game again, so I might just leave it running later and see if anyone shows up.

What mods are essential to make the gameplay experience less of a slog?

I know for this game in particular this answer will sound bizarre, but I’ve played this going on 300 hours so far and have yet to use any mods.

What mods are essential to make the gameplay experience less of a slog?

There are lots of others that aren’t essential but fun
Simple Sidearms
More traits
XXL stacks
Rimsenal
Dinosaria
Quality Builder
Real Ruins
The List goes on.

I know for this game in particular this answer will sound bizarre, but I’ve played this going on 300 hours so far and have yet to use any mods.

I don’t think that’s so strange. I did my first 100 hour play through without mods, and didn’t really find anything missing.

When I looked at available mods, most of them seemed to add toilets and stuff that I really don’t need added to the game. I didn’t see a ton of stuff that was purely UI improvements or similar quality of life stuff (I really usually don’t like mods that alter the gameplay, substance of the game, or difficulty).