Soon, anyway. Everyone knew they were on their way out, but this seems to be a fast train to Chapter 7. 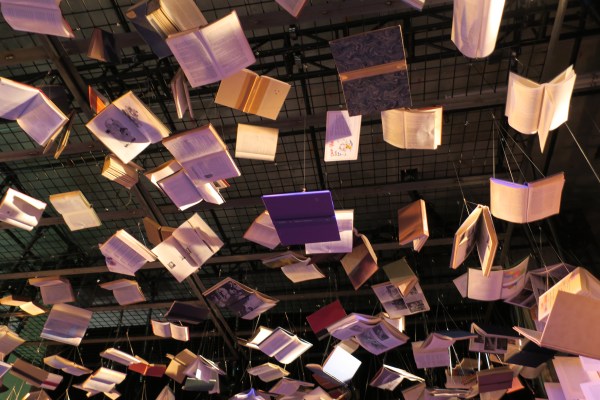 Barnes & Noble is killing itself

I’ve been chronicling the slow demise of B&N for years now, watching the company bleed out, drop by drop, until it has become a shell of its former value. B&N was a cultural center in places without cultural centers. It was a stopover on rainy days...

Soon a large number of Americans will only be able to buy books online, mainly from Amazon.

I really hope that’s not the case. I visit the store multiple times in a month. I get Retro Gamer and other games magazines there all the time. It’s the only place for them.

Shit. I wonder what my managers will say when I go into work.

I feel like book stores are one business that doesn’t really justify a physical location.

A book is a book for the most part, unless you’re buying some limited edition super collectible book. Even when buying used books, the difference isn’t that huge and if the quality is that bad, if you buy from any major seller, including amazon, you can basically return/exchange it no questions asked.

Stores like B&N have much lower selection and it is harder to find what you want. It is also less (read: not at all) customized. On a site like amazon, if i buy book A, it is going to recommend books B, C, D, etc and a lot of the time, a new book i find is based on a recommendation.

I feel like the days of people going to browse at a book store are dead. These days people just want to find the book they want and maybe other books they want, without all of the bullshit that appealed to previous generations.

Personally, if it is not a textbook style book, i buy it for my kindle. However, if you want to save money, you can pretty easily find most books as used for MUCH cheaper than new on sites like Amazon and Ebay.

I feel like book stores are one business that doesn’t really justify a physical location.

Sigh. I have always loved the olfactory and tactile rush of entering a book store. The carpet underfoot, the shelves. The heft of a book in the hand. Sure it’s not as efficient as an Amazon search. But I’ll miss it.

There was a large book chain in Australia called Borders, which I believe originated in the U.S.

The stores were all very large and very comfortable. Large arrays of books, places to sit and read, tables, nooks and crannies, cafes, and so on. You could tell people enjoyed the store as there were often many people in there. Yet, noone actually bought books there, and it eventually failed. People liked to browse, read parts of books on leather seats, pass the time, and then buy the books that interested them cheaper online.

It’s a classic free riding problem. I imagine there were many people who were sad to see Borders shut down as they got value over it existing, yet noone actually wanted to be the one to buy a book there.

The ax already fell in our local B&N. My wife had friends there and they all got canned on Friday. Among the casualties was the back room receiving manager, the lead cashier, and the lead setter.

Well maybe this will finally motivate some kind of antitrust activity against Amazon, now that they have what rounds off to 100% market share in the US. The entire industry is toxic now.

As much as I love libraries, there’s way too much stuff I read that my local libraries aren’t going to stock for one reason or another and that I would have been able to find at local bookstores if we still had them. Libraries are utterly useless for graphic novels and manga in a lot of places, for example, and many libraries that do stock them only carry YA-friendly stuff because of the ancient stigma about comics being for kids.

I find this sad as well. I agree wholeheartedly that Amazon or other online buying is the most efficient and practical way to buy most books. Nearly all of my fiction, for instance, is in electronic format these days, straight from Amazon to the Kindle or Kindle app. I haven’t browsed seriously for fiction in a physical store in ages. But I do love bookstores, for the reasons RichVR notes, and for non-fiction stuff like history books, I really, really prefer dead trees to digital, especially on my old school Kindle Paperwhite or my phone, where I read most of my fiction. Nothing is quite as good as paper for maps and stuff, unless the book is somehow fully optimized as a digital product, and then, I find reading large quantities of academic text in digital format fatiguing in a way I don’t find it so with fiction for some reason.

But, and this is why I’m not at all surprised that B&M stores are dying, the non-fiction I am likely to buy is so specialized that no physical store can stock the variety of stuff I want. It’s purely a crap shoot at our local Barnes & Noble if they have anything on the shelves that is what I want when I’m in the market for some history. In fact, I usually just research it in various places and then get it online, because I can get exactly what I want, and the stuff I get is pretty particular.

I do agree too with the idea that these big stores were pretty much guaranteed to lose money. I love the atmosphere, and the comfy chairs, and the browsing, but man, that costs a lot to maintain for the small volume of sales of books they seem to have. The B&N here seems to sell far more non-book stuff than anything else, which ultimately takes away from the atmosphere anyhow.

I was never really clear why it was Apple that got hit with anti-competitive lawsuits by publishers while charging more than Amazon for the same title.

I do buy a few things from the Apple bookstore, here and there.

B&N near me has been the toy store par excellence for the last couple of years, all high quality board games and Lego architecture. They also carry local authors and specialist literature for the area that, admittedly, probably has at best a narrow audience.

However mixed use stores are drying up as well. Hastings, a regional mixed-use retailer that sold CDs, books, music, rented videos and even eventually moved into video games - and was often the only place in a smaller town ~ 30,000 or so to get them - went bankrupt in 2016. Best Buy recently announced it was dumping CD sales (finally).

Best Buy is in many areas the last and only place to buy a TV outside of Walmart or Target. To some extent, default is the best fault to have for a retailer like Best Buy that has the opportunity to sell expensive electronics. Barnes and Noble just doesn’t have a high margin, expense product it can easily pivot toward. You would think that being the last place to buy books locally would profoundly benefit B&N. Honestly, living in a town of 120,000… i don’t know of anywhere else i could go to buy a magazine or book. In fact if B&N closed nationwide it’s likely i’d have to drive 5 hours to reach an independent book store. Grocery store faire is all that’s left. Have all “readers” moved to eink/digital now?

Because Apple colluded with the publishers. Amazon was selling ebooks at $9.99, and the publishers hated that. When Apple came along, they colluded with Apple to set the minimum price of ebooks at above $9.99 in a move that was designed to force Amazon to play along. It was clearly anti-competitive, and all the publishers came clean and settled with the DOJ. It was only Apple who kept fighting (and losing) in court and in the following appeals.

Also, a Reddit thread on why it didn’t have to be this way for B&N.

r/books - If the decline of Barnes and Nobel depresses you, check out...

I use my library almost exclusively for digital, audio and (rarely now) paper books. But I am running out of mainly SF and Fantasy stuff that I like, and then need to resort to Amazon to fill in the gaps. My library doesn’t support the Nook, so I don’t own one even though I work at B&N.

I can’t tell you how much I agree with this. I just moved into an apartment that’s 2 blocks away from the Ballard branch of the Seattle library and it’s been wonderful. There are boardgame nights on some Sundays! Wonderful.

Well maybe this will finally motivate some kind of antitrust activity against Amazon, now that they have what rounds off to 100% market share in the US. The entire industry is toxic now.

Offering a better service at a better price is not illegal, even if you end up with a monopoly.

Wonder how much B&N sunk into their Nook e-reader that served no purpose, and how much that thing hastened this eventuality.

Oh, and just to make this thread actually belong in P&R: Trump sucks.

TechCrunch just reposted this (very interesting) article from a longtime employee. I’d read that instead. “Whether the Andrea Gail rolls, pitch-poles, or gets driven down, she winds up, one way or another, in a position from which she cannot recover. Among marine architects this is known as the...

Well, that left me feeling shitty this morning.