Honestly I have very little to say as I know very little about him. He was portrayed as a sort of villain in Private Parts, I think. I assume he and Howard Stern didn’t really get along. I remember when his comment about women’s college basketball players got him in hot water. (I recall the comment but won’t quote it, because what’s the point?) His eyebrows were pretty crazy. Occasionally flipping channels circa 1999-2000 I would stumble on the TV airing of his show (MSNBC, I think?) and note how sour and misanthropic he seemed to be.

I’ve never really gotten the appeal of that sort of talk radio.

He was a divisive figure for sure. But I’d rather consider his charity work and say RIP man.

Never heard of him, but I saw he was trending on Twitter. Some of the Tweets about this man portray him as pretty despicable, if true.

You may know him best from his remarkable WH correspondent’s dinner address which is from a time when…you were not supposed to do this. https://www.youtube.com/watch?v=-JMj8TThD50

I know him best from basically showing his ass and being a racist. I won’t speak ill of the dead, however so … yeah.

But in this case…

"My concern ... is not that people are sorry that they say these things, they are sorry that someone catches them.” In 2007, Gwen Ifill appeared on @MeetThePress, with Tim Russert, @nytdavidbrooks, @JohnJHarwood and @Eugene_Robinson, to discuss Don Imus: youtu.be/vuz34bRylNU. 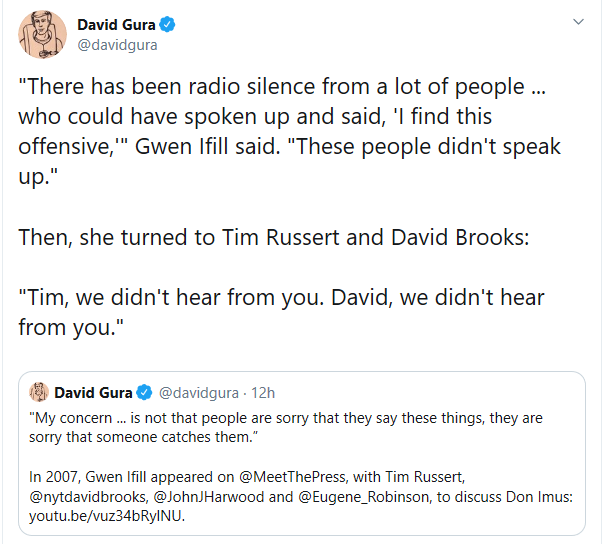 But in this case…

He was a human being with many aspects to him. Nobody is flawless and frankly I find some of the most despicable people to be the very ones attacking and judging others for a living on social media.

You may know him best from his remarkable WH correspondent’s dinner address which is from a time when…you were not supposed to do this. https://www.youtube.com/watch?v=-JMj8TThD50

This is amazing. Love all the awkward cuts to people not laughing, especially the Clintons at the beginning.

I don’t have a dog in this race.

Good riddance. Need Trump, Guliani et all to join him.

His ranch in particular. Helped my cousin so much personally, and others with blood diseases. A wonderful gift and a contribution that changes kids lives.

Also remember that while he may not have been a nice human being, he single-handedly changed an entire industry. Not many people can say that.

What the world clearly lacked was a way to megaphone white men and their racist, sexist, and screw you attitudes. Shock Jocks is basically a hall of fame for white men who can weaponize their cruelty, base judgments of others, and vulgar bullying and still keep their jobs… some of the time. It’s so normalized now that the word shock should just be removed, but the main purveyors of the material… remains very much the same.

Everyone’s getting so worked up. Don Imus died in 2007, right?

“Watching people’s Don Imus tweets is a reminder that for so many white Americans, racism is an incidental side issue.”

“Watching people’s Don Imus tweets is a reminder that for so many white Americans, racism is an incidental side-issue that says nothing about someone you like’s character but rather is just an unfortunate opinion to be overlooked and not rudely dwelled upon,” Jones tweeted.