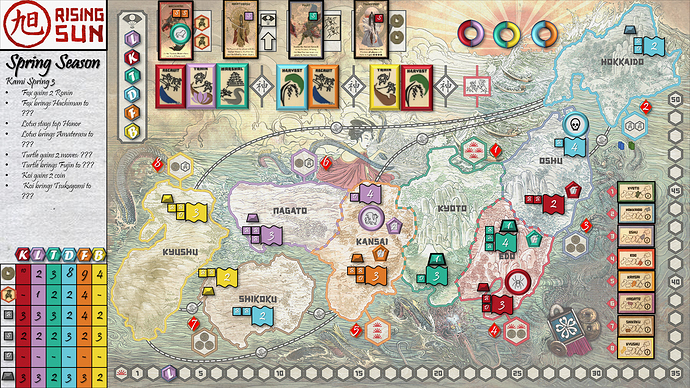 Koi breaks the status table with two digits of coins.

Last placement and use of Kami powers before the War Phase. Be mindful of the impact they have on the battle in their province.

No move for me.

Fujin was already in Edo-- just to confirm.

We now enter the Pre-War phase for Spring. 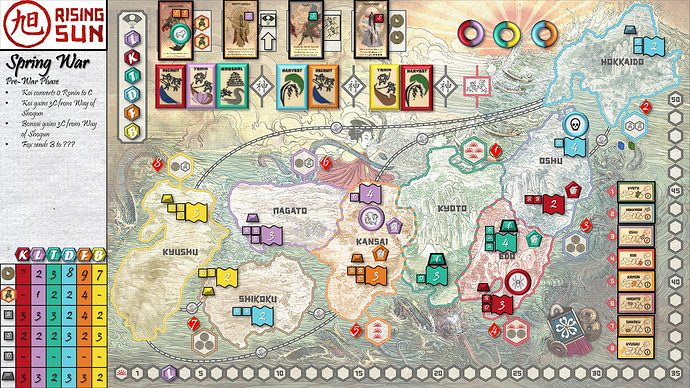 Some cash payouts from Way of the Shogun, and Koi had no Ronin to convert to coins.

It is now Fox’s turn to shine. The Fox clan special ability allows them to place one Bushi in any Province where they have no Force. So @Mike_Cathcart, you have 4 Bushi in reserve right now. Where do you wish them to appear? (Note that this is not a Summon for purposes of other card abilities.)

While he is deciding, here is another view of the War dispositions. 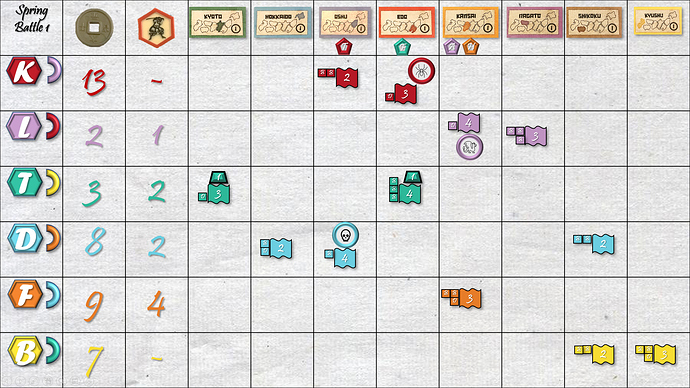 Pretty sure I have 5, as my last summon was a Shinto to Kansai, not a bushi. But if I’m wrong just remove Kyushu from this list:

Sweet baby Kickstarter, you are right. Map’s been wrong for days.

Fixed below, with proper updates: 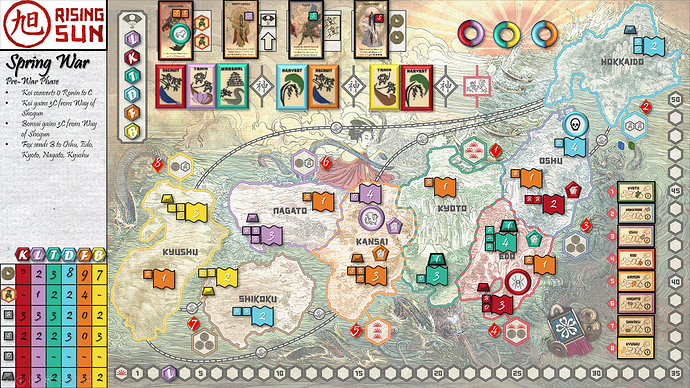 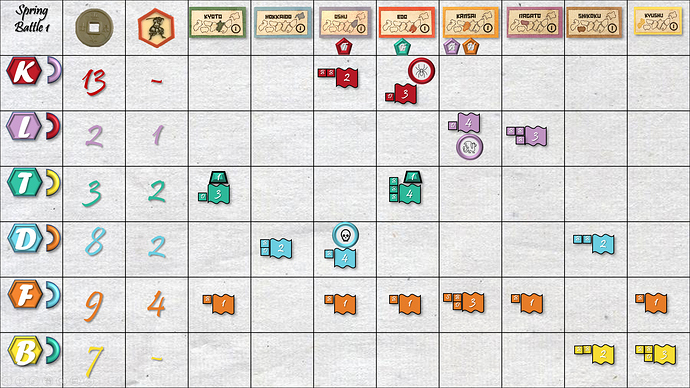 As a reminder for our players, and our audience, the war phase rules.

No more trading of coins or Ronin. You may make promises to each other for next Season, but nothing material changes hands.

Often forgotten rule: all coins and Ronin go away at the end of this war. You should spend everything.

So, in the random province order determined before Spring, we go through each Province. Thanks to Fox’s clan ability, there will be a battle in each Province except Hokkaido; Dragonfly will win the Hokkaido token automatically with no battle phase.

In each province, the players with Force there will secretly and simultaneously make bids with their coins on four War Advantages: Seppuku, Take Hostage, Hire Ronin, and Imperial Poets.

Whichever player wins Seppuku has the option of killing all their own figures in that province, gaining 1 VP and 1 Honor increase for each figure killed. You can win Seppuku and not use it just to prevent other players from doing so.

Whichever player wins Take Hostage may take one figure hostage from any other player in that province (except Daimyos). The hostage does not take part in the battle, the hostage owner must give one VP to the hostage taker, and the hostage will be ransomed at the beginning of next season for 1 free coin to the taker. Yes, monsters (except daimyo monsters) can be taken hostage, so those depending on cool plastic fiends need to protect them during bidding.

Whichever player wins Hire Ronin may then use all their Ronin tokens, if any. Ronin are never killed, so Ronin tokens may be used in every battle in that war. You can win the bid even if you have no Ronin just to keep others from using theirs.

After those three are resolved, forces fight (minus figures who killed themselves or were taken hostage). The clan with the highest force total wins, and all other figures are killed in the battle. You can win with just Ronin. All ties are broken by Honor ranking, so if all clans lose all figures before the fight somehow, the clan with the highest Honor still wins. That clan gains the War Province Token, which is worth VP at end of game, and more based on set collection bonuses too.

Finally, we resolve Imperial Poets. Whoever wins that bid gets 1VP for every figure that was killed in that battle, including Seppuku, regardless of who owned the figure.

At the end of the battle, all the coins spent on bids by the losers are removed. However, all coins spent by the winner will then be divided equally amongst all the losers. You will want to be careful to not overbid in earlier battles so as not to give a later opponent needed cash. 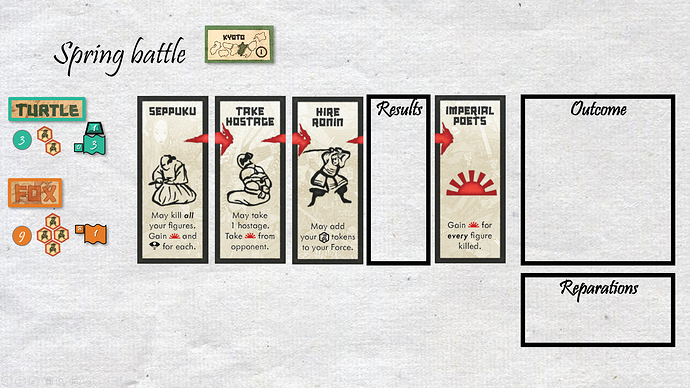 @Ex-SWoo and @Mike_Cathcart, please send me your bids for the four options privately. I’ll run the battle when I have both sets of bids.

Note that Turtle’s Fortress may not Seppuku, be taken Hostage, or die in battle in any way. Turtle’s Force is 3 because his Daimyo is +1 Force due to Path of the Lion. 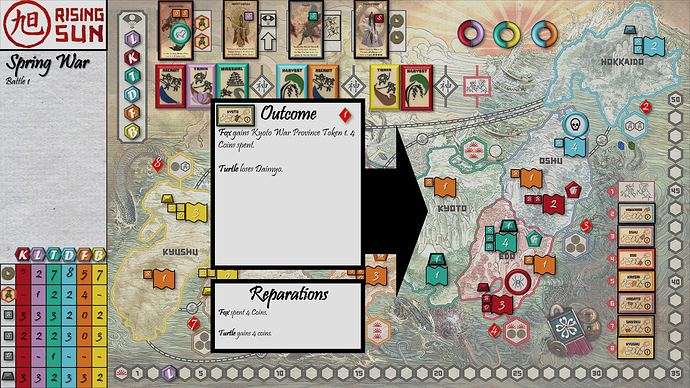 Fox prevails and Turtle loses a Daimyo, but gains 4 coins.

There is no battle for Hokkaido, as Dragonfly is unchallenged there.

Battle is now for Oshu. 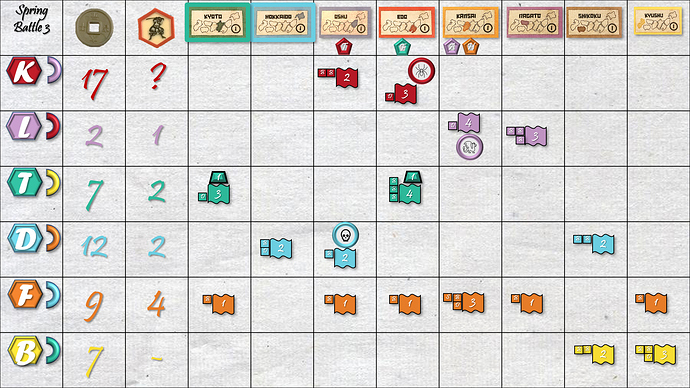 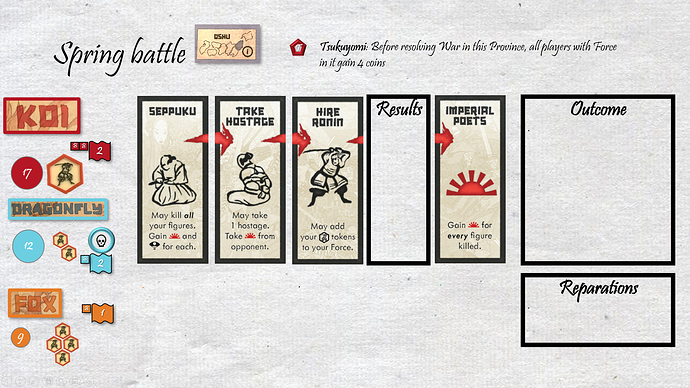 Wow, tough neighborhood over here. Look at this situation with 20/20 vision, I feel like someone should have acted at some point in order to stop Koi from accumulating all the money. This is why we’re having a coin shortage people!

Ok bid sent in. I’ll see you in Shikoku.

Rising Sun is not a game where you can only pay attention to your own actions. Players have to watch each other and cut off overpowered combinations. One of the key traps for newcomers is making deals with your ally that benefit them far more than yourself.

I thought we’d have a mid-round choice, but Koi’s decision does not have a real effect on the battle, but will affect the Summer game plan. 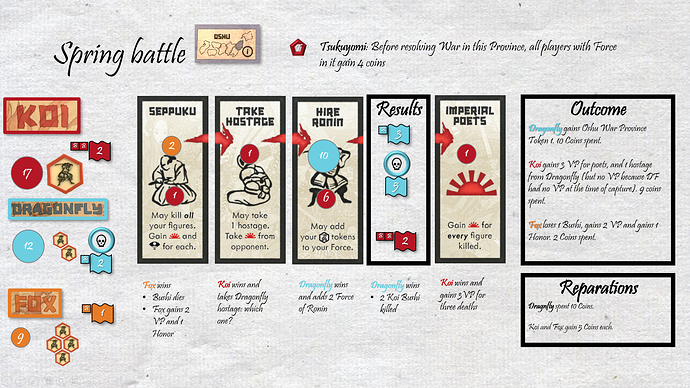 Fox wins Seppuku and does so, killing off his lone Bushi. This gives 2 VP (one for Righteousness) and one Honor step, which means he passes Dragonfly, which means that the Oni of Skulls supercharges back to 3 Force after the Seppuku phase.

Koi wins Take Hostage. Fox is already dead, so Koi must choose to take either the Oni or the Bushi hostage from Dragonfly. It won’t materially affect the outcome, however, because Dragonfly won the Ronin Advantage. So Dragonfly will have either 3 Force or 1 Force, plus 2 Ronin, which outweighs Koi’s 2 Force either way.

The battle kills the two Koi Bushi and gives Dragonfly the WPT.

Koi wins Imperial Poets, though, and winds up with 3 VP.

Big spender Dragonfly gives 5 coins each to Koi and Fox in reparations. 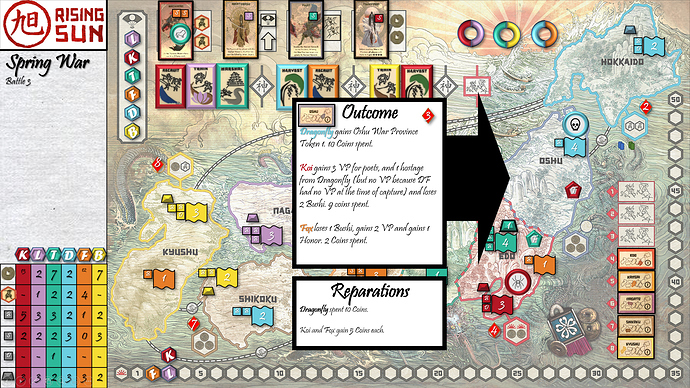 @Thraeg just post to the thread your choice on Bushi hostage or Oni hostage. 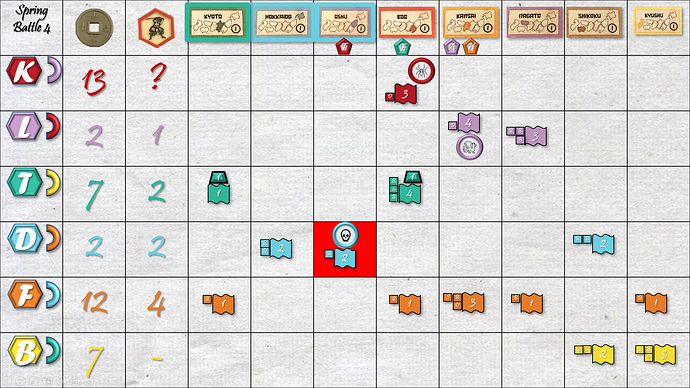 @Thraeg, will you take over Fox’s Bushi, or one of Turtle’s? That Bushi will fight for you until the end of the battle even if Jorogumo is taken hostage or dies. Even if Fox’s only Bushi is controlled, Fox still bids in the battle and can win any of the advantages.

Koi, please post to the thread your decision. There is no bidding until that decision is made. 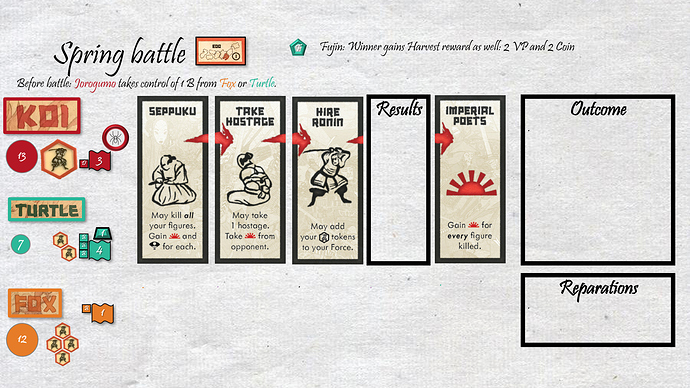 I’ll take the Oni hostage, and then will take Fox’s bushi. 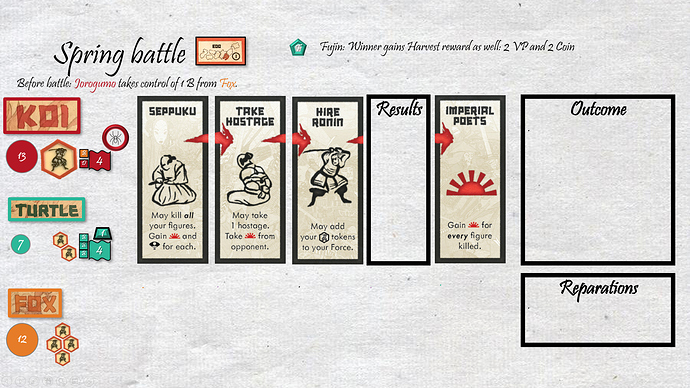 Again we had a hostage choice that does not affect the battle outcome. 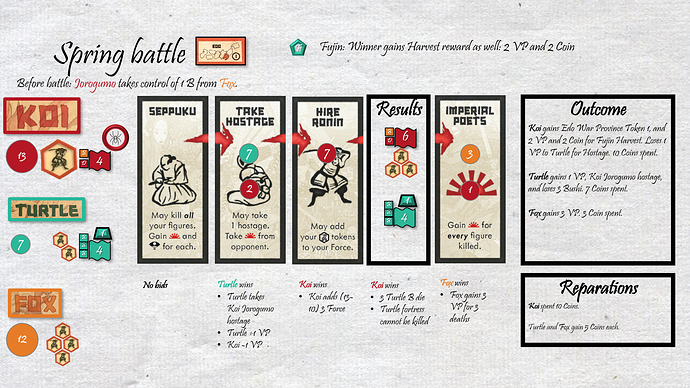 As mentioned before, the Koi monster Jorogumo swapped the loyalty of a Fox Bushi at the beginning of the battle.

No one chooses to Seppuku or to stop others from doing so.

Turtle invests 7 coin into taking a hostage, winning handily. He cannot take the Koi Daimyo hostage, so much choose between the Koi Jorogumo, or the Fox Bushi. He chooses Jorogumo, and takes 1 VP from Koi.

Koi spends just as impressively on Ronin, which no one contested. Koi had 13 coin going in and bid 10, so there are 3 coin remaining to act as Ronin.

For the battle, the Ronin turn the tide, 6 Force to Turtle 4. Three Turtle Bushi die in the slaughter, but the fortress remains intact.

Fox wins the favor of the Imperial Poets, and gains 3 VP from the stanzas composed while his lone Bushi slinks back to the Fox camp.

Koi’s 10 coin spent go equally to Turtle and Fox, and we move on to Kansai. 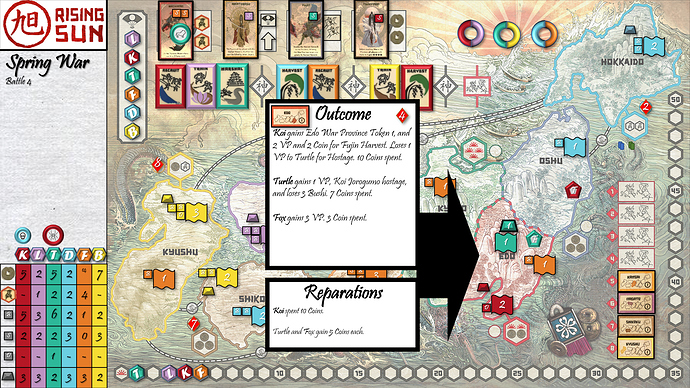