Sure, that’s perfectly reasonable, 2 coins to you if you will Harvest.

Great, thanks. Then I will Harvest.

Path of the Merchant gives Koi and Dragonfly 1 coin each 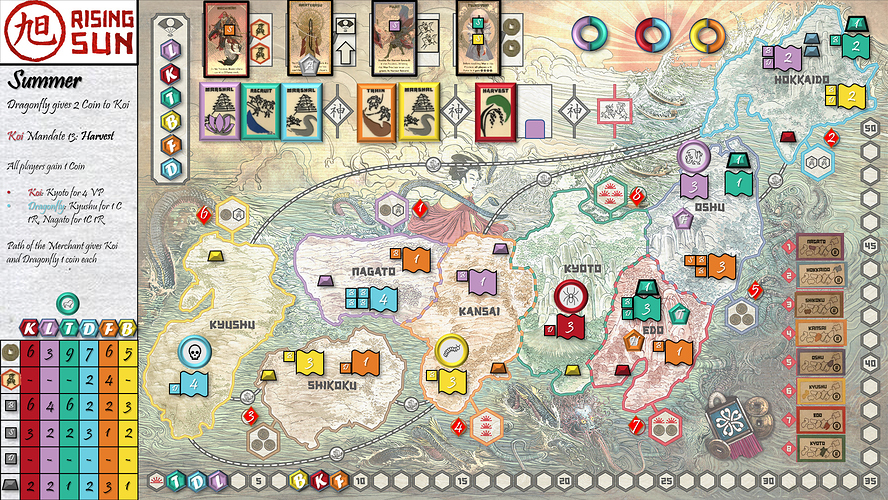 The (largely ceremonial) mandate selections have been sent to Lotus @Juan_Raigada.

After Lotus Mandate, we go to last Kami, and then Summer War Phase.

Path of the Merchant gives Koi and Dragonfly 1 coin each 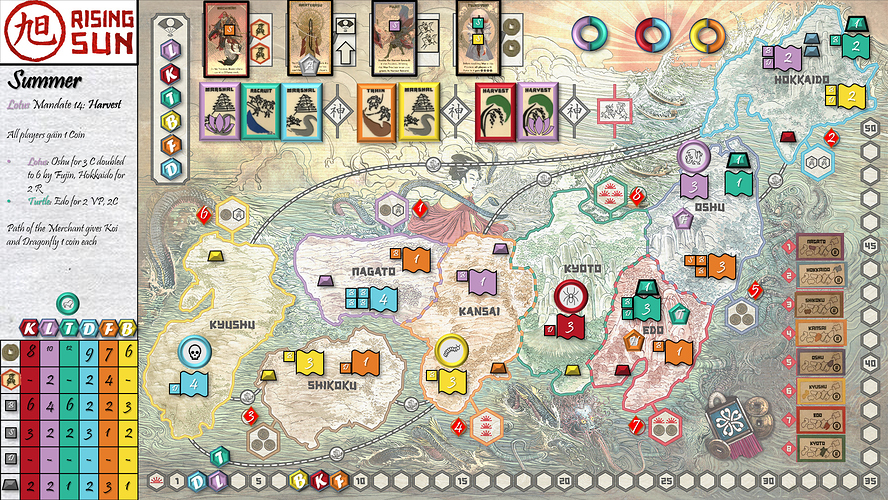 We now enter the last Kami phase of Summer.

Koi and Dragonfly gain 1 C each from WotM 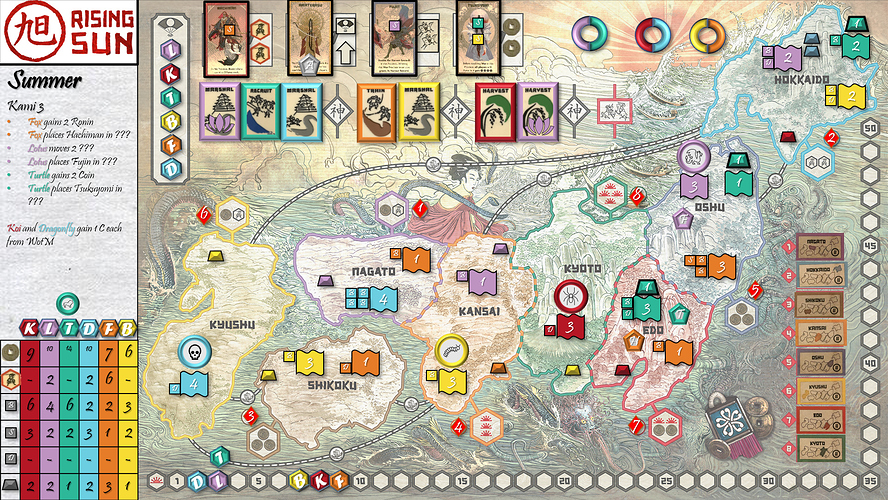 Then we enter the War Phase of Summer. 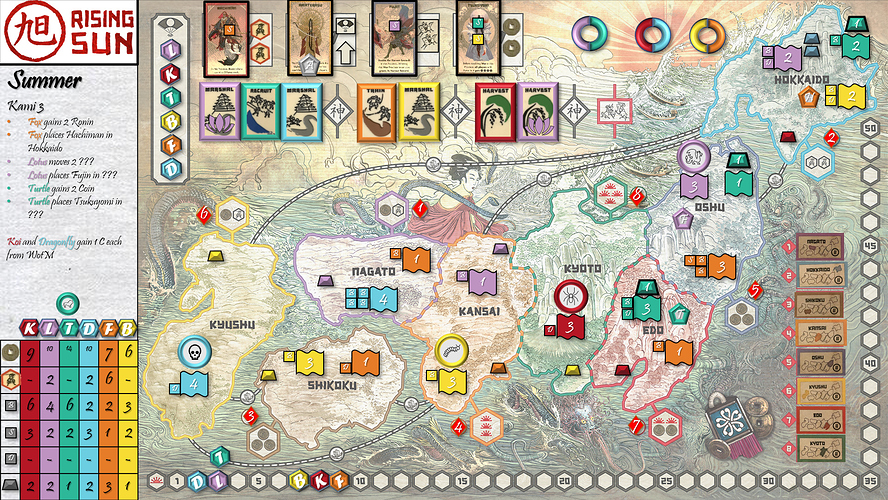 Stay in place in Edo

I also stay in place 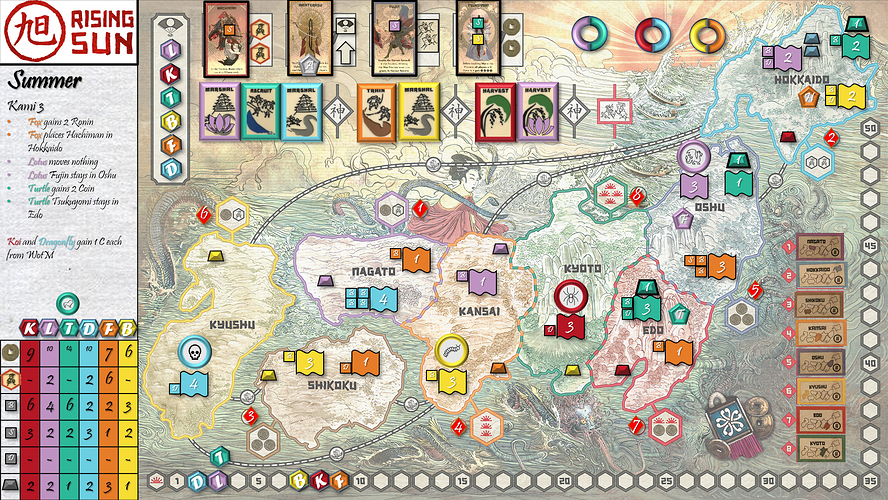 No trigger from Way of Merchant

@Mike_Cathcart, Fox has option of placing up to two Bushi in two Provinces where Fox has no current forces. Once that decision is made, we start war in earnest in Nagato. 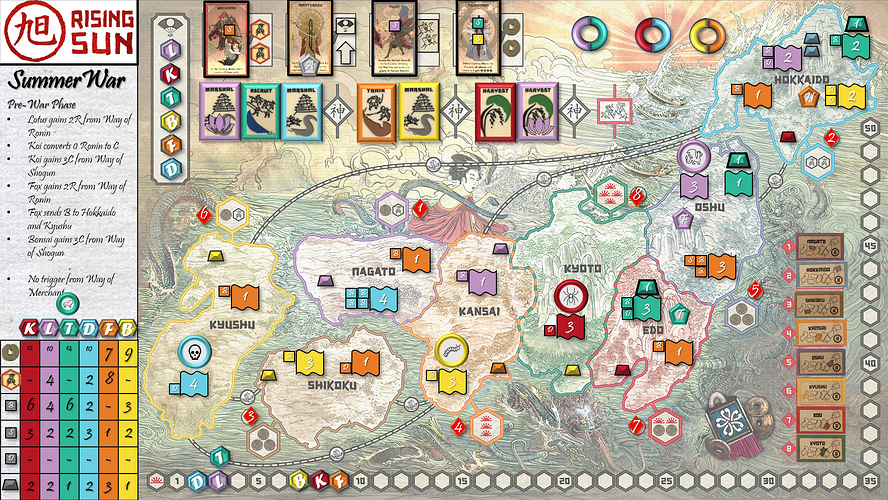 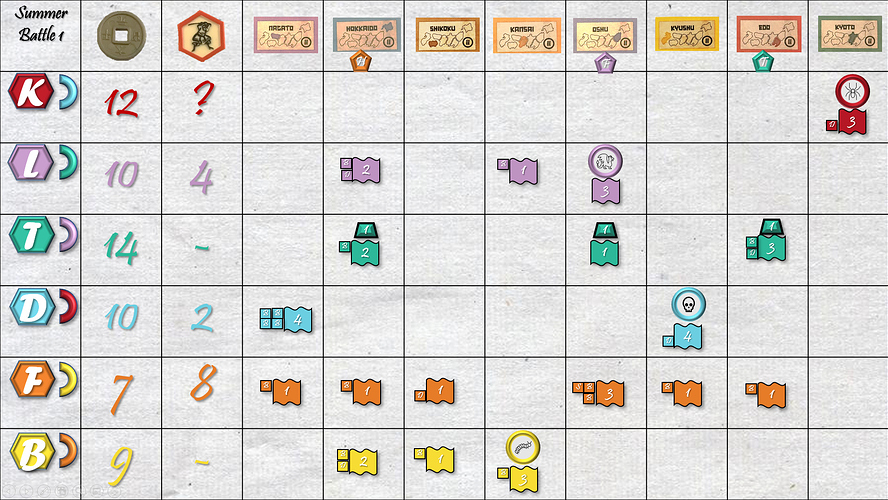 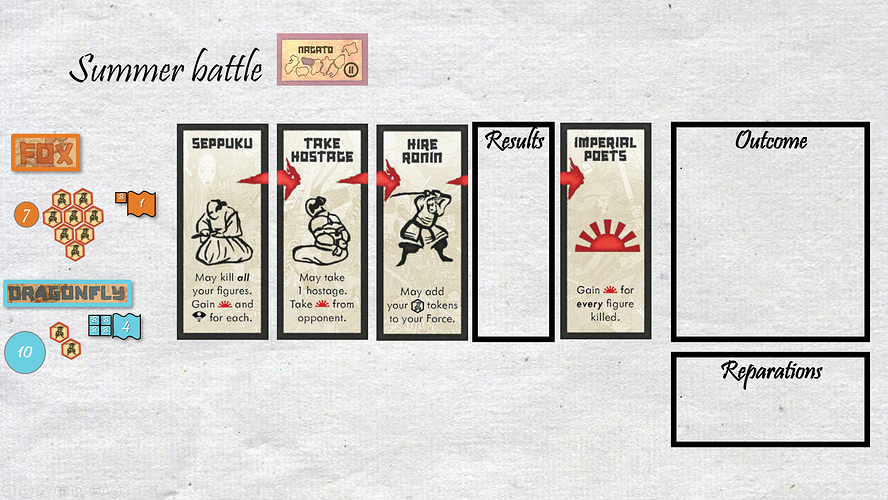 Not much to explain about this battle. Lots of Bushi and Ronin. Fox does have Righteousness, so +1 VP for each of his figures that die in any way.

It might be too late for this, but if you will take your Bushi in Kyushu elsewhere I will A) spend all my money on buying the Ronin in Nagato, leaving you to take the other options and B) funnel you the rest of my money as it comes in from my Way of the Merchant, since I will have no need of it.

Yeah I don’t know. I spoke it over with the bushi and the ronin and everyone’s feeling pretty good about Kyushu now. 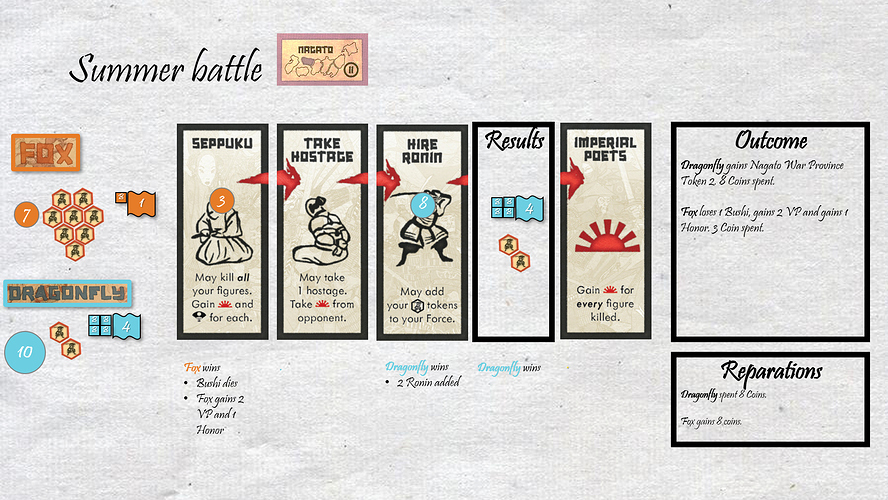 Fox declines to call on the great Ronin army and quietly Seppukus instead.

Dragonfly takes the province easily, though with a high gold expenditure. (Though they recover 1 coin from Way of the Merchant.) 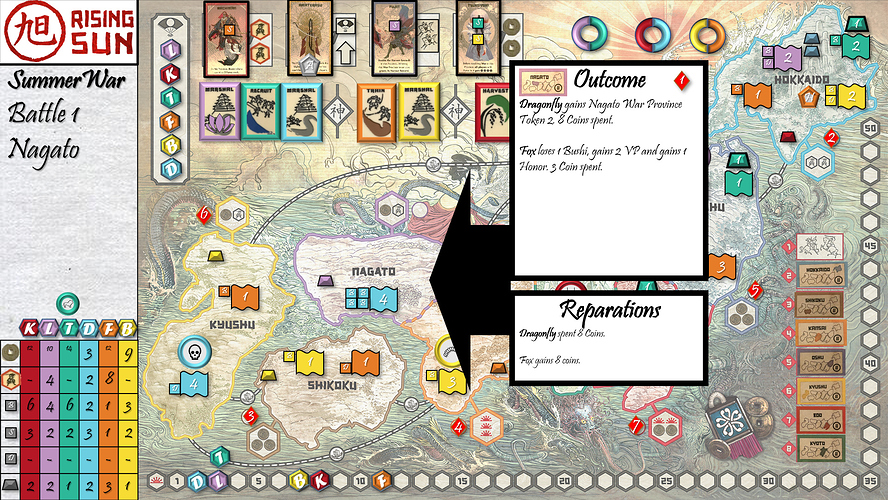 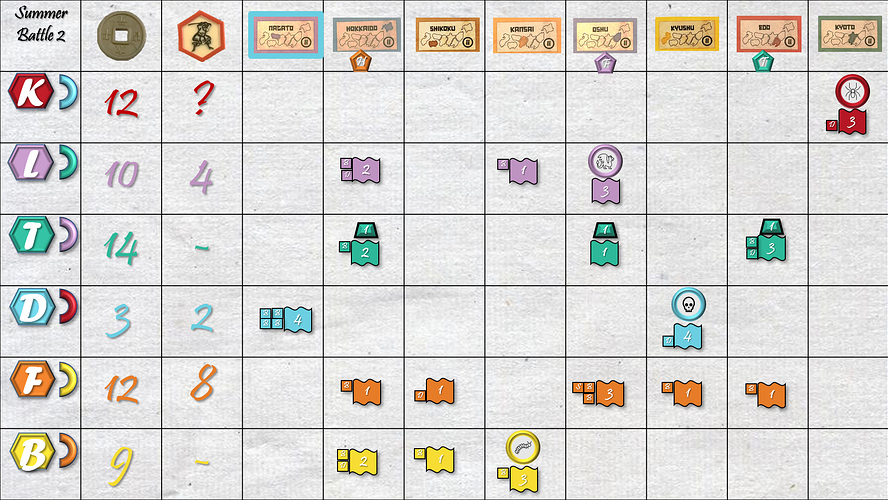 Battle for Hokkaido-- 2 allies versus 2 allies.

If you bid on Seppuku, let me know if you will do it or not. If you bid on Take Hostage, please tell me your target. You can wait until the outcome is known if you want to, but for speed reasons hopefully you will know before bidding. 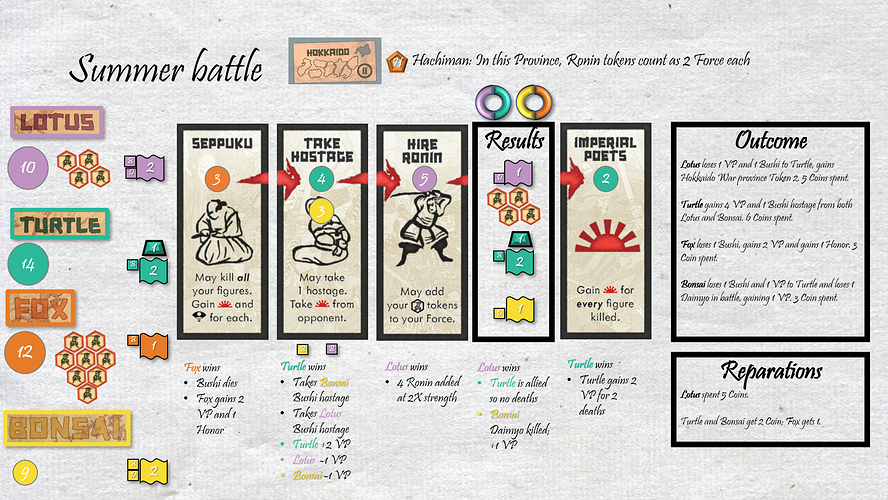 Fox wins Seppuku and does so, gaining 2 VP (bonus from Righteousness) and 1 Honor step.

Turtle pays more on Hostage, and using the Respect takes two figures hostage: 1 Bonsai B and 1 Lotus B, taking 1 VP from each rival clan.

Lotus fills the field with holy Ronin, who ignore the allied Turtles and swarm the lone Bonsai Daimyo.

War reparations were uneven, and Lotus chose to short Bonsai a coin. Dragonfly’s Way of the Merchant kicks in during reparations and grants them a coin as well. 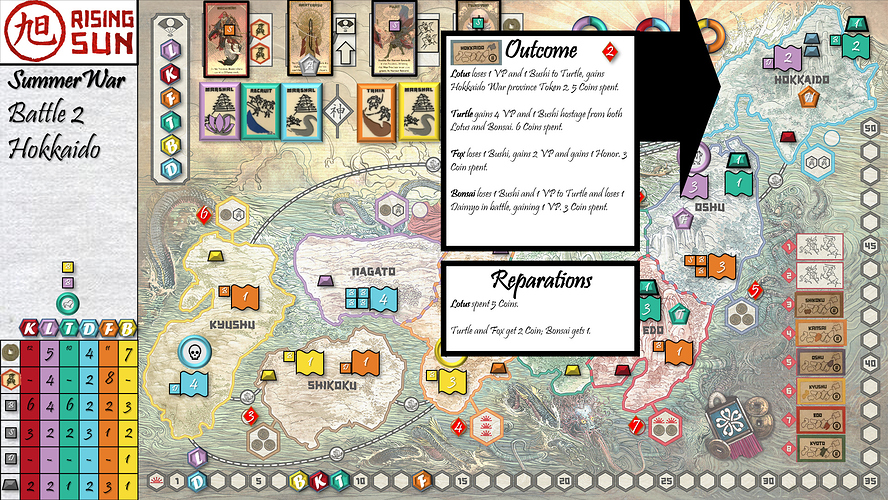 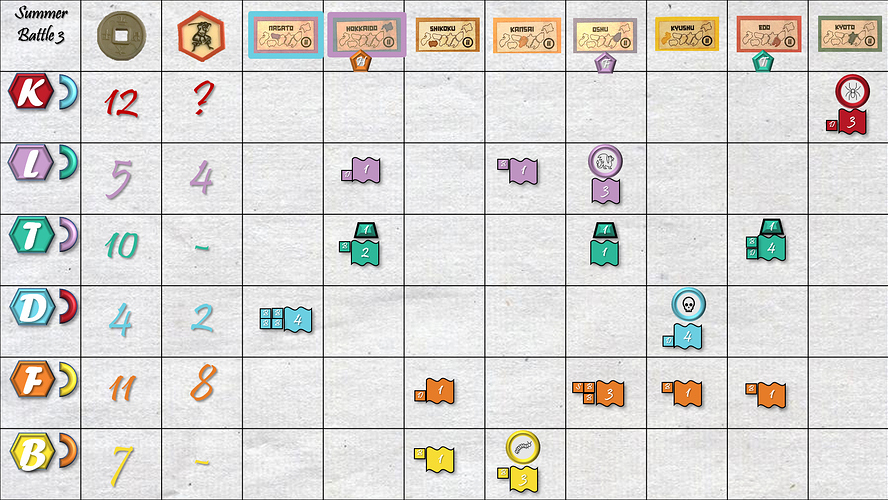 There is no battle for Shikoku. Fox and Bonsai are allied. They are tied at Force 1, so the tiebreaker goes to Honor. Fox takes the Shikoku War Province Token 2. 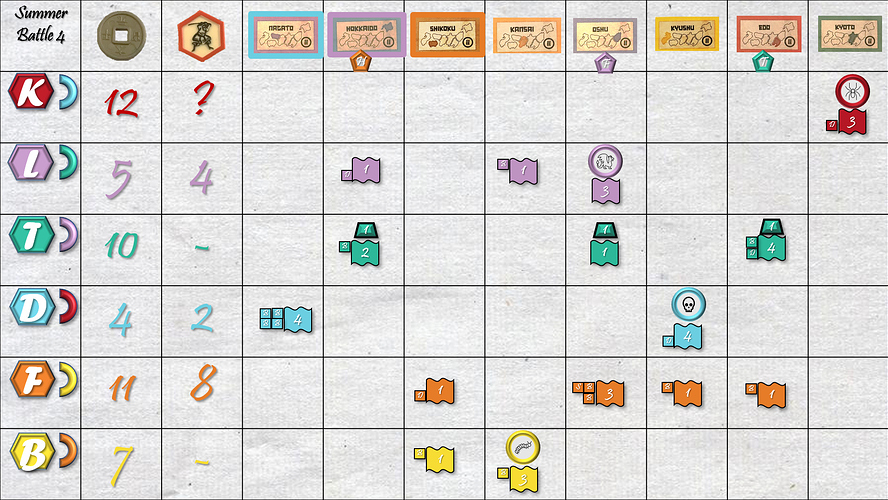 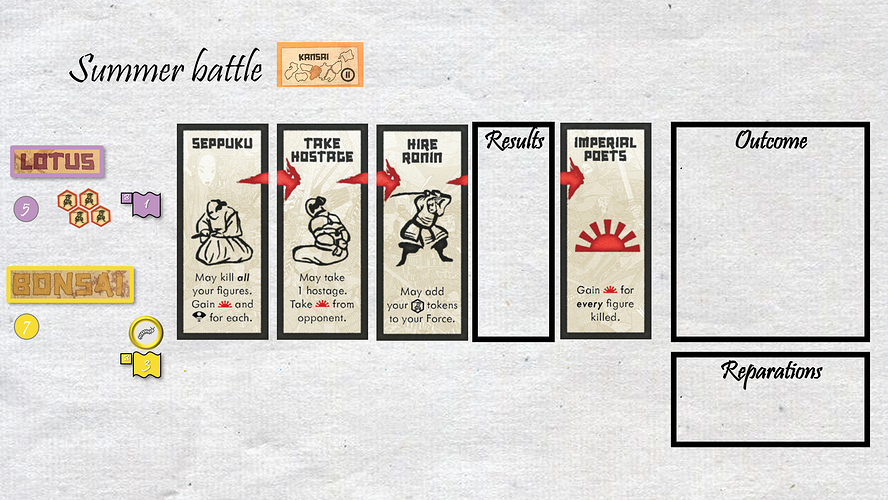 Notes for this battle: 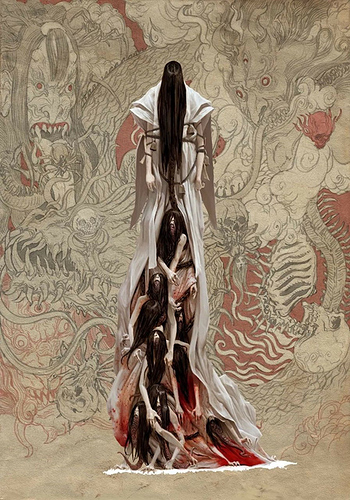