I wish there had been more randomization to the maps myself. But it wasn’t the end of the world. It’s a really fun game, I got a lot out of hit.

This is weird. The studio is working on Risk of Rain 2. It’s not going to be a side-scroller. It’s going to be a 3rd person shooter.

I’m into this. It already looks like the old gameplay translated well to this new style.

Excellent. I really liked Risk of Rain. Hopefully this will be good.

It’s going to be a 3rd person shooter.

Yeah, that looks great. Bring it on.

Looking forward to it.

Hope they keep the same type of music, Risk of Rains music was fantastic.

So apparently V2 is out in Early Access to big success (50k concurrent).

And the new one is just as maddeningly hard as the first one. In the best way.

Oh, forgotten all about this, but when I saw topic bumped I wanted to find my install to listen to the music.

Yeah my friends list activity feed is loaded with people buying it.

I think I played it for… 20 minutes before deciding it wasn’t my thing. So I’m not sure if that’s the ‘in the best way’, lol.

It’s not really my thing either (entirely too RNG dependent for a game of this type), but I was just gifted my copy. Had zero intention of actually buying it out of my own pocket.

I’m REALLY enjoying this. Such a fluid and well implemented 3d system from a GREAT 2d game. It’s got so much promise. a little light on content but the mechanics and the base game are totally there.

I was watching a stream and I was surprised, as it looked much better than Risk of Rain 1, in the moment-to-moment gameplay. I bought it with the intention of trying for one hour and then refunding it… and yeah, I can confirm, this is a much better game than Risk of Rain 1. Day and night.
I still refunded it because it’s EA, and I’m patient, though.

In RoR1 the movement felt slightly awkward, a bit slow and unresponsive, even in comparison with other 2d platform games, never mind a 3d action game. And the action was very limited, of course, and you couldn’t aim or direct fire in any way (despite WASD + free aim with mouse also possible in 2d platform, like other games have shown), the 2d platforms restricted your movement and how the combat could play and it was a pain in the ass to go from platform to platform with vines, etc.

RoR2 plays much better in 3d. Having an extra axis of freedom feels good both for the player, and for the enemies, know they move in more interesting ways than left<>right and their shots are more easily avoided. The controls are more responsive too, the animations of some skills don’t lock you out sometimes like in RoR1, and together a few more changes (they added a new sprint key, the gold coins are auto-collected) the game flows better. I also found that at least the weaker, initial enemies aren’t as bullet sponges as in the first game, a few shots and they are done, this also makes the action feel nicer, less of a slog.

And because with normal wasd+mouse controls it makes easier to translate your skills of other games here, I’m much better. In my first game I got killed after 26 minutes, while in RoR1 I was dead in 12 minutes. 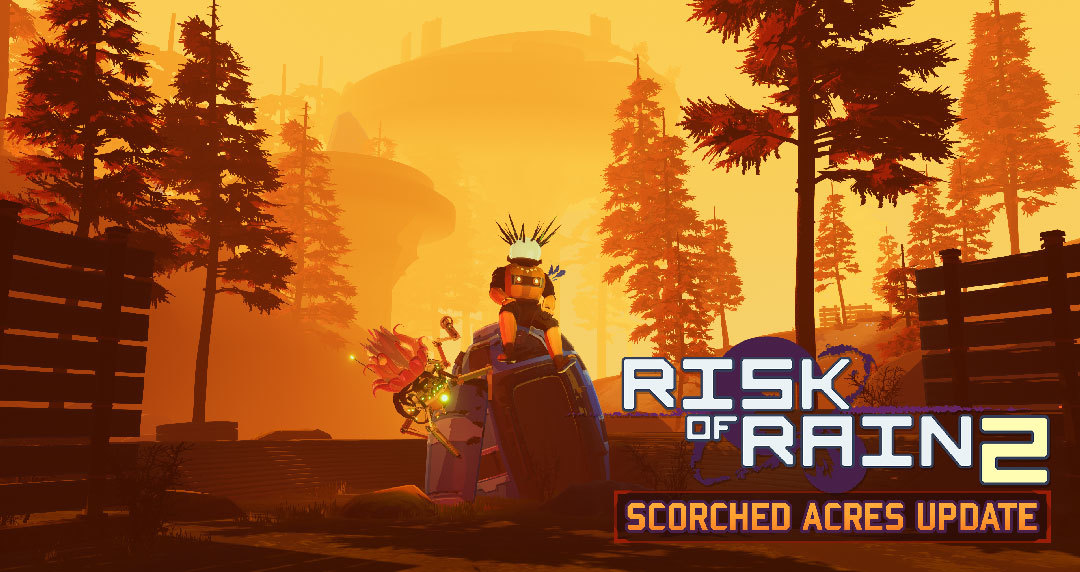 This is the first content update for Risk of Rain 2. With this update there is a bunch of new content as well as other general changes and quality of life improvements. Changes with the ‘☂’ icon in front of them are changes or additions suggested by...

Also the roadmap to 1.0 next year. 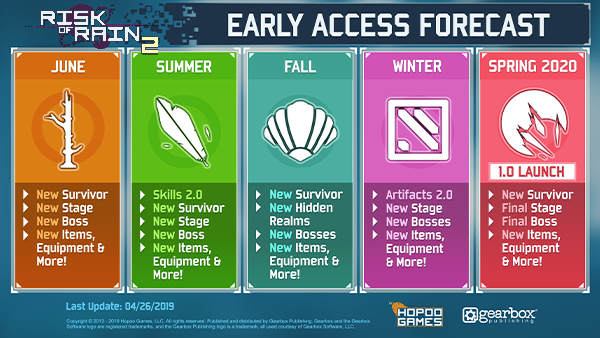 If only they had some bioware magic in Risk of Rain 2 so they could skip their plans and go straight to endgame.

Have some shitty bug in my RoR2 games where my progress gets slashed every time I restart the game.