What Kalle said. Rome TW:Gold gives you everything you need to experience the game to it’s fullest including the ability to run all the best mods. Alexander was really kind of a weird add-on, really more like a mod, in the way it totally changed the game’s dynamics and made it much more linear in my opinon, and as a long-time fan of the series I did not enjoy it nearly as much as the BI & VI (for Rome and Medieval I) or Kingdoms (for Medieval II) expansions.

I just bought this on Steam as well, indeed it was my motivation for joining Steam

Thanks Slainte and Kalle.

I played the original when it came out and just picked up gold on steam. Are there any really good mods out there I should try? I saw there is a Rome Total Realism mod, has anyone tried it?

The only time I load up Rome is to play the Europa Barbarorum mod.

I loved Rome: TW… I loaded it up recently though and was a little shocked at how poorly the graphis had aged. Are there any mods out there that soup it up a bit?

Time to remaster the thread I guess. Hefty 50% discount for being a previous owner of the original Rome: Total War (on Steam) makes it mighty tempting. Would imagine Medieval 2 could be on the agenda if this sells well enough, since there has been a vocal crowd saying they would buy a remastered version of the game. At the end of the day it’s Rome: Total War but the remastered graphics look like a decent step up, and there’s other changes to go along with those (e.g. improving camera\controls to be closer to modern Total War games).

Interesting. It’s been a while since I played TW Rome 2, but I wonder what advantages this remaster has over TW Rome 2.

I wonder what advantages this remaster has over TW Rome 2

Superior road building for one. :)

Yeah, but besides roads, what has TW: Rome done for us?

Don’t know, but for 15 bucks I’m going to find out. Been a long time since I ran thru a campaign in R1 and this seems like as good an excuse as any to fire it back up for a new one.

Hard to put a precise finger on why I enjoy unmodded Rome: Total War over it’s successor Total War: Rome II. Not a complete case of rose-tinted nostalgia glasses though since I have played RTW recently and still enjoyed it more than my time with Rome II. Maybe the launch state of Rome II just soured my perceptions of that game for eternity, the Emperor Edition was a good update to the game but ultimately I still found the game less engaging and duller than what came before it (Shogun 2) and the original Rome. 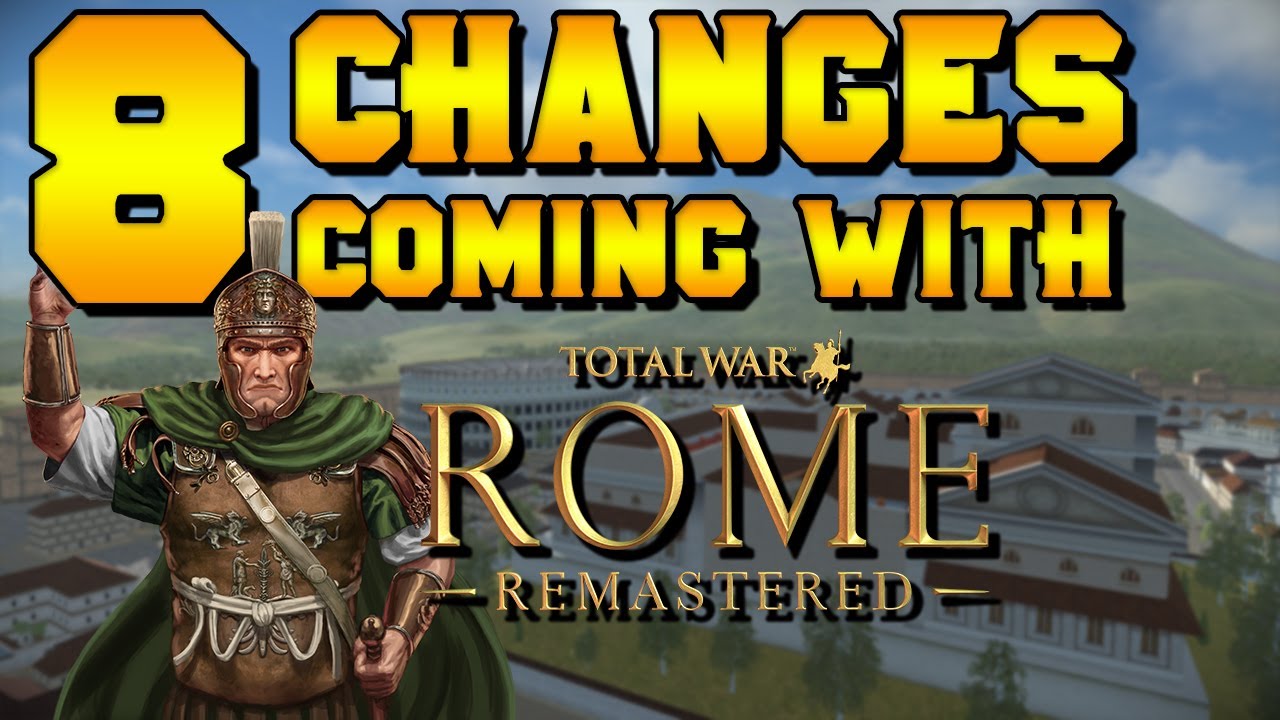 So I watched the video about the upcoming changes and while I know its not a comprehensive list one thing I was wondering was what they might do with the Wonders of the World mechanic that was in RTW but not Barbarian Invasion (and probably not Alexander, but like many others, I never got around to playing it).

The thing is that mechanic was so strong and made some regions, namely in and about Greece, just the place to go or start. Especially when playing at the higher difficulties, since that Statue of Zeus gave a significant global boost to loyalty.

If they include them, I do hope the AI realizes their significance and actually fights for them. It just seemed wrong to me to abuse those Wonders like I did.

Otherwise, I’m actually kind of excited to check out this remaster.

Should be interesting to see what kind of a mod revival it spawn for Rome. Especially with the news that Feral Interactive are lifting the hardcap on the number of factions and settlements the game supports. The freedom to include more factions and settlements should be a pretty good boon for the mod community. Now mod developers won’t have to make as many tough decisions about what factions to include on the campaign map and which to leave to being represented by the catch-all rebel faction.

The Europa Barbarorum team ruled themselves out of officially releasing a version for the remaster due to their focus on EB2 for Medieval 2. However, the Rome Total Realism team have already started recruiting for a Remastered version of the mod.

Feral Interactive already making use of the time before release to take on feedback and improve areas of the game. They’ve already added a Saturation slider in the options menu for people who find the colour vibrancy of the campaign map a bit garish. Also tweaked the UI to allow players to get an overview of the complete family tree as well, if they so desire. 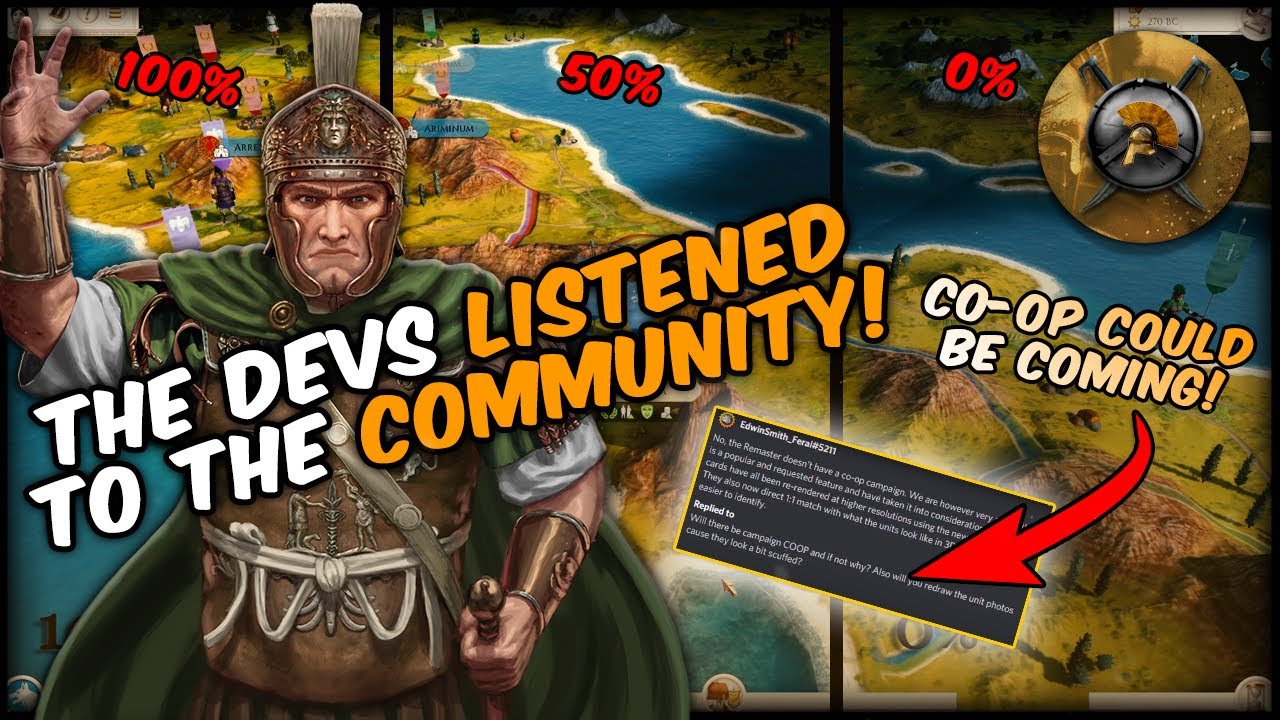 AI improvements are a bit harder to quantify currently but as you said, hopefully the AI is a more cognisant of defending Wonders that they possess.

Appropriate timing with the Remaster’s release date around the corner. This week’s Three Moves Ahead podcast episode is all about Rome: Total War with two special guests from Creative Assembly, whom worked on the original. Goes into CA’s culture of crunch, some of the financial challenges the studio faced, the slow-burning success of Rome: Total War, etc.

Thanks for the heads up, have to give this a listen. Looking forward to this one at the end of the month, not far away at this point.

Was certainly worth a listen to get an insight into the development of Rome: Total War and some tidbits about Empire, Rome 2 and Shogun 2.

Interesting to hear about how Rome was essentially the work of programmers and some artists due to the absence of a dedicated game design team, how closely development of Medieval was followed by Rome, some of the crunch and subsequent burnout the programming team experienced with Rome that flowed into Empire, how the shift from code-based unit actions to animation-based unit actions influenced the game, and some of the tribulations the art team had to go through to get assets into the game.

Perhaps the most intriguing piece of information I gained from listening to that episode of 3MA was just how quickly Creative Assembly managed to develop Total War: Shogun 2. In some ways I guess it makes sense given the tight geographical and thematic focus of the game and yet it still seems crazy that they turned out one of my favourite Total War games within a year.

Especially in comparison to the time it took to develop Rome 2 afterwards, followed by the time it then took to get that game into a satisfactory state after the disappointing state of the game on release. Though, it does tally with my opinion that some of CA’s best Total War games or DLC campaigns are the ones with a solid, tightly defined scope.

Was also intriguing to learn that Rome’s Barbarian Invasion expansion was led by their former studio in Brisbane, Australia. Guess I can chalk up another one of my favourite Total War games (expansion in this case) to the Australian branch of Creative Assembly, alongside Medieval 2 and its Kingdoms expansion. Shame they never got to lead development on another Total War game considering the number of different studios and internal teams CA has working on Total War content these days.