Roomba: anyone have one?

Anyone with one of these things able to regale me with some stories and their experience? Recommend against/for buying one?

Anyone with one of these things able to regale me with some stories and their experience? Recommend against/for buying one?

I have an older one and it worked well for what it is. Don’t expect a super deep cleaning but does a good job keeping the surface stuff picked up with little effort. Mine is kind of on the loud side - but that may have been improved in newer models, I can’t say - so running it at night (I would often set it to run as I went to bed) could be problematic if there are light sleepers in the house.

One suggestion I have is keep an eye on woot.com as they have deeply discounted roombas on there quite often (thats where I picked mine up).

Does an OK job on my wood floors with keeping the dust and dirt bits under control between more intensive cleanings. That said, I have been through three of them over the years and only my current one has held up well over time. The others quickly lost both battery life and cleaning power.

As stated above, don’t buy one unless you are getting a woot.com deal or similiar.

Bought this one. Costco has a forever-warranty so I should be good…right?

You fools! Roomba is Neolithic tech next to Neato!

Seriously though, the Neato is a miracle of engineering. They come up on Woot every so often for $300, I highly recommend it. However, if that permanent warranty is a real thing it might make more sense.

I have a Roomba and I absolutely adore him. I really can’t say enough good things about him. With the Roomba my cleaning time has been cut in half and the house is twice as clean. Seriously.

We got a Roomba as a wedding present four years ago. One of the better models. It fared Ok in our little condo… struggled with the dining room table and chairs, usually couldn’t find its way back to the dock. Emptying the tiny dust bin was a bit of a pain, but carefully removing the cat hair from the many rollers was a real pain. You had to do this frequently. I quickly gave up on it.

Three years ago we moved into a much larger house, and the Roomba has sat dejected (and continuously charging) for three years… The house is too big for it. I have “light posts” or whatever they’re called to limit where it can go, but, meh.

Edit - also with four cats, there’s always cat toys scattered about and they would get wrapped up into the Roomba and it would get stuck. This meant you had to basically pre-clean before the Roomba could start. Meh.

I would say the Roomba is OK if you have a small place with no shedding pets or long hair people.

I had a roomba for a while a couple of years ago, but I didn’t care for it much at all. As noted above, to keep it running smoothly, I had to continually clean hair out of wheels and rollers, which means that it doesn’t quite fulfill the hands-off cleaning ideal. If you don’t have long hair, it might not have this problem. I get the impression that it deals with just plain dust pretty well.

Also, in my case, it would constantly get stuck or get lost on it’s way back to the charging station. I live in a relatively small apartment, so it’s packed pretty tightly with furniture, so there’s a lot of obstacles to navigate around. But even something so simple as navigating my kitchen table and all the chair legs made it crap out.

Speaking of the charging station, it also never seemed to be able to dock properly. The roomba would knock into the station instead of docking into it, which would slide the station around, or knock it out of alignment. It would do this for several minutes before giving up. Eventually, the battery pack died, and buying a new battery pack was almost as expensive as the whole thing, so it wasn’t worth it, and it eventually went in the trash.

Maybe they’ve gotten better, but when I got mine, everybody said “oh, they used to always get lost / stuck, but now they’re better”, which clearly wasn’t true, so I’m skeptical of any additional claims to that effect.

That being said, they are adorable.

I would say the Roomba is OK if you have a small place with no shedding pets or long hair people.

We had several. The good folks at iRobot replaced several batteries for us and the units themselves where cute and adorable and we got to have robots and all that…

But we with two cats in the home and several long haired humans, it got to the point where every time a Roomba ran it required intervention from a human to clean it out. This was not the hands free experience that we were looking for. Eventually it got easier to just run the regular floor vacuums on our own schedules.

We also had a scuba for tile floors. I really wish that thing had worked well, but it left a ton of water on the floor and eventually we got rid of it as well.

Wonderful idea that just didn’t work out as well as we had hoped. They have a unit that will cut grass. I hold out hope that eventually…

Wonderful idea that just didn’t work out as well as we had hoped. They have a unit that will cut grass. I hold out hope that eventually…

Right, because of all my problems with the Roomba, the biggest was that it didn’t have enough spinning blades. Yikes.

It’s not really “forever warranty” but return at any time for exchange/money back if dissatisfied except for electronics due to idiots who abused it around Super Bowl time. That’s been cut down to 90 days now. 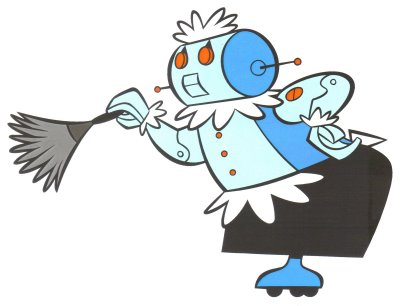 I’m going to name mine “Tachikoma.”

I would guess that you’re gong to need a regular vacuum.

I’ll reiterate the experience most people have had. Too much hands-on effort for a hands-off solution, because manually removing hairs and other bits of crud from the roller is self-defeating for what the thing is supposed to do.

If you had a small room that you naturally kept clutter-free and you have no furniture that is a certain height that Roomba can get trapped under, and if you have no shedding pets and no source of long hairs, I’d theorize it would probably do an okay job.

I also had a Scooba. It takes quite a bit more set up and cleaning than the Roomba and leaves the floor wet enough that you feel like you ought to mop it even after it’s “done.” If you have tile or hardwood the Scooba will leave solution in the grooves. I would not recommend it. You could clean the same space a Scooba will do with a Swiffer Wet-Jet in less time than it takes to set the Scooba up and clean it out, and the floor would look twice as good when you were done.

I’ve had two, both died within a year. Would never buy one again. Think it’s probably my girlfriend’s long hair that does them in - we were pet-free until recently.